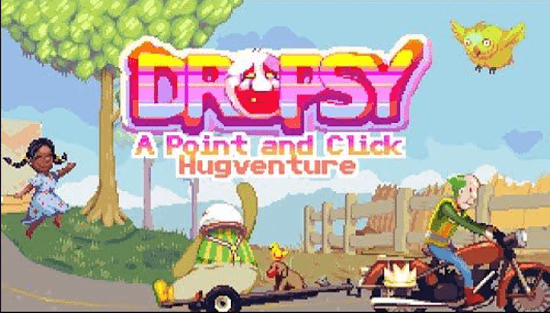 Well, it finally looks like the game about a terrifying clown with a golden heart is out with a full release. I previously covered the game in a premature evaluation here. In my assessment I noted that Dropsy was a game which had a lot of heart and offered one of the most optimistic video game protagonists I have ever played. If you want to see if this holds in the full release of the game, read on… 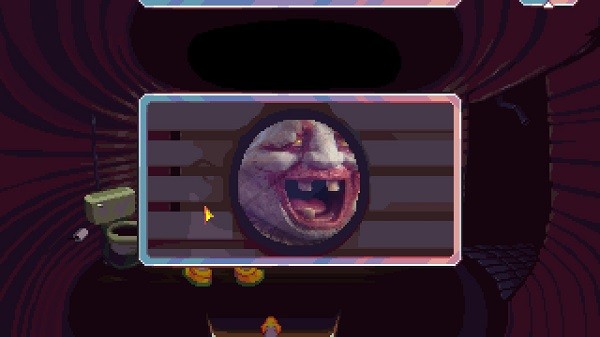 The game follows the eponymous protagonist, Dropsy, as they go about their life. Many years previously, Dropsy’s mother died in a circus fire which many people believe Dropsy himself had started. Most characters react to Dropsy with either fear or revulsion, as he smiles his terrifying yet innocent smile. Although Dropsy always presents this veneer of happiness to the outside world, his subconscious still terrifies him with nightmares of the circus fires so many years ago… and that is where the game starts. 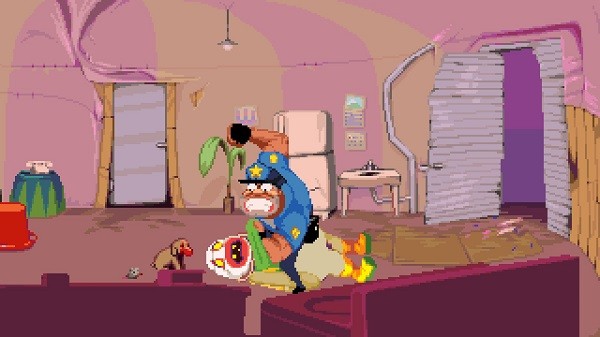 This game oscillates between very dark and very sweet scenes. As I mentioned in my preview, this game balances out the inherently positivistic nature of its protagonist by having him confront some pretty heavy themes. Whether it’s helping a grieving widower, reuniting estranged family members, or confronting the scene of a mass grave; Dropsy will do it all with a smile. It’s a good way from preventing the game from feeling too wholesome but also to highlight the positive interactions of Dropsy. It is certainly a rollercoaster with highs and lows and I can’t recommend this aspect of the game enough.

The third act is a jaw-dropper. It comes out of nowhere and just does not stop throwing curveballs. I’m writing this within an hour of finishing the game and I still haven’t processed exactly how it unfolded. Don’t read any spoilers. Just play or watch the game and experience the ending for yourself in all its mercurial glory. It only takes about 5 hours to get through the whole game (which includes getting stuck on various puzzles) so it’s also perfect ‘youtube fodder’ if that’s your interest. Short and bittersweet. 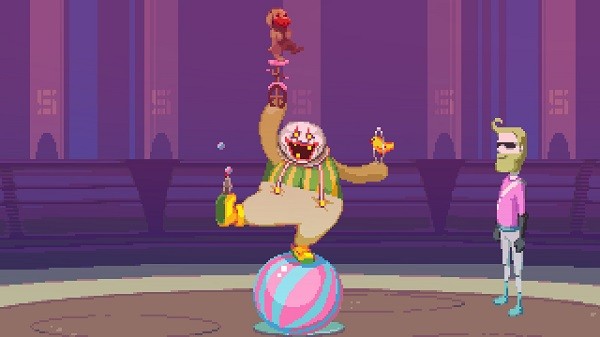 The entire story is also told without the use of any dialogue or legible written word throughout. It’s an interesting design choice for an adventure game especially, as in most such games dialogue is used to give the player hints about puzzles that they might be stuck on. Instead all information is conveyed through pictures which represent various concepts and items, which you’ll learn to recognise fairly quickly. It’s a testament to the developers that I didn’t feel that communicating to the player in this was limiting to the story.

The gameplay itself largely revolves around solving various puzzles to either obtain new items, move the plot forward, or make someone happy (and then hug them). It’s typical old school adventure game design which has you travel to various parts of the game world and try to figure out what puzzles. Your reward for solving these puzzles sometimes includes a new item or interaction which generally helps you solve another puzzle. Another reward, which is little less tangible, for making people happy is that Dropsy will draw a crayon picture of the individual in question and put it up on their wall. I found this to be one of the most adorable methods of keeping track of progress within a game. It is details like this which give Dropsy its charm. 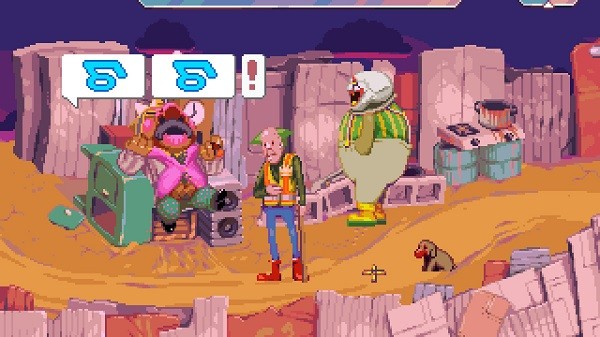 Most of the time, I could suss out exactly what was needed to get from point A to point B, but there were a number of instances where I got stuck. At a number of points, I felt that my (largely) logical solutions to the puzzle were being quashed in an unfair manner. Having to consult with a guide, however, I came to realise that these few roadblocks were largely the result of incorrectly interacting with an object or person and that my original solution was actually correct. There was one instance where I couldn’t quite see the true, multi-purpose nature of an object and literally guessed the correct outcome through brute forcing a solution. To help combat these problems, the developer is diligent in doling out hints upon the steam forums and if you have any problems then I’d recommend having a look there. 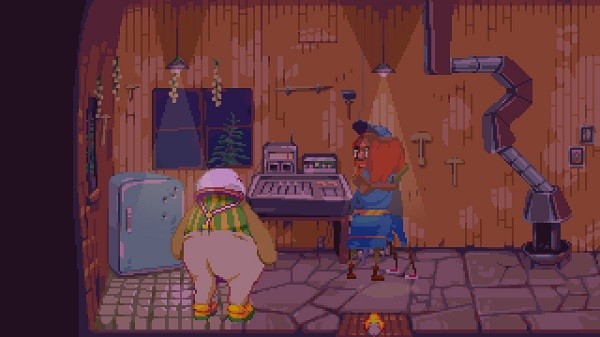 Dropsy’s leisurely pace around the map can be infuriating in the first act if, like me, you got stuck on one of the earlier puzzles and then scour the world trying to find a solution. Luckily, a method of fast travel becomes unlocked fairly early in the game but it’s still a little annoying to get Dropsy moving from one side of the screen to the other. I feel it would have been in the game’s favour to have a method of speeding up this traversal, but I feel that this might diminish the impact of some of the later scenes in the game.

The game follows the trend of having a retro-pixelated aesthetic in the vein of classic adventure games. The world itself is varied from decrepit urban environments, to alien forests, dank mines, and churches dedicated to a vampire-slaying Thor. The visual design of Dropsy also has invoked a certain revulsion in me the first time I played the game do his character design reminding me strongly of ‘Pennywise’. Like me, however, you’ll probably learn to look past that aspect and see the good within. 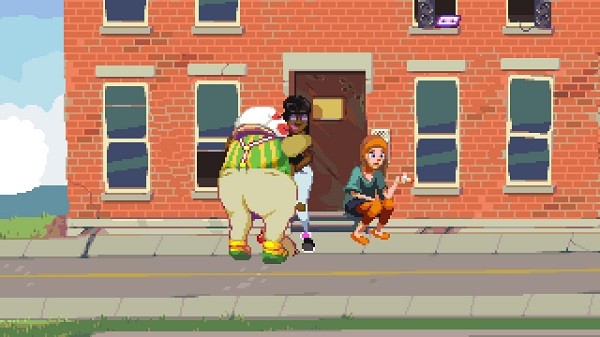 Largely, the visual design is quite pleasant and charming. There was one instance where, due to lack of visual fidelity, I couldn’t quite see the true nature of an object properly as it was difficult to make out through the pixels. I’m not sure if others will have this same problem but it was annoying when it happened to me.

The soundtrack throughout is vibrant and eclectic. There’s everything here from hard rock to classical music on hand with a pixel-tune twist. The catch is that you receive these tracks in-game by finding cassettes hidden around the environment. Furthermore, they are only diegeticaly played when you play them on a cassette player in-character. This is a shame, as I quite enjoyed listening to this tracks. 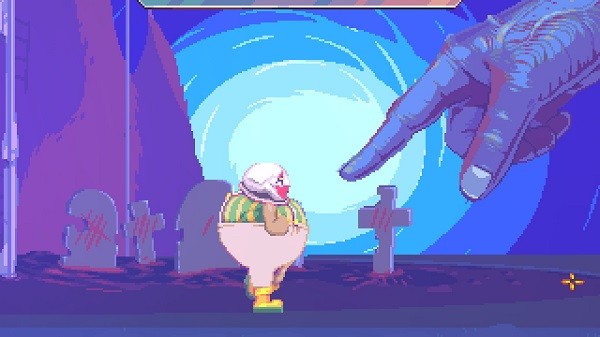 The dreamscape scenes also feature some interesting melodies and soundscapes. Everything you hear is distorted and helps to reinforce the otherworldly feel of these sequences. The dreamworld version of the Dropsy theme from the trailers is also sufficiently unsettling in its reinforcement of this uncanny space. It’s creepy, but pretty beautiful… just like the rest of the game. 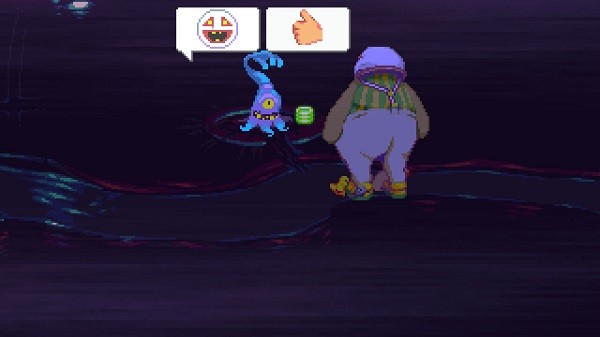 Overall, I am quite pleased with my experience with playing Dropsy. The story is overwhelmingly touching with a rollercoaster ending that comes out of left-field (but doesn’t spoil the overall experience). The puzzles are largely intuitive and can generally be solved if you’re stuck by simply interacting with your (likely) solution in a different manner. The visuals are quaint but sometimes problematic and the audio is pretty darn swell. I have no problem with recommending Dropsy to pretty much anyone who thinks they might like it (and to some who don’t). I honestly didn’t think I would like it as much as I did, but I guess the terrifying clown worked his magic on me with his “warm, greasy hugs”…