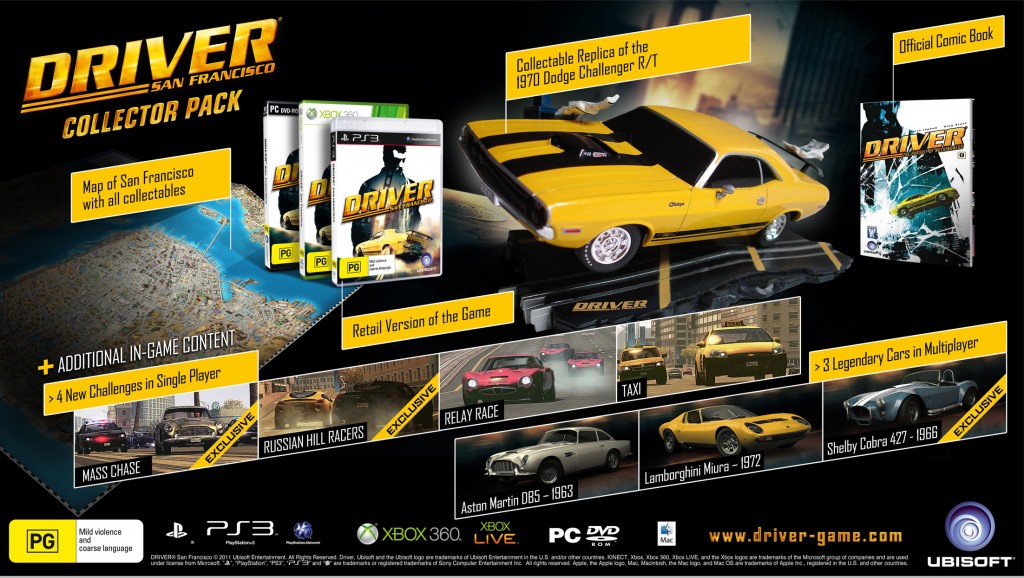 Ok I’ve been a little busy lately doing some major work in the background at Capsule Computers (an Editor-In-Chiefs job is never done) but YES MasterAbbott is back with another of his World Famous Unboxings.  This time we have UBISOFT’s – DRIVER SAN FRANCISCO Collector Pack (Collectors Edition).  I gotta say if your a fan of the Drivers series this is quite a nice little collectors edition to add to your Driver collection. The star of the show is the finely detailed 1970 Dodge Challenger R/T replica.  To my surprise, when I held the little yellow bundle of joy in my hands I felt relieved that it wasn’t made out of plastic which I thought it would of been, but in fact was made out of some sort of metal, not sure what type (i’m waiting for the results to come back from the lab) But anyway, I can safely say that i’ll look really good on display cabinet.  Along with the Dodge you also get the official Driver comic comic book, game content and a map of San Francisco that contains a list of all collectibles and also doubles up as a poster.

NOW the million dollar question… What do you expect to pay for all of this.  Well in the land of the rising Kangaroos and Koalas, Driver San Francisco weighs in at a massive $130 AU.  A little too expensive for some, well maybe most of you out there but if you’re a hardcore fan of the Driver series you’ll find a way to come up with the cash.  The 1970 Dodge Challenger R/T  is so awesome its worth at least $50 on its own if you had to buy is separately.

Enjoy the video unboxing.  Any questions feel free to share them below, if thought it was good subscribe to the Capsule Computers channel on YouTube for all the latest in the world of video games and entertainment 🙂