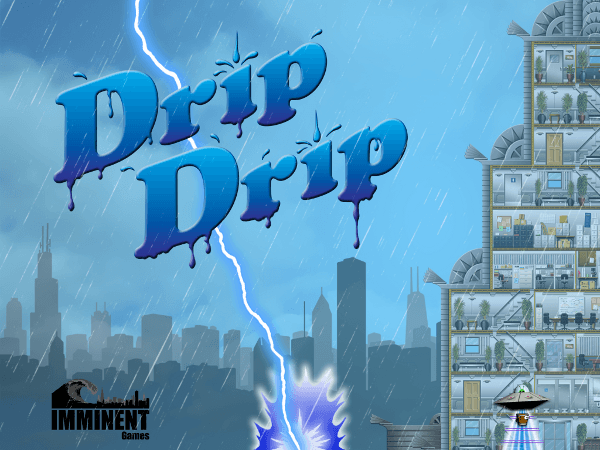 Casual games really only need to do one thing – be addictive. Sometimes I wonder if they’re specifically targeted to be competitors to soapies to suck in the much coveted stay at home parent/disaffected student demographics. What ever gimmick they use to get you over the line, flinging cute objects at ugly ones, generating great speed or simply tapping at stuff, the genre demands above all else a slick execution. Here we have a game with a pretty absurd gimmick – use sentient crockery and house hold items (wizards are house hold items, right?) – to stop storms from destroying houses from across the USA. Inasmuch ‘Drip Drip’ is a success, but will mummies across the nation take to game? 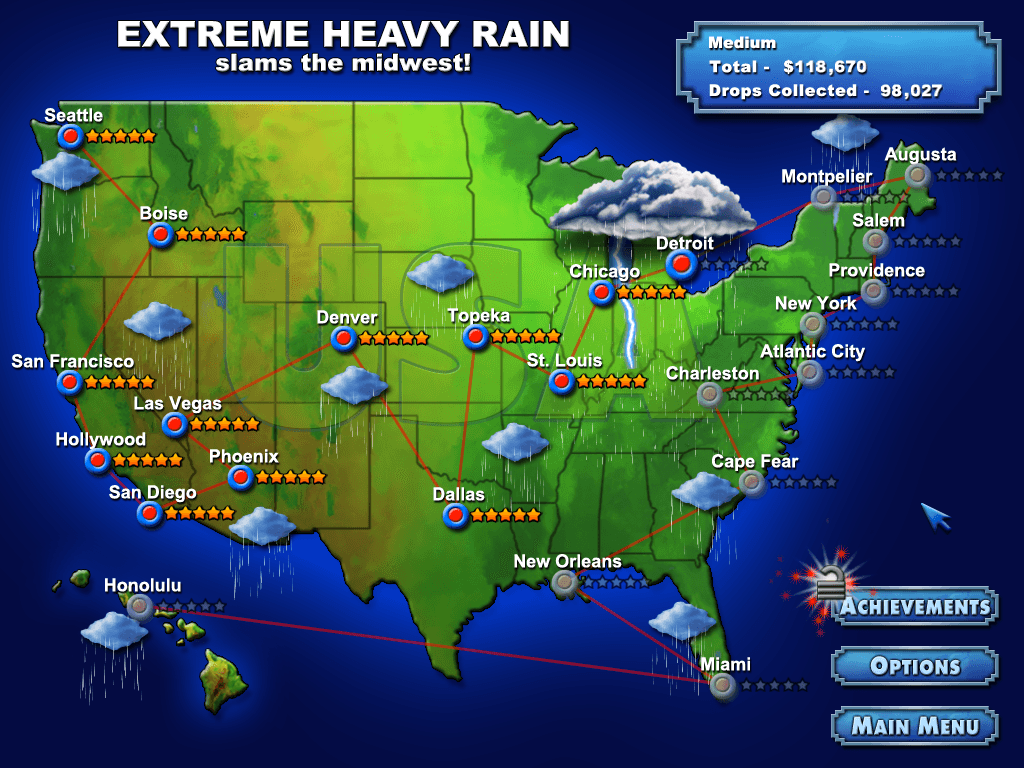 You’re from elite drip collector based in the United States. I had no idea that was a job. I want this job so bad. Well, I thought I did, but the amount of complete wrecks you have to help save makes the role seem far less glamorous that the title makes it sound. If only I could be elite at something. I digress, but to be honest that’s the whole story.

For a while there I wondered it there was a social commentary sitting behind the window dressing here. Maybe a climate change angle? Perhaps something about poverty in a post-hurricane Katrina America. I thought it was that one for ages. Seriously, why did we have to fix half these places when they were obviously health and safety hazards. Did these building have heritage listings? Were they the birthplace of some historical figure? In that sense I guess it had a deeply implied narrative in there somewhere. In a far more literal sense you’re just a dude fixing stuff before it breaks.

Does this game reach the standard I previously set for casual games (i.e. to be addictive)? In a word, yes. The developers at Imminent Games have done their research (or watched that episode of Extra Credits about the Skinner Box). Rewards will keep you around long enough, giving you the full tool box of abilities toward the end to dominate and feel pretty good about yourself on the two lower settings. Simultaneously, you’re going to have to master the game in order to get all five stars for each level.

Stars  are not just given for not screwing up too bad but are attached to specific achievements such as keeping the basement below a quarter capacity and making sure you’ve dumped all the water before game’s end. You can tell they’ve used this with the intention of tweaking the game play to keep you on your toes. For example, the dumping all the water before the level is over mechanic seems simple enough, but certain leakage types, like water that is seeping between floors, keep leaking after the rain has stopped. Even though you may have dumped the water out, the bucket will return to its previous resting place and may ruin your attempt at a perfect score. 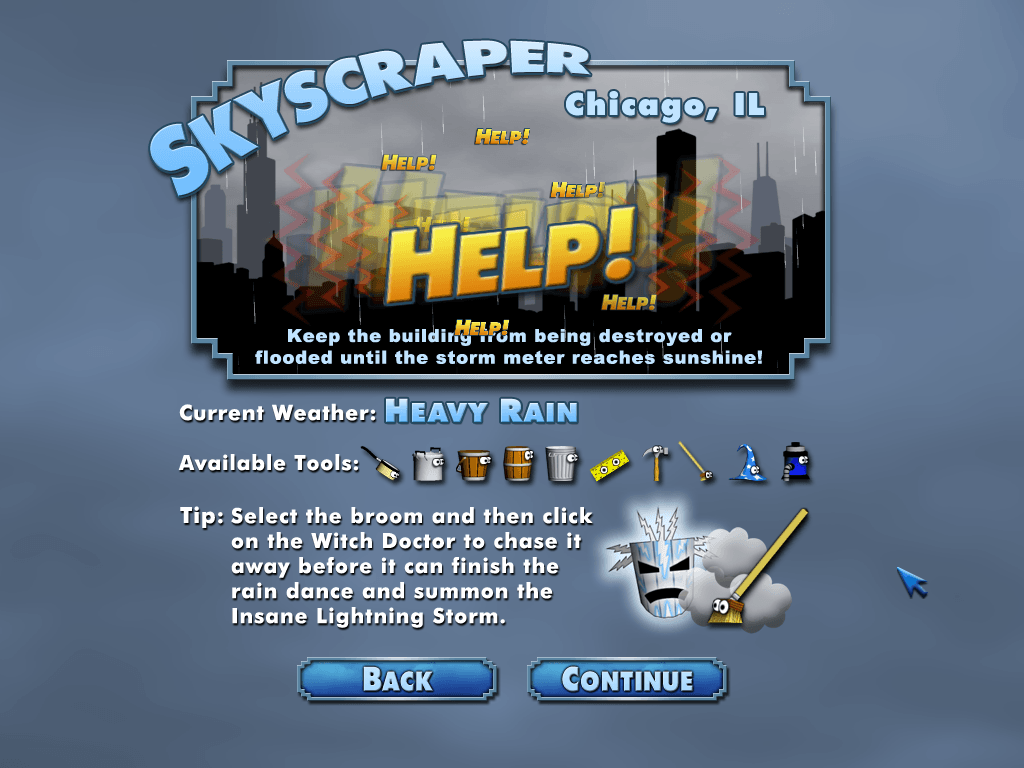 While the gameplay is considered, it isn’t complex. Unlike other casual games, such as Angry Birds, the mechanic is both simple and complex. Or put more accurately, the game is complex because the mechanic is simple. Drip Drip on the other hand is so boxed in with its functionality there’s no room for interesting emergent gameplay. The difficulty ramps up as the set pieces gain complexity not because you’re required to learn more techniques. Perhaps this will impact how replayable the game is after your first playthrough if you aren’t addicted to maxing everything out.

I think the stand out achievement for this game is that it’s complete. It’s a whole device drawn out in all the ways they could have conceivably created for a game about collecting water. Drip Drip pays attention to the details it considers being worthy of including and that’s fine. In fact, it’s a better achievement than some AAA games manage but they’re dealing with a whole other world. There’s a lot here to do but not as much to sink your teeth into.

I want to say the visuals are crazy but that’s not quite right. Maybe strange? The whole aesthetic is well executed but the paraphernalia associated with this world just doesn’t work for me. Anthropomorphic stuff is usually cute and that’s definitely the style they’re going for here but I just don’t find brooms with googly eyes appealing. It feels a little off kilter without any creep factor to make up for it. It’s well executed and this may just be a personal taste thing here. The game is about collecting water from houses that are being flooded so what could I expect?

Most enemies and traps look cool and are animated well. The ghost looked like they didn’t even try but that’s splitting hairs. A lot of the choices just didn’t make sense, especially when they could have had the same impact on gameplay if they chose something else to represent that impact. Lightning, sure that makes sense. A lightning god that looks like Moses from South Park? I’m not so sure. Why do aliens care if a happy little bucket does or does not dump water out of a window? I guess the sight of a living bucket is strange enough to warrant a probing though. 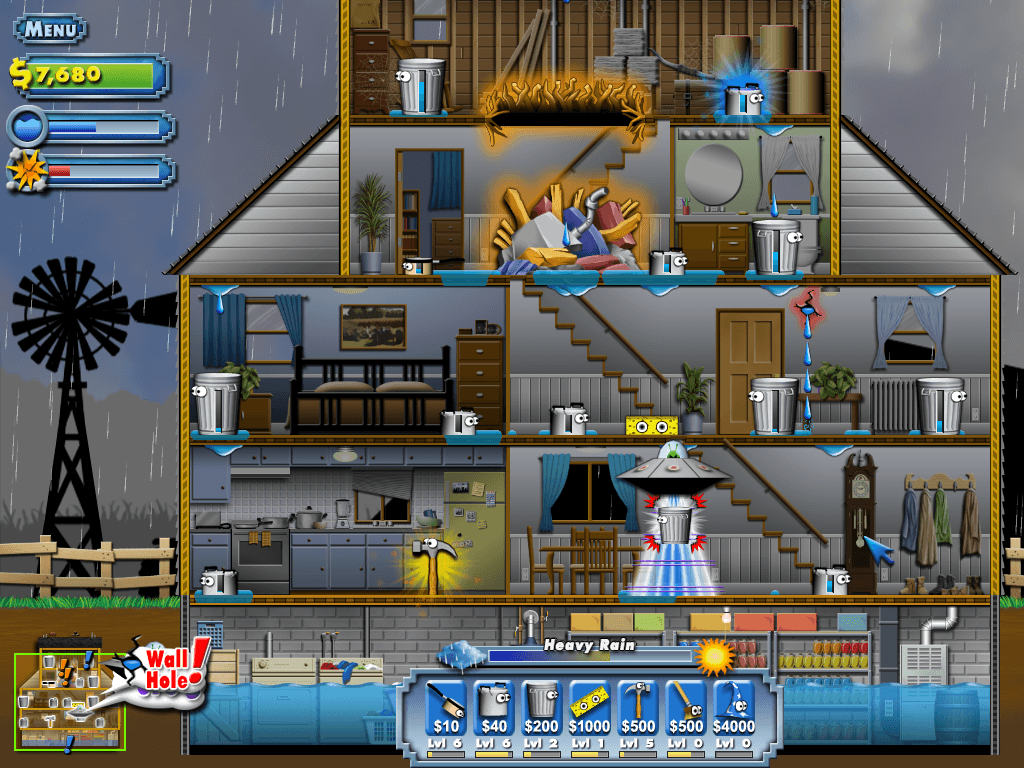 The audio is exactly what you’d expect from a game like this. It’s well synced, gives you a satisfying sense of feedback and alerts you that stuff off of screen needs attention. The sound of rain pouring is always soothing, and made me kind of sleepy a few times. After you finish getting 5 stars on each level you could use the title screen as a sleeping aid. Outside of that there’s not much about the audio that brings this game to the next level. It does the job that’s required of it and it does it well.

Casual games are a fickle beast. Separating greatness from another solid addition is a fine line. For me, that fine line is being so simple that it’s almost primal. Drip Drip is too closed in how its mechanic can be applied to get to that level, yet it sure is solid. The game does have its quirks though. Am I the only person who can have an existential crisis while playing a casual game? Why am I repairing all these houses that have clearly been abandoned for years? How many talented drip collectors were pushed aside so that I could reach the top of the pile, to be one of the few elite? If you want to tap away the hours in front of your screen or hammer out a level while you wait for the bus you can get a lot of mileage out of this game. I just don’t too many people coming back to it after they’ve finished all the levels.