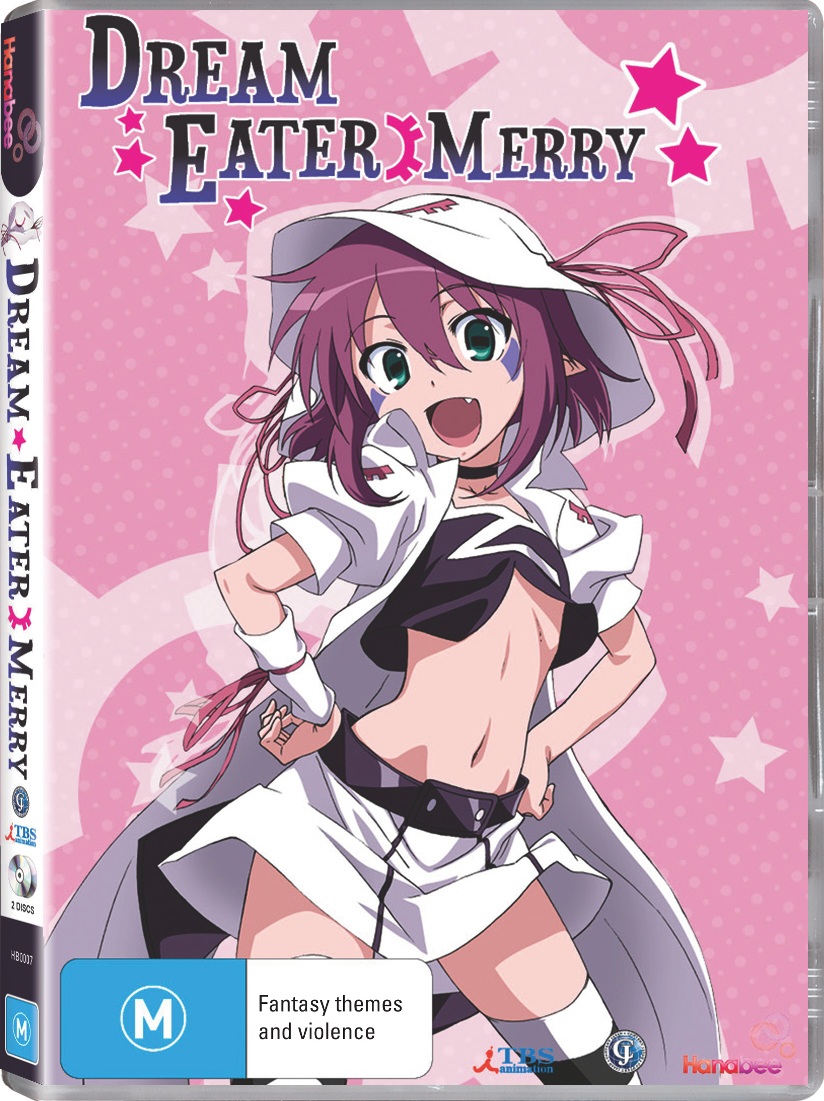 What if your dreams were actually a gateway to another reality? What if, sometimes, the things from your dreams wanted to come out into the real world? Well, this is the concept of Dream Eater Merry.

Yumeji is just a normal guy with the unique ability to see the kinds of dreams other people are going to have, but his world is changed when he meets Merry Nightmare, a dream spirit from another world. This other world is the Dream World and she is looking for a way to return there.

Is this concept a well done one? Or is it a little stale? Find out in our review below.

Dream Eater Merry follows the battles of a Spirit from the dream world named Merry. She has somehow ended up on Earth and is searching for a way back to her home in the dream world. Of course, as the story progresses, you do actually learn how it is that she got into the real world. It makes for a pretty interesting story.

What I really liked about the story was how right at the start of the series, you think that it’s pretty much going to be a one way kind of deal. What I mean is that it is initially presented as though its some kind of action show, but it very quickly becomes a little more complicated than just defeating the bad guys each week. 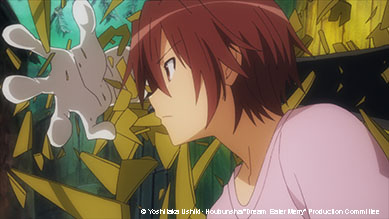 The character progression in Dream Eater Merry is pretty good. The characters at first appear to be quite one-dimensional, but as you advance through the series, you get to know them a little better as they progress through the story. This is always a good thing for a series to have as relatable characters make as remember a series more fondly.

Another thing that I liked was that the combat had an impact on the story. What I mean here is that you see early on that Merry believes that she’s doing a good thing by defeating all of these dream figures. However, this is proven not to be true and that all she is actually doing is murdering them.

Overall the story in Dream Eater Merry is quite interesting and it does a few things that really push it that way. I’d really recommend for anyone to give it a go based on story alone.

When I first took a look at the cover of Dream Eater Merry, I really thought that this would be a really generic looking show. I’m glad that I was wrong.

You see there are a lot of elements to the show that are present within the visuals. For instance, each dream demon has their own dreamscape with their own distinctive looks and feels. This adds a real visual flavour to the series, as opposed to just having standard environments which would have only added a standard flavour. 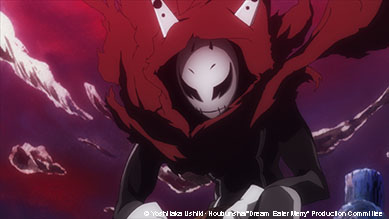 I actually really liked the individuality of each dream represented within this series. I think that each dream realm spoke a lot about the character having them. This isn’t really a direct thing though, you’d have to kind of know what the character is about to be able to see why they have a particular dream. For example, there is one girl who seems pretty normal, but you can see that she’s actually really lonely because her dream has given her a romantic companion. The show shows this visually and it makes the whole situation more personable as a result.

Dream Eater Merry has an amazing audio component, if you’re watching it in Japanese. I mean, like, the background score and sound effects are all the same between both dubs, but the English really seemed lacking somehow.I’m not going to say the English dub was flat or that there was anything wrong with it, but it just felt like the Japanese dub was much more rich and vibrant, creating a better feeling show. If you’re someone that can’t stand Japanese audio or read subtitles all too quick, you’re not losing anything by sticking with the English dub, I just really preferred the Japanese dub over it.

The background score captures the scene really well in this series. In battles it is quite dramatic and something you’d associate with a fight, whereas in other softer scenes, the audio carries across that feel as well. It’s not perfect, but it’s not something you’d really complain about.

Like most series, Dream Eater Merry hosts a plethora of sound effects. Each sound effect fitted a scene quite well. Not really too much to say here, the sound effects worked. 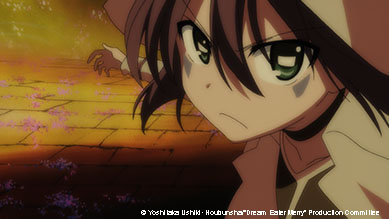 Dream Eater Merry lists two extras available within the packaging. These extras are pretty standard in Anime packages, so you might be a little disappointed.

Included with the discs are the Clean Opening and Clean Closing sequences. Fortunately, both songs are quite enjoyable and the animations are really cool to watch. You should definitely watch them.

As for unlisted extras, there are some there. The most notable of which is the reversible cover. The standard packaging of Dream Eater Merry is this pink colour and might look out of place on some Otaku’s desks (not that I care, pink is one of my favourite colours). However, you can flip this onto the otherside to reveal a greener cover, comprised mainly of green. A reversible cover with two of my favourite colours? Heck yeah.

Overall Dream Eater Merry is an entertaining show that may change your perceptions of your dreams. The storyline is fairly entertaining and far more involved than I actually spoke about (I really don’t want to spoil this too much, which is why I was so tight lipped up there) and it’s strong visuals make this a series that you’ll definitely want to check out.