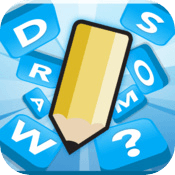 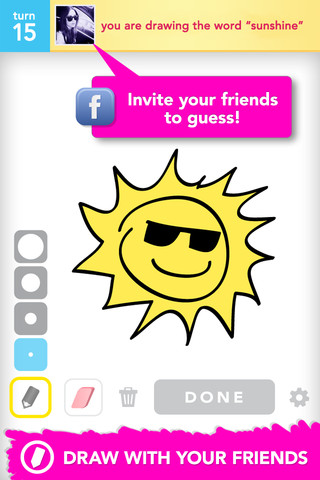 Draw Something is a multiplayer-only portable version of OMG POP’s Draw My Thing Facebook application. This in turn is based on the simple, yet hilarious fun of the game Pictionary (yes, a game that you play face-to-face with other people and not using some virtual device or other).

For those of you who may not have played any past iteration of Pictionary, it’s a game that involves one player being assigned a word and having to draw it out so that another player can guess what it is. In the case of Draw Something, it involves choosing one of three easy, medium, or hard words. The harder the word you select, the larger amount of coins you’ll receive if the other player guesses correctly. Rounds proceed only when both players have drawn a word, so depending on how dedicated the person you’re playing is, you could play one round of Draw Something every ten minutes or only once a day. After the drawing round, players will then go through a guessing round, where they’re provided with the number of letters in the word they’re supposed to be guessing and with a bank of letters from which they can drag the correct ones and put them in the right order to produce said word. Again, you’ll have to wait for the other player to finish up guessing before you can move on to the next round.

To the game’s credit, there’s a wide variety of words, including everything from basic, everyday items to celebrities such as Lady Gaga. 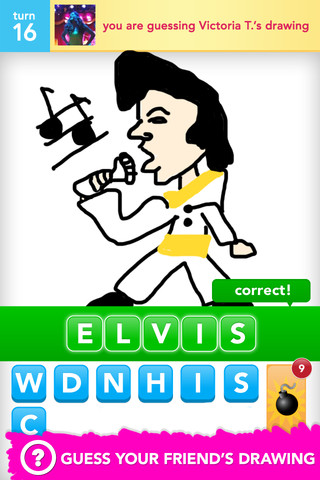 The aforementioned coins can be used to purchase new colours for drawing or to blow up some of the incorrect letters placed within the letter bank to aid with guessing. Aside from winning this in-game currency via playing the game, you can also lay down some real world cash to garner more coins through in-App purchases.

So that’s how Draw Something is supposed to play, and then there’s how it actually plays. When you start a game with a random player you’ll find the usual issues associated with Internet anonymity: stupid people and trolls. There are a lot of people who will simply write out the word so that you guess correctly and they can get the coins from hard words, and then there are the people who seem to not understand the most basic of drawings (I had the great pleasure of someone fail at guessing the word “ring”).

The flip side of this is that when you play with friends (there’s a great Facebook integration system included to help you connect) Draw Something can become a ton of fun. My most memorable guessing experience was when my fellow Capsule Computers Editor, Jonno Weiss, elected to draw Cartman’s ventriloquist hand-puppet “Jennifer Clopez” from South Park to illustrate the word J-Lo. Using inside jokes and things you know your friends will just get adds a tremendous amount to the experience, and speaks a lot to how the original concept of Pictionary became such a widespread game. 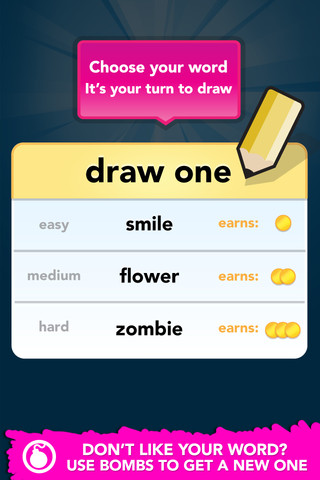 There are other issues with Draw Something beyond the aggravation of random players, though. If you’re in a game and want to stop drawing or guessing to move to another one… well, you can’t (short of rebooting your iDevice). This is completely off-putting and makes exiting a frustrating experience with a game-troll a bigger challenge than it really should be.

When you play Draw Something with a friend, it’s some of the most fun to be had on iOS platforms. When you’re playing with random people, the game’s flaws reveal themselves to you, and you’ll occasionally feel like chucking your device at a wall in frustration.

The game features a cutesy intro, but aside from that, audio plays almost no part in Draw Something. What does play a part is the slickly designed interface.

It’s easy to understand everything happening on screen, and being able to watch your opposite player’s guesses and drawing process is great fun and really makes you feel like you’re playing against another person. Watching their thought process is a lot more gratifying than simply getting “correct” or “incorrect” as replies to your turns.

Draw Something is a game that is equal parts frustrating and glorious fun. When played with friends it becomes possibly one of the best multiplayer experiences on the iOS platforms (minus a few polish issues), but when played against someone who you don’t know, it wins out for getting the worst out of its mechanics in almost every way. By all means check out the free version that comes with ads, and if you find you spend more time laughing with friends than struggling with randoms, then the full purchase is well worth it. If not, steer clear.