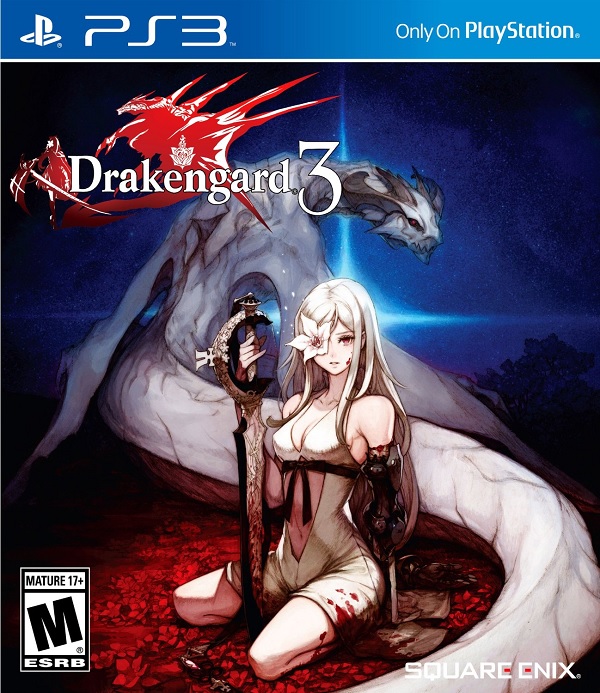 Overview
Taro Yoko has only directed a number of games in his life but for many people his titles are impossible to forget.  This is mostly because he is the man responsible for the Drakengard series and Nier. While Nier was a great return to form, it has been nearly ten years since a Drakengard title was produced.   As such fans were delighted to hear that Drakengard 3 was in development and better yet, it was going to be released in North America. Now after so much time has passed, does Drakengard 3 still have the same feel of the past games?

Story
While an old man begins to tell the story of how the ‘Intoners’ saved the world and brought it to prosperity, he is suddenly stabbed through the chest with a sword. The person holding this sword happens to be the main character of Drakengard 3 Zero and she is one such Intoner. Unfortunately unlike the story the man was reading, Zero isn’t about to save anyone. In fact she is out for blood. To be more specific, she is out for her sisters’ blood. 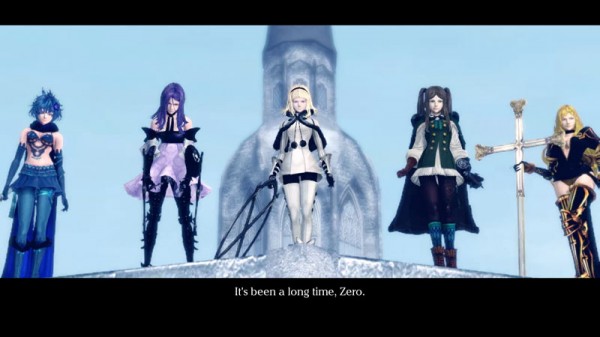 Zero is searching for her five Intoner sisters to kill them all and seemingly take over the world for herself and with the help of her dragon Michael she quickly makes mincemeat out of her sisters’ defenses before facing off against One, Two, Three, Four, and Five. Despite her best efforts, One is prepared for Zero’s attack and counters with a corrupted dragon of her own that not only tears off Zero’s arm but also wounds Michael so grievously that he is forced to reincarnate.

Taking a year off to lick her wounds, Zero and the young and naïve Mikhail, the reincarnated form of Michael, are out for revenge this time and Zero’s first target is her sister Five as she begins her hunt once again. As you may surmise, Zero is not exactly a good person as she relishes in the thought of slaying her sisters and anyone who gets in her way and treats Mikhail like trash.

While past Drakengard titles may have been balanced in a gray area, throughout Drakengard 3 we see Zero as largely the villain of the series as she brutally works her way through her sisters and takes their disciples as her own. Then again, her sisters range from innocent to psychopathic and their disciples are either huge perverts or also psychotic. With a cast of characters full of evil or twisted personalities Drakengard 3 shines by giving these characters hilarious dialogue as they argue and trade quips with one another through each stage and in cut-scenes. 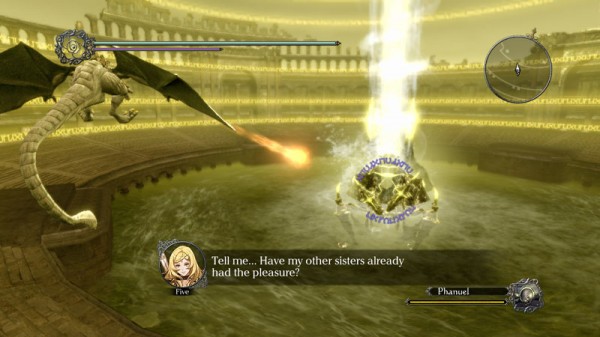 Although laced with plenty of great humor and strange situations, the story itself can be rather confusing at times, as the Drakengard series is wont to do. Zero’s quest seems to be nothing more than a quest for destruction. However the further one goes the deeper the rabbit hole becomes as even the basic ending of the story is not the only ending available as there are four separate endings in total, each one branching off on its own similar to past Drakengard games and as one progresses it creates a need to know more about the world surrounding the game.

It is worth noting though that unlike last few games, Drakengard 3’s story branches are simply unlocked by completing the previous branch which makes use of a few past stages that have been twisted in some form. That being said, the final branch does require a bit of work to unlock and completing the branch itself might be the most frustrating part of the title.

Gameplay
Drakengard 3 has remained true to its roots as far as combat is concerned; only evolving to become a faster system over the years. After players gain extra weapon types, they will be able to switch between four different weapons at any time allowing the player to string together Gauntlet, Sword, Lance, and Chakram attacks all into one intricate combo if they happen to be skilled enough or dodge one of the boss enemies long enough to actually pull off such a barrage of attacks without killing everything before it is finished. When a blood gauge is filled players can also unleash Zero’s ‘Intoner’ abilities to enter a rage state that deals a large amount of damage and makes her invincible against standard enemies. 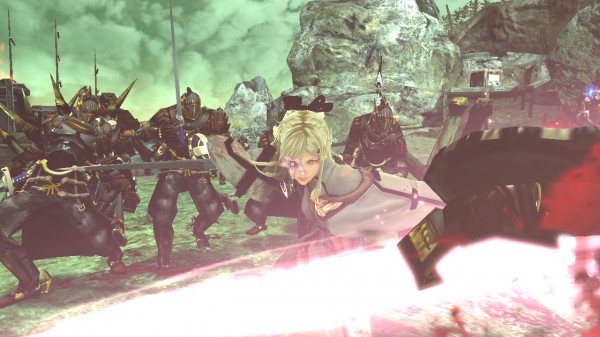 Related to the final ending unlock requirement, there are a large number of weapons available in the game for the player to use and these can be upgraded through the use of money and upgrade materials found in levels. Upgrading a weapon not only raises its stats but also changes the appearance of the weapon, adds attacks to the weapon’s combo, and even changes the attack range making every weapon feel a bit unique and adding quite a lot of variety to the game’s action.

Speaking of variety, there are actually a fair amount of enemy types the player will come across in Drakengard 3 and while a number of them are basic soldiers rarely do you only face off against one enemy type at a time. While there is no option to adjust difficulty, the game is pretty forgiving as far as failure is concerned. Not only can the player play through past levels to level up, upgrade weaponry, and purchase healing items that can be used in combat anytime they die and restart the level or from a mid-level checkpoint, enemy attacks will start to do less damage making it easier to finish a stage.

When you aren’t battling on the ground there are a number of stages that involve fighting against enemies on dragonback. Riding on Mikhail is a relatively rare occurrence that happens around fifteen times total throughout the game’s storyline and these sections range from rail-style shooting where the player has to fly Mikhail around projectiles and kill flying enemies and attacking units on the ground while either running on the ground on Mikhail or keeping him aloft to use various attacks. 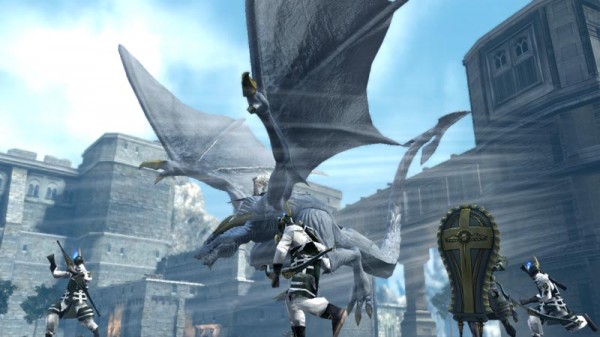 Thee controls for Mikhail are pretty simplistic as the player can choose to do a homing lock-on attack during the on-rail sequences while the free battles require the player to lock onto an enemy and either unleash fireballs, tackles, or tailwhips to defeat them. All of the bosses in the game involve the player fighting on Mikhail and these range from entertaining to a pain, mostly because of the game’s camera system. While the camera can be an issue in normal combat, fighting in an enclosed space atop of a dragon and trying to dodge attacks and fly around can make the camera become an enemy in own right. Then there’s that ultimate boss which… yeah.

Outside of these story battles there are also a number of side-missions that are timed challenges that either involve the player gathering items from killing enemies or opening treasure chests within a set time limit and without the use of items or allies. Most of these stages require a specific weapon to only be used and add a bit of spice to the game, though they tend to grow repetitive very quickly. There are also survival modes that challenge the player as they fight against waves of enemies for rewards and these are some of the best ways to test your abilities and make use of the game’s lovely combat system. 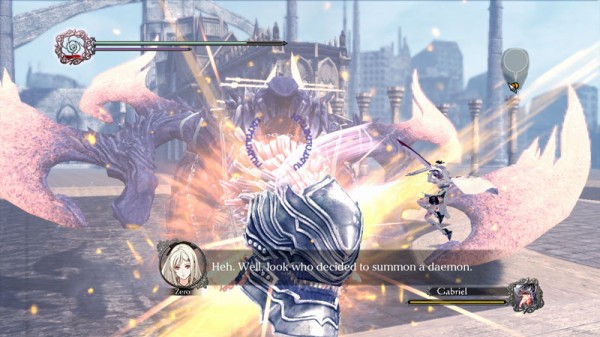 That being said, despite having a fun combat system, the game has a lot of issues when it comes to actually running at 100%. There are numerous times that the action will become too much for the game and cause a massive drop in frame rate and these usually happen when Zero is in her Intoner state or fighting the larger mini-bosses and quite often in cut-scenes where Zero and her sisters are speaking. It is also worth noting that there are a few glitches that will pop up in the game such as enemies not spawning properly in locked rooms where the only way to advance is to defeat a certain number of enemies. When this happens the player has no other choice than to restart a level which is problematic and happened three times throughout the basic story.

Visuals
Graphically Drakengard 3 is a mixed bag. The designs of the Intoners and their Disciples are wonderful looking, with the Intoners really becoming something special as you encounter them in cutscenes. Even the designs of the standard enemies you come across are fairly impressed and varied enough to make each chapter feel like a new experience and as I mentioned before the variety of weaponry available and the fact its appearance changes as they are upgraded is a nice plus.

Unfortunately the level designs themselves are rather uninspired looking. Sure they are varied as each chapter takes place in a different area, but each stage is bland and full of poor looking textures. Speaking of textures, the pop-in rate can be terrible at times, especially in regards to Mikhail who often takes a couple of seconds to fully load in. It is also worth noting that the design of the planes where enemies can walk is strange and can create a number of odd looking moments as enemy soldiers will stand halfway in the ground or larger enemies will be hovering completely in the air save for a little bit of their body on some raised ground.

Audio
The voice work in Drakengard 3 is suitable with the English voice actors fitting their roles nicely. Mikhail’s voice is filtered and sounds young to match his naïve personality while Zero’s tone is fitting considering her actions. A special highlight goes to the fact that the enemies players are fighting against will often make remarks as Zero tears through their ranks. These phrases are always different sounding even if the voice actors are the same and gives the battles an added layer of depth. 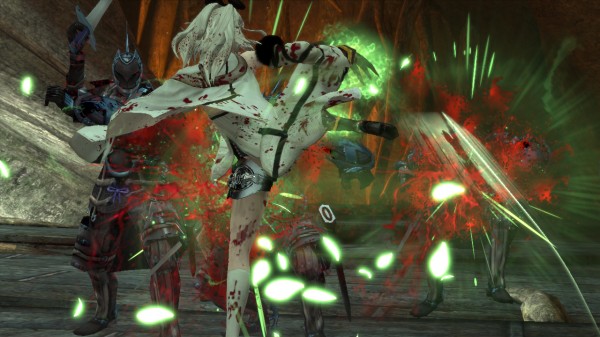 I can also say that Drakengard 3 sports an absolutely wonderful soundtrack that cannot be disregarded. Everything from the battle themes to the fireside moments in-between stages is amazing sounding. That doesn’t even touch upon the background music for the boss battles which will be some of the best that you can experience in a game like this.

Overall
Drakengard 3 is a game that many thought would never be released in any form, let alone in the West but thankfully it has been and although it is plagued with graphical glitches and slowdowns, the enjoyable cast of characters and the intriguing storyline will keep players enthralled as they make use of the fast paced combat system to slaughter every enemy in Zero’s way as she tries to kill her sisters. Drakengard 3 isn’t without its issues but once you step into Zero’s shoes they won’t be able to stop until her lengthy journey is seen through until the end.