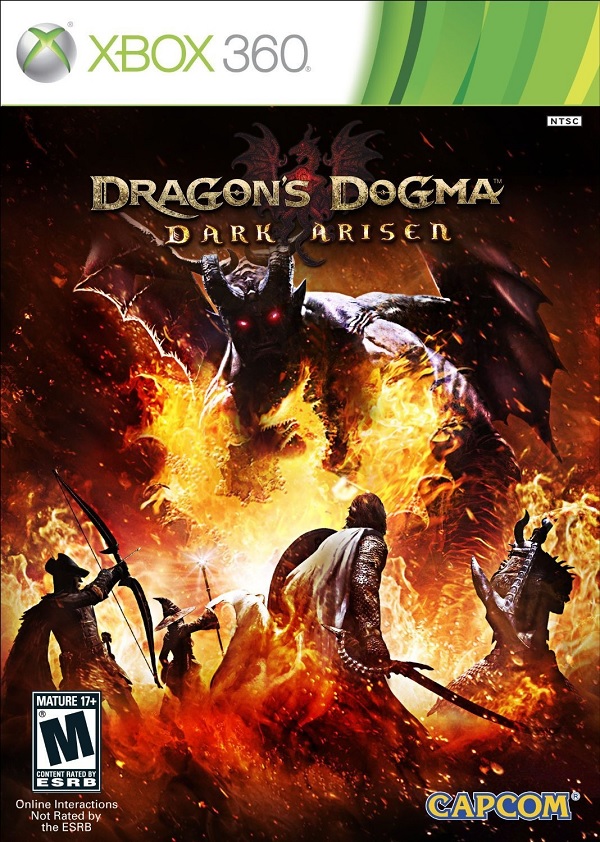 Overview:
When Dragon’s Dogma was first released a little under a year ago, it was a great experience that had a few issues but overall offered something fresh that could eat hours and hours of your time as you traveled the continent slaying all manner of beasts in extravagant and enjoyable fashion. Now Capcom has released something of an expansion to the original game called Dark Arisen. It is worth noting that Dragon’s Dogma: Dark Arisen contains the entirety of the original Dragon’s Dogma game and my review for that original section of the game can be found here. However what does the Dark Arisen expansion hold for those who already know the secrets of the world?

Story:
Upon starting up the game, players are given a new quest automatically which mentions a new land being unlocked and the only place to get there is from the pier in Cassardis. Upon arriving in Cassardis players will stumble upon a new character named Olra who is seeking out the help of the Arisen. Upon accepting to help this woman, players are whisked away to Bitterback Isle, a new area set to test the Arisen unlike any area before it. 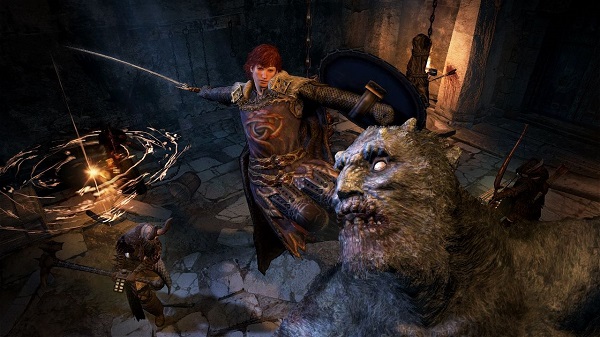 It is worth noting that the story of Dark Arisen is rather minimalistic, but still intriguing as Olra knows little about who she is or why she is trapped upon the mysterious island and the player is the only one who can help her piece together her memory. The further players venture into the dungeon that is Bitterback Isle more of her memories seem to return and haunting voices and scattered epitaphs slowly begin to reveal a tale of loss that is as bleak as the dungeon the players are traveling through.

Visuals:
The original Dragon’s Dogma was never very polished visually, with character designs being rather basic and plenty of rough looking textures. However despite this the title always offered an atmospheric experience with lush scenery and magnificently designed enemies to battle against.  It is interesting to note that this release of Dark Arisen comes with an optional HD texture pack which can be installed which makes the basic game’s lush environment even better looking than before. 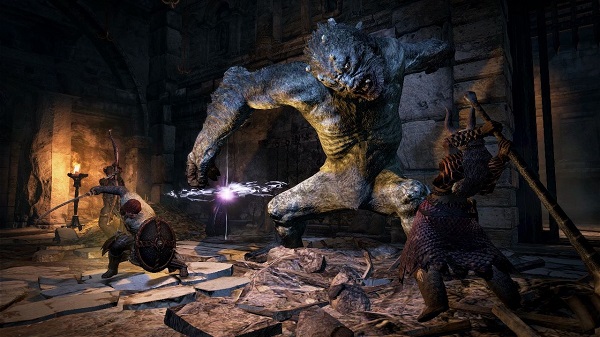 As for Bitterback isle, the island truly lives up to its name as it really feels like an oppressive place to be and the deeper one ventures into the dungeon, the more oppressive the environment becomes, such is how great these levels are designed. That being said, there is a fair amount of areas that, while still new to the game, are literally copied from one another minus a few small details changing things up.

As for the new enemies that players come across, a few of them are re-skins of past creatures players have fought against but for the most part every new enemy players fight against has a terrifying new look to them. This includes the ominous Death, a two story tall creature that had to be restrained to a wall for fear of destroying the entire dungeon and more. These new additions provide not only a challenge of the player’s strength, but also of their courage as the level design in Bitterback Isle always places the player at a disadvantage, whether it be narrow corridors, tiny battlefields, or dangerous pitfalls all around you, making every fight one that must be approached carefully.

Audio:
The game’s background music is mostly forgetful though the atmospheric noise does add to the experience of Bitterback Isle, as winding through narrow corridors can be quite dangerous if the player isn’t listening for threats. 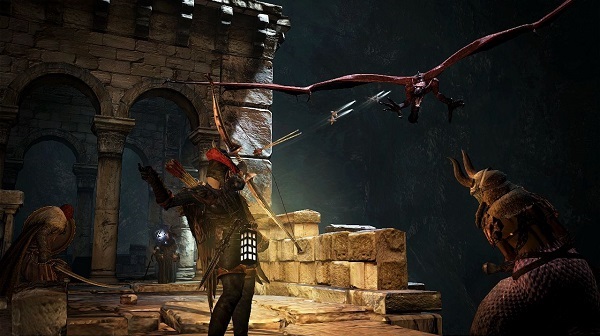 As for the game’s voicework, it is worth noting that there is a new Japanese voice over option which can be installed and used if the player wishes. This is a nice little inclusion that frankly, does wonders for the fact that although new dialogue has been added to the Pawn’s voice database, they still incessantly repeat the same dialogue over and over again, which at this point in the game has become quite an irritant.

Gameplay:
Despite being playable almost from the get-go, tackling Bitterback Isle is best saved for experienced Arisen that are at least above level fifty. As such, Dark Arisen should be seen as more of an expansion to Dragon’s Dogma’s already impressive end-game. The reason that it should be seen as such is due to the fact that anyone tackling this area unprepared or under leveled will find themselves staring at a game over screen very quickly. 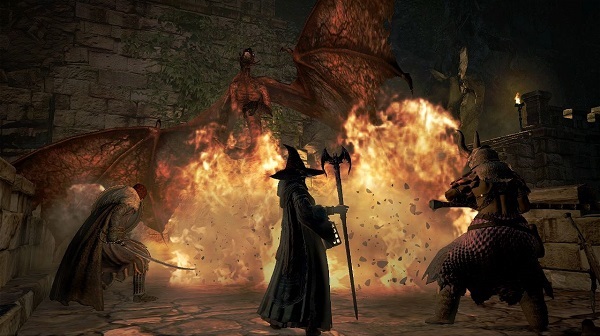 Even players entering the dungeon with experience and powerful Pawns at their side will still find Bitterback Isle a dangerous place. Upon entering the dungeon players may face off against some opponents they find a bit tame, but the deeper they venture the harder the challenge. This includes a number of the aforementioned new enemies which can potentially kill a player with one blow and the fact that even if a battle may appear to be over, it could just be beginning.

You see, while players may already be struggling against a number of smaller enemies or a larger mini-boss style opponent, there is always the risk of something far stronger appearing once battle ends. Occasionally a stronger boss that dwarfs your previous opponent may appear at the scene of the carnage and ultimately the player either must choose to run away from this powerful foe or take it head on with everything they have. 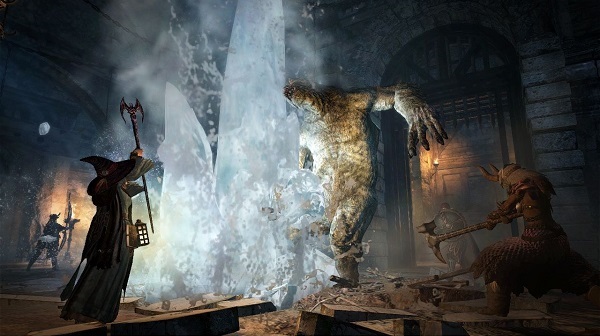 However if the player chooses the latter option, one of Dragon’s Dogma’s returning issues rears its head, the fact that Pawns tend to be incredibly stupid in combat. Now players should know that Pawns learn about enemy weaknesses and attack patterns the more they fight them, but even after fighting the same enemy a few times there are many instances where they are more of a hindrance than a help. This includes taking easily avoidable blows, enchanting weaponry with wrong element types and my favorite, leaping over small objects into a pitfall and immediately dying, forcing the player to re-summon them at the cost of their rift crystal total.

Thankfully, Pawn frustration aside, the combat of Dragon’s Dogma remains the best part of the game as climbing up a towering beast and slashing at its weak points in numerous battles that can best be described as epic thanks to their intensity and level of difficulty makes Bitterback Isle a challenge worth accepting for any veteran Dragon’s Dogma player. 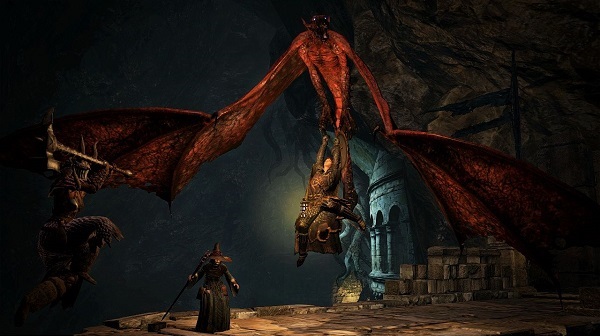 Returning players are also gifted a large number of Rift Crystals, which are essential for not only summoning Pawns but also for a number of other things on Bitterback isle, an infinite Ferrystone that allows for teleportation and a few pieces of costume armor. Though it is worth noting that although there are no noteworthy skill additions to the player’s arsenal, a large amount of equipment added to the game and even an ability to upgrade dragon forged equipment to a new level, will help equip the player for the fight before them, and what a fight it will be.

Overall:
Dragon’s Dogma: Dark Arisen offers a challenging new addition to fans of the original game by providing not only a number of new enemies to battle against, but enemies that are capable of challenging seasoned Arisen in a bleak atmosphere where retreat may be the best choice for some battles. For newcomers, Dragon’s Dogma: Dark Arisen is something that should be picked up immediately for anyone who loves RPGs or action adventure titles, especially at this cheaper price. As for veterans, while it is still plagued Pawn idiocy, the ten or so hour expansion is more than worthwhile for fans of the game, though its price point may be a sticking point for some.