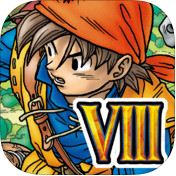 It has been eight years since “Dragon Quest VIII” was originally released in Europe and Australia on the PlayStation 2. Eight years! It isn’t ancient but it’s still quite old for a video game. Now, all these years later, Square Enix have decided that it is time to give the old boy another run around the park, this time on mobile devices.

“Dragon Quest” is a video game franchise that has been around for a very long time and, in that time, has built up one hell of a fan base so there will always be gamers around the world with room in their hearts for more “Dragon Quest” and I don’t think this mobile release for “VIII” has come at a better time. Thanks to Square Enix I’ve been given the chance to partake in a wonderful journey, the likes of which I’ll hopefully remember for the rest of my gaming life. 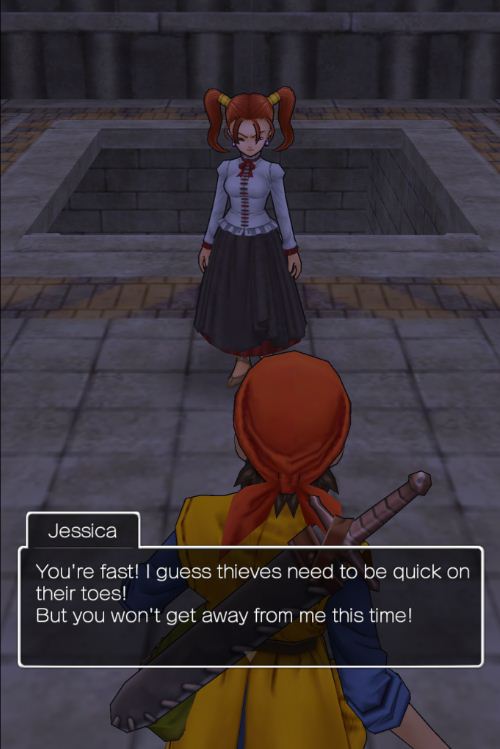 “Dragon Quest VIII” has players take the role of a young warrior (of which you name whatever it is you please) who no longer has a kingdom to belong to and is now working as a “mercenary” of sorts. The Hero travels with fellow mercenary Yangus and their employer who is also accompanied by his granddaughter. Trode (the employer) and his granddaughter Medea have both been transformed – one into a troll and the other into a white horse – by a benevolent being called Dhoulmagus.

The quartet now travel the land, searching for Dhoulmagus in an attempt to defeat him, stop whatever evil plans he has for the future and return the two former-royals back into humans. As you progress through the game, you meet others who have vendettas against Dhoulmahgus and you also learn more about yourself, the main character. “Dragon Quest VIII” hosts a story that seems kind of boring or generic but it just works to prove that any story type can be made interesting with good writing.

Traveling the land searching for a bad guy is nothing new, it actually seems somewhat boring in a day and age where video game stories are so diverse and outside of the box but “Dragon Quest VIII’s” story is anything but boring, with interesting characters and wondrous settings it’s hard to feel “bored” with the game. Another thing that stops it from being simply basic is that the story indeed unfolds while playing, you’re not just searching for an antagonist, you’re learning about yourself and the land as well as you fellow fighters. “Dragon Quest VIII” takes “simple” and makes it into something “great” and that’s honestly the best way to describe the story. 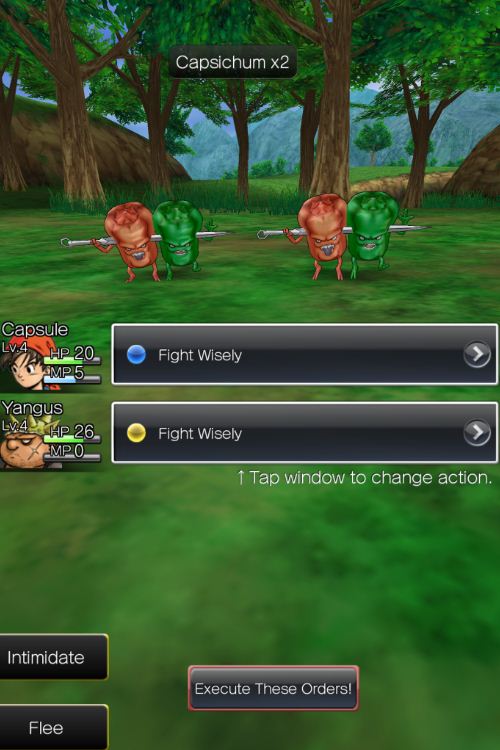 If you’ve ever played a “Dragon Quest” series title than you’ll already be aware of how “Dragon Quest VIII” plays but for those who don’t; it’s basically your “typical” RPG/adventure game that features a menu-based combat system as well as leveling mechanics and an extensive overworld. Players will travel from town to town, dungeon to dungeon, environment to environment, randomly encountering enemies, leveling up, earning weapons and armour, etc. I say “typical” not as a negative but simply as a descriptive term. “Dragon Quest” is quite traditional and it’s obvious.

That’s not to say it is dated though…it’s fantastic. “Dragon Quest VIII”, after playing, you’ll realize has inspired a great deal of newer RPG titles. In fact, the entire “Dragon Quest” series was inspired and has inspired the world of RPG/adventure games. It has nice level and upgrade system, experience from battles levels your characters up and rewards you with “skill points” which you can then attach to certain combat types. If you rather your character use swords than you can boost up the sword style unlocking certain sword-specific boosts and attacks for that particular character.

Some characters can use magic, others a strictly physical but, in the end, it’s up to you how exactly they’ll work in battle which is great! Transition from the overworld into an actual battle is fast and fluid with no visible lag time due to the struggle of a quick load. What I really enjoy about the way “Dragon Quest VIII” is played is that it is seemingly basic but has a lot to be discovered, uncovered and mastered to be able to fully appreciate it. It’s simple enough that you don’t put off actually jumping in to play the game but it is extensive enough that you can sit there for hours on end and just immerse yourself in it. 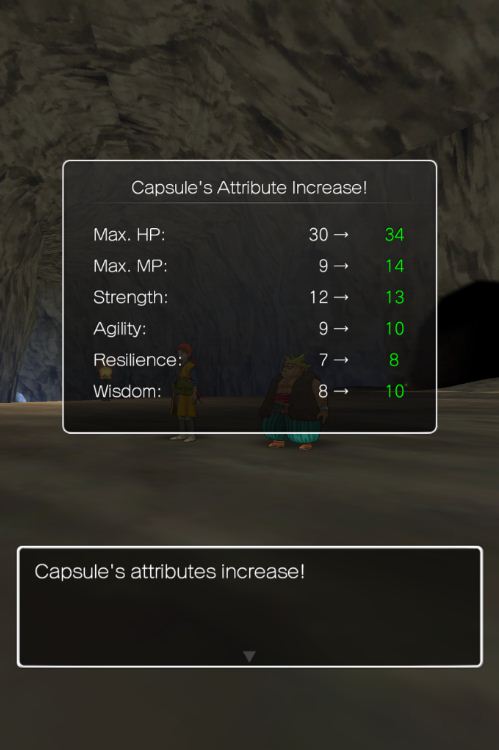 To say that I’m “impressed” with the visual quality of “Dragon Quest VIII”…would be an understatement. I was very much taken back by how good the game looked. Now, obviously it wasn’t perfect; not only is it an older title so it is easy to see how dated it is but it has now been rereleased for mobile devices which, if you are a part of this generation, you’d know don’t have the best video game capabilities…though, they’re getting there and “Dragon Quest VIII” makes that quite obvious. I happen to be a huge fan of Akira Toriyama, creator of the legendary “Dragon Ball” series and one of the lead character/monster designers for the “Dragon Quest” series.

He’s got one hell of a distinct art style and an imagination wild enough to come up with some of the oddest and most brilliant enemies I’ve ever seen. I was quite disappointed at the visual style of text boxes throughout the game. It having a menu-based battle system, it’s crucial that the design of those particular menus are both overall appealing and suite the game. That’s something the mobile version of “Dragon Quest VIII” does not do, at least, to a high standard. Text boxes are stark, to be blunt, and are generally boring to look at. They also don’t entirely match a fantasy RPG like “Dragon Quest” and it’s quite obvious.

The overworld is extremely large and features some nice landmarks and some beautiful world views but I found that sometimes it looked a little…”bare”, and I think it was simply because, most of the time, you were the only one around with the occasional appearance of a visible enemy or an NPC. For the most part, the animation was at a very high caliber. I constantly found myself surprised at how “real” certain characters moved or reacted to certain things but it was also obvious that the game is definitely dated in some places above others. All in all, it still looked very impressive. 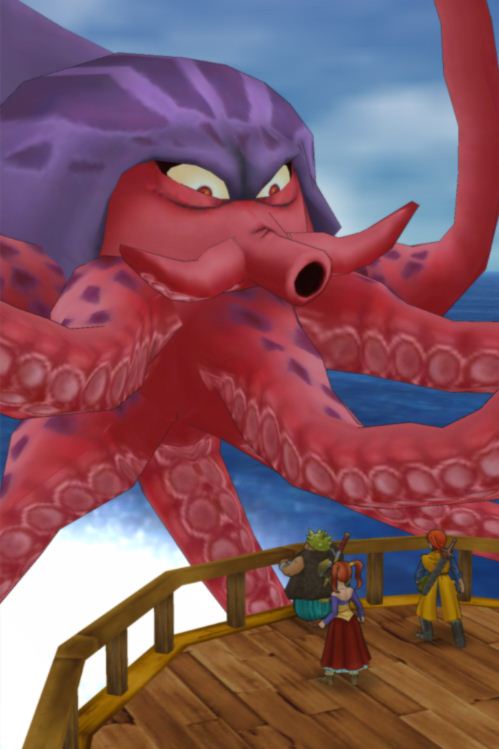 “Dragon Quest VIII” being a game entirely absent of voice acting, it is obvious that it relies on its musical soundtrack to add to the game what the addition of voice tracks would. The original PlayStation 2 release of the game had what a lot of people say is a fantastic voice cast, unfortunately mobile hardware isn’t as “hardcore” as the PS2 so certain things had to be cut out of the game and one of those things just so happens to be the voice acting. Thankfully the game has a brilliant soundtrack. One of the most appealing things about the “Dragon Quest” series is that it constantly shifts between light and dark tones.

This is thanks to many things; the story the aesthetics, etc, what matters the most is that the soundtrack transitions perfectly alongside the rest. The soundtrack is almost entirely populated by orchestral compositions both light-hearted and ominous depending on the situation and setting. I’d compare it, auditorally, that to “The Legend Of Zelda”; it’s soundtrack somehow makes you feel so warm but can rip that from you in the span of an environment transition, raising tension levels and getting you ready for what comes next. I would have been nice to have had some voice acting simply because it’s a dialogue-heavy game and it would have just broken up the monotony of constantly reading text. 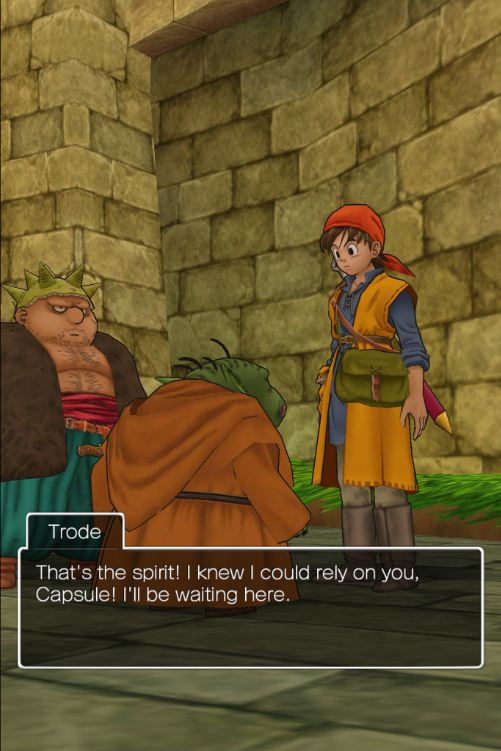 It’s clear as to why the “Dragon Quest” series is such a celebrated one and it’s clear as to why “Dragon Quest VIII” is described as one of the greatest. Yes, its transition from the PlayStation 2 onto mobile device does have the game lose certain things in the process that make it less than desirable for old-school fans but for those of you out there who never played the original release, this may just be your chance to get in on something great. With nothing to compare it to, “Dragon Quest VIII” for mobile devices is an almost perfect release. It brings the brilliance of a well-made JRPG to a platform that, for the most part, is populated by mostly casual games.

Now it lacks certain things that make it “imperfect” but that doesnt even get close to making it a bad game. It has withstood the test of time and even with certain things cut out of it due to hardware limitations it still stands as one hell of a good JRPG. For twenty dollars it’s hard to pass up. It’s a game I’ve been playing alongside next gen titles and, if I’m to be brutally honest, it does a better job at being a video game than one that is “supposedly” part of the newest generation.