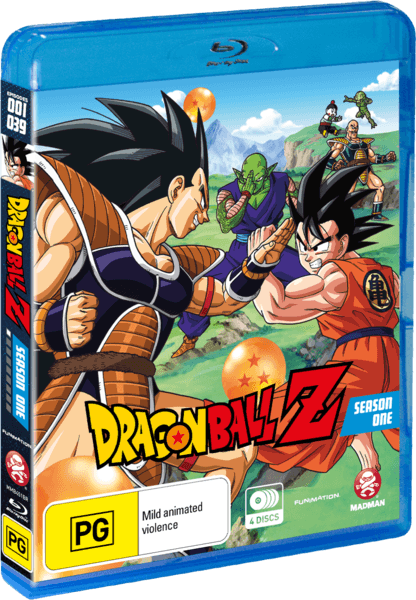 Perhaps the most popular anime of all time, Dragon Ball Z is receiving yet another retelling of its classic good vs. evil story featuring adventure, comedy and what everyone loves to remember, the epic fights. This time the battle is being bought to Blu-ray, marking one of the first times the full series is being completly brought to Blu-ray outside of a few movie releases and the discontinued ‘level’ sets. Does this latest release do the series justice or is this just another attempt to cash in on the massive fanbase?

I’d be surprised if anyone is reading this review and isn’t familiar with the story of the Saiyan Saga of Dragon Ball Z, but I’ll keep spoilers to a minimum if you are looking to experience the story for the first time through this release. Season One contains episodes 1 – 39 of the series, covering the Saiyan Sage which includes a number of key fights against Raditz, Nappa and Vegeta among many training sequences and self contained adventures. Memorable villians and new characters such as Vegeta, Gohan and King Kai are introduced, new bonds are forged and tested and many infamous fighting techniques such as Special Beam Cannon and Destructo Disk are shown for the first time. 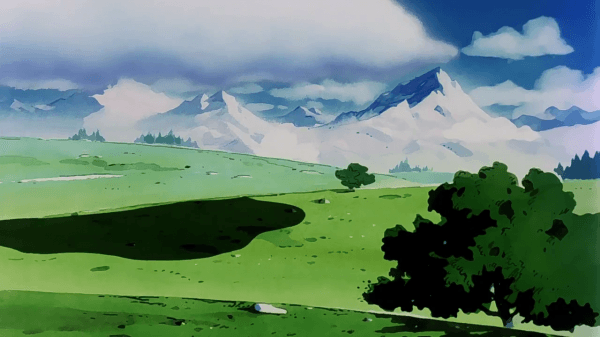 There is a great mix of action and storytelling as the Dragonball universe is greatly expanded upon in comparison to the earlier Dragon Ball. The fights are full of action and there is a great mix of dominance and evenness within the fights as they ebb and flow, allowing characters to showcase their full power and techniques whilst also keeping you on the edge of your seat as you contemplate who will be the victor. Season one sports the full cast of Z-warriors so you get to see the likes of Krillin, Tien, Yamcha and even Chiaotzu enter the action before they become vastly outpowered by the Super Saiyans.

This is the full original broadcast of the anime and not the much shortened Kai version which removed alot of the filler episodes, of which there are quite a few in Season One. These filler episodes often aren’t the most interesting or fun (particularly the one’s involving Gohan), so people who want a shorter and sharper series to watch might prefer Dragon Ball Kai, which is also available on Blu-ray and has had a similar remaster done. 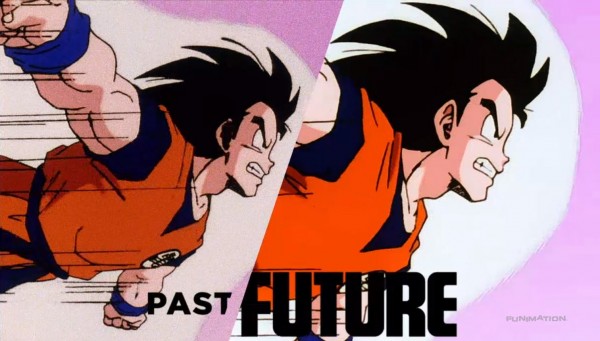 There are three things Dragon Ball Z purist are very vocal about it when it comes to the series being released. Colour correction, amount of grain and the most controversial, aspect ratio. Dragon Ball Z is an old anime that first aired all the way back in 1989, way before the HD era. This means the show first aired in the old 4:3 aspect ratio but has been converted to widescreen for this release without the option to view it in its original form, resulting in about 20% of the original image being lost. This does look odd in some scenes with the very top of character’s heads being cut off, but Funimation have said they have reframed each scene individually so no important details are lost, and for the most part they aren’t, but there is still a very heavy loss in picture. Grain has been completely removed so the picture is much clearer and was a neccessity due to the move to Blu-ray as the film would of looked horrible with the grain kept but some would say the effect is overdone and the picture loses detail thanks to that removal. Colour saturation has been fairly heavily increased, meaning colours are brighter than how they were originally intended which does sometimes have a detrimental effect on the source material as colours seem too simple and deeper colours like the orange of the character’s uniforms appear too bright. You can make your own judgements about these changes by looking at the above and below images which you can click for a full size comparison.

Saying all that, if you’re not a super hardcore fan or don’t mind these changes then the quality offered by this Blu-ray collection is high. The series looks pretty good in HD, especially considering the age of the anime and the fact the art style tended to be poorer in these earlier episodes. Colours are vibrant, lines are bold and all the action is crystal clear. One small problem that is noticeable only on still shots is that the image will sometimes wobble and distort, which can be a bit distracting but isn’t present too often and is most likely due to the old age of the source material rather than the remastering process. 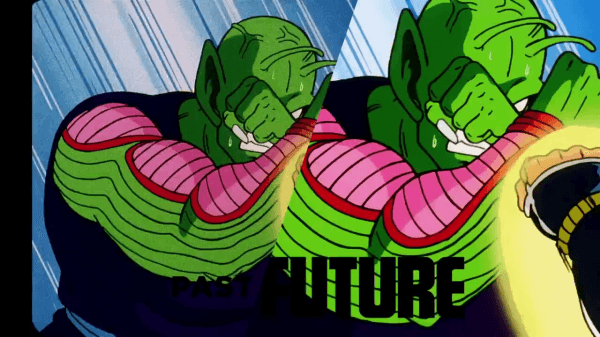 The original boxart looks fantastic and if you go on to purchase the rest of the series then they will all link up to form a cool ‘mural’ representing all the key moments and characters of the anime. Menus are clean and simple with nothing to complain about on that part.

There’s no need for dub vs. sub battles with this release as the audio caters to fans of both. The default audio is set to the Funimation English dub with the original Japanese Audio track and is presented in True HD Dolby 5.1 surround sound and is awesome with the volume turned up, with sounds coming from the appropiate speakers when required. The other audio options are original U.S. broadcast which is presented in Dolby TrueHD 2.0 and finally the full Japanese audio with original music and voice which is presented in TrueHD Mono. The final option does sound rather old and muffled due to its age but has got a bit of an upgrade thanks to Blu-ray HD sound. The classic Japanese audio track is often touted as a classic and sounds great here. Many of the memorable tracks from the English broadcast didn’t come until late in season two and it would be the fair to say the dub music is less than impressive during season one so the dub with original music is the clear winner here in terms of quality. 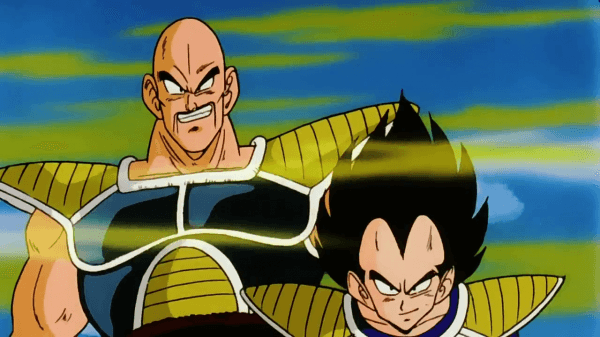 As for the voice acting again you have choices of English and Japanese. The work of the Funimation voice cast still holds up very well today and characters just sound right, however you do get the feeling the voices that aren’t carried over from Dragonball are still coming into their own at this early stage in the series and do sound notably better in later seasons. People seem to either love or hate the Japanese cast so if you wish to watch the show in its original form or not will be your choice.

Special features are pretty scarce as they always have been with Dragon Ball releases, but there are a few extras there. The biggest is a sneak peek at a behind the scenes featurette that gives an insight into the legacy of Dragon Ball Z and the remastering process which features interviews with some of the managers and voice actors. Apart from that, there is also a U.S. trailer which highlights the differences between the original and remastered versions, textless opening and closing songs and trailers for a few other animes. Nothing to write home but nice to see a bit of effort being made as well as the promise of future special features in upcoming releases. One thing I found dissapointing is that the episode guides included in the orange brick DVD set are nowhere to be seen with this Blu-ray release, which is a shame as they featured episode information and interesting character biographies. Finally, if you were looking forward to seeing the ‘next time on Dragon Ball Z’ segments then those are also missing from this release, however the previous episode recaps are present. 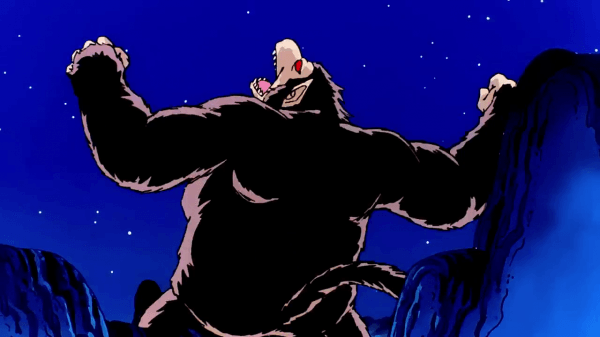 It’s hard to give an accurate score to this release especially when considering who will be buying these Blu-rays. Hard core fans most likely won’t due to the cropping and other visual issues mentioned in this review and it’s unlikely that new fans will randomly pick this up due to the age of the anime, especially when they are probably only aware of Dragon Ball Z Kai’s existence. The release will look nice to those who aren’t purist and are not aware they are losing a portion of the image and the classic story with it’s memorable cast of characters and epic fights is still as timeless as ever,  even if there are a few dull moments during the fillers. The sound quality offered is top notch, which is probably the highlight of this package but most likely won’t be enough of a push for people to splurge on the Blu-ray, especially with a lack of any noticeable extras. To sum it up, if you’re not a hardcore purist then this release will satisfy you’re nostalgic cravings and is a decent entry for new fans, otherwise you are most likely going to look elsewhere for your DBZ fix.