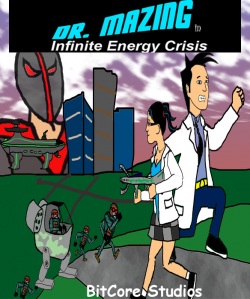 When I was asked to do an indie game review, I was quite excited. “I wonder what quirky yet fun little game I will get to try out!” I thought. I have played several indie games, whether as a part of the Humble Indie Bundle (which I payed $15.00 for, thank you very much) or as standalone games downloaded off of XboxLive; I am proud to say that I support indie developers. I am also aware that because these developers do not have massive budgets and teams, they have a certain amount of wiggle-room when compared to the larger developers.

So when I say that Dr. Mazing is to indie games what Pol Pot was to Cambodia, understand that this game was bad, even considering it’s “indie” status.

Honestly, it feels kind of wrong calling this steaming pile an indie game. For that matter, it feels wrong to even call it a “game”. It seems more like an unskilled gamer decided to pleasure himself mentally by cobbling a game together out of a half-remembered high school programming class and Microsoft Paint, just so he can call himself an “indie game developer.” Upon browsing BitCore Studios’ website, I found that this game was not some sort of ill-conceived joke, but that the creator took this game quite seriously.

This does not surprise me.

When I first started the game up, I was greeted by this: 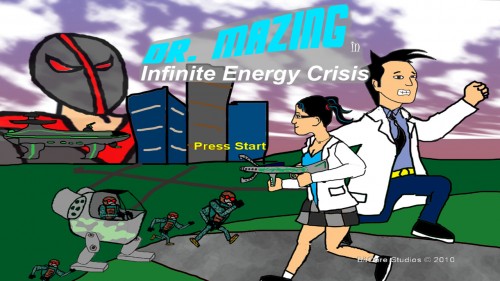 This is what greeted me. I should have known to turn back then.

Upon viewing this mess, I thought to myself, “Gee, what awful, child-like art. This can only mean that the humor or content will be more mature in nature, and they chose this art style ironically.” This view made sense, based on the fact that no game would dare use art this bad if it wasn’t going to be able to make up for it in gameplay and story. Honestly, it looked like a 4-year-old with epilepsy finger-painted it in a drunken stupor. Not that I’m saying I could do any better, but then again, I’m not a game developer. Moving on…

I hit the start button, and what could be described only in the loosest sense as “the plot” began. This being a little arcade game, I wasn’t expecting much of a plot. Considering that the game is a 2d sidescrolling beat’em up only means that it requires even less of a plot than most games. Other great 2d sidescrolling beat’em up’s are the quarter arcade classics Teenage Mutant Ninja Turtles and (my personal favorite) Cadillacs and Dinosaurs, and their plots essentially were “Bad people did things. Stop them. Beat up their dudes.” So the fact that I was still disappointed by the plot of Dr. Mazing is astounding. It would have been better with no plot, because at least then I wouldn’t have been subjected to long, poorly drawn, and painful “cut-scenes”. The worst part of the whole thing? It took itself seriously.

That’s right. The only way this game could get away with existing is by being funny, and it doesn’t even try. It tries to be cool and have sexual tension and a grand reveal at the end, and it fails so hard, it almost brings tears to my eyes. 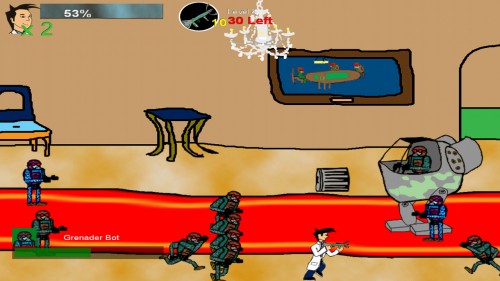 The really great part? All 9 levels are the same. 9 levels of hell.

“But even the worst beat’em ups have some intrinsic value, right? It couldn’t be THAT bad.”

Because while pretty much all beat’em ups are fun in a way, you have to actually be able to play them. This is not one of those games you can actually play. If you can hold down on the X button and move right, you have won the game. You  have just successfully beaten every enemy in the game. That is not playing. That is interactive watching. If you have 2 thumbs, you cannot lose. Except for when you do.

Nearly every enemy in the game is easily beatable with just 2 fingers, but there is one boss who cannot be beaten this way. And this is because this game takes the command “If imagescollide…” very seriously. If an image of a bullet or swinging fist touches your image, even if your character is supposedly nowhere near that bullet or fist, you will take damage. The game forgets that you are viewing the action at an angle, and that it is a 2d game. so things that should go behind or in front of you still act as if they had hit you. Now combine that with an enemy who’s swinging fists take up more than half the screen.

Now you understand this boss.

All of this comes together to make the single worst gaming experience I have ever encountered. I expect better gameplay from internet flash games or McDonalds Happy Meal “video games”. When a gamer looks at a game, and says, “I have the capability to make this game, but the logic and good reason not to.” you know that something is terribly, terribly wrong. This fecal heap could have been made with MS paint and a half-remembered high school programming class, and probably was.

I checked out the site at http://bitcorestudios.com/ , and discovered that I was right. This game was made by a single person. And I have this to say to him: I respect what you have done. You have made a game, and I have not. Congratulations, you are further on the road to being a real game designer than most people who want to be one. That said, you should not have released it upon the earth. Show it to some friends, say “I made a game”, and delete it immediately. That is what you should have done, not CHARGED PEOPLE MONEY for it.

If you do happen to accidentally buy this horrid mess, there is a way to at least get some benefit out of it. Play the game with some alcohol, and every time you want to quit, take a shot. You’ll be drunk by the end of the first level, and dead by the end of the third.

And so, Mr. Game Designer man, I leave you with the immortal words of that guy from Billy Madison, “I award you no [capsules], and may God have mercy on your soul.