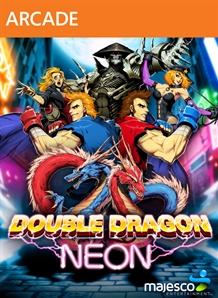 Overview
25 years ago, the world was introduced to Billy and Jimmy in Double Dragon. This release laid the groundwork on the genre of the beat ’em up, while also becoming one of the most love franchises of all time. Fast forward to today, and it’s been a little while since we have last heard of our red and blue brawlers. WayForward has changed all of that with Double Dragon Neon though, as this title attempts to not only pay homage the the name, but also give the nostalgic quarter depositing crowd a new reason to love their modern consoles yet again. Can that old formula still stand strong by today’s standards? Grab a bat and watch out for Linda, as here is our review for Double Dragon Neon. 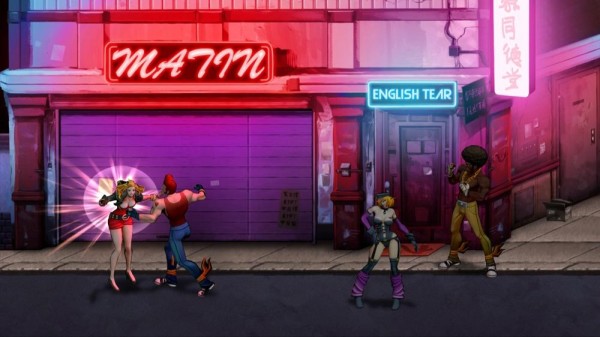 Story
Double Dragon Neon starts out as any Double Dragon should, with Marian being punched in the gut and abducted. Billy and Jimmy Lee, our protagonists, soon arrive on the scene as our heroes, and quickly make chase through the brightly lit streets. Yes, all the classic themes that made the franchise in the 80’s are back, but this time the evil doer by the name of Skullmageddon is at the root of the girlfriend snatching and there are a lot more sights to see as well as locales to trek through.

The greatest part about the plot within Neon is how the game never takes itself too seriously and relies on over-the-top humor to entertain the player. There is certainly enough story to keep you interested until reaching the end (compared to most arcade brawlers), but the amount of small references, run-ins, and cheeky puns that come in-between given this title a load of charm and make the experience stay light and enjoyable throughout. Billy and Jimmy have a bit more of a “bro” like attitude this time around and are a bit brainless, but still make for two awesome combatants due to their overflowing amount of confidence. 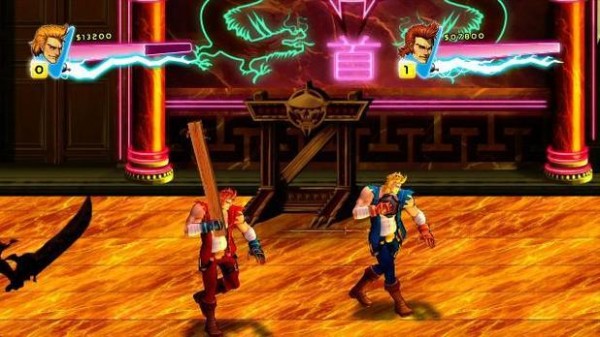 Gameplay
While the plot and goings on are wonderful, WayForward would have nothing in this neon-lit reboot without keeping the same beat ’em up playstyle that the series is known for. Luckily, Neon not only feels familiar, but adds in a hefty amount of features that stay true to the namesake and still manage keep the game feeling fresh while players are pounding on the likes of Abobo and Williams. When it comes to the core, all of the ingredients are in place and flavorful enough to deliver a delicious fist pumping romp. Players simple scroll along through each stage, kicking and delivering blows to waves of foes until reaching the end. The controls have all been mapped out decently as well, making the game accessible to all newcomers.

Back in the arcade days, only one or two buttons were needed to play Double Dragon (you know, stick to move, A and B to punch/kick). That’s almost correct with Neon, but the newly added special abilities enhance the arsenal of Billy and Jimmy, providing a great amount of depth for those craving a much more meaty take on the game. As players defeat foes, cassette tapes can be acquired to unlock and power up abilities. Each cassette tape holds either a technique for the Sosetsitsu or a new stance, which could almost be considered a special class system. The Sosetsitsu abilities contain the likes of spin-kicks, fireballs, and even an almighty fiery dragon to decimate enemies with, and can be leveled up by acquiring more songs of the same nature. This same leveling system stays true for the stances, which are used for increasing stats such as attack, defense, magic, and HP. 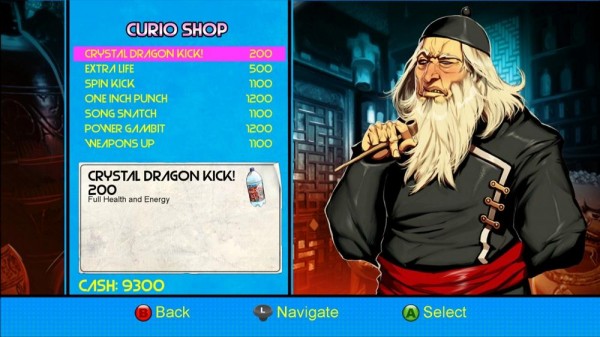 It’s a clever little scheme that certainly provides the most depth the franchise has seen to date, but is made even better and more strategic by the way everything is implemented. Throughout the game, specific stages will have two types of shops hidden within where you can spend your earned dough to buy health and life boosts, as well as a good number of songs. Double Dragon Neon can be a bit punishing when it comes to death (players completely restart each stage when all lives are lost), so it is mandatory to upgrade in shops when possible to gain the edge on a tough swarm of attackers that lay ahead. Thankfully, all earned tapes remain with the player after death, meaning that even though you have to restart, your higher power level remains intact along with your collected cash in order to deliver a bit of ease on each attempt at beating a stage.

It’s almost like a new form of grinding that works wonders to teach players what they need to improve on to succeed. I know some won’t be fond of the lack of checkpoints, but those handholding gestures of modern times can’t hold a candle to the sheer satisfaction of having the grind pay off and is one trait that makes Double Dragon Neon stand miles above other recent entries into the genre as a whole. 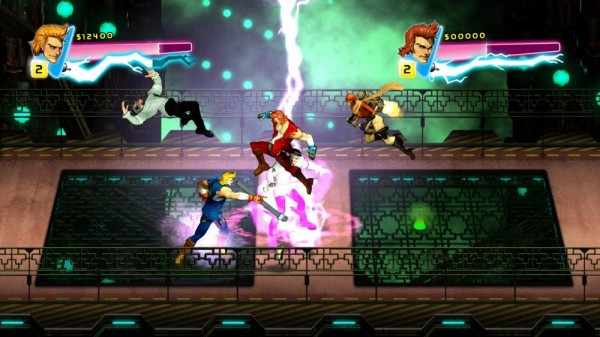 Variety is one thing that Neon also delivers in groves. Now, I say that compared to the beat ’em up games we know, as players need to still expect the same form of combat for the entire experience. Enemies however offer up the change of pace by creating a new form of hazard to get around. Some just punch, kick, and flip, while others are equipped with deadly projectiles and overpowered throws that can dominate Billy or Jimmy quickly if they head in unprepared. These foes will keep you heading into your menu to change up your own fighting styles and Sosetsitsu maneuvers, so be prepared to adjust to the difficulty on the fly. Again, this is not a negative at all and keeps a burst of fresh air blowing from time to time to squash that repetitive brawler feel. 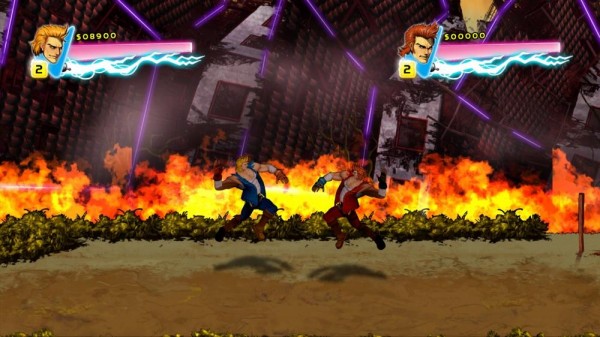 Since this is Double Dragon, the co-op mode is definitive form of playing Neon. Not a lot changes in terms of gameplay or plot while two have taken up the task to take down Skullmageddon and company, but there are a few extras for the pair of players. Billy and Jimmy can deliver high fives to split health, and can also revive eachother by performing a quick button tapping mini-game. I played through the game in both single player and co-op, and even though I loved my time spent with both, I must say that co-op is the more enjoyable of the two modes. After the game is beaten, replay value is still hefty as there are plenty of unlockables to be found and tapes can still be leveled up as harder difficulties become available.

Visuals and Audio
The art design within Double Dragon Neon is outstanding. Every classic enemy and protagonist alike have been redesigned to fit within this title, and the neon-lit environments are both detailed and delightful to see as the game progresses onward. Neon feels like the Double Dragon games of the past, but reminds us of it’s newness constantly with the high gloss finish that shines so brightly on every model and piece of city scape involved. 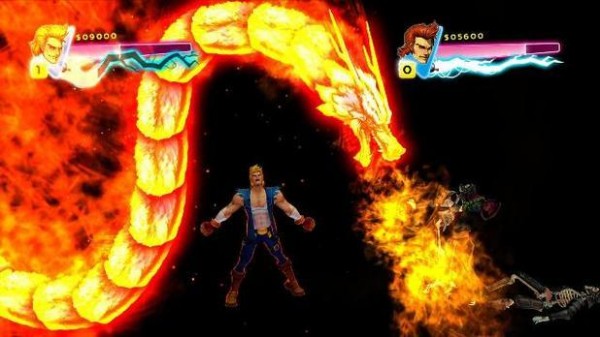 The Soundtrack however. Yeah. There are not enough words to describe the awesomeness that is Double Dragon Neon’s soundtrack. Each track sounds like it was just ripped off MTV in the 80’s, and each stage has it’s own tuned tailored to the present environment. Falsettos, guitar solos, bubble gum pop. It’s all here, and comes together to provide one of the best video game soundtracks to date. I know that statement is bold, but once you hear these beats stack upon this rad world, you are sure to feel the same within minutes…unless you have no soul of course.

Overall
Make no mistake about it. Double Dragon Neon is not a remake, but an entire reboot of a classic that is sure to capture the attention of anyone who spent their childhood tied up with cartridges and quarters. While this title is still a beat ’em up and proud of it, the extra features such as the cassette tape leveling system add in a ton of depth to a genre that rarely sees anything more than a special punch or kick. The music is in a category of it’s own and worth the price of admission alone due to the high level of quality and love sewn in by the retro masters at WayForward, and the new art style is just sweet icing on top of this fine, layered cake. It’s rare when a reboot can exceed the high expectations we hold for the classics, but Double Dragon Neon is so jam-packed with nostalgia, humor, and solid gameplay that it does that and more. Is it worth an investment? TOTALLY, BRO!