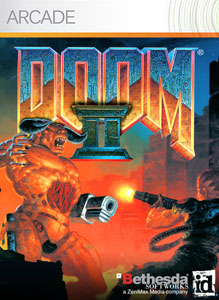 Story
“To save Earth, you must descend into the stygian depths of hell in DOOM II. Battle nastier, deadlier demons and monsters with your trusty Super Shotgun. Survive more mind-blowing explosions and take part in the bloodiest, fiercest, most awesome blastfest ever.

Recruit your friends and plow through nine all-new levels in the new episode, No Rest for the Living! Play solo or multiplayer over Xbox LIVE with up to four players. DOOM II includes split-screen co-op over Xbox LIVE, game clips, 5.1 surround Sound, enhanced graphics, and HD display support.” [Via Xbox.com] 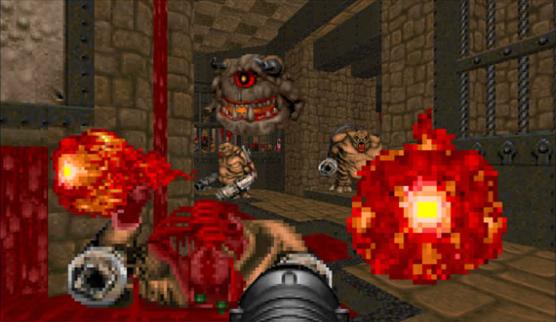 Gameplay
DOOM II is a very simplistic first person shooter. There is no aiming up or down, just left and right. Auto Aim takes a big role in killing the demons as well. Just place the demon in the center of your screen horizontally, and the auto aim will take over from there. Don’t let this fool you; however, the game is still hard and will beat you down into the ground if you get over confident. Sure there are easier difficulties, but the easier difficulties just give you more ammo and you get hurt less. Once you get to the harder difficulties the game gets extremely difficult but doesn’t lose its fun.

The goal of every level is to make it to the exit. The exit is usually a switch, but can sometimes be a teleport. DOOM games are famous for closet monsters, which means monsters will appear from hidden rooms that open up when you pick up an item, hit a switch, or walk to a certain location. Many people don’t like this kind of gameplay because it leads to some surprises that get you killed, but after you memorize all the closets the extra enemies aren’t bad.

DOOM II has a much larger number of enemies than its earlier counterpart. Hordes of enemies will attempt to kill you at times, and even on easier difficulties they can overwhelm you and kill you. Many DOOM fans won’t like the increased enemy count, but the core gameplay is still exactly the same.

The XBLA version of DOOM II includes a new “No Rest For The Living” chapter. This chapter lets DOOM fans experience something new with the classic look, while new players will have extra stuff to play. The new chapter is a lot of fun and supplies new secrets and new levels for you to kill demons in. I personally enjoyed the new chapter, because I had already played the original chapters to death. The new chapter also supplies incentive to actually buy the game because you can’t currently find it elsewhere. 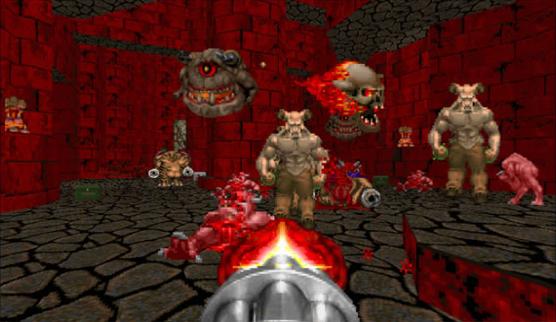 Audio & Graphics
The Audio and Graphics in DOOM II stay true to the original. Some people may view this as a bad thing, but any fan will appreciate it. The gore and enemies are pixilated and the audio consists of simple midi files that can’t even be fairly compared to modern day games. DOOM II is the original FPS, it is the gameplay and killing demons that makes it fun. Sure the game is pretty much a port of the original, but you can now play it on your Xbox 360 and it is still fun after so many years. 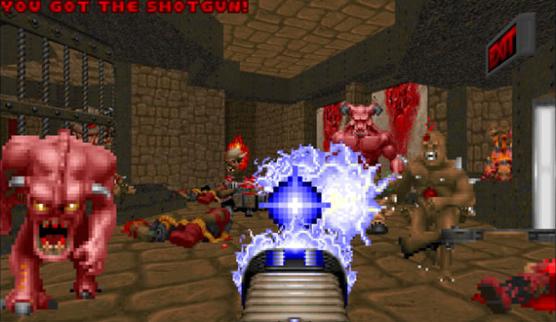 Achievements
The achievements found in DOOM II are a lot like those found in the the first one. Killing a cyberdemon with only your fists isn’t actually that hard if you know how to manage it. Getting 100 frags online is currently pretty easy if you do it early while people still play online, the online community will die soon though. Depending on your skill, beating all levels on Ultra-Violence can be pretty hard and can possibly be the hardest achievement out of them all.

DOOM II also has 2 avatar awards which can be seen in the video at the bottom. 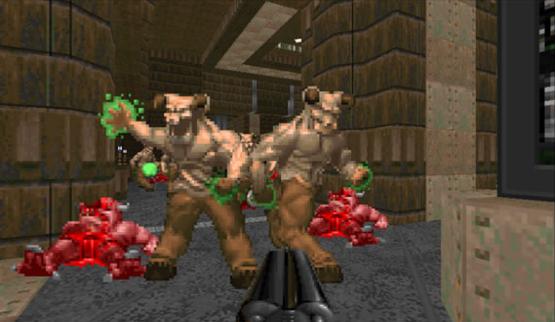 Overview
DOOM II is an awesome flashback from the past. Fans will appreciate the new chapter and new comers are able to see where the FPS genre started. For only 800MSP DOOM II is a fun experience that is definitely worth the purchase. Sure the graphics aren’t top notch but the game shouldn’t be judged by this due to it being a port of a classic game. With 2 chapters, online co-op and multiplayer; DOOM II is a lot of fun.
I give DOOM II