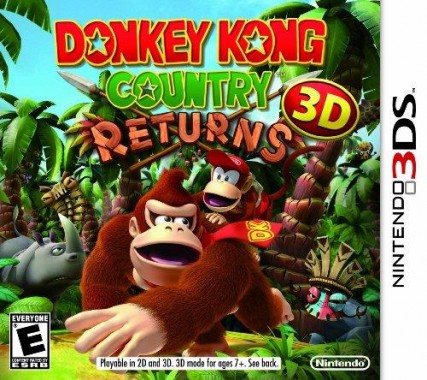 Overview
When Donkey Kong Country Returns launched on the Nintendo Wii, Retro Studios proved that they could fill the shoes of Rare and put on a great show with an old favorite. Over two years later, the big ape is back in the same title, but this time on a smaller platform. Donkey Kong Country Returns 3D drops one gimmick for another, replacing mandatory waggle control with an optional 3D aspect, and as you could imagine – this does make the game more enjoyable. The actual value of re-playing through the game however is sure to be the question for most DK fans out there, so does this return of a return bode well? Let’s find out.

Story
I don’t want to spend too much time on the story aspect of Donkey Kong Country Returns 3D, as if you played the original, you know the basics. The Tiki Tak Tribe are stealing all of the bananas on the island and hypnotizing animals to do their bidding, and it is up to our old hero do knock them down with his large fists. Diddy, Cranky, and a few old faces also come in to assist, but even with their inclusions, I felt like this tale just didn’t capture my attention like it did back on the Wii. 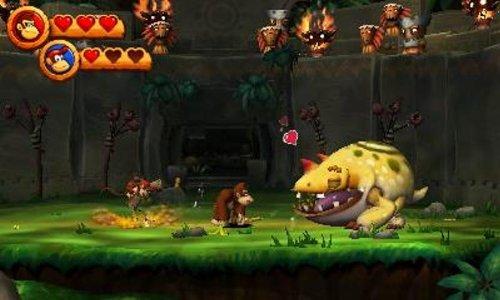 Sure, the plot is charming in its own little way, but the Tikis feel like a lesser enemy that just do not fit within Donkey Kong’s world. Back when I played the Wii version, the plot was new, it was fresh, and it seemed to flow well with the much more challenging Gameplay that DKC Returns offers. Since then however I have went back and spent a chunk of time yet again with the original three Donkey Kong Country titles, and I can say now that in comparison, this title just does not hold up in the same way the classics do. Compared to the maniacal robots and beavers of the past, the Tikis are a threat that don’t seem very threatening – yet produce a great challenge despite their “filler” appearance. As I said, I did like this plot the first time and don’t necessarily hate it now, but I do feel as if the plot was the afterthought of the game creation after experiencing it yet again.

Gameplay
I would honestly say you could forget about the plot, and forget about that whole spiel you just read about my loss of endearment with the narrative- just because the gameplay is even better this time around. Donkey Kong Country Returns 3D packs its punch with polished and perfected side-scrolling platforming, mixed with trial and error mechanics to ensure a challenge is had while players attempt to traverse to their destination. While the controls are tight, they do take some getting used to, as rolling now feels a tad un-natural due to the face button mapping, but with a bit of practice, players will get the hang of the game and be making tight jumps and bashing birds and other foes without even batting an eyelash. 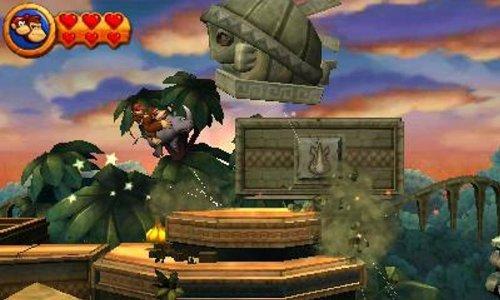 The waggle is also gone, replaced with nothing but buttons to do your dirty work for you. This means no discomfort will stand in your way, so it was nice to see that issues from the fans were addressed during this title’s second outing. Much like my opinion of the story, my personal perspective of DKC Returns also changed a tad with the gameplay – but for the better. Every stage feels completely different from the next due to the varied landscapes, which is able to keep the player on their toes with falling statues, random blast barrel placement, and portions where the player must suddenly slow down to succeed. Yes, the stages are cleverly crafted, and this port really captures that by enhancing accessibility to keep frustrations at a low. “New Mode” adds an extra heart, disposable power-ups from Cranky, and cheaper prices on balloons to allow even new players some relief from the difficulty spikes. 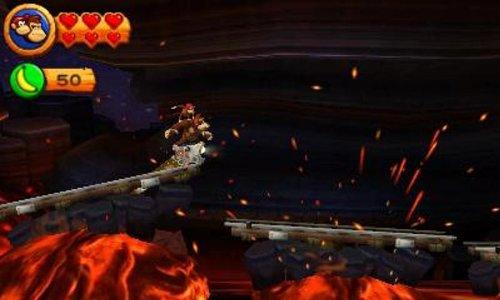 As I mentioned during my time with the first title, the difficulty in Donkey Kong Country Returns is a factor, but makes the game better in the end. For every mistake you make and death you rack up, it is truly just another lesson learned. Sometimes that lesson will be to slow down and be more cautious, while at other times it will be to judge your own timing and attempt to jump to that next platform with a more precise movement. The circle pad gives players more control of Donkey and Diddy, and with the organic challenge and more tools at hand to deal with rough spots, frustration is almost a thing of the past. Oddly enough, I would say a good contrast of Donkey Kong Country Returns 3D can be found within recent Sonic titles. Sonic has lost a lot of his fans due to the more recent level design. Sure, those 3D levels look beautiful and Sonic is still fast, but that franchise has stuck with using poor stage layouts that create an illusion of a challenge, rather than actually building a game that functions without breaking. Donkey Kong Country Returns delivers an experience that has teeth, but backs it up by keeping those choppers flossed and shiny throughout every world within the game. Bosses are genuinely fun to fight and utilize the in-game mechanics perfectly, and the mine-cart rides still bring excitement due to the test of reflexes involved. 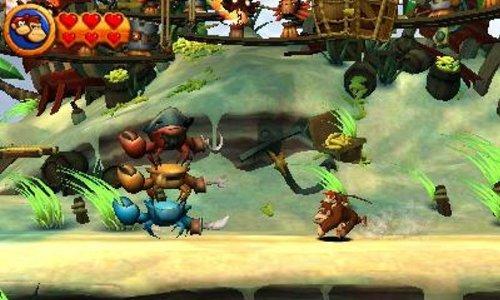 Just like the original, if you die too much, the game will basically show you how to do the level without error. We have seen this in many recent Nintendo titles, and just like the rest of the lot, Donkey Kong Country Returns 3D’s “EASY” function of sorts is purely optional, giving the player the choice to get unstuck at the cost of a bit of ego. Those wanting even more after finishing the game will definitely have the full package to partake in as well, with time challenges, a sack full of collectibles to be found, and a game that is still built to bring out the speed-runner in all of us. The replay value could be infinite if you let it, as there is always ways to challenge yourself within this port, and that is what made the first title so loved by fans and seekers of hard games alike.

Visuals and Audio
The Wii wasn’t the most powerful console on the market a couple of years ago, but Donkey Kong Country Returns was still a stunning creation in the graphics department due to the heavy use of shadow, color, and animation. The 3DS version spares no expense in attempting to bring the same to handheld owners, but is a little less appealing due to a small drop in framerate and size of the screen. If you do not have a 3DS XL (which I played this game on), there is a good chance you might have a bit of trouble playing Donkey Kong’s 3D adventure the way it was meant to be played. Remember in the first title where DK would shoot to the background? Well, on televisions – that worked well as we could still get the full experience without much discomfort to the eyes. When the 3DS version tries the same, it can be hard to make precise jumps due to the shrinkage of DK, and that can cause some unwanted deaths. The levels are just so big and have so much happening that the transition to a smaller screen just does not come off as natural as the Wii version in my eyes, but this can also be looked at as a preference thing as I imagine most will be able to spot their Kong just fine and make those jumps in the distance if they just slow it down a tad. 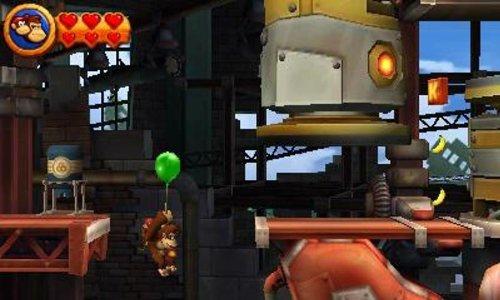 The soundtrack is still marvelous, thankfully. The remixed tracks from the classic hold up well on the 3DS, and those familiar tunes are made to bang on that nostalgia bone at full force, regurgitating charm from the old Rare franchise with the new gameplay experience on full display. The sound effects are also of high quality, with DK and Diddy’s little monkey chatter bringing their characters to life, and every enemy having their own little chirps and roars to give them a unique presence. I might even say that even though this is just an upgraded port, it still outshines many other original titles we have seen Nintendo put on the 3DS based off audio alone.

Overall
Donkey Kong Country Returns 3D is a game that didn’t need to happen, but comes to the 3DS almost effortlessly, bringing with it some of the most polished platforming we have seen in decades. Yeah, my opinion of the plot has changed, but if you have yet to experience the game, there is no better way to do so than with the portable port that gets it right in almost every way. Rare created a legacy for Donkey Kong and changed the way platformers play. We will never see that version of the ape again however, and Donkey Kong Country Returns 3D acts as a wonderful second look of what the future holds for one of Nintendo’s most beloved mascots. Gameplay over gimmickry is something Nintendo have been showing us during the past year, and if you are looking for a pure piece of quality to add to your library at an already discounted price, its time to go Bananas all over again with the king of swing.