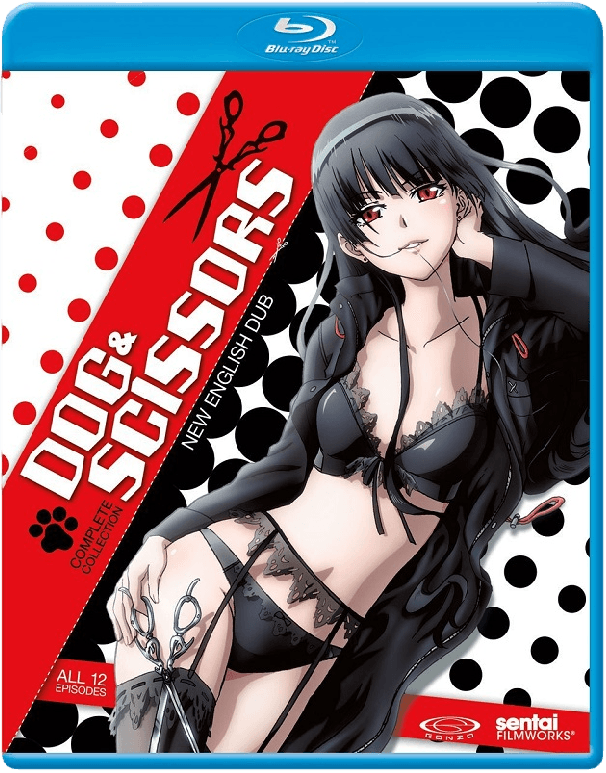 Overview
Attempting to find a unique element and run with it can be difficult in the world of anime when nearly one hundred anime series air every year. One way to do this is to try and shock viewers by killing off a lead character or creating a unique twist. Back in 2013 Dog & Scissors didn’t exactly set the world on fire but it did try something different and now Sentai Filmworks has not only released Dog & Scissors in the West, they have released it a second time and this time around it comes with an English dub. So is this comedy series with a unique twist worth watching?

Story
Kazuhito Harumi is a high school student so obsessed with books that he spends the majority of his life with his nose in a book. He chose to remain alone in Tokyo after his family moved to the countryside so that he could remain close to his books and pick up every title when it is released. In fact he uses his connections with his apartment manager to live in the complex for free while using his parents’ support money to fuel his love of reading. 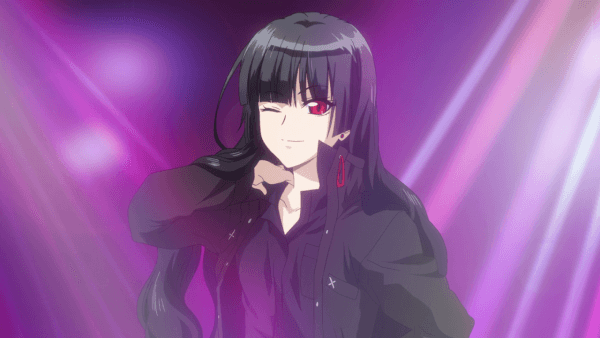 While Kazuhito tends to forget the world around him as he reads, he always seemed ready to help those close to him and lived a fairly standard life. That is until a restaurant he is in is robbed by a twitchy criminal with a shotgun. While nearly everyone obeys the criminal’s orders, a strange dark haired woman is absorbed in her writing and doesn’t even acknowledge the fact that the criminal is about to shoot her.

In an attempt to save this complete stranger, Kazuhito intervenes and tries to disarm the criminal only to be shot and killed in the melee. Unwilling to let himself pass on without finishing a series of books from his favorite author, Akiyama Shinobu, Kazuhito’s soul somehow ends up inside of the body of a dachshund that possibly passed away in a storm and was taken in by a worried pet shop owner with a giant afro. 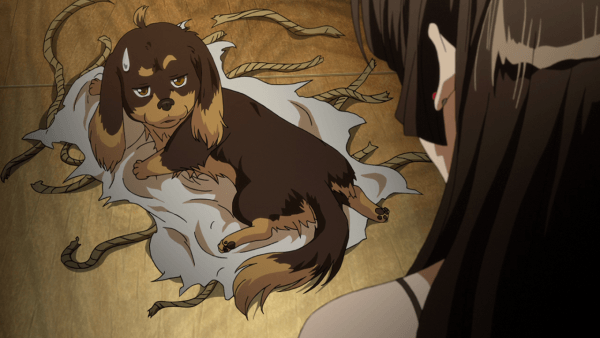 Stuck in a cage for over a week, Kazuhito tries to get used to life as a dog but his obsession with reading is reaching a critical breaking point as he has had nothing new to read since waking up. Interestingly enough, this changes when the same girl he tried to protect during the robbery shows up at the shop, threatens the owner with a special pair of scissors and takes the dog into her ownership. Here we learn that this woman is Kirihime Natsuno, a very wealthy author who happens to write under the pen name of Akiyama Shinobu, making her Kazuhito’s favorite author.

Things get even stranger when Natsuno reveals that she can understand everything that Kazuhito thinks and that is how she tracked him down. With a sadistic streak a mile long and a pair of possibly unbreakable scissors to cut and sheer with, Natsuno finds great pleasure in torturing Kazuhito but there is more to this relationship than meets the eye as the pair starts to live together. With Natsuno trying to continue her writing and come up with the final book in her longest running series and Kazuhito coming to terms with his death and new life, Dog & Scissors has a rather interesting premise. 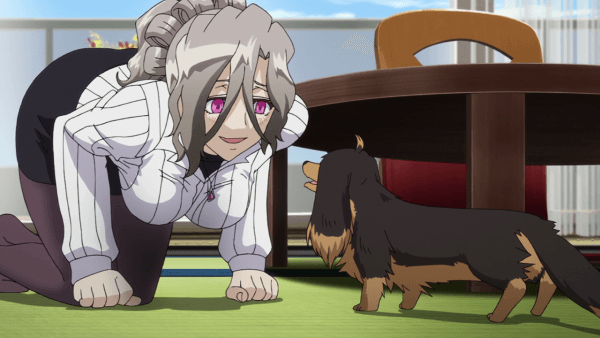 Unfortunately it becomes something of a mess from there as the series finds itself rapidly switching from dealing with either Kazuhito’s friends or family mourning his death or Natsuno’s life as an author to absolutely absurd situations that are impossible to predict in a blink of an eye. Dog & Scissors’ unpredictable nature is to be commended as a comedy series such as this really draws a lot of laughs thanks to how ridiculous things can become thanks to the over-the-top personalities of the cast.

In fact, Dog & Scissors takes plenty of shots at itself as Kazuhito generally plays the straight man that points out just how strange events are. Of course when you have a deranged murderer mimicking fake fighting styles he read from a book, an editor so masochistic she begs to be cut and insulted by Natsuno, a yandere bro-con sister that wields a transforming weapon that is described as a “cooking tool,” and that is only the start of things as very few characters in this series act relatively normal. 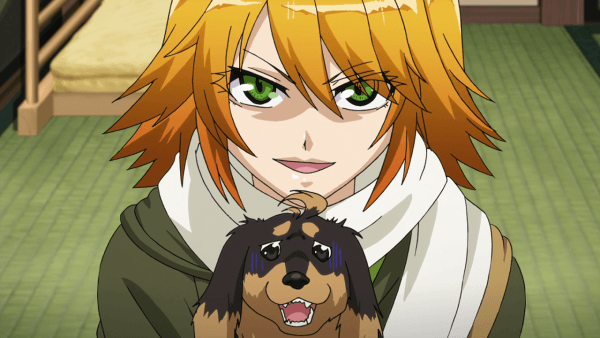 Thanks to the way that the series refuses to take anything serious outside of a few emotional moments, such as Kazuhito and his sister or Natsuno attempting to help Kazuhito get revenge, there really isn’t much plot progression in Dog & Scissors. In fact, other than a few story arcs introducing girls that were in Kazuhito’s life before he became a dog, very little is actually explored over the course of the series and both of Natsuno’s writing rivals are barely introduced and are instead used as gags, with one being an idol constantly proclaiming that she is shining brightly and the other never appearing outside of small teaser moments. 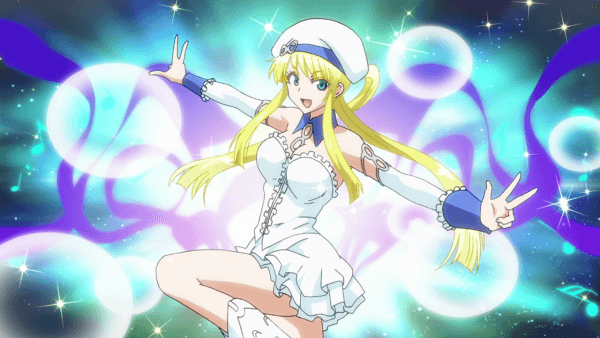 That being said, it is the interactions between Kazuhito and Natsuno that really make this series worth watching for those willing to watch a comedy series that is almost too ridiculous for its own good. Natsuno makes for an intimidating sadistic lead more than willing to cut away large swathes of Kazuhito’s hair any time he does something to anger her, such as calling her out on her flat chest or being pet by other women. It becomes quite obvious over the course of the series that Natsuno bears strong feelings for Kazuhito as she continuously tries to tempt him into coming onto her despite his canine form and this usually results in her using her trademark scissors on him to take out her frustrations when he doesn’t make any advances. Watching these two go back and forth with one another and occasionally seeing Natsuno reveal how she feels deep down is one of the highlights of the series, though sadly the lack of any driving focus and general randomness will mean many will likely pass Dog & Scissors over.

Visuals
I must say that before watching Dog & Scissors, the idea of a dog as a main lead seemed like it would be difficult to pull off. Thankfully the way that Gonzo has managed to draw and animate Kazuhito’s dachshund form turned out quite well and his canine expressions are the source of quite a bit of humor, especially when he is panicking due to the events unfolding around him. As for the other characters, the core cast is nicely designed and many of the characters have unique looking features while Natsuno makes for a striking female lead and there are plenty of side-characters with comedic designs. 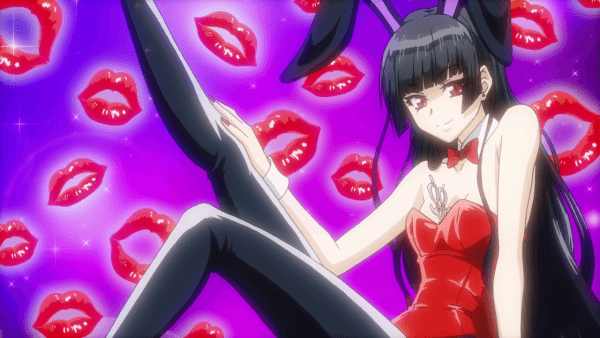 That being said, the actual animation quality is rather simplistic as the characters are rarely shown moving and even the few action sequences feel uninspired. It doesn’t help that the backgrounds are as standard as you can get, though I must say that Sentai Filmworks did a nice job adding plenty of translations to the various signs and floating text that appears throughout the series. As far as fan-service goes, the series is rather limited in that factor other than a few times Natsuno tries to tempt Kazuhito.

Audio
This is the second time that Sentai Filmworks has released Dog & Scissors in North America and this time around it comes with an English dub to go along with the standard Japanese voice track that was found in the original release. This English dub comes as a bit of a surprise due to the nature of the series but it turns out to be a pleasant surprise as the English voice cast handles their characters nicely and the jokes feel like they have more of an impact this time around thanks to the dub. 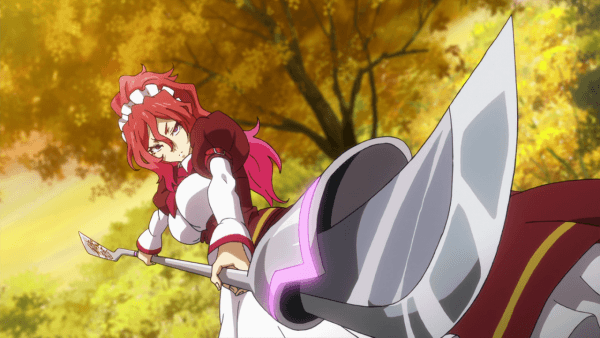 It is worth noting that the various insert songs featuring Japanese lyrics, such as the songs sung by Maxi and Sachi, remain in Japanese. As for the rest of the background music, it is fairly standard for a series such as this one. Thankfully the opposite can be said for the opening theme “Wan Wan Wan Wan N_1!” by Inu Musume Club (the voice actresses for the series) and ending theme “Lemonade Scandal,” sung by the Japanese voice actress for Maxi, as both themes are set to gorgeous looking sequences and the songs themselves are quite memorable.

Extras
With this English dub release of Dog & Scissors the only special features come in the form of clean opening and ending themes alongside some trailers for other Sentai Filmworks anime.

Overall
A lot of what makes Dog & Scissors enjoyable will depend on the viewer’s sense of humor. The unpredictable nature of the show plus the fact that the series doesn’t take itself seriously and openly calls itself out on how ridiculous things become is one of the highlights while most of the comedy comes from Kazuhito and Natsuno’s exchanges. If you happen to like a comedy that is all over the place and has the leads in a unique situation then Dog & Scissors is for you, just don’t expect anything extravagant to happen.