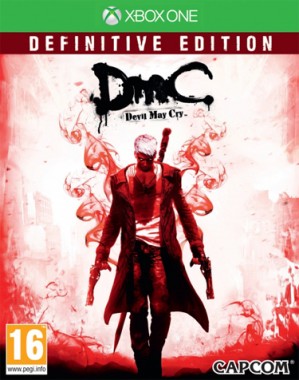 DmC: Devil May Cry was an absolute smash hit when it dropped back in 2012, and we here at Capsule Computers absolutely loved it. Sure there were loyal fans of the franchise who felt the reboot was not only unnecessary, but cheapened the franchise, but for the rest of us DmC was an incredible amount of hack and slash fun. Now the game has been re-released onto the next generation of gaming consoles as the DmC: Devil May Cry Definitive Edition and comes with not only the base game, but the equally exciting Vergil’s Downfall chapter that was previously a DLC exclusive. However the question still remains; is DmC Definitive edition worth a purchase, or are you fine with your 2012 copy of the game? The answer is that if you already own the game and all of its DLC then there isn’t much new here, however the new visual upgrades, 60fps frame rate and new difficulty means that this really is the definitive edition of the game. 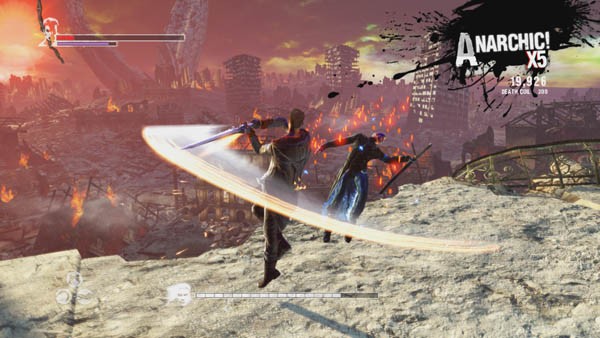 DmC: Devil May Cry is a reboot of the hugely successful Devil May Cry franchise, and recasts our protagonist Dante as a more youthful and dare I say more brash version of himself. This is a Dante that hasn’t spent his entire life hunting demons and has instead used his skills to woo the ladies. Thankfully when starting off with a clean slate like DmC does, it allows for a tonne of character development through the narrative, and as we continue through the story, Dante grows and matures as a character. It is definitely a subtle growth, one that you likely wont really notice while you are playing but come the end cinematic you will be looking at a completely different Dante than the trailer trash womaniser from the beginning of the game. 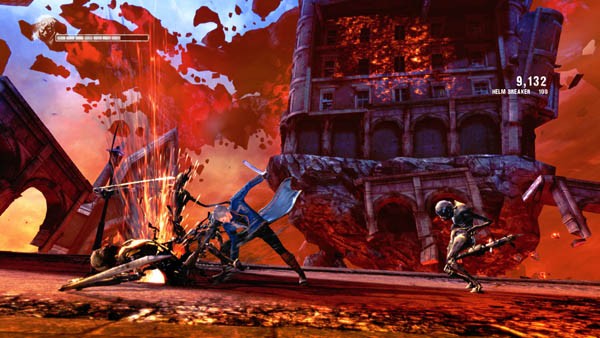 The Definitive Edition also comes with the Vergil’s Downfall DLC which takes place after the climactic final battle of the main campaign. Vergil’s story isn’t as long as Dante’s but we still see the same level of maturity and character development here. The best part is that Vergil is an absolute villain, so we get to play a hugely different roll than the one Dante filled. Vergil’s Downfall is filled with a lot of incracies and back-story that help shape not only the character of Vergil himself, but this whole new DmC world. 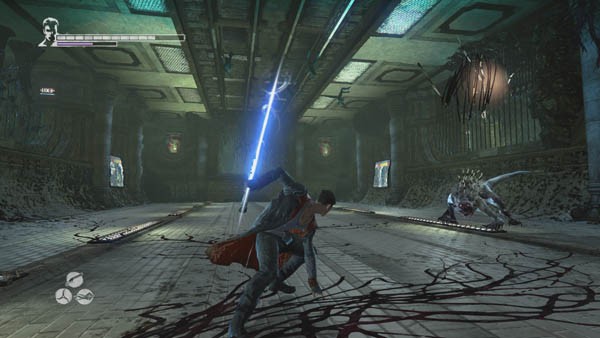 We all know the gist by now don’t we? The Devil May Cry franchise are a series of games that are all about one thing: action. Well two things, action and being incredibly stylish. Dante is equipped with his Rebellion greatsword and his two pistols: Ebony and Ivory. With these three weapons (and a few more that he unlocks along the way), Our stalwart demon slayer will be able to string together insane looking combos in order to lay waste to his foes. The core mechanics don’t deviate much from the 2012 original, aside from a harder difficulty option and the new manual targeting system.

Like most action games, DmC is incredibly skill intensive, strong and weak attacks are mapped to different buttons (and your guns and additional weapons mapped to others) and you will chain together your strikes in order to not only deal as much damage as possible, but also to ensure that your kill looks as awesome as it can. The variety of your moveset and how quickly you strike all impact on your overall rank for the fight. DMC players will be well aware that the ranks use a letter system that goes D-C-B-A-S-SS-SSS (with the latter awarding the most points). 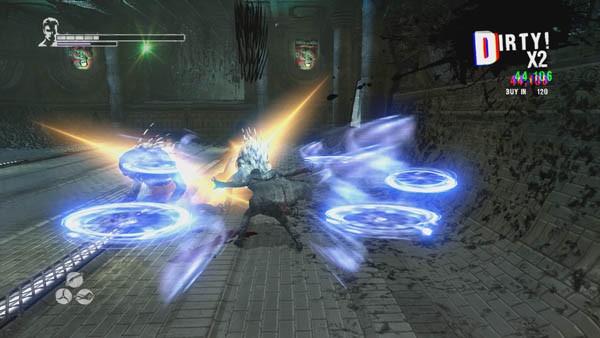 Those who are more familiar with the older Devil May Cry games might find themselves getting higher ranking combos almost too easily. I know that when playing DMC3 that I struggle to get higher than a B ranking, but when playing DmC I am getting A’s and above almost without trying. This is a double edged sword as on one hand the game feels easier, while on the other hand, I felt like an absolute bad-ass as I tore through the army of the damned.

Bloody Palace mode also makes a return, and offers players a chance to mow down hordes of enemies at their leisure. Separated into 101 different stages, the bloody palace definitely put me to the test, and I struggled to complete the entire palace. New to the Definitive Edition, Vergil gets his own Bloody palace mode to play through, leading to more than 200 different levels. Not a bad way to keep me entertained long after finishing the campaign I must say. 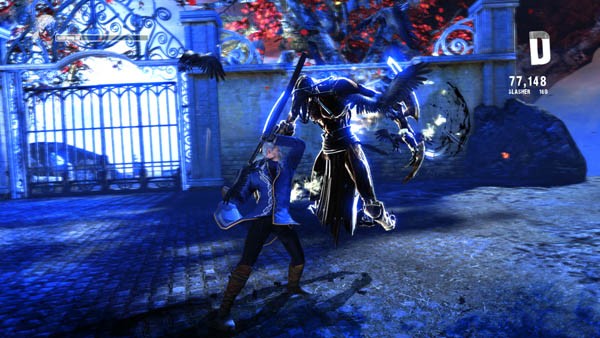 Since this is a remastered edition, you would expect that the visuals have been kicked up a notch, and you would be correct! Everything has a slick coat of polish over it that makes it look absolutely beautiful. The

While I could talk about how the little changes to the visuals make all the difference, what really makes this game stand out from the original version is the 1080p/60fps presentation. For years I have never really understood the need for 60fps, but after seeing a game like DmC in action, the differences are astronomical. The movement of Dante and his adversaries just look so much more fluid and timely, really adding to the otherworldly feel of the game. 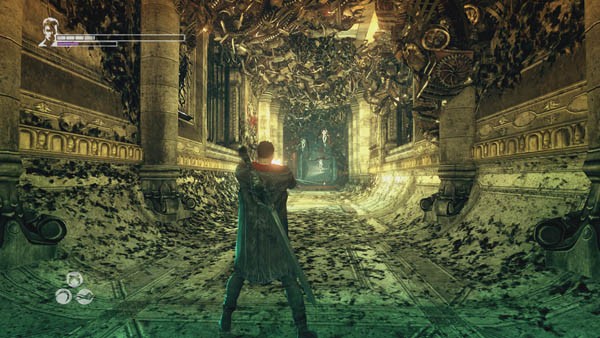 In terms of audio, not much has changes here and the game still sounds almost identical to the 2012 version. Characters all have voices that suit their look and delivery is energetic and well-acted. One thing I noticed is that one or two scenes were cut out of the original, this is especially noticeable in the opening cinematics and while it would be a bit jarring if you have played through DmC a few times already, it doesn’t change the overall tone or feel of the game. 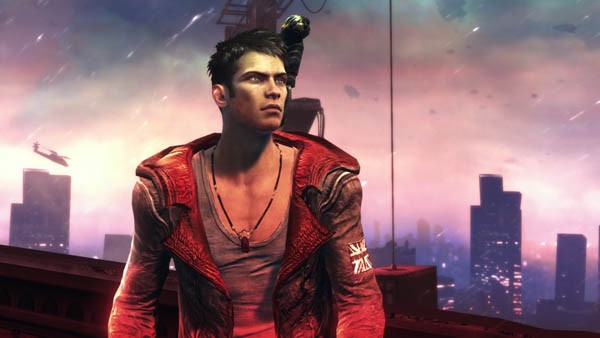 I’m not exactly a supporter of all of the remakes and rereleases we are getting for the Xbox One/PS4. It seems that every single game that was popular on 360/PS3 is getting remade for the new hardware. However, I was more than impressed with DmC’s Definitive Edition. The inclusion of all of the game’s content in one package certainly helped, but the few gameplay tweaks like the manual aiming and harder difficulty really help sell me on the whole thing. However, the game’s visual presentation needs to be praised above all else here – the 1080p/60FPS really makes DmC: Devil May Cry Definitive Edition feel slick, stylish and absolutely sensational.

Eagle-eyed readers out there will notice that we have scored DmC: Definitive Edition lower than the original, despite claiming it was a superior version of the game. This is due to the fact that the two versions were reviewed by two different people and as such their thoughts and opinions are different from one another. We apologise for any confusion.