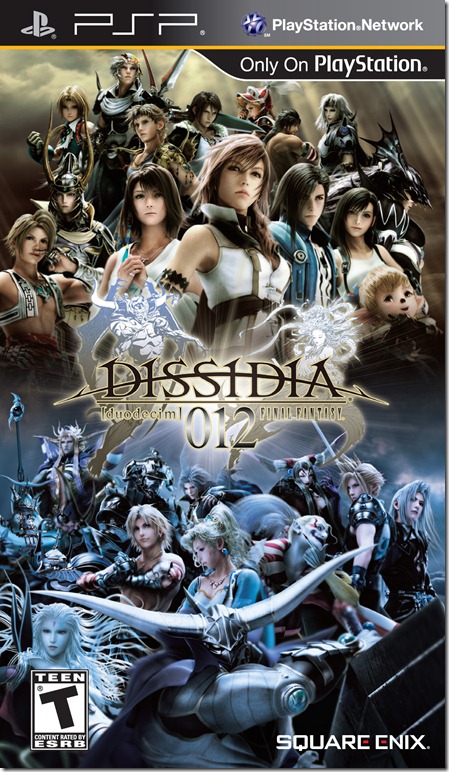 Overview:
Dissidia 012[duodecim] Final Fantasy is already a pretty hefty title nowadays when some games only end up getting one maybe two word titles. But that isn’t what sets this title apart of course, what sets it apart is the fact that the Dissidia series brings together characters from every single Final Fantasy game and the fact that they are all at your fingertips to do battle with one another. Now it’s been a year and a half since the first Dissidia was released, does Dissidia 012 shine a new light on the series?

Story:
Characters from every Final Fantasy game sounds like a great idea at first. The only problem is how to tie every character together in a meaningful way. Unfortunately that is something where Dissidia 012 falls short at. Dissidia 012 is a prequel to the original Dissidia and begins with one of the newly added characters and most recent addition to the Final Fantasy series Lightning and her group as they join the side of Cosmos. The mission of the Cosmos fighter is to do battle against the fighters assembled by Chaos whom are also a collection of Final Fantasy characters.

The story is told through a number of cutscenes which involve the characters talking to one another or preparing to enter battle with one another. With so many different characters drawn together to the battleground there really isn’t a whole lot of story to go on. Sure there is actually a long story that happens throughout the game and Final Fantasy fans will be interested to see various interactions between the characters but unfortunately the story doesn’t have enough structure to hold up the little weight it has. 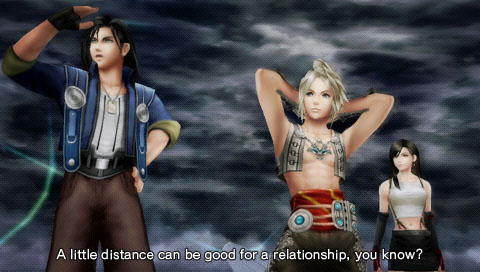 The storyline is very thin and at best it can be seen as something simply to place the characters in a situation together without having to say it was done strictly to see who could defeat who. Practically nothing that happens in the storyline is worth mentioning and often the conversations that the characters have with one another can be seen as idle talk between battles with little redeeming value.

Graphics:
Ignoring the storyline, Dissidia 012 has nothing to be ashamed of as far as looks are concerned. The graphics are simply fantastic especially for a title on the PSP. The overworld is suiting for the most part with enough detail to show which each place is and have various structures and environments the players can walk through but the true gem are the characters and battlegrounds.

Every character, even the old ones which used to be nothing more than a bunch of pixels placed together have been fully upgraded to polygonal beauty. Some may be worried initially that the downgrade of Lightning, whom has taken the stage on the Xbox 360 and PlayStation 3 before would take a major hit after being placed on the PSP but surprisingly still looks impressive and matches the rest of the characters perfectly.

The fighting animations are top notch despite some of the action going on at times. The battlegrounds themselves are great to look at and have destructible environments which are certainly a highlight when your fighter crashes through a pillar to take down the enemy.  The stages on the other hand don’t have a whole lot of variety which is a minus as many bare distinct similarities with one another. 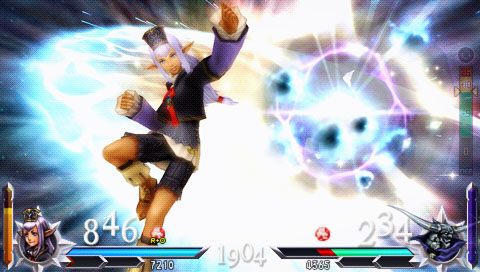 Also it is worth noting that the camera has not improved much since the previous game. There are a number of times in the more confining areas that the camera begins to perform badly and struggle to show the action happening on screen. Also it means that there are times you will be beaten around and thrown across the screen without any idea what actually happened to you or any chance to stop it because of camera obtrusions.

Audio:
Without a doubt a game that has a roster spanning every Final Fantasy means that the soundtrack would be superb and Dissidia 012 doesn’t disappoint. Some of the best songs from each Final Fantasy game are included and can be chosen between as you wait for the game to load up the battle sequence. Considering the fact that Final Fantasy games have an impressive musical score to draw from this means you have your pick of great music.

As for the characters themselves their voices, if they had them, are as memorable as anyone can remember. The actors performing the voice work do a great job to voice each character despite the disappointing dialogue they had to work with in the storyline.

Gameplay:
Now anyone who has touched the first Dissidia game will immediately find one of the more significant changes to the game as a whole and that is the overworld. For the most part players will still navigate between areas and story battles through a grid system but rather than jumping around the grid between battles you will traverse the overworld instead. In the end this may have just appeared to be a feature added to help flesh out the story mode but regardless of that it still is a nice addition overall. 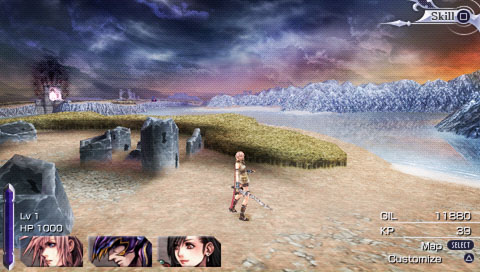 The overworld will feature Moogle Shops and treasure chests that the player can acquire items from and use on their characters to help strengthen them. Random battles also occur on the overworld in the form of manikins as well as shining lights that allow the player to use special chain skills in the battle grid and achieve more rewards from their consecutive fights.

Also something added to the game’s story mode and battle grid is the Party Battle feature. As the player advances through the storyline they will of course run into enemies that are in groups and will want to fight as a team. This means that players will do battle with the other teams’ party and defeat them in order to advance. This is done by either having the player fight fighter against fighter with the next fight featuring two different fighters or having the player use the same character until it is defeated and then switching to the next fighter in their party. This is a nice addition which helps emphasize the fact that there is a lot of action going on. Nothing feels overly forced upon the player and a helpful tutorial is there when needed to introduce the player to the fighting mechanics if they are new to the game.

The fighting is of course where the money is in Dissidia 012[duodecim] Final Fantasy. The meat if you will. Players do battle on an open field where they can either choose Action or RPG style battles. In RPG battles players will fight according to instructions given by the player but mostly control themselves. The real fun however is the action battle. Players have complete control of their character and are able to dash through the air, run up and down walls, slide on rails and of course simply charge towards the enemy.

Combat is performed through two separate numbers which show the player’s hit and bravery points. Hit points are of course self-explanatory and the first fighter to drop the other’s point value to zero wins. But what is unique with the Dissidia series and remains true in Dissida 012 are the bravery points. The bravery points have two different meanings. One they are meant to show how much damage a player can do to the other player’s HP by using one of six customizable HP damaging attacks, and also show the fighter’s overall defense. 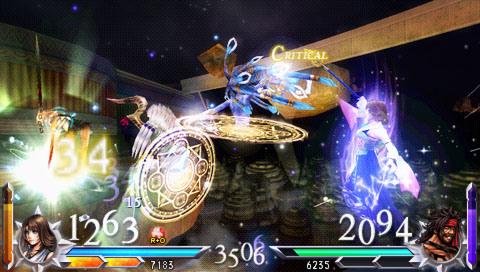 The direct objective of every battle is to lower your opponent’s bravery counter by hitting them with one of six also customizable bravery attacks which will not only lower their bravery amount but raise your own. When a fighter is brought to a Bravery Break, meaning zero bravery, the fighter who caused the break will be able to perform devastating HP attacks and can at times drop the opponent’s health significantly with one blow.

Also returning are the EX attacks which are special moves that every character in the game has that is unique to them. When a player does damage to an enemy or receives their own, small blue orbs appear in the air and whoever gathers these orbs will raise their EX Gauge and a full gauge allows the fighter to enter the EX mode and possibly perform a devastating EX Attack which is visually impressive and can turn the tide of a battle. Players can also use EX Mode to reverse their misfortune by activating it on the defensive, called Ex Revenge. Ex Revenge deals heavy damage to the enemy while stopping them from pounding you into the nearest wall.

A lesser but noticeable new addition is also the inclusion of an Assist meter which allows fighters to have an assistant jump into battle and perform a certain skill/attack to help out the fighter they are assisting. The Assist meter is filled by landing consecutive attacks on the enemy which means if you do manage to gain the ability to call in your assistant it is a tactical choice. There is also an Assist Break which occurs when your assistant is attacked in battle and locks them from entering for a moment. A handy feature of the assist option is the EX Break ability which means Assist characters can be called in to stop the enemy if they are in EX Mode and steal bravery points from the enemy and adds them to the player’s total which furthers the tactical advantage of having an Assist character waiting in the wings. 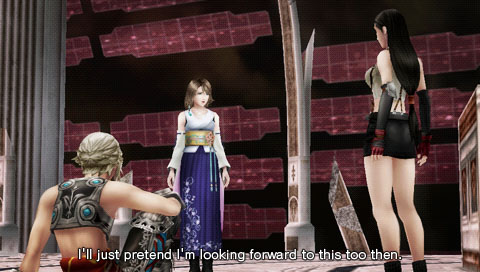 If all of this sounds confusing it can be at times but the learning curve is actually not as steep as it seems. Through being able to do one on one battles with fully customizable characters you can easily train your fighting abilities without worrying too much about the outcome. There are also countless items to unlock and to purchase from the store, whether it be additional playable characters, costumes, stages to fight on or even experience boosters to level your characters there are tons of things to do and plenty of options outside of story mode.

Overall:
Dissidia 012[duodecim] Final Fantasy may not have the best story around but honestly the title features so much more beyond the storyline itself that you will be hard pressed to put it down. With almost a never ending stream of unlockable content, impressive graphics and the enjoyable fighting mode Dissidia 012 is certainly the game for anyone looking for an in-depth fighting game on the PSP. Also if you are a fan of Final Fantasy then you will certainly be pleased with the new character additions to the roster to flesh out the already impressive roster.

I give Dissidia 012[duodecim] Final Fantasy

A review copy of this title was provided by the publisher for reviewing purposes.