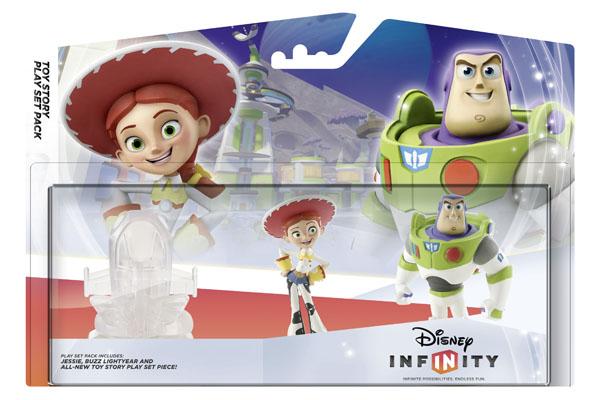 When Disney Infinity launched, it came included with three Play Sets to enjoy; The Incredibles, Pirates of the Caribbean and Monsters U. In addition, two more Play Sets were available for purchase in the form of Cars and The Lone Ranger. Now, Disney have given us the last, and easily the best set of them all – Toy Story in Space. Toy Story in Space is a well designed, enjoyable experience that Disney Infinity owners should definitely not miss. 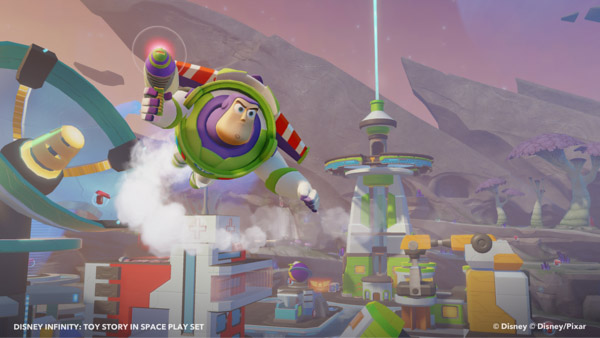 Toy Story in Space features Woody, Buzz, Jessie and the rest of the crew from Andy’s bedroom as they work together as official Rangers of Star Command in order to help out the Pizza Planet Aliens get started on their new homeworld. The story is fun and all of the characters are well presented, but there is a sense of confusion in the story telling. In one sentence they will be official members of Star Command and in the next Hamm is explaining how he read all of Andy’s textbooks as he grew up. However at most times they are presented as actual rangers of Star Command and not toys being played with.

The lack of emphasis on the toy aspect of the characters, it can be a little jarring if you are a fan of the films (and really, who isn’t?) and with Disney Infinity’s strong focus on being a digital representation of the imagination and fun of a child at play, having the Toy Story crew NOT be presented as toys feels like a hugely missed opportunity, not to mention going against a lot of what the characters stand for. While there is a very worthwhile payoff at the end, for most of the campaign, I found myself wanting to scream “YOU. ARE. A. TOY!” 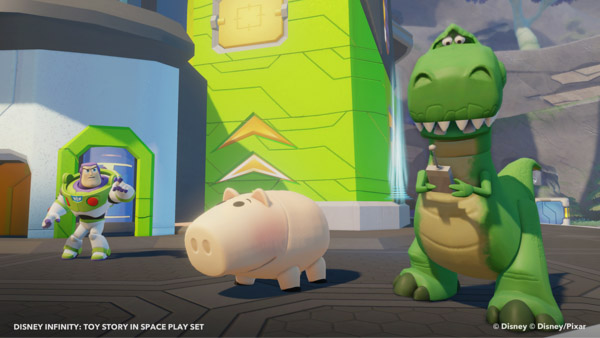 The gameplay for Toy Story in Space is very similar to the other Disney Infinity Play Sets by drawing inspiration from popular games and genres to create a well rounded experience for players of all ages. Toy Story in Space is a mixture of third person shooter and an old school platformer.

You will complete different missions given to you by various members of the Toy Story Universe. The missions are separated into three main categories; exploration, town building and space ranger training. Exploration-style missions will have you traveling over Toy Story of Terror’s impressively sized map. As you gain more packs, you will gain access to more of the game’s map. Occasionally you will be told the locations of various crates, the contents of which allows you to progress to the town building portion of the game.

The plot revolves around designing and populating this town for the planet to the aliens to inhabit, so as such it is a big part of many missions. After calling down some ground panels, you will have to scale the now-floating platforms to reach a self-assembly button at the top. Once you have made the ground, you can purchase pre-built buildings from the Toy Store and place them. These buildings once placed will usually offer you more missions to complete; such as the costume shop for decorating your aliens, and the Space Ranger Training Center.

The Space Ranger Training Center houses the Play Sets’ primary missions. There are a tonne of missions with pre-built gauntlets to charge through. These gauntlets will contain Zerg-Bots and other enemies for you to vanquish and points to collect. Once you have compeltey a mission, you will be able to go back and complete it again whenever you choose. This gives the Play Set a lot more replayability than previous Play Sets.

Much like the other Toy Boxes, Toy Story in Space offers players a wide array of additional toys and packs to use in the Toy Box mode. Finally, players have access to the Grow and Shrink Rays as well as Buzz Lightyear’s wings. These toys offer a heap of versatility and alternate ways to play and create that can completely change everything. 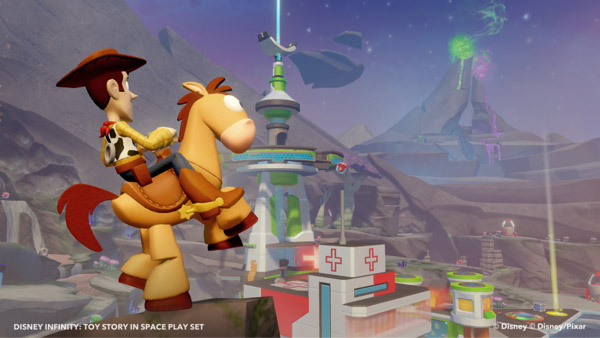 Being effectively an expansion pack, Toy Story in Space follows the same art direction and style as the rest of Disney Infinity. The characters have all been redesigned from their film appearances to better fit the game’s aesthetic. However, the art style of the game has allowed all of the characters to feel like they always looked the way they do. The art style also allows the characters from Toy Story to fit in perfectly with the rest of the Infinity roster.

One part of the visuals that really do stand out are the settings and locations. The space setting leads itself to a lot of interesting visual quirks. Bright colours, especially blues, purples, greens and oranges litter the world and really give it that intergalactic feel. 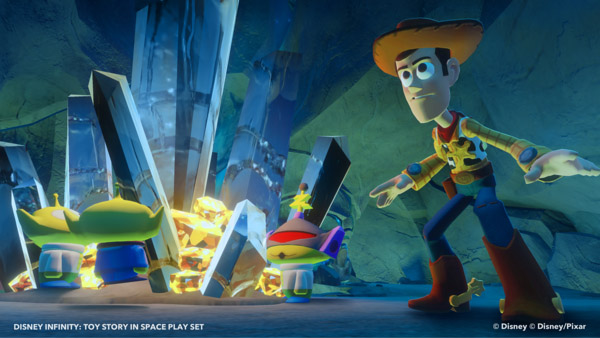 Sadly, many of the voices that you know and love from the Toy Story film franchise don’t make an appearance here, with notable exceptions being Wallace Shawn (Rex), John Ratzenberger (Hamm) and Andrew Stanton (Emperor Zerg). However, while the replacements are not quite pitch perfect replacements for the original actors that gave life to these characters, sometimes it can be really hard to tell them apart. This is especially true for Stephen Stanton’s Buzz Lightyear, who at times I could swear black and blue that it was Tim Allen.

The sound effects and background music are all for the most part really well done and fit in well with the rest of the Disney Infinity Play Sets. However, if there is one downside to the audio it is the Pizza Planet Aliens. Even though they have always been designed to be annoying, they often take it way beyond tolerable here. Having an alien in its high pitched, grating voice constantly asking you to fulfill its lifelong fantasy of catching a ball while you are trying to make your way up a set of moving panels gets really distracting and downright frustrating. 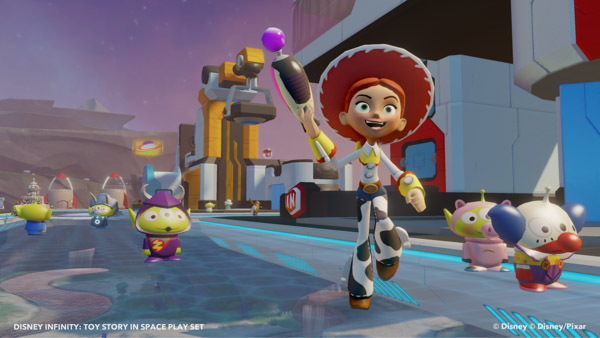 Toy Story in Space comes pre-included with everything you need to round up the crew and save the Pizza Planet Aliens from their own incompetence. You will get the Play Set Piece, which when placed on the Infinity Base will allow you access to the Play Set. In addition, you get two of the three playable characters; Buzz and Jessie. Buzz and Jessie are excellently crafted and painted so as to retain all of their individual character traits and appearances, as well as fitting them in with the rest of the Disney Infinity collection. Jessie, Violet Parr and Holly Shiftwell all stand side-by side and look like they belong together. 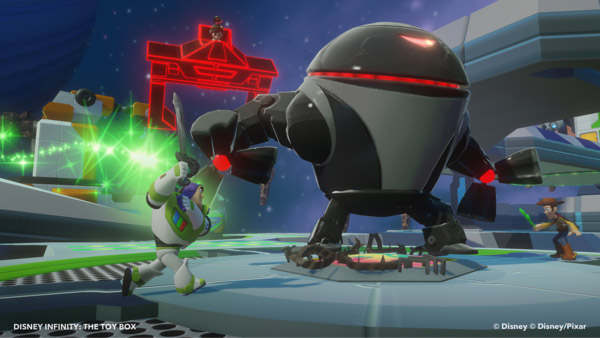 As the last of the currently announced Play Sets, Toy Story in Space definitely does its job well. The gameplay is a lot of fun, and many of the missions feel tighter and better designed than the other sets in the series. While the lack of focus on the characters being Toys is disappointing for the franchise as well as feeling like a missed opportunity, the characters themselves retain the same actions and mannerisms as their film-counterparts. So if you are a fan of the Andy’s Bedroom Gang or are looking for a great next installment to your Disney Infinity collection, then Toy Story in Space is goes to Infinity… and beyond!