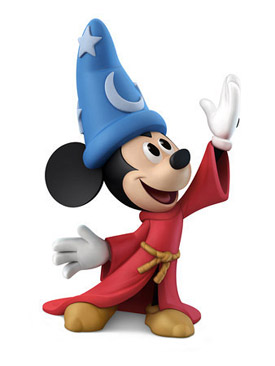 Since its launch last year, Disney Infinity has seen the release of 26 different characters, encapsulating the past and present of some of Disney’s biggest franchises. However, there was one character missing from the bunch – The King of Disney himself, Mickey Mouse. Although appearing in the beginning segment of the game, Mickey was unable to be used as a playable character – until now. Sorcerer’s Apprentice Mickey is a fantastic addition to the game, and a welcome change of pace in the roster that was mostly filled with characters from the last decade. Suffice to say, he was well worth the wait. 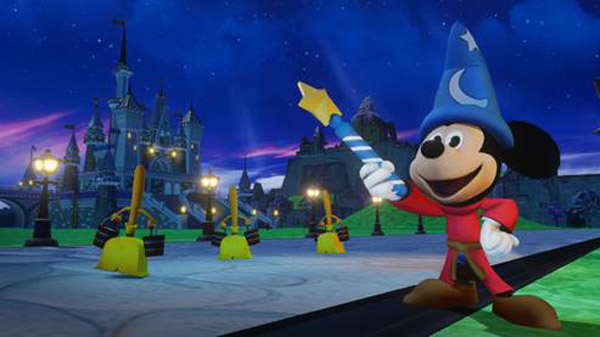 Firstly the figure itself is pretty tall. While Mickey himself is no basketball player, his Sorcerer’s Hat really adds a fair bit of height. While he still doesn’t reach the shoulders of figures like Davy Jones or Jack Skellington, he is a little taller than characters like Randall or Dash. Great things come in small packages though, and this figurine looks amazing.

Mickey’s garb is identical to the 1940 film. Including his red coat, which is tied together by a piece of rope, and sits over his brown, loose-shoes. The Sorcerer’s Hat sits on his head and is decorated with the star and moon images as they appear in the movie. Mickey Himself also has that signature grin underneath his stern and powerful gaze. On top of that, Mickey just sounds great – hearing that signature voice in the game is sure to warm the hearts of anybody playing. 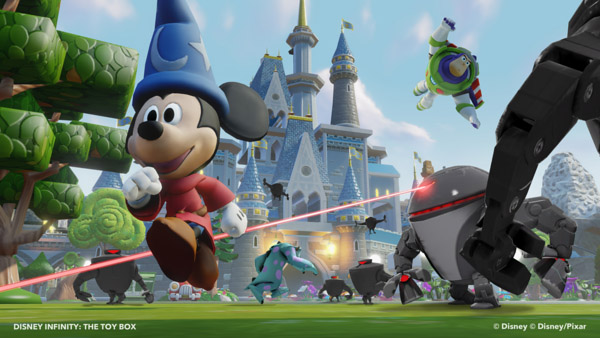 While Mickey has been slightly redesigned to fit in with the Disney Infinity aesthetic, the figure designers were careful to put him in such a pose so as to hide a lot of these changes. The changes, despite how minor they are, become a fair bit more apparent when you are actually in-game. Mickey is quite thin here, which makes his already comical head stand out. This is by no means a downside however, as it does make him fit in perfectly with the rest of the cast.

One of the key chapters in the Sorcerer’s Apprentice story is where Mickey has a dream that he can control the very stars themselves. As he stands upon a mountain top, he waves his hands around and conducts the stars like his own personal orchestra. Well, that star-conducting is also how Mr. Mouse plays. 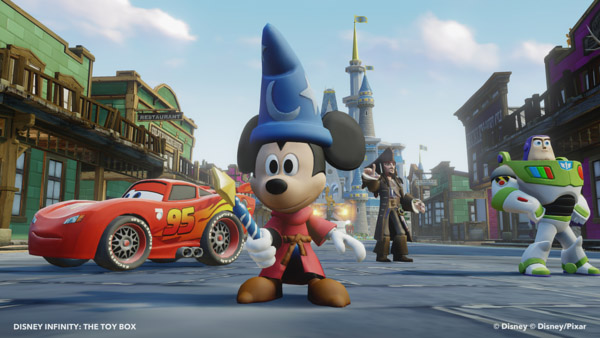 Mickey has three different attacks at his disposal. The first is his standard attack, which fires off a blast of energy towards his opponents, dealing considerable amounts of damage to anybody unfortunate enough to be caught in its path. The attack itself looks like he has summoned the stars like in Fantasia, and mixed them with the classic Disney fireworks display.

His secondary, ranged attack is very similar. He again shoots off a blast of star-like energy, but you can control where it flies. The attack itself is visually similar, but instead of one straight blast, the stars themselves rotate and create a small vortex-like effect. One by one the stars flicker out, but the attack itself can travel a considerable distance. 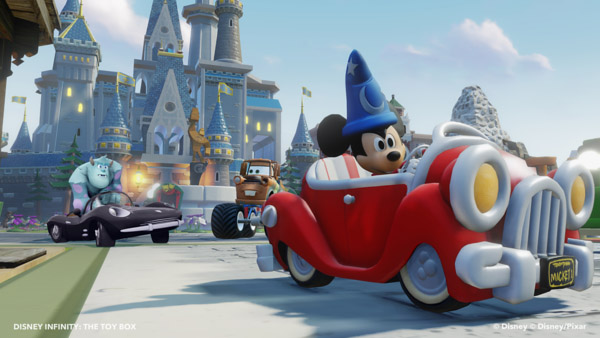 So he can conduct the stars like in Fantasia, but everybody knows the core of that movie was where he brings the brooms to life in order to make his life easier (which leads into the whole metaphor about hard work vs taking the easy way out). Well, Disney have not let us down, and Mickey can summon those very brooms. By jumping into the air and pressing the attack button, a bunch of dark, thunderous clouds surround our happy-go-lucky mouse, and underneath him, a ring of brooms, each carrying buckets of water appear. This serves as an area of effect attack, and hits from all sides.

You have likely seen Mickey walking, running and jumping around during the beginning sections of Disney Infinity, but here is a closer look at how he actually plays:

Mickey is made to be special, and unique from the other characters and this is pulled off to perfection. His attacks are unique, and even though they share some similarities with Elsa’s, the look and feel is so characteristically Disney and Fantasia that comparing the two is almost impossible. It is also important to note that unlike other characters, who’s secondary attack can usually by grabbed from their respective Character-Chest and used by everybody, Mickey’s magic is all his own. 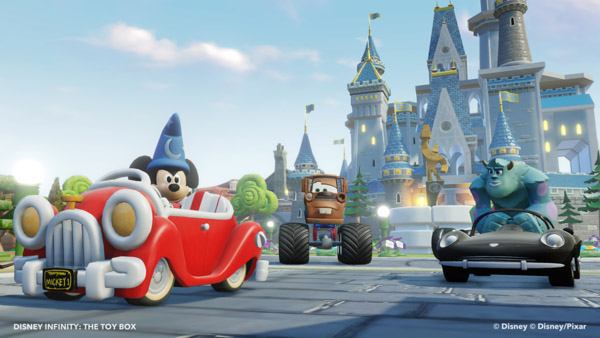 From his iconic look through to the unique abilities he pertains, Mickey Mouse has proven once again why he is the star of the show. Mickey Mouse has come a long way from his humble beginnings in Steamboat Willie, to the king of Disney Castle in Kingdom Hearts and now finally has become the king of your Toy Box in Disney Infinity.