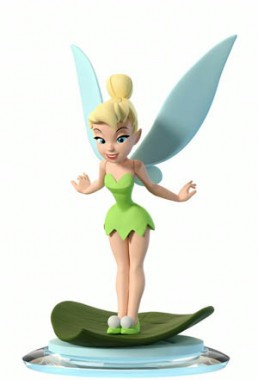 Tinker Bell, Tinkerbell, TinkerBell… However you say it (seriously, I’m not even 100% sure how it is meant to be written… I’ve seen it all three ways), Disney’s first fairy lady has arrived in Disney Infinity 2.0 with a hand full of pixie dust and is ready to stir up trouble. Tink is so far my favourite character out of the entire Disney Infinity 2.0 line-up and may even be my favourite character out of the entire franchise so far. 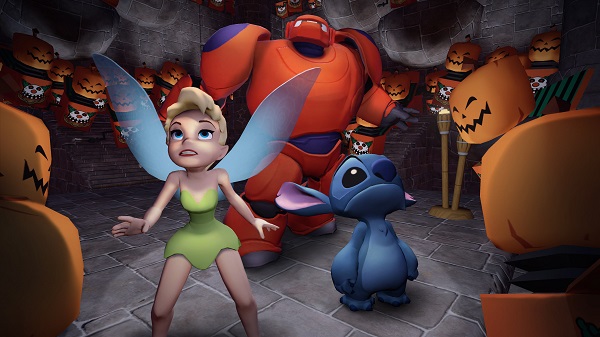 The Tinker Bell figure seems to be a cross between her Peter Pan iteration the the more recent Tinker Bell film series version (with a stronger emphasis on the latter). She is mischievous, cute and quite the powerhouse once you learn how to control her. As you would suspect, ole’ Tink can fly and the effect that surrounds her when she does is really quite pretty. You guessed it, magic pixie dust surrounds her as she takes to the skies and ducks/weaves around buildings and just about anything else you have planted in your Toy Box. Nova’s blue glow used to be my favourite in-flight animation in Disney Infinity 2.0, but the Pixie Dusts bumps old bucket head back into second place now.

Instead of being a traditional melee-based fighter, Tinkerbell uses her magic wand to throw blasts of energy from afar. Now, I haven’t seen any of the TinkerBell films so I don’t know if the magic wand is something that she has in those movies or if it was invented just for the game but I think it is pretty kick ass. However, Tink’s strength isn’t in her attack skills, but rather in being a healer and team-player. Pretty much all of the fairy’s skills relate to healing and shielding her teammates in some way, making her a likely candidate for a medic should you ever need one. 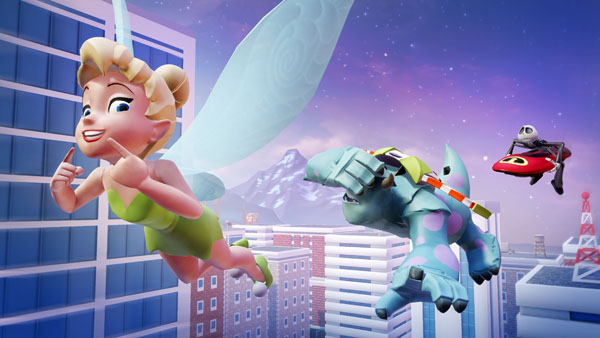 Not only is Tink’s flight animation unique, but so is the way she walks. Her walk is more of a… skip, she skips merrily from place to place. Even after you upgrade her running speed, she is still just skipping slightly faster. This alone makes the green fairy sparkle amongst the gang.

Physically, I would say that the Tinker Bell figure more closely resembles her original incarnation than anything more recent. However, this could be largely due to the fact that she has undergone the Disney Infinity make-over treatment to help her fit in with the rest of the gang. If it was possible, her features are even more cartoony, and she fits in more nicely with some of original Disney Infinity figures than any from 2.0. 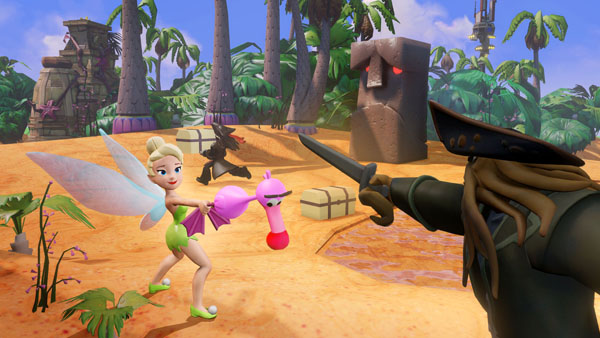 Now as I’m sure you’re all aware, if you go to any halloween or costume party anywhere in the world, someone will inevitably show up as a slutty Tinkerbell. Now, Disney being the family-friendly company that they are do wise to not let their Infinity figure fall into the realm of indecent, however the dress she is wearing is a tad revealing, even going so far as to paint on a pair of green underwear for her. I don’t find the figure to be indecent or in poor taste, but I know that some people out there might not like the shortness of her skirt, so it is just a heads up for you guys out there.

So there we have it, I never would have guessed that Tinker Bell would quickly become my favourite character in a game that includes Buzz Lightyear and Spider-Man. I guess it just goes to show you how transcendent Disney properties are… or something like that, who knows – maybe I have just had pixie dust sprinkling over me and I am thinking positive thoughts so that I can learn to fly.