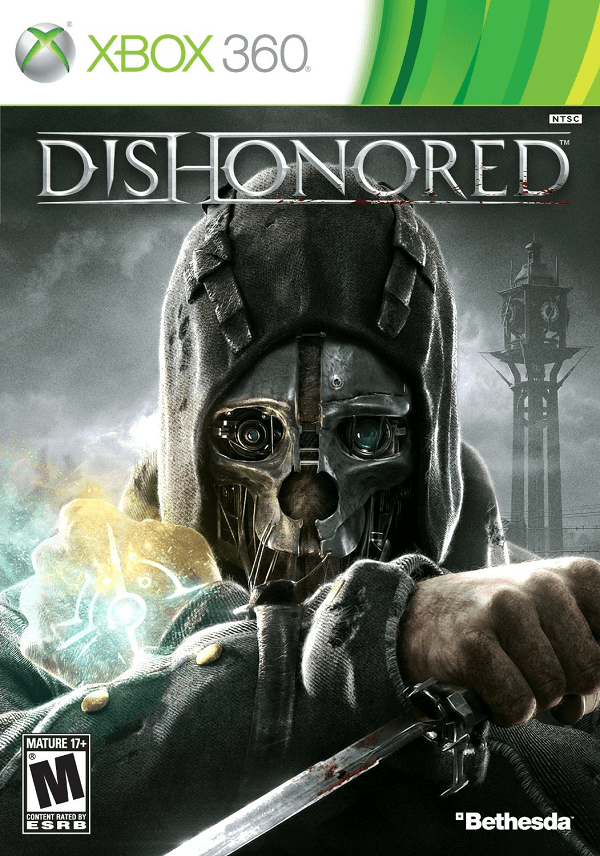 Overview:
The freedom of choice is something that many games try and portray when they are advertising themselves to the world, but usually these choices are limited to very specific actions which will vary little from what everyone else playing the game experienced. However Bethesda and Arkane Studios have brought us a game that may offer true player choice in the form of Dishonored. Should gamers choose to play Dishonored or should they decide otherwise? Let’s find out.

Story:
The industrious city of Dunwall may have once been the most powerful nation in the empire thanks to its technological boom and whaling industry. However those prosperous days are in the past as a terrible plague called the “Rat Plague” has swept upon the city like the Black Death, dooming the poor to be isolated and left to die as their loved ones fall to the plague. 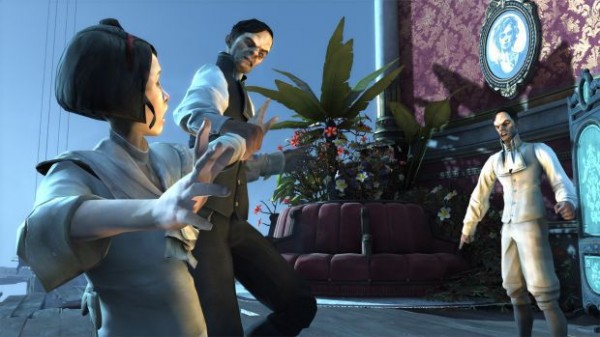 The Empress ruling Dunwall is not blind to the nation’s plight however and has sent her trusted bodyguard Corvo Attano to seek help from other nations in battling the plague.  Corvo is a man close to the Empress’ heart and a devoted protector to both her and her daughter Emily.  Players step into the boots of Corvo upon his return with bad news for the Empress. Unfortunately his early return has placed him right in the middle of an assassination plot he has no chance of preventing.

Instead Corvo is made to watch as his Empress is murdered in front of him while Emily is whisked away by the same assassins. Being the only one left at the scene, Corvo is quickly blamed for the murder of the Empress and sent to jail. After escaping jail through the help of a group of rebels, Corvo is visited by a strange being known as “The Outsider” who grants him supernatural powers, eager to see what the man will do with his abilities. Now that Corvo has the means to track down Emily and put an end to those who planned the Empress’ assassination, how will he handle the situation? It is up to you to decide. 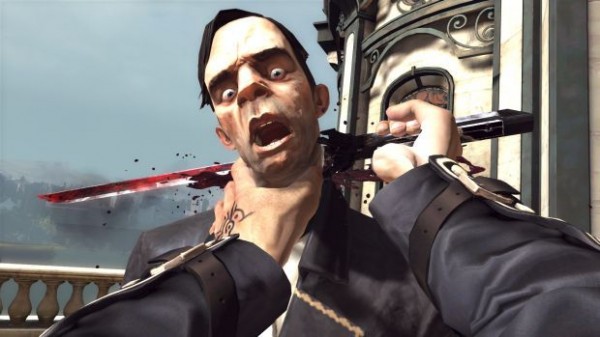 While Dishonored may be a classic story of revenge where the player must systematically hunt down every member of the plot to find out their true attentions, the story is also told amazingly well. The dismal city of Dunwall provides a perfect setting for this classic tale of revenge. It also helps that player choice works its way into the storyline as well, providing a number of different options for the player to take as they play through the story.

While nearly every mission you are sent on involves assassinating one or two targets, there are other routes that can be taken and even a few additional side-quests to interact with at the same time. There are numerous ways to complete a mission, some of which don’t involve even a single drop of blood being spilled, though perhaps some of your targets may have wished for death after they discover their fate. 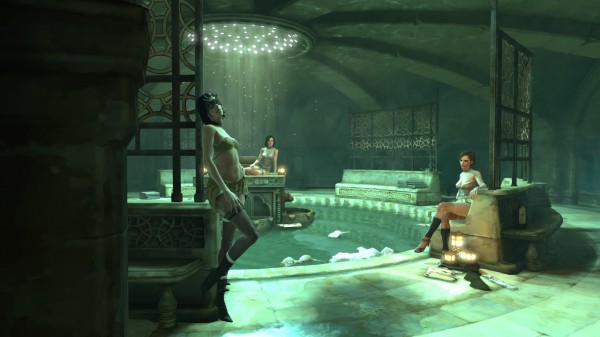 In the end, Dishonored tells a vivid story of Corvo’s revenge against political usurpers and it accomplishes it by not only sticking true to a number of standard plot-devices but providing a powerful setting, characters the player will come to feel close with and clear villains that only become darker as the player investigates the world around them.

Visuals:
Dishonored features a rather artistic visual design, though this design does appear dated in a number of areas. The title features large amounts of texture pop and blurry objects. Thankfully this isn’t too much of an issue however considering how stylistic the game is with its steampunk designs and its Victorian England appearance. 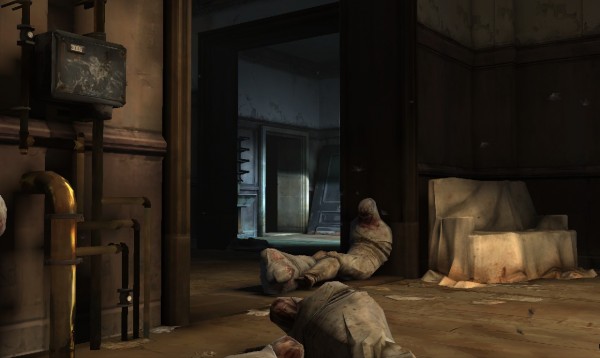 Audio:
One thing that helps contribute to the fact that Dunwall feels so atmospheric is the fact that the audio work is amazingly well handled. Guards talk nonchalantly as they continue on their routes, survivors cry in hidden areas, rats scurry through alley ways, eating anything they come across and more, all set to some rather eerie background music. 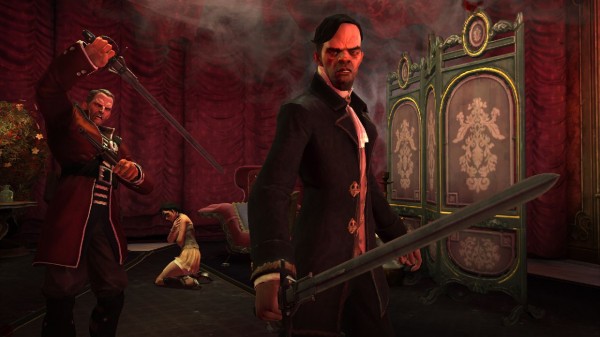 Gameplay:
Players will see the world of Dishonored through the eyes of Corvo as he sets off on each of his missions, however exactly how you choose to take on these missions is entirely up to you. You can either choose to be a murderous whirlwind of magic, bullets and swordsmanship, a stealthy assassin killing only those blocking your way to the target, or even a man of mercy.

Dishonored doesn’t stop there however, as they have also provided a wide-ranging arsenal of weaponry and magical abilities to use at will. Corvo will be able to use a number of special abilities such as short-range teleportation, wind-blasts, possessing animals or even people and even summoning an army of rats to sick on your enemies. Outside of these special abilities granted to you by the Outsider, the player also has a number of more mundane weapons at their disposal such as a multi-purpose crossbow, pistol, explosives, traps, and of course his deadly assassin’s blade. 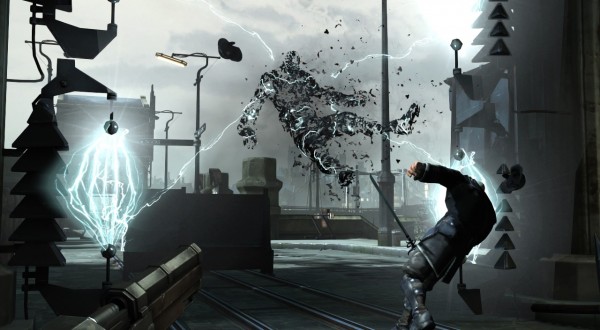 Each piece of your equipment is upgradeable through the rebel’s scientist, Piero, who will provide various upgrades to your gear and weapons for a price while magic is upgraded by collecting runes. These runes are very easy to find however thanks to a special heart that points to the exact location of each Rune and Bone Charm that is in an area. However it only shows where these objects are, not how to get into the area, creating some rather tricky moments of exploration. The aforementioned bone charms provide various bonuses to Corvo’s skills and a limited number can be equipped at any given time.

For every mission that Corvo ventures out on, there are a number of ways to go about practically everything in each mission. There are always multiple ways to enter an area and sneak past guards. If you feel like possessing a fish and entering a building through a storm drain that is just as legitimate as sneaking through an open window on the building’s top floor or breaking down the front door with a blast of wind and death. While some routes are obvious to take, such as climbable air ducts, if you choose to sit ten people down and have each one play through the same mission, you will likely find at least five different routes taken by these individuals. 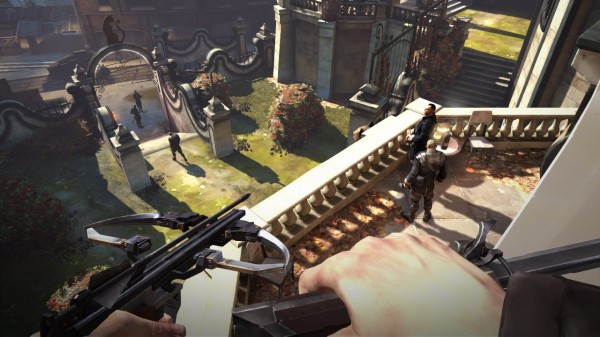 Choice doesn’t end in exploration either, they also have a number of ways they can approach combat, or lack thereof. Stealthy players can choose to sneak around enemies and sleep-darting or choking out anyone who may be in their way while those looking for bloodshed can plant a wire-trap on a rat, possess the rat and run it into a group of guards and create a mess of blood and flying limbs.

Those who choose to enter full frontal combat will find themselves at a bit of a disadvantage however, thanks to the fact that enemies are quite intelligent despite Corvo’s supernatural skills. Players can use two weapons at any given time, their sword and a pistol, bow, bomb or spell though it is worth noting that those entering into sword combat will find the enemy AI quite adept at swordplay. They will block and dodge your attacks gracefully, making parrying and counter attacks essential to winning a sword fight.

It is actually amazing that Arkane Studios managed to find such a balance between offensive and stealthy capabilities for Dishonored. Not only is the combat tight and visceral, the stealth system is refined and requires thought as players can be discovered by searching guards easily if they choose to simply hide in the shadows rather than teleport out of the area or possess a guard or rat and sneak out of the area. 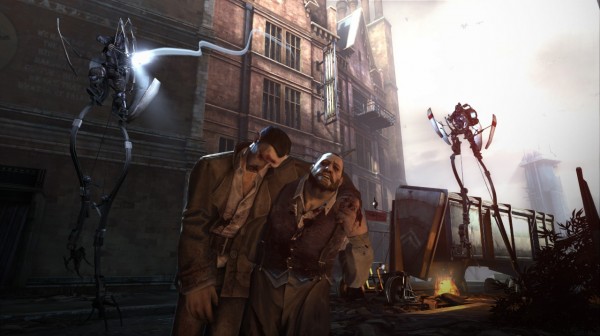 That being said, while players can choose to take whichever route they feel like, Dishonored feels like it lends itself to be played stealthily and with a nonlethal approach. There are always ways to take down your assassination targets non-lethally and it simply feels much more satisfying to play as a stealth game, though it is also just as fun to slaughter everything in sight.

The game does feature an interesting system called the “Chaos” system which changes a number of things in the game depending on your actions. Becoming a merciless murderer can lead to a more difficult game later on, as the plague becomes more of an issue thanks to the increase in dead bodies and NPCs may look down on Corvo’s blood splattered path. High levels of Chaos can be reduced by playing missions stealthily and players can still kill a number of people per mission without worrying about the Chaos level rising above low. 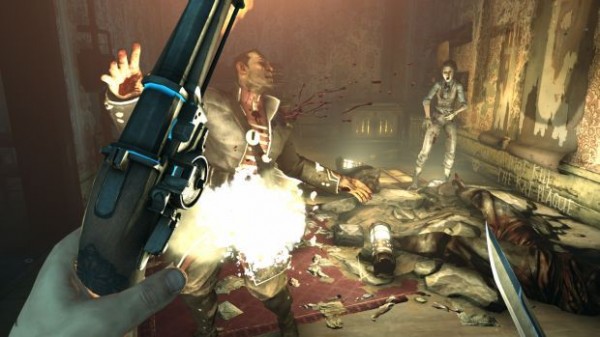 The various choices and options that Dishonored provides players helps provide an amazing level of re-playability which does help as the game can be blown through in around seven hours if you choose to simply ignore all elements of stealth and side-quests. However those playing the stealth route can find upwards of fifteen hours of game time here and still find more ways to go about a mission in their next playthrough.

Overall:
Dishonored does something rare in this video game industry. It sets itself above the standard game by not only bringing excellent stealth and combat mechanics combined with an enjoyable storyline set in a dilapidated city riddled with plague and corruption, but also doing it in such a way that the player will always feel like they are in control of what they are going to be doing next. Gamers can choose how to tackle any situation in Dishonored and feel gratification in doing so. There are simply no other games on the market that do what Dishonored does, making it a game many will be talking about in the years to come.