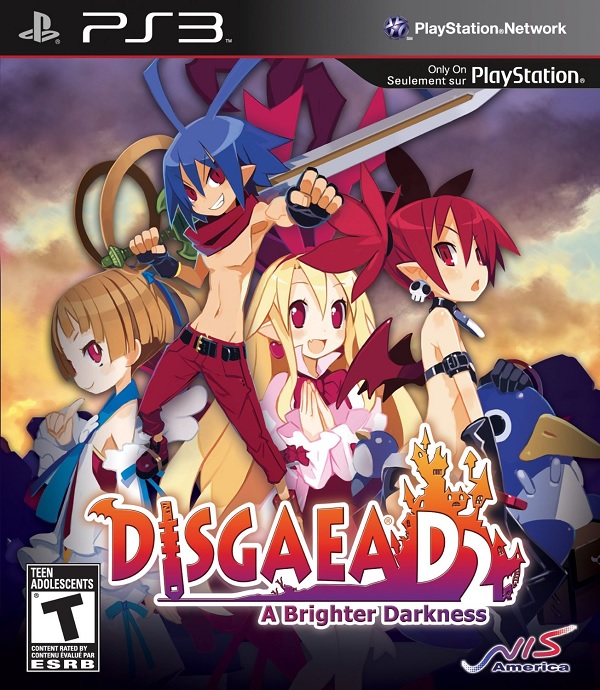 Overview
Ever since the first Disgaea game was released on the PlayStation 2 back in 2003 the game helped expand upon what, at the time, was a thriving strategy RPG genre. Over the past decade strategy RPGs have become rather uncommon but Nippon Ichi Software has always stayed true to form and over the years the Disgaea series has received not only a number of numbered titles but even a few spin-offs here and there.

Despite these games being numbered however, none of them directly followed a previously told story and while Laharl, Etna and Flonne have appeared in almost every game since, they have yet to star as the protagonists once again. That is until the company’s first sequel Disgaea D2: A Brighter Darkness was created and released in the West. Does the return of these signature characters make for an unbelievable game?

Story
Disgaea D2: A Brighter Darkness takes place a number of years after the events of the first game with Laharl taking over for his father as the Overlord of the Netherworld. However thanks to his nature, there are many demons in the Netherworld who simply don’t care about him, don’t even know they have a leader or are actively planning on trying to dethrone him and replace him. 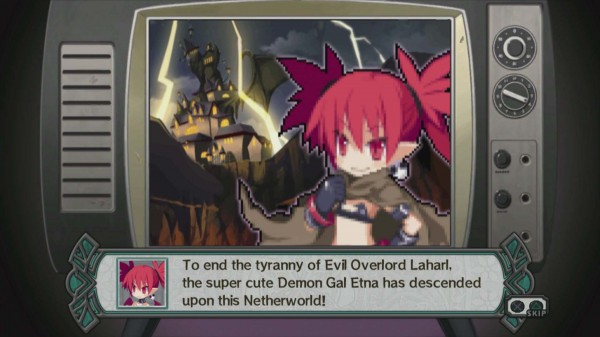 One such organization called the Krichevskoy Faction has been gaining quite a following and as such Laharl must finally start paying attention to what is happening around him. Unfortunately for him, things are more complicated as it seems as a new threat to the Netherworld begins to appear and change the world around him and to make matters worse, an angel named Sicily has appeared claiming to be his little sister. With everything happening at once only the classic crew of Laharl, Etna and Flonne can take and set everything right, or at least back to how they like it.

Now while the first Disgaea, Disgaea: Hour of Darkness, had a fair bit of drama and emotional moments here and there, this isn’t that game. This is probably for the best in all cases however thanks to the fact that Disgaea D2 plays as an almost direct sequel and gamers have already grown rather fond of the cast of characters and what better way to put together a game with these favorites than put them in a mostly comedic storyline with so many fourth wall breaking references, comedic violence and random twists and events that players will constantly be guessing as to what will happen next. 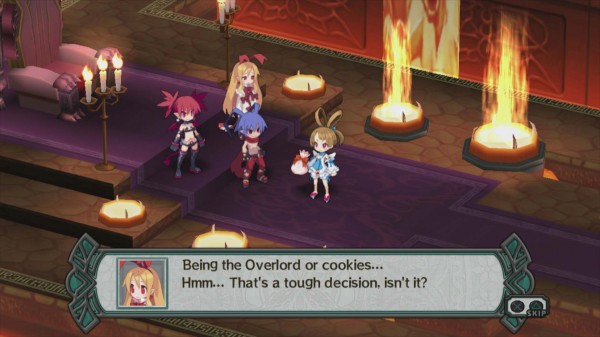 Sure there is something to be said for the lack of major drama in Disgaea D2 but despite that the game manages to offer a great and often humorous time where players will see everything from Laharl turning into a busty girl and Etna suddenly changing colors to battles that put the fate of the Netherworld in these strange characters’ hands. This makes the game highly enjoyable but it is worth noting that, while not entirely necessary, players will be able to get the biggest kick out of the game’s story if they have played the first game or at least know about the various events from Hour of Darkness before jumping into this one.

Gameplay
Those familiar with what Disgaea has to offer will already know what they are getting into here, but for everyone else Disgaea D2 is a strategy RPG where combat takes place in a grid-based arena. While combat is a turn-based affair it is not your standard system where speed plays a factor in turn order. Instead each side takes a turn at one time, allowing the player to move or attack with all of their fighters while the enemy will also retaliate in the same manner. This makes placement and planning of battles a necessity as it is very easy to be wiped out thanks to poorly placed characters being swarmed by enemies. 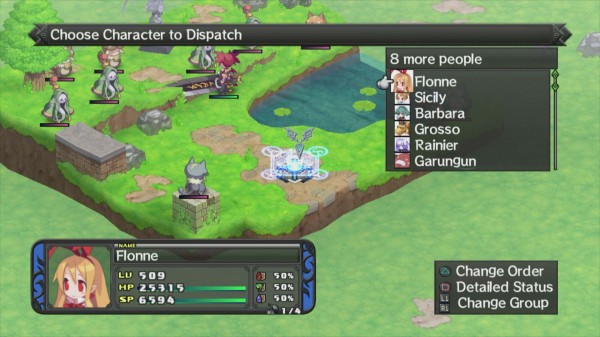 Like more recent games in the series it is possible to have characters partner up with one another for team attacks if they are close together or use Geo Panels to take advantage of buffs or de-buffs and dish out extra damage and while actions can be taken one at a time, it is possible to plan an entire turn out and watch it occur in one session. Like I mentioned earlier, it is worth noting that the game does have a pretty significant difficulty level but compared to more recent titles, it feels a bit easier this time around as everything is explained early on and players are given free reign of how to fight from then on.

Disgaea D2’s battles usually always see the main cast of characters in the party but the player has the option to flesh out and expand their fighters by bringing in custom fighters of different classes and skills, giving players a chance to set their party up to fit their play style or change things around if a battle turns out to be giving them a rough time. 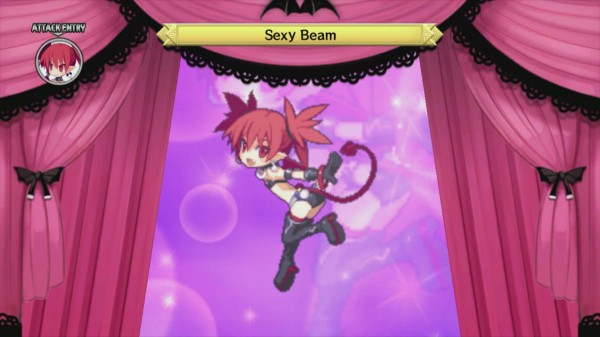 Put all of that together with the fact that players have the ability to use monsters as mounts in this game, though the system is a bit useful as it allows the character riding the monster to take less damage it ends up giving the player less to work with on the field. There is also the item world to explore which gives players a chance to dive into an item and venture through numerous levels of battles as they upgrade the item by going as far into it as possible.

It is interesting to note that the Dark Assembly has also returned and there are a number of new options available inside of it, including a “cheat shop” which allows players to change various elements of the game such as raising experience rates by sacrificing money drops among other things. This gives players an deep level of customization and the ability to reach even the coveted level 9999 faster and more fun than before.

Visuals
In many ways Disgaea D2 has received the same visual upgrades that were part of Disgaea 4, including the way a number of enemy characters look. Following that trend the in-game sprites are rather impressive looking despite many of them being with the series for years at this point. The newly introduced enemies and characters look great in the game and the in-game combat is as stylish as ever with numerous over-the-top moves at the player’s disposal. 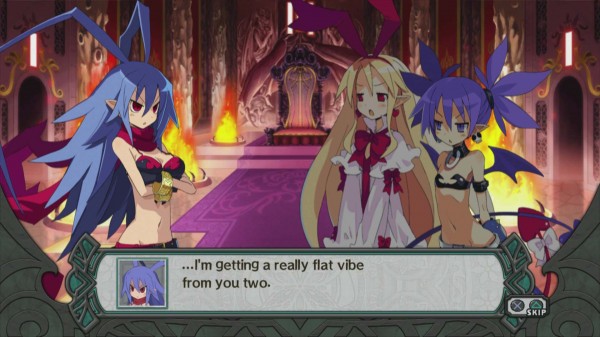 That being said, the battlefields the player will fight on loo rather poorly designed with numerous out-dated looking textures but this problem is alleviated by the variety of areas players will visit and just how colorful the world is. As for the in-game dialogue sequences, the character portraits are nicely detailed and as impressive as ever and work well with this style of game.

Audio
Fans of the original three will be happy to hear that the English voices of Laharl and Flonne have been retained for Disgaea D2. It is worth noting that although Etna’s voice actress isn’t quite the same, it is the voice actress that has handled the character since the original game and she does a wondrous job voicing the character. As for the rest of the cast and voice work, the game has a nicely done English dub which works well with the tone of the story. 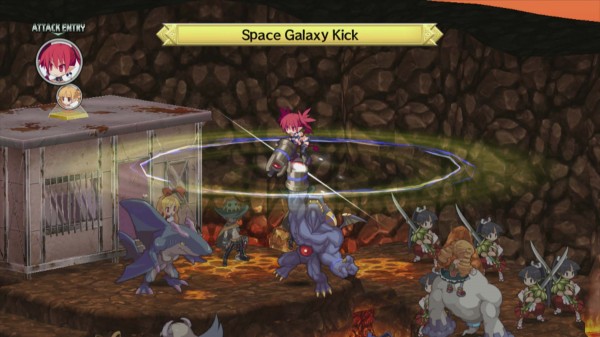 As for the game’s soundtrack, Disgaea D2 sports a varied set of background music that works well more often than not. While some pieces of music can be a bit grating after a while, especially during a long battle, it is an impressive offering that works well both when walking around the hub or fighting it out.

Overall
Disgaea D2: A Brighter Darkness adds a few new features to what has already become one of the most refined strategy RPG in the industry. The game’s story brings back three favorite characters from the first game and provides an entertaining storyline. Of course it does require knowledge from the first game in the series to truly enjoy as there are a number of leaps that will be missed by those unfamiliar with the original Disgaea. That being said, Disgaea D2 offers a slightly more accessible but still incredibly deep and complicated experience.