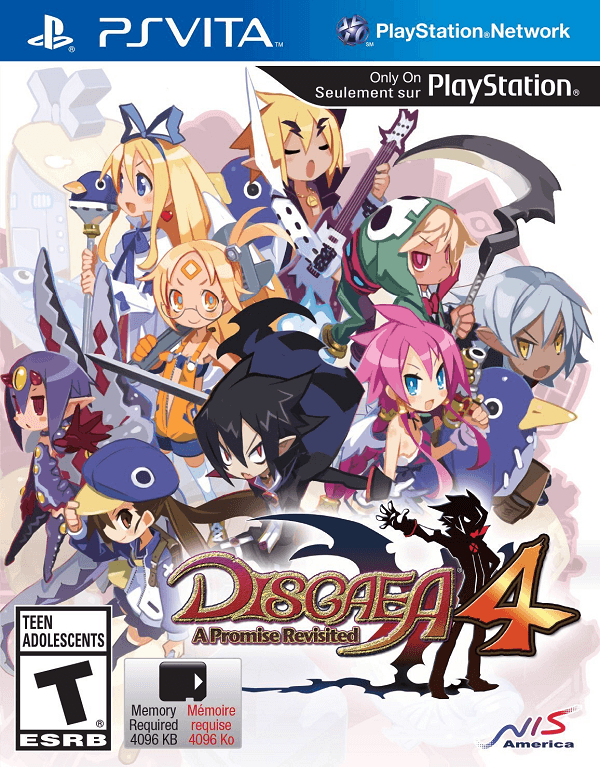 Overview
Nowadays there are many games that suffer from a lack of content or just barely scrape by with the bare minimum. However there are also video games that over deliver on content and the Disgaea series has long been known as one of these. As such with Disgaea 4: A Promise Revisited offering not only all of the DLC released for the original version but also exclusive content, is this a must have for the Vita?

Story
The Netherworld is usually seen as a terrifying place and while vampires are also known for being horrific creatures of the night, the one that headlines the story of Disgaea 4 is far different creature. You see, Valvatorez, the vampire in question, is far more content to snack on sardines and never touch a drop of human blood as he holds onto a promise made long ago. 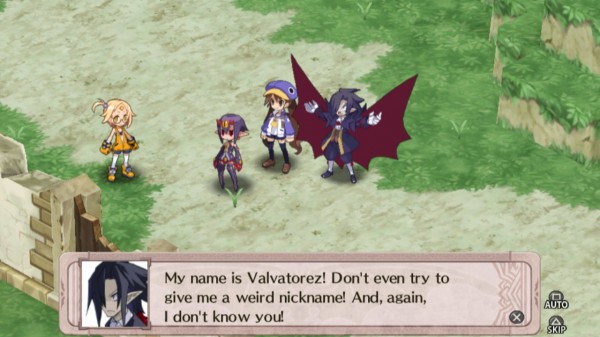 While he was once one of the most powerful tyrants of the Netherworld, he has since become a Prinny instructor that is content with his lot in life, much to the dismay of his servant Fenrich. However on the day that his current batch of Prinnies are set to graduate, all of them are abducted in front of him, driving Valvatorez and Fenrich to embark on a journey that sees them not only face off against the “Corrupterment” which has started to let the Netherworld fall into disarray, but forces that are out of this world.

While there are plenty of grim details spread throughout the storyline that help drive the story forward, such as Valvatorez’s past and numerous other details that I won’t elaborate on because of spoilers, the story is still incredibly silly and chock-full of humor. The main characters of the story are an eclectic bunch and memorable bunch ranging from the aforementioned sardine loving vampire to final bosses in training and a girl who couldn’t become a Prinny because they ran out of material. 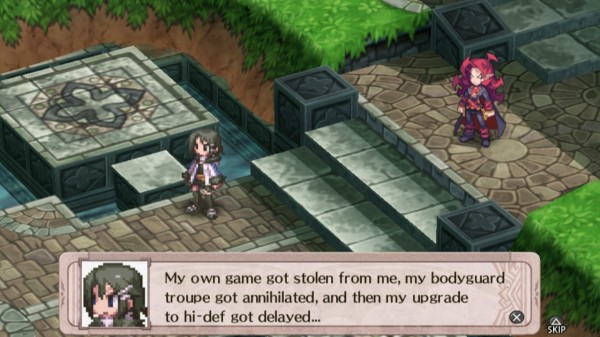 The interactions these characters have with one another as well as with their enemies lace the game with plenty of humor, making players crack a smile even if it is one of the darker situations happening at the time. With this version of the game it is even better because of the extra storylines involving Desco and Fuuka as well as the new character Nagi Clockwork being implemented into the game and giving players even more to enjoy from the already extensive story found in Disgaea 4.

Gameplay
Those familiar with Disgaea should already know what to expect in this regard and I’ve written extensively about the gameplay offered in the title back when the original was released. For the more in-depth details you can read it here. To keep things somewhat brief however, this title is a strategy RPG meaning that players will battle on a grid-based map where they will take turns with their enemies moving around and attacking on the field. 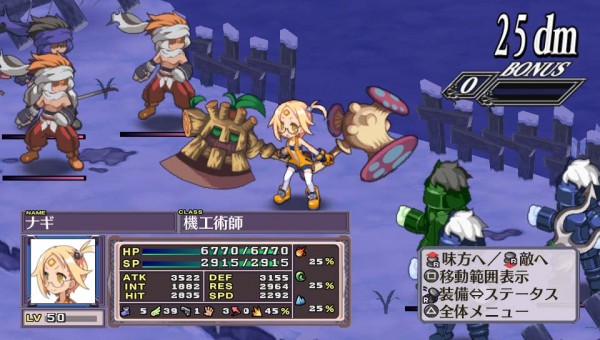 Players have the ability to perform standard attacks, special attacks, chain attacks, make use of skills and spells (a new level of which has been included in this release), pick up and throw allies as well as enemies, even capture enemies by throwing them into your base, and more and they can even make use of monster type allies to “magi-change” them into weaponry with unique skills in combat or combine two monster types into a fusion which creates a large version of said monster with increased stats and range.

To top that off there are also “Geo-Blocks” and panels that all provide special bonuses or drains on the characters standing on them, both allies and enemies. This means that players can exploit these bonuses to their benefit but also have to avoid being taken out by enemies utilizing the same technique, or by throwing the blocks to cause chain reactions that not only damage characters on panels, but can alter their bonuses and drains. 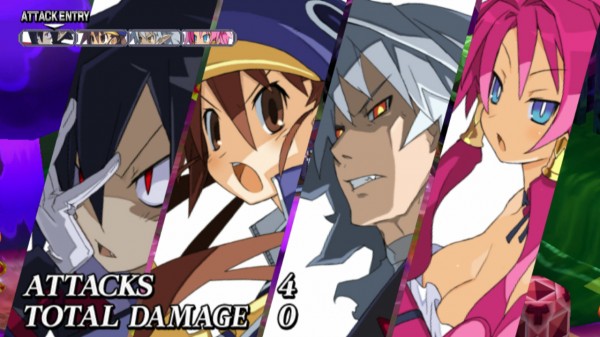 To say that there are a lot of different mechanics at play in Disgaea 4: A Promise Revisited’s combat system would be an understatement. Despite the amount of mechanics that players will need to wrap their heads around, the game does a very good job introducing many of the mechanics while also encouraging the player to play as they wish. This can lead to players spending countless hours training up their characters, gathering equipment, grinding for new evilities, and much more.

Grinding away is a recommendation in Disgaea 4 since not only can players gather various rewards from revisiting old stages as well as exploring the Item World (more on that later) but also due to the way that the game throws a few difficulty spikes your way. This makes it almost a requirement that players save often because your next battle might just one you are ill-prepared for. 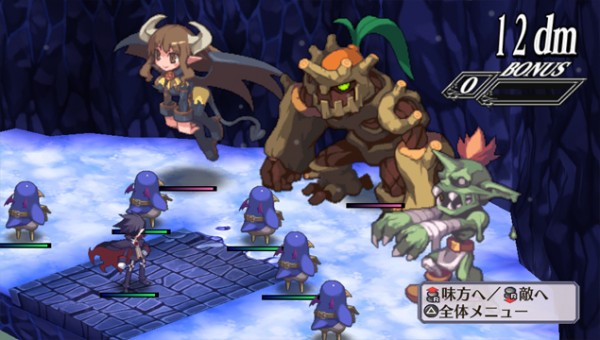 Of course the way that Disgaea handles grinding and how fun and outrageous most of the attacks and concepts in battle are, grinding never feels like a truly bad thing. The aforementioned item world has been given a few extra modifications and it still involves the player making their way through the world within any item and powering it up through combat.

Outside of the new characters that have been added to the game, a couple of which will be familiar to those who have a copy of Disgaea 3 on their Vita, a weapon editor has been implemented to allow for minor customization which is a nice touch. There is even a “Cheat Shop” that allows the player to modify a bit of the game’s EXP, Mana, and Money drop rates to fit their play style since raising one requires another to be lowered.

Visuals & Audio
When Disgaea 4: A Promise Unforgotten was originally released it was the first game in the Disgaea series to make use of HD sprites and now that the title has been re-released onto the Vita, these HD sprites look crisper than ever thanks to the Vita’s OLED screen and the same can be said for the character portraits during dialogue sequences. 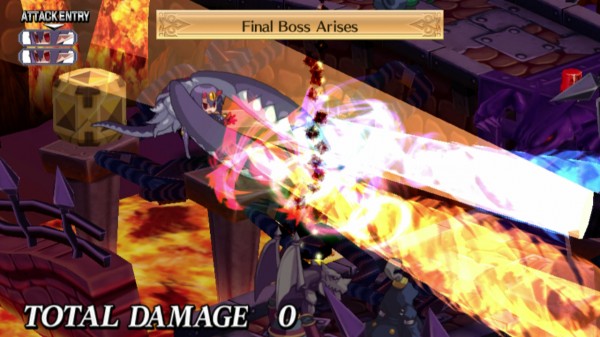 Also the amount of action that can happen when some of the more elaborate looking skills are unleashed is impressively presented on the Vita. A special note goes to the fact that despite being brought down to a smaller screen size, the amount of menus that players will have to navigate and make use of in combat remain clearly legible and do nothing to clutter the screen.

As with the original release, Disgaea 4: A Promise Revisited has been released with both the English and Japanese voice track and just like the original, the English voice work is very impressive and actually is the best considering how humorous the writing is in the game. The background music is a real treat for the ears as it has an excellent set of battle themes to go along with the numerous, and usually lengthy, fights players will take part in.

Overall
If something is working well, you capitalize on that fact and that is exactly what Disgaea 4: A Promise Revisited does. The original title offered countless hours of gameplay and storyline and this release expands upon that. Add to the fact that the way the battles are handled is perfect for the portable nature of the Vita and you have a must have title. If you haven’t experienced what Disgaea 4 had to offer this is your best chance, while those who already have will find that there is enough new content to dive back into another quest to reach level 9999. 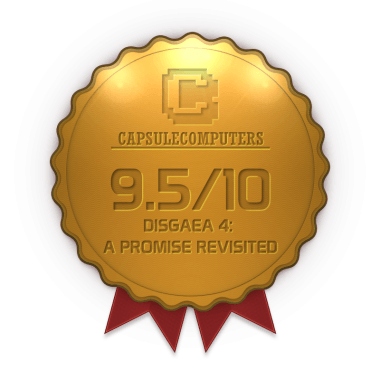