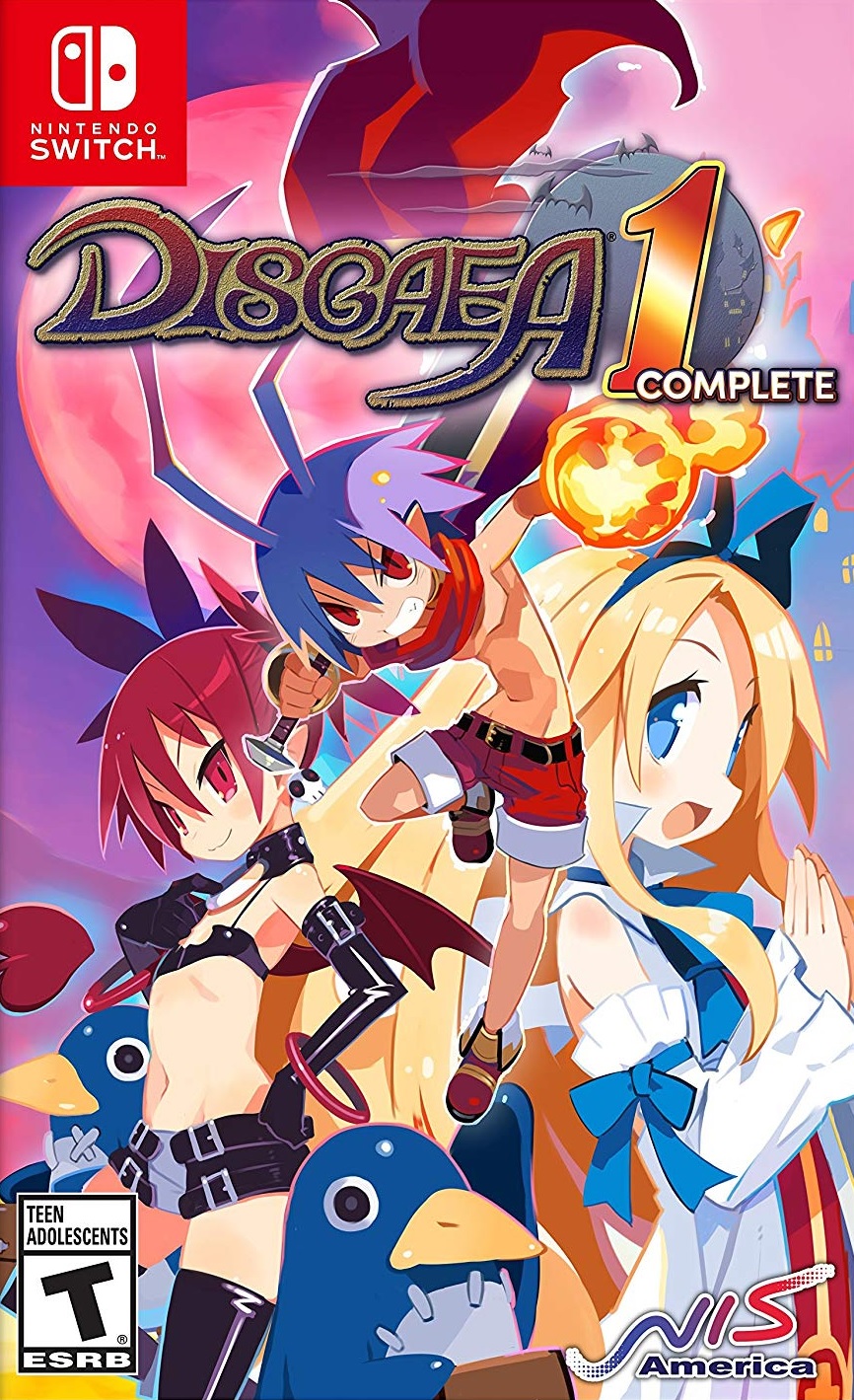 Whether you’ve played Disgaea: Hour of Darkness, its eventual direct sequel, numerous follow up games, and various spin-offs you’ve likely seen Etna or a Prinny in some form over the years. That is just how prolific the Disgaea franchise has been since it originally was released in 2002 and although many fans of the SPRG franchise have likely played the later games in the series, there are many who have likely never revisited the game that started it all despite it being re-released on various platforms up to a decade ago. Thankfully with NIS America bringing Disgaea 1 Complete to current consoles it is the perfect time to rectify that if you can stand some of the more archaic elements of the game.

Those who have played the original game or its various re-releases through the years will see that Disgaea 1 Complete doesn’t really add anything new to the story mode other than the Etna Mode that has been offered in other versions but for those who have yet to play the game, the story follows the demon Laharl who has been slumbering for two years in the Netherworld. Over this time his father, King Krichevskoy, has passed away and the Netherworld has gone even crazier with no Overlord running things. As such, Laharl is awoken by Etna, a female demon with ulterior motives, who claims to be his vassal and informs him about the events that have transpired during his time asleep. 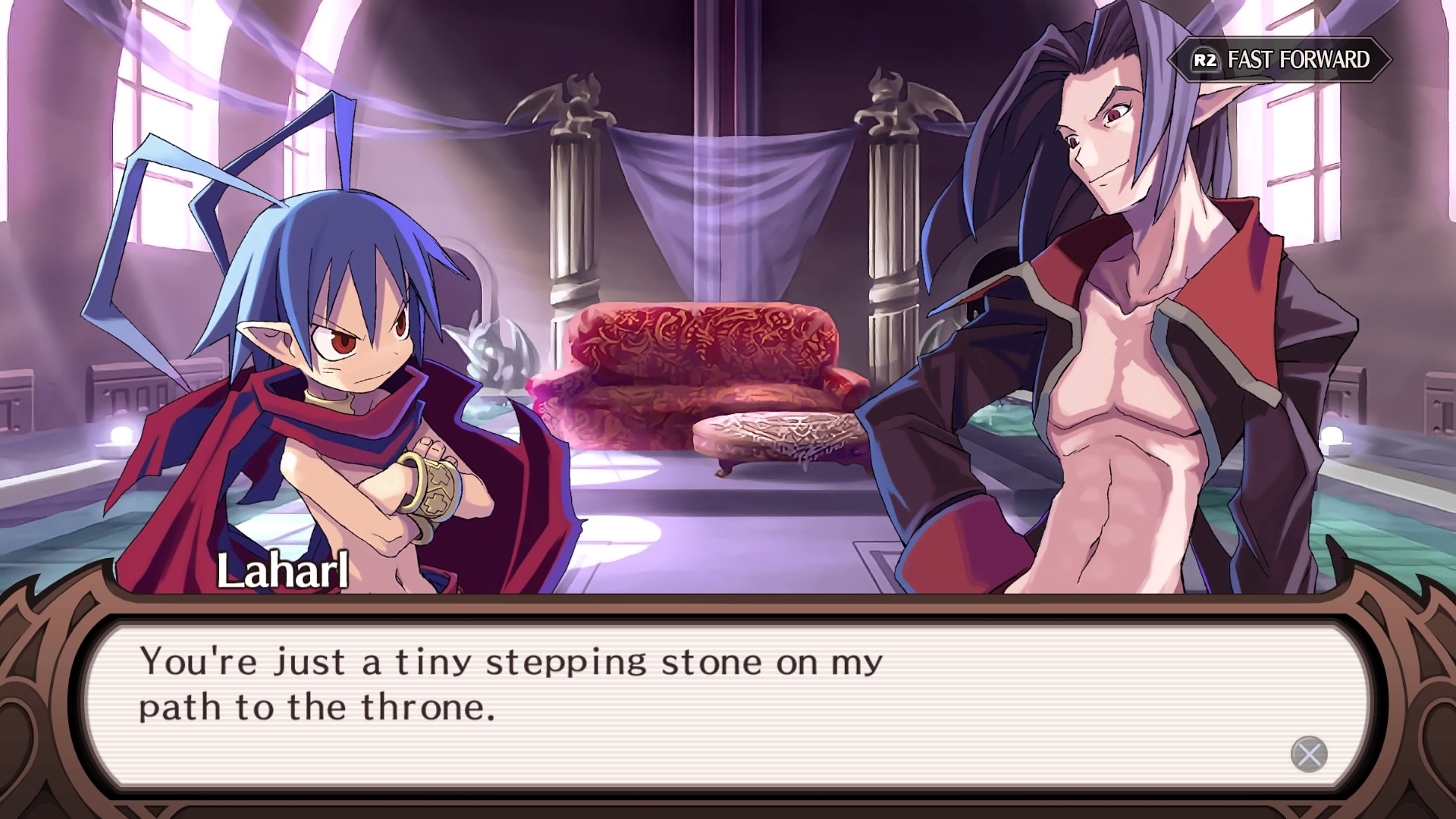 With Laharl awoken, the pair begin to venture forth in an attempt to reclaim Laharl’s throne, eventually meeting a young angel in training named Flonne who joins their group in an attempt to see if Laharl can learn to love others. Now anyone familiar with the series should know what to expect but for newcomers this may seem like a dark and bloody sounding tale and while it is true that there are plenty of darker and serious scenes scattered throughout Disgaea 1 Complete the actual storyline takes itself far less seriously.

Instead there is plenty of ridiculous humor and events that take place throughout the game as players encounter various strange enemies that end up becoming allies in various forms. The core cast of characters are incredibly charming and there is a reason why so many have remained mainstays throughout the series and beyond it as well. This ensures that no matter how long it may take you to complete this incredibly lengthy game you’ll find yourself enjoying the story, especially if you happen to enjoy random humor and strange events happening that completely set this series apart from your standard RPG story.

In many ways Disgaea 1 Complete still plays similar to even the most recent titles in the series as players can still eventually spend hours grinding away at the item world and being able to deal massive levels of damage as you make your way to the coveted 9,999 level. Players will find themselves using their base as the main hub of the game where they will be able to interact with other characters, purchase equipment, and even pass bills through the Dark Assembly to modify elements of the game such as increasing the quality of gear in shops and more. 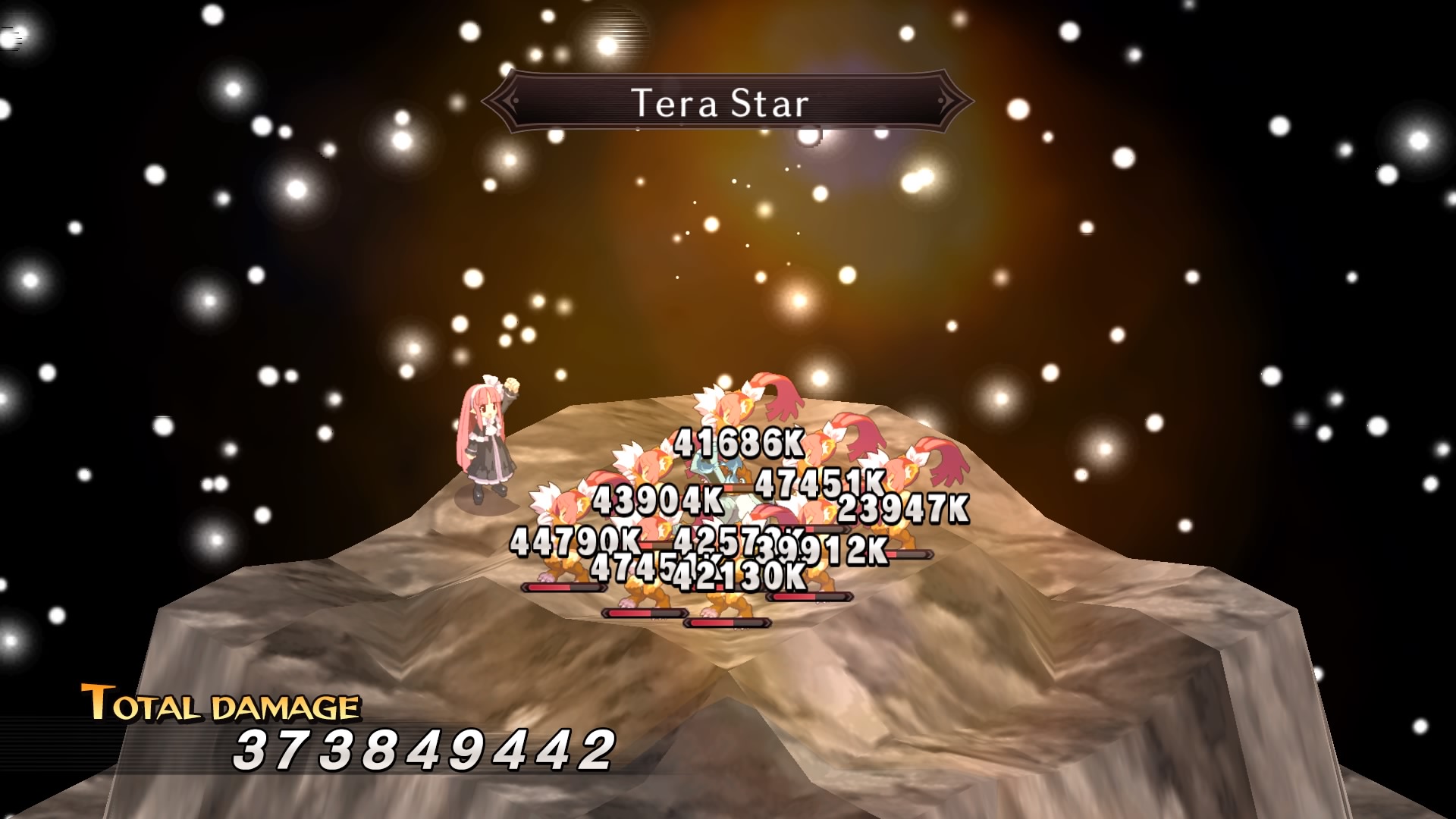 Battles still take place on a standard SRPG style isometric grid where players will be able to move their units around and deal damage to the opponent during their turn with each of the different characters having special skills that can be used during combat. Positioning your characters to take advantage of possible flashy combo attacks is always a blast especially with how odd some of these combinations can get. In fact, many of these character and monster classes can eventually learn other abilities through the Mentor system where some characters can learn abilities from their Pupils and make themselves quite powerful in the long run.

Of course players can still make use of the time honored Disgaea tradition of picking up and throwing enemies and allies alike as well as making use of the Geo Panels and Geo Blocks to apply various effects to the stage and the floor that units are standing on. These panels can offer various buffs as well as negative status ailments making managing them just as much of a vital feature to keep an eye on during difficult battles as defeating the enemies. 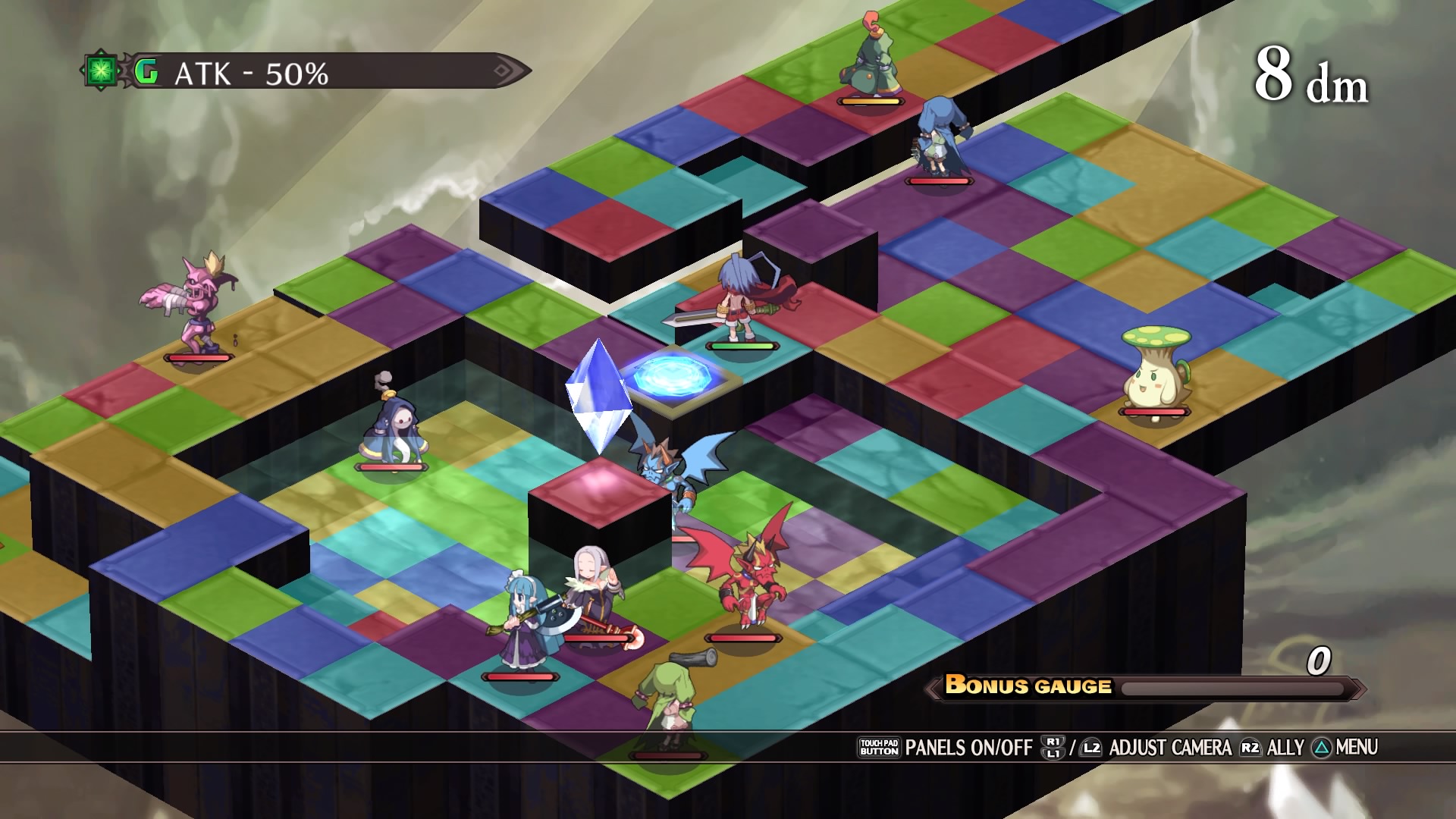 Taking advantage of these features as well as the ability to reach insane levels has always helped set this series apart and even in Disgaea 1 Complete these features remain the same, especially in post-game dungeons where the real grinding begins to take place as you try to unlock special units only available once the game has been completed or delve deep into the Item World to improve your gear. That being said, this grind can take a lot out of a player especially since Disgaea 1 Complete doesn’t feature any of the various improvements or new systems implemented in its sequels.

Combat features such as losing a turn after a foe has been defeated by another character return alongside other smaller elements that have been improved over the years, all elements of Magichange and Tower Attacks are removed, and even basic streamlining features that helped smooth out certain elements have not been implemented into this release. As such players should expect not too much more than improved visuals as they return to Disgaea 1 Complete, something that will please purists but may frustrate others who have grown familiar with the elements of more recent titles and newcomers.

While nearly every element of Disgaea 1 Complete remains the same as in the various re-releases through the years, the game does feature an incredibly impressive graphical upgrade. Laharl, Etna, Flonne, and all the rest have been given brand new HD sprites that look as great as the most recent entries in the series with touched up character portraits to make sure that everything looks as gorgeous as possible here. The various stages are still randomly generated for the most part and these block textures have also been reworked to look as great as the sprites, giving battles a completely overhauled look. 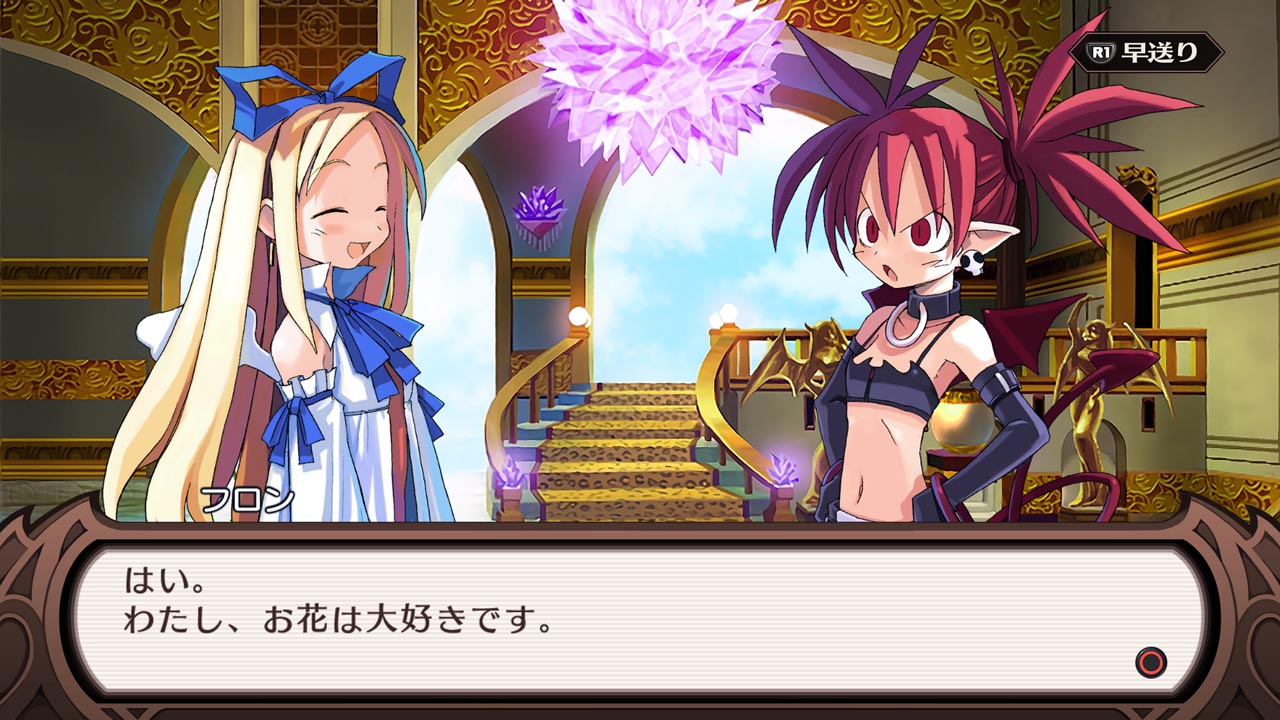 The soundtrack found in Disgaea 1 Complete is filled with memorable background music and other tracks that will delight longtime fans of the series and NIS America has made it possible to choose between either the English voice track or the Japanese voice track depending on your preference.

Disgaea 1 Complete feels like a bit of a mixed bag as it offers everything that a fan of the franchise will love such as the original cast of characters that started it all, graphical improvements that put it mostly on par with current releases, and the ability to mostly bring together a team to fit your playstyle but it also lags behind thanks to it feeling like it is pretty much only an HD release with little else done to set it apart from any of the past re-releases. That being said, this shouldn’t be too much of an issue for those familiar with the series, especially with the Switch version allowing for a perfect way to play a stage or two on the go and get some grinding in, but this does mean that this release is likely only for the more hardcore fans of the franchise.

Disgaea 1 Complete may now be the best way to play the game that kicked off the popular franchise but a lack of recent features or any real touched up gameplay elements leave it as a great game that is likely only for hardcore fans of the series.
7.5