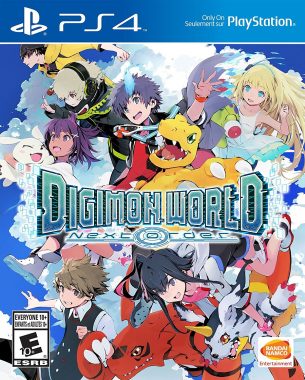 Digimon is one of those franchises that had its peak years ago in terms of popularity, yet still manages to retain its brand through the fans of yesterday via television and video games. After last year’s wonderful Cyber Sleuth, Digimon World: Next Order has fallen onto shelves, bringing a localization to those hardcore fans with an upgraded Vita port designed to flow on the Playstation 4. How does it fare? Let’s find out. 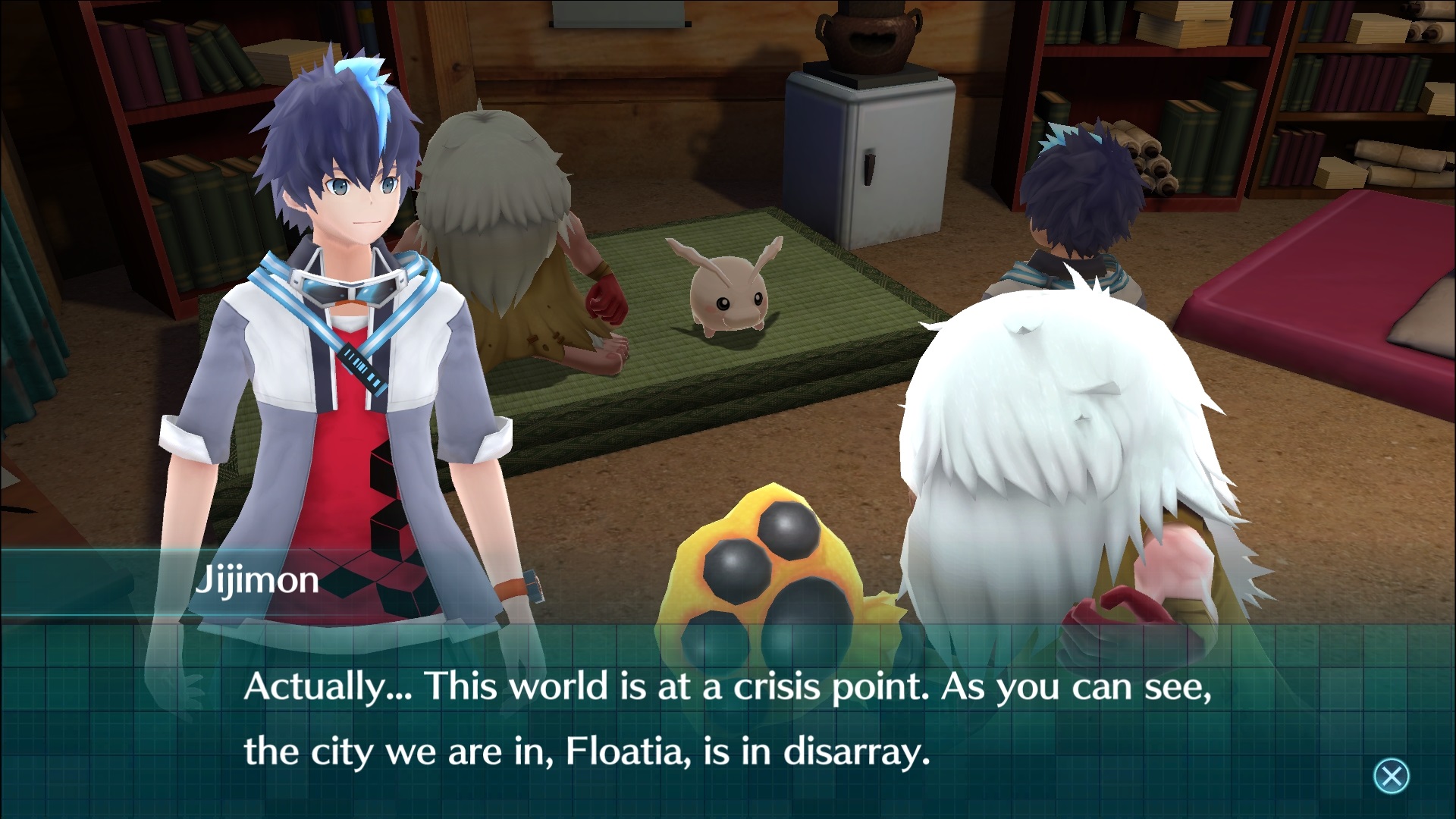 Digimon World: Next Order starts out by allowing the player to select a boy or girl (named Takuto and Shiki), who are young students that are transported to the digital world during a chain of events. After meeting Jijimon (a spunky little soul who acts as a guide for the adventure), the player then has to settle rogue Digimon in order to gain a way back to the real world. Yes, it is a stereotypical “exist because it has to” tale that isn’t too wonderful, but considering the premise of the game is to mainly raise Digimon, it fares just well enough to make this game feel complete. If you are a fan of Digimon, the atmosphere and world you are in will do most of the story-telling for you, so most who opt to go on this digital ride will not feel too in the dark with any event that occurs in the game. 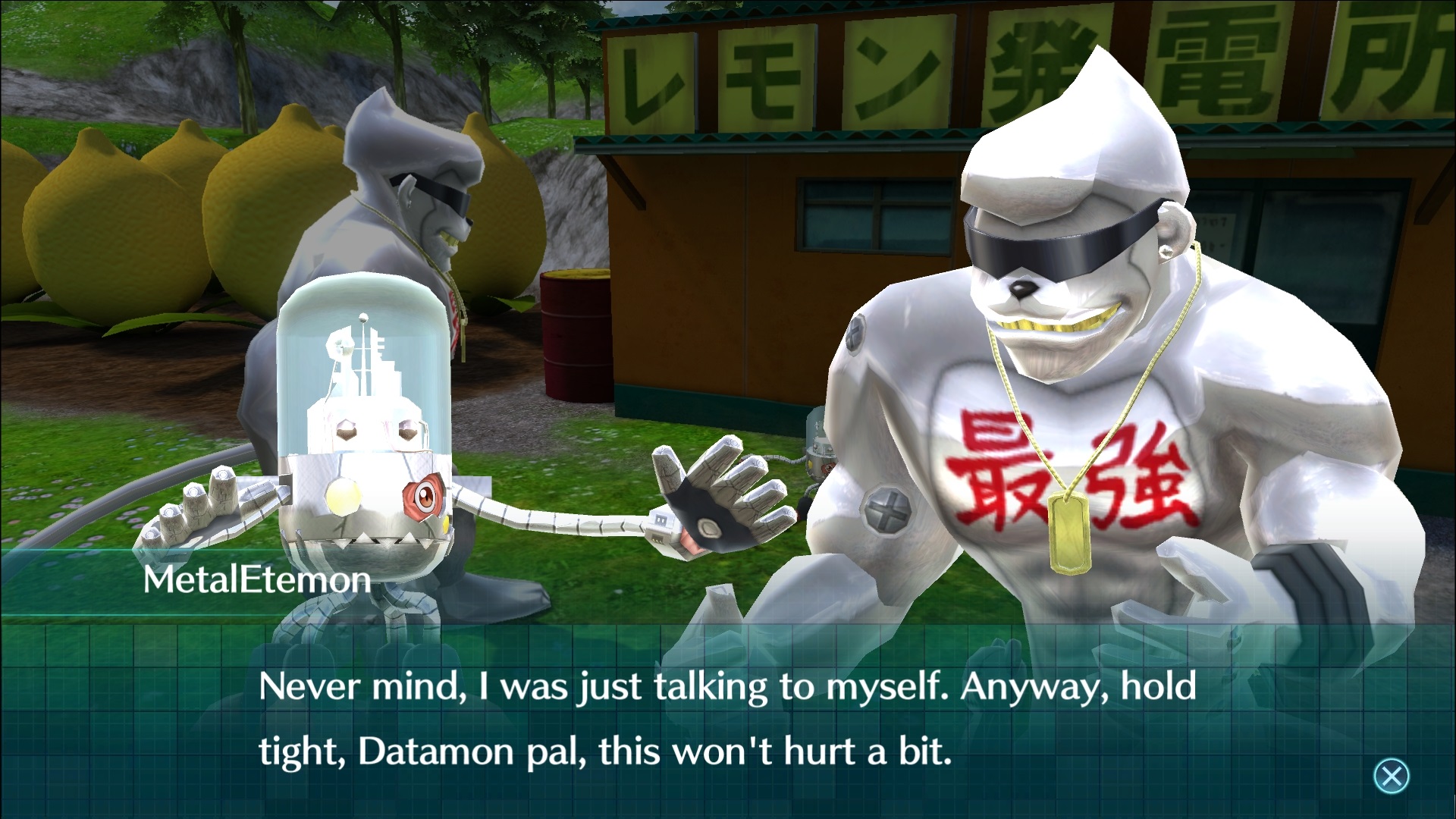 Next Order kind of takes the old Digimon virtual pets and turns it into a much broader experience. I’m sorry, I said “kind of”. That is really what this title is all about and despite a lot of fluff, that is the game you are going to get – like it or not, with your purchase. I hate saying things like “you’ll love it or hate it”, but when it comes to the gameplay, there really is no other way to describe it. Do you mind roaming around and fighting Digimon? Do you like being on small missions and constantly being asked to take care of minor chores? That is what you get here.

Those chores mainly consist of training, feeding, and caring for your Digimon. For an example, one of the first missions you have to partake in is to take your team of two and go into the world, looking for Digimon to befriend and bring back to Jijimon’s small village. When starting, this kind of feels exciting. Exploring a whole new world is great stuff in any title, but then you see a little food icon above your Digimon’s head. Ok. Time to eat. Then the Digimon gets tired – so you sleep. Oh no, they have to go now, but the second one just become hungry – no the other one is tired now. It feels like you are performing this micromanagement game far too much and getting not enough reward for your actions. I get it. We all played with those little virtual pets back in the day, and they were fun. But, I think the focus is on that aspect a bit too much, taking away from the rest of the game – which isn’t too bad as a complete piece. 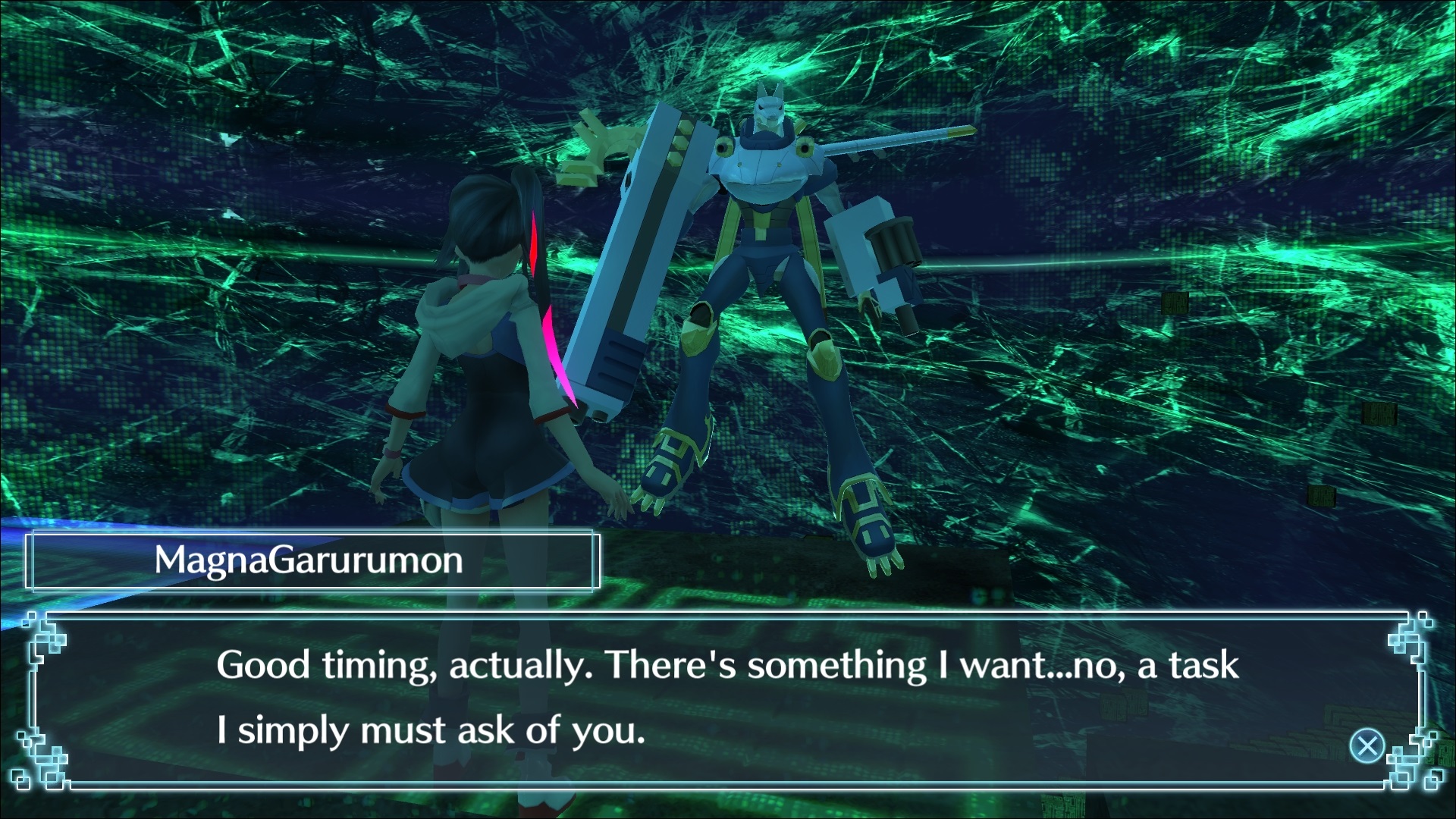 The town itself that you begin at is actually one of the most interesting parts of the experience. Players can bring Digimon back to this area, where they will be a part of the community, setting up shop – creating more items while upgrading the overall appearance of the area slowly as you progress. This means that as you move forward, the reward for progression is slowly creating a bigger world for your creatures to inhabit.

The Digimon themselves are definitely the largest draw for the game, as obtaining the right one will keep players glued in their seats for hours. Each Digimon has to be trained to grow stronger. While you train, the Digimon evolve based on stats, such as HP, MP, weight, and so on. Everything you do from egg to fully Digivolved matters when it comes to the path your Digimon will take, so one wrong move can easily put you with a less than ideal partner. Combat doesn’t exactly do a lot to provide incentive to grind either, as the battles are AI driven, meaning that the Digimon you have will perform maneuvers automatically. The only true interaction your character has during these segments is the ability to cheer on the Digimon with orders, which utilizes an “Order Points” meter that depletes as commands are issued. In other words, Next Order requires a fee for manual pilot in combat. Even then, the camera acts a bit wonky and the battles and despite looking amazing at points – can get hectic and messy quite fast. You’re either going to beat an opponent or you will lose, all based mostly on stats, so if you think screaming a command is going to provide anything other than luck, then you may want to pick a game with a more involved mechanic for that area. Transformations and other game changers such as ultimate moves can be called in battle, but those are more of a quick input deal, rather than just shouting at your team. 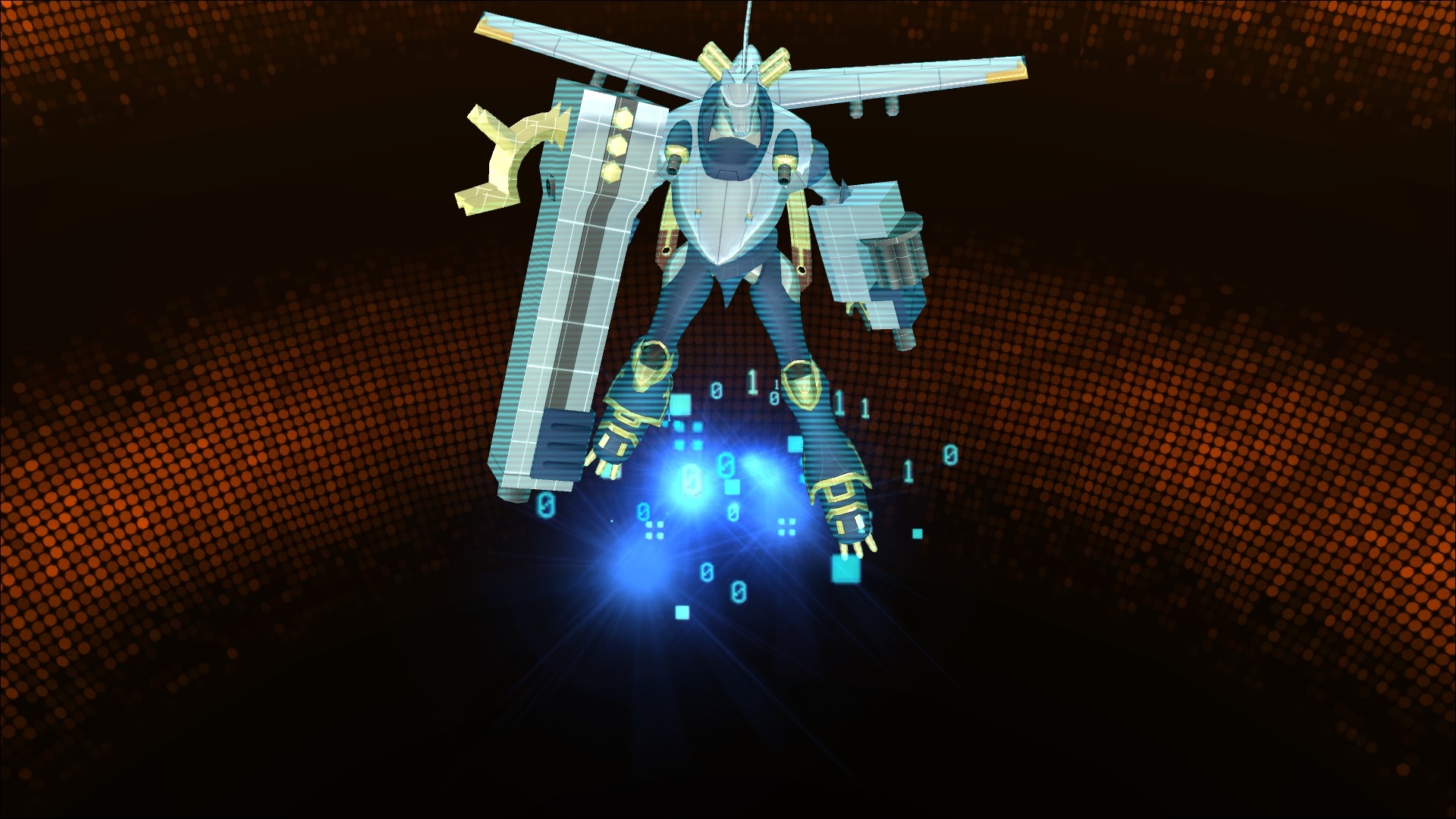 One thing I will give Digimon World: Next Order is its pride in its own complexity. This title does not seem deep from the start, but the massive amount of little stats to keep up with, Digimon to train, and little invisible checkboxes to tick before molding the ideal your experience are so infinite that fans will still be able to look past any flaws and spend a ton of time in this world. Sure, the timing system is tedious and Digimon die within 20 in-game days, meaning you constantly have to work to obtain the spoils, but much like any other title with heavy farming yet mindless monotony, Next Order certainly carries its weight well to keep the player intrigued, just because the rewards feel exciting enough to keep on grinding.

Visually, Next Order is a nice looking title. The cutscenes of course look a lot better than the upgraded in-game visuals, but all in all, most will be content with what is on display here. The menus however still need work, and feel messy and cheap from the start. I don’t mean to come off as picky, but some titles just lack organization with HUD and menus to the point that it harms the accessibility of the said title. This falls right into that category. Animations could have used a little more love, but like the menus, most will not worry too much about how the lack some connections animations as they get used to it occurring. 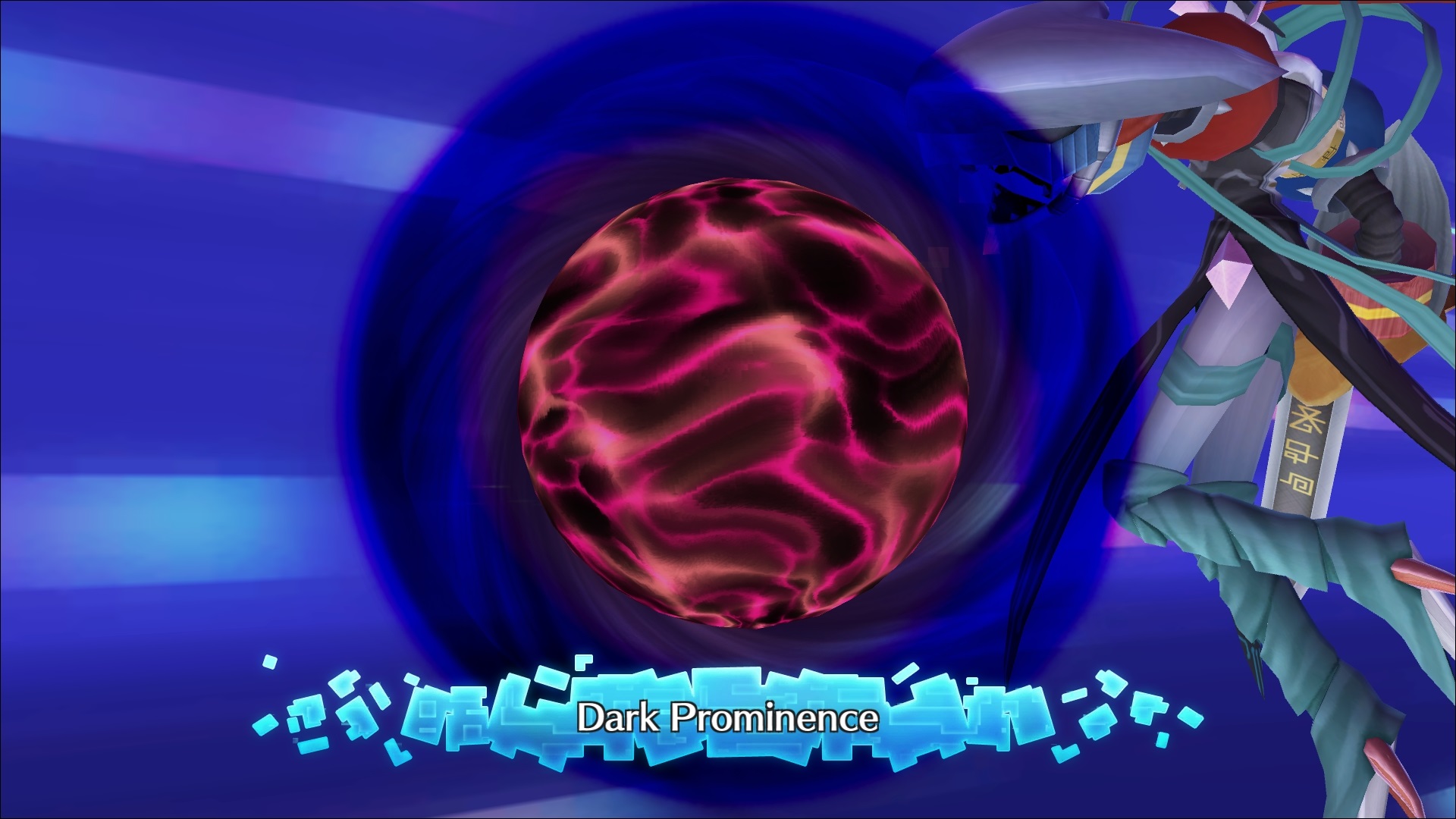 The sound I actually loved. The music sounds familiar and the general soundtrack beams with upbeat tunes that pull out a great atmosphere for the whole experience. The voice acting is also well done, with our digital and human friends alike all sounding fully focused and in tune with the little story in the game. Yes folks, the voice acting here is what will make you get that nostalgia for the anime, as it simply adds another layer to keep fans immersed and entertained.

Digimon World: Next Order is way too complex for its own good – yet never feels so bogged down that it is a worse game because of it. Sure, there are flaws here. Many tasks are overdone, frustrating, and tedious, but if you are a Digimon fan, and I am talking to those hardcore fans who will spend hours to get a Greymon – then you have a great entry into the franchise that you can appreciate. To all others, you might want to test the waters before plunging in at a full priced purchase here, as these waters are much deeper than they appear.

Digimon Return to Consoles With Some New Tricks
7