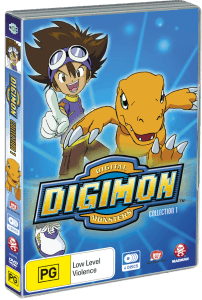 The Digimon Virtual Pet was a toy released by Bandai in 1997 as a ‘Tamagotchi for boys’, and spawned both a massive craze amongst the youth world wide thus beginning the Digimon franchise. The anime based off the toy; Digimon: Digital Monsters (also known as Digimon Adventure) originally aired in 1999 and despite being overshadowed by rival anime Pokémon, gained a massive fan base. At the age of 12, I was one of these massive fans upon hearing that the first half of the original (and arguably the best) season was coming to DVD in Australia after over a decade, I was more than eager to re-live my childhood and review the collection. It was no easy task to throw all bias aside, but I had to ask myself- does the Digimon anime stand the test of time? 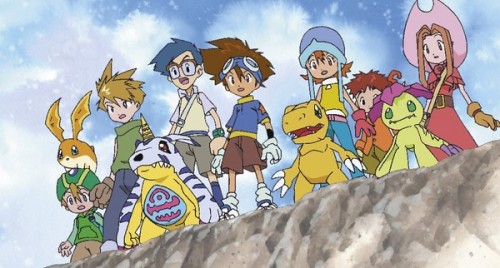 Digimon Collection 1 contains the first half of the first season of the Digimon franchise, where 7 kids- Tai Kamiya, Matt Ishida, Sora Takenouchi, Koushiro “Izzy” Izumi, Mimi Tachikawa, Joe Kido, and Takeru “T.K.” Takaishi. known as the DigiDestined are transported from their school summer camp to a digital world, filled with creatures known as Digimon. As the DigiDestined, they must save both the DigiWorld and the real world from darkness in order to go home. To do so, they are partnered up with their own Digimon who each reflects their own personalities, and later their own crests that represent them. The collection contains four story arcs, where each episode each follows the same repetitive structure, but fresh ideas and creative new characters are thrown in to mix things up so you it’s unlikely to bother most. Following the typical ‘monster of the week’ format, Digimon introduces a new situation and evil Digimon that must be conquered in each episode, usually by the means of one of the main protagonist’s Digimon temporarily transforming into a newer and stronger Digimon through a process known as Digivolving. 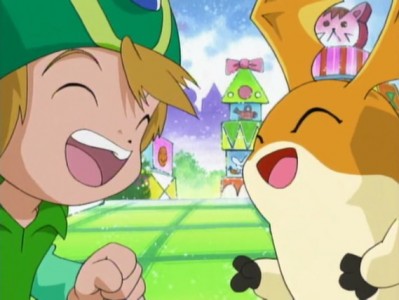 The constant introduction of new evil Digimon in each episode leaves little to no character development for these characters, but thankfully the main cast gets a significant amount to make up for this, proving to be one of the biggest highlights of the series. Surprisingly enough for a kids show, the best moments of the series aren’t the awesome Digivolving segments or the action scenes, but rather the more real, emotional moments showing insights into each character, many of which are the solid basis of each episode especially in the later ones. The characters Matt and T.K. are especially interesting, as well as Tai who leads the group and at first seems pretty simple, but surprises the viewer with insights to his mind in episodes such as Prisoner of the Pyramid and The Earthquake of MetalGreymon. Even the less interesting characters such as Mimi and Joe get episodes dedicated entirely to adding depth to their character, and each are done wonderfully especially in the later episodes, although early episodes like Ikkakumon’s Harpoon Torpedo are especially great at doing this as well. The writers have creatively done this by often separating the group from each other to allow all characters more individual screen time. Many of these moments revolve around the particular theme of friendship and kindness, further strengthening the bond between each characters and on some level, it can be quite touching to watch unfold. While the tactic does seem a bit overused, the trade-off is worth it because we get a lot of interesting personalities that aren’t so black and white. The only downside to this one is a huge one-the series ends up becoming really slow paced. In fact, it doesn’t really feel like the anime even has started until episode 8, and 8 episodes is one hell of a long introduction if you ask me. 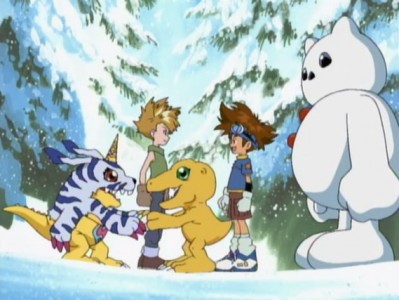 Possibly the biggest flaw in the series is the numerous amount of tiny plot holes, many of which I’m sure even young children should be able to notice. One of these is the use of the Digimon Analyser used in every episode starting since the first episode, but in episode 26-Sora’s Crest of Love, Izzy claims to have just received it off a mysterious man known as Gennai. There are many of little plot issues like this which are painfully noticeable, many of which are errors due to a bad attempts at localizing for an American audience. In episode 27, The Gateway To Home, the children (who have been changed from Japanese to American in this dub) claims to not know where Japan is but still acknowledge that Tai went to Japan in Episode 21. However, in episode 21 it’s revealed that Tai lives there, and even shows you a good look at his house. There are plot holes like this made quite often and the list is too long to even mention here. It doesn’t ruin the anime, but it does disconnect you from it. Despite constant plot holes, constant repetition and a very basic storyline however, Digimon is still a pleasure to watch, but only because the characters are so well designed, and the writers have placed such great focus on character development and exploring the emotional journey equally as much as the physical one. You are drawn in by Digimon not by the story, but rather the characters, so despite all it’s flaws you want to keep watching as the series to see these kids and their Digimon you’ve become connected to. 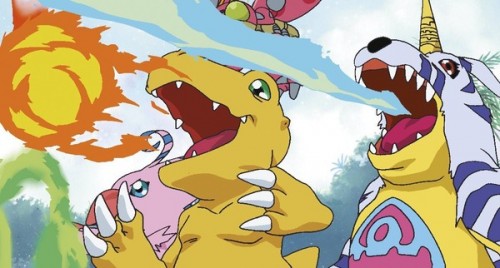 The graphics are a mixed bag for Digimon. One one hand the character designs are amazing, filled with creativity and lively colour and character. In the 21st episode Home Away From Home however, the art style is much more serious and has a less vibrant tone as it is mostly set in a different world. This provides a nice contrast between the two settings that separates them both effectively in a very stylish manner. Backgrounds too are stunning, with a very watercolor painting feel to them. It should be noted some episodes appear in worse quality than others, and graphics unfortunately can look a little blurry. There are also many inconsistencies with lip syncing in almost every episode, where characters, mostly Digimon will talk even without moving their lips when they normally should. Furthermore, when Digivolving into the Ultimate stage is concerned, Agumon and Garurumon have special 3D animated transformations that do look nice, but the rest are stuck with 2D animations. There are some other 3D animations often in backgrounds thrown in here and there throughout the series, and they are always a nice treat to see. In true anime fashion, animated scenes are repeated as often as possible. Every transformation and almost everytime a signature move is preformed, your watching stock footage you’ve seen before. While it’s not terrible, it does feel quite repetitive at times. 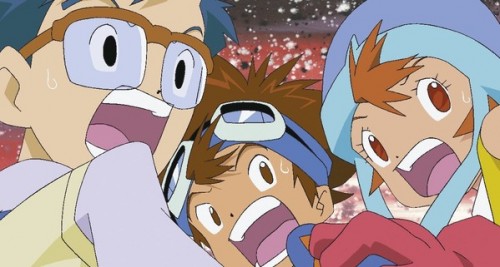 Digimon: Digital Monsters contains one heck of an opening theme song. Simple, catchy and true to the theme of the show, it’ll have you singing along and smiling in no time. Collection 1 also contains one other musical theme with vocals called Hey Digimon. This acoustic track while catchy seems quite out of place and doesn’t really suit the atmosphere of the anime most of the time, especially as it normally comes in during high-adrelanline action/combat scenes it actually can ruin the mood on some occasions. As previously mentioned, not all voices are synced correctly, often with characters talking without moving mouths, but worst of all many voices do not match the situations or emotions on the character’s faces. That being said however, the voices chosen for the majority are well done, especially the main cast. Although many of the minor characters, especially enemies have less appealing voices. Sadly, no Japanese dub is included, and only the English dub is available. 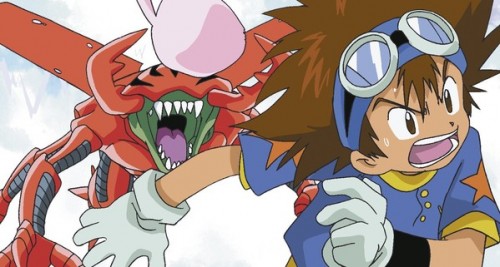 Digimon: Digital Monsters is a classic anime in my books. If you loved it ten years ago, you’ll still love it now, but if you weren’t a fan then, this collection will most likely not win you over. The dub seems fairly lazy, with a mixed bag of voice acting and various plot holes, and the collection itself isn’t wonderful with some seldom episodes slightly less appealing to look at than others, and with no special features other than trailers and no inclusion of the Jap Dub, it hardly does the fans justice. However, the anime is still there and it is full of heart and soul. The character development is insanely great and the character designs are just as epic. Plus it’s got that awesome theme song! While the story may not be all that engaging, the characters are and if you can get past all those tiny flaws, you’ll find one heck of a great anime that is really worth watching. I should also mention this collection ends on a massive cliff hanger, so if you plan on buying this one, you should probably also buy collection 2 which will be released on 19/10/2011. 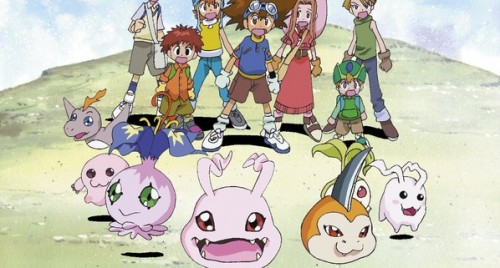