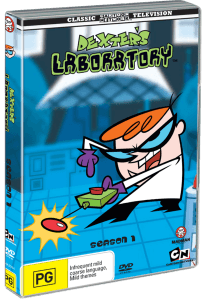 There are a few defining cartoons that children identify with throughout their life, from the day they watched their first episode until the day they revisit it as an adult. When I flicked on Dexter’s Laboratory ten years after I finished watching the series, I felt all of my childhood rush back towards me: the days when 4pm television shows would be my afternoon activity, and when comments from characters aren’t followed by a sly “that’s what she said” remark.

Dexter’s Laboratory, or Dexter’s Lab as I will be referring to it (I am a seasoned veteran of the cartoon, after all), is a wonderful journey back into what it meant to be a kid in the ‘90s. The series comprises of what quintessentially defined Cartoon Network’s golden age: a simple storyline, hilarious scriptwriting, and characters that withstand the test of time.

Dexter is a boy genius who has built his own private laboratory behind a bookshelf in his room. He spends his days at school, and his free time conducting experiments and attempting to push the boundaries of nature with science. However, between Dexter’s annoying sister Dee Dee, who wants to play with everything and is drawn to shiny objects and fluffy toys, and his neighbouring rival Mandark, who’s constantly trying to thwart his experiments, Dexter has a hard time getting any work done. 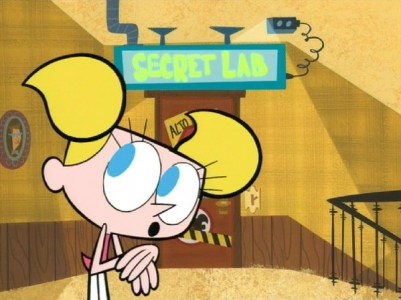 The main story of Dexter’s Lab is one that has endless possibilities. Because there is no real goal Dexter is aiming for, there are varied stories that come from the show: Dexter can be attempting to romance the babysitter, accidentally feeding Dee Dee radioactive cookies, or trying to use his age machine so he can be older and stay up for the late movies on television. The stories themselves work on a stand-alone basis; if you know who Dexter, Dee Dee, and Mandark are then there is no need for further background information. I remember when the program aired on television, I could jump in to the series whenever I wanted and it didn’t matter if I skipped a day or two. Because there are no common narratives that link the episodes together though, there are many issues with continuity. Dexter and Dee Dee could be in a fight where no-one emerges victorious, and in the next episode they will be back to normal again. In this sense, the show doesn’t really have definitive conclusions; rather, each story is tied up in a whimsical fashion that leaves much to the imagination and emphasises the humorous side of Dexter’s frustration with his experiments constantly being interrupted.

In between the eight-minute clips (there are two eight-minute segments in each full episode) the creators also feature a backup segment with a superhero. Be it Dial M for Monkey, featuring Dexter’s monkey creation, or The Justice Friends, these are a brief intermission to quell the short attention spans of children. However, I remember that as a child I hated these short clips, and as an adult I hate them even more: the Justice Friends and Mighty Monkey serve no real purpose but to fill some time. There are some good stories, but the segments are too short to be developed and too long to be witty and punchy. In fact, after watching a few backup segments I ended up fastforwarding through them and just rushing towards the next segment with Dexter and Dee Dee.

Dexter is the main character in the film (you would think, with it being called Dexter’s Lab and all): a boy who is significantly shorter and smarter than everybody else. From the get-go, Dexter reveals himself to be more concerned with his laboratory than anybody else; however, he still maintains aspects of his childish innocence and naivety. Take, for example, when Dexter attempted to seduce the babysitter because he thought she was pretty, or when he wanted to zap himself a few years older so he could stay up for movies. Also, while Dexter is made fun of for his general bookishness, he seems absolutely content with it: he wants to skip out on gym and he believes himself to be the intelligent one (which can, coincidentally, make him very condescending). Dexter is an insight into – and a relatable character for – the child nerd who needs an idol other than the street-smart superheroes. 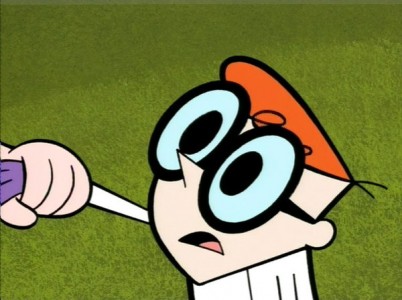 And speaking of insights into things, Dee Dee is the embodiment of an annoying sibling. She stomps, pirouettes, yells, and has the capability to mess up anything. Dee Dee is often stupid, yet sometimes she brings out gems of knowledge through her simplistic life – known as “The Way of the Dee Dee” in one episode. As the antithesis of Dexter, little boys would hate Dee Dee but because I’m a girl, I’ll settle for describing my emotions towards her as ‘strongly dislike’ instead: she can be charming at moments, and really, without her there would be no story.

The rest of the characters are a smorgasbord of personalities, but they all fit the cartoon archetype that was established long ago: Mandark as the irritating rival, the father that always says “ask your mother”, and the mother that lives for cooking and cleaning. While in standard television series’ archetypes would be a bad thing, in cartoons like Dexter’s Lab (where episodes are so short and sweet) characters have to rely on stereotypes to function; otherwise the entire story would be spent trying to develop each person. What is also wonderfully charming is how oblivious the characters remain to everything: when Dexter zaps himself into an elderly man, the other characters assume he is just the grandpa.

The animation is in traditional Cartoon Network style: simple, yet appealing. Dexter’s home does not house terrifying amounts of detail, yet there is enough there to reaffirm all of the characters: Dexter’s door has “no entry” signs plastered over it, while Dee Dee’s has her iconic ballet poster. These small but significant things are what really help build the overall atmosphere of Dexter’s Lab and as children or adults, we come to love these details that contribute to the world that is Dexter’s. Interestingly, I didn’t find the animation outdated; often when I watch the earlier episodes of The Simpsons it is so clear that they were made with inferior technology, however Dexter’s Lab is consistently simple – and, as a result, consistently effective. 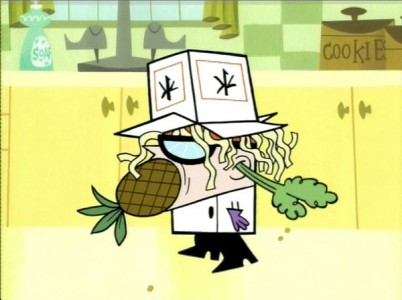 Notice the cookie jar in the background, or the soap dispenser?

Likewise, the sound effects are not realistic or extremely high-tech, but they hold within them that childish silliness we all like to go back to now and then. Dee Dee’s stomping sounds like a miniature earthquake is hitting the house, but it works because for Dexter, that is what it feels like. The SFX are reminiscent of a time when realism was shunned in favour of creating an atmosphere, and Dexter’s Lab does exactly that. It doesn’t matter if Dexter doesn’t really squeak as he walks; instead, it’s all a part of the charm of his world.

The voice-acting is, as well, iconic to the series. Dee Dee sounds like a buffoon (for lack of a better description) and her voice really brings out her ditzy nature; Dexter’s mom, on the contrary, sounds like every other American mother that tells the kids to do their homework. What is most iconic, though, is Dexter’s accent. I never realised this when I originally watched the series, but now I have a major question: why was Dexter Russian? Is Russian supposed to be the language of scientists, or did the creators just feel compelled to make him sound different since he is smarter than everyone else? Regardless, it’s all a part of the whimsical characterisation that makes Dexter so loveable; without it, the show would be missing that little bit extra.

The DVD comes with a Dexter’s Lab door hanger (what everyone needs, right?), and two pilot episodes that aired in the 1980s show What a Cartoon! Both episodes are fantastic – it’s a shame that I didn’t get to see them as a child – and really showcase the best of Dexter and Dee Dee. It’s a great little bonus that’s thrown in for us and for fans like myself, it is absolutely delightful to be able to see what Dexter was like before Cartoon Network began airing it. As for the door hanger…give it to a little brother who likes science!

And to Dexter: even though I’m surrounded by the bookish type every day, you will always be my favourite geek.

I give Dexter’s Lab