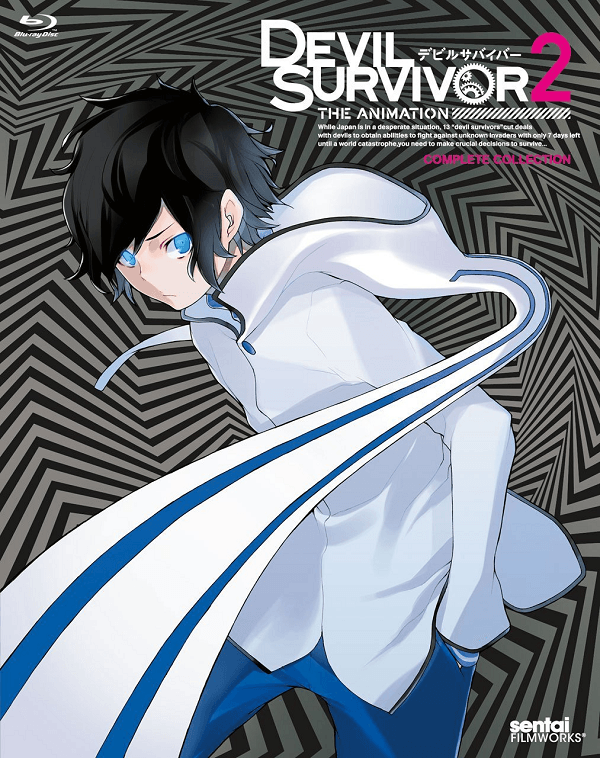 Overview
Adapting a video game into an anime series can be seen as something of a balancing act. Should the team try and please fans of the games or should they try to make the anime as appealing as possible to newcomers to try and bring more people into the fold. This is especially true when you have an adaptation of a fairly popular title such as Devil Survivor 2 which was recently given an enhanced 3DS release in the West. So with Devil Survivor 2: The Animation now available on Blu-ray, is the series worth picking up?

Story
On an average Sunday afternoon Hibiki Kuze and his friend Daichi Shijima are getting ready to travel back to their homes. While killing some time before heading back Daichi installs a new app called Dead Face onto his phone. Death Face allows friends to create videos showing off their other friends being killed in various manners. Despite the macabre idea, it seems innocent enough until both of their phones immediately update showing a video of both of them being crushed beneath a derailed subway car. 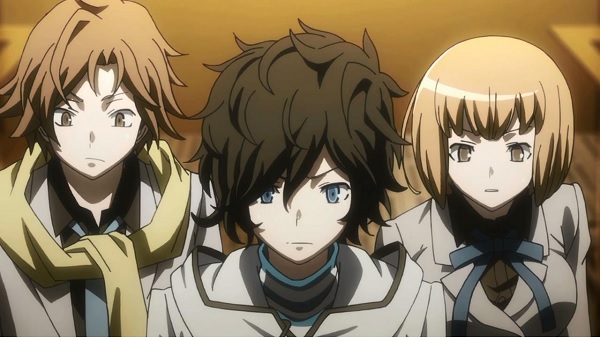 Believing the video is simply a joke, they continue to head home only to find that they everything about their subway station matches the video perfectly. Before the two can act, the train car begins tearing through the station and appears to crush not only the two boys but also one of their fellow students named Nitta who was also in the station. Despite his apparent death, the Death Face app prompts Hibiki if he wishes to continue living and after selecting yes, he awakens with no injuries.

Not only has Hibiki managed to survive, but his friend Daichi and Nitta have also managed to survive the wreck. Unfortunately their relief is brief as strange demons have already begun feasting on the bodies of the deceased and when suddenly Nitta’s phone summons a demon out of thin air to defend them, the three manage to escape the situation only to find above ground that the entire city has suffered massive damage from an unknown event. 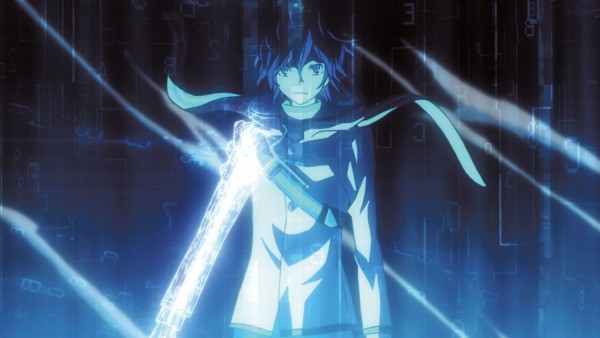 The three are quickly picked up by the mysterious JPs government battle force where they learn what is really happening to the world. It turns out that mysterious creatures called the Septentriones have begun appearing and are systematically beginning to wipe out the human race and it is up to “Summoners” who have been gifted with the ability to call demons into reality to put a stop to it. With Hibiki able to call upon one of the strongest demons to start with, he joins with the JP to try and put a stop to things, only things are far more complicated than they first appear as rebel organizations appear, questions about the leader’s motivations arise, and the body count rises due to questionable decisions.

Devil Survivor 2: The Animation is an adaptation that has taken and tried to put its own twist on the original story which means that fans of the game will likely be more frustrated than anything else. Even newcomers will find that this adaptation has very little going for it due to poor writing and the way that despite having some nice ideas, everything begins to fall apart as the series progresses into a rushed mess of development and poorly explained ideologies. It also doesn’t help that the arbitrary distribution of demons with little explanation and the sudden appearance of demon fusion leaves those who know nothing of the source material (and therefore able to enjoy the series for what it is) in the dark. 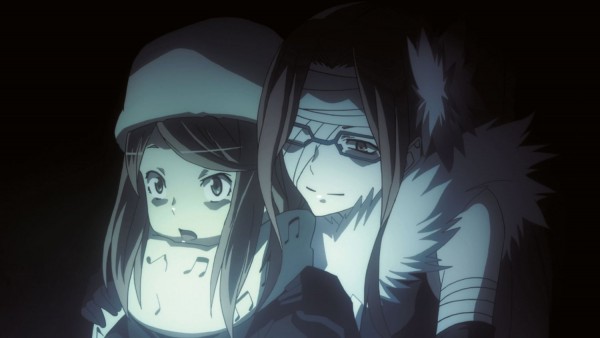 The death of an introduced character comes off as shocking initially but then becomes something that viewers almost come to expect due to the nature in which they are handled. This may fit the darker theme that Devil Survivor 2: The Animation wanted to go with but without proper character development or feeling like there was actual meaning to their deaths, killing characters off for shock value quickly loses its luster.

Devil Survivor 2: The Animation feels like it wished to be so much more and maybe if given a full twenty four episodes it could have done something with that. Instead what it became is a mildly entertaining series with plenty of interesting concepts and content from the game to please most fans only for it to eventually become a standard “battle against the end of the world” type of series with a well-known franchise attached to it.

Visuals
Something that fans of the Shin Megami Tensei series will notice throughout the title is that the animation studio paid quite a bit attention to detail when it came to drawing and animating the various demons that players can summon in the game. Since many characters obtain demons ranging from common to legendary types fans will quickly remember them. The same thing can be said about the characters as the designs of the cast are quite fitting considering they were adapted from what was a DS title. 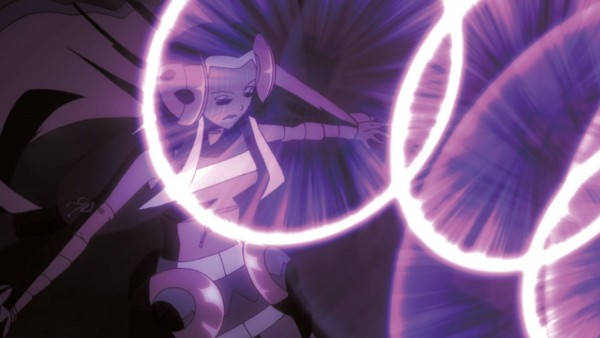 Those who haven’t tried the games before will still appreciate the variety of demons that appear, the flashiness of some of the special techniques, and how decent most of the fight scenes appear, though quite a few filler scenes are used throughout some of the longer battle sequences.

Audio
It is worth noting that despite Devil Survivor 2: The Animation being released on Blu-ray, the original English release came before the English release of the enhanced version of the original title, meaning that unfortunately the English voice actors that Sentai Filmworks recruited for the series are not the same as those found in the game. This isn’t too much of an issue however as most of the characters are handled well enough in the dub, though Hibiki’s voice actor doesn’t feel like the best fit, and the Japanese voice track is also included for those who would rather choose that option. 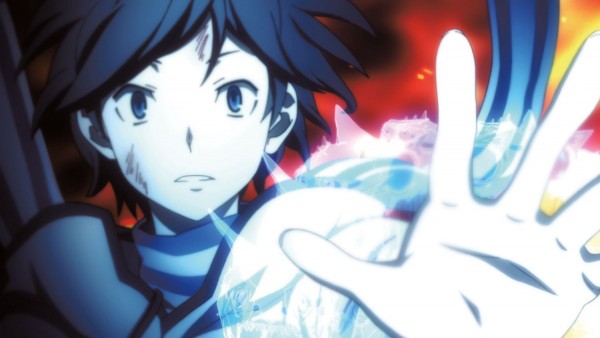 One thing this title does take advantage of is the great soundtrack that accompanied the game it originated from. Many times throughout the series do memorable tracks begin playing, including some that do a great job enhancing the emotions of particularly striking scenes. As far as the opening and ending themes go, the opening “Take your Way” by Livetune is a fitting opening for a series such as this but one must take special note of the ending theme. Not only is the song, “Be,” by Song Riders a beautiful fit for Devil Survivor 2: The Animation, it is also accompanied by an ending animation that really starts to hit home once the viewer notices that as the series progresses, the animation begins to grow rather barren.

Extras
Sentai Filmworks has given the Blu-ray release of Devil Survivor 2: The Animation most of the standard bonus features found with their releases, including a clean version of the opening and ending theme and disc credits, though they have also released the series with a neat slipcase featuring alternate artwork from what is found on the case.

Overall
Devil Survivor 2: The Animation is the type of anime adaptation that tried to do something different with the source material and ultimately becomes a series without any lasting impact. Although fairly interesting throughout and initially shocking when the first casualty appears, the series is best enjoyed at face-value with little knowledge of the original games as those who have experienced the source material will simply be left wondering what the studio was thinking.