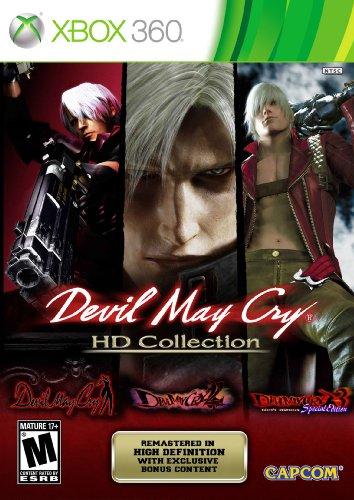 Overview
Before Vanquish, Before Bayonetta, and before God of War, Dante burst onto the scene in 2001 and introduced the world to a new type of action game. While third person hack and slashes were very much around 11 years ago, the Devil May Cry franchise brought about a more stylized and polished form of combat, with a killer soundtrack and top notch character designs to match. Today, the series has a hardcore cult following due to Dante’s past masterpieces, and lately, the entire fanbase has been awaiting the series reboot from Capcom, simply titled DmC.

I’ll admit it. I don’t care for HD remakes that much. Due to how much the industry has changed, playing an older game on a current console is just not the same. The flaws are more obvious, the newer graphical designs can seem forced and pixelated, and what was exciting and fresh then is now below average by today’s standards. This collection is for the first three Devil May Cry titles though, and if Capcom know anything about their fans, it’s how to tap on our nostalgia soft spots. How does everything fare as a complete package? Here is my review for Devil May Cry: HD Collection. 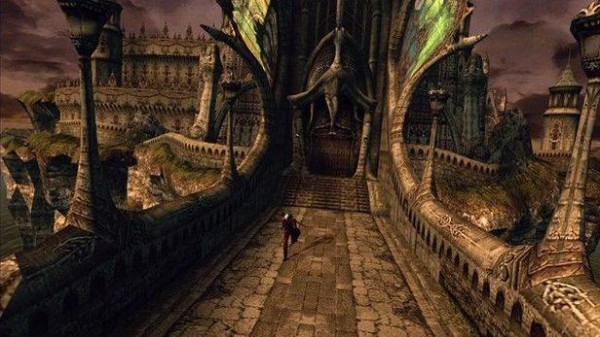 Story
For those who were unaware, the Devil May Cry series is not actually in order in terms of release, as Devil May Cry 3 serves as a prequel to the first game. Even with the odd numbering though, this franchise’s narrative is still as intriguing as ever and of course stars the badass demon hunter, Dante. The original title has Trish send Dante on a journey to take out the demon emperor, Mundus on Mallet Island, while the second steers to another territory and has our hero fight off a sharply dressed demonic entity known as Arius on yet another mysterious isle. In the prequel (DmC3), players get to learn more about Dante’s brother, as well as how the shop titled “Devil May Cry” came to be.

Those who are new to the franchise don’t have to pick a title based on it’s numerical order, as each plot stands strong on it’s own and doesn’t require playthroughs of the other titles on the disc to properly enjoy. With that said, Dante’s own story is expanded upon greatly throughout the trilogy, and learning more about the cocky main protagonist is plenty of reason to go through each Devil May Cry, even if the second isn’t quite up to par with the rest. One of the strongest elements this series had going for it was characters, and luckily each antagonist or ally you come across still has the same charismatic or sadistic charms, and that agelessness of the cast is further proof of why this trilogy is still very much relevant in today’s world of un-fulfilling sequels that are filled shallow and meaningless encounters.

Gameplay
Running through all of the gameplay aspects of each game in the collection could take up pages, so with these remakes it would be best to just inform you of the basics. Devil May Cry as a whole plays out like your standard hack and slash action title, but with flips and flare thrown in to make the entire experience stylistic. Dante is a graceful swordsman, and can run up walls or float over an enemy to perform a kill. Players are also equipped with a set of pistols that can be used at anytime, which allows for a bit more variety to be used while taking down demons or the famed underworld bosses within the games. Bringing the combat full circle are the combos, which track the number of hits the player gets off before being interrupted. The more violence you incite, the more you are rewarded. That concept is the heartbeat of the trilogy and is honestly what made the games stand out then, and even more so now. 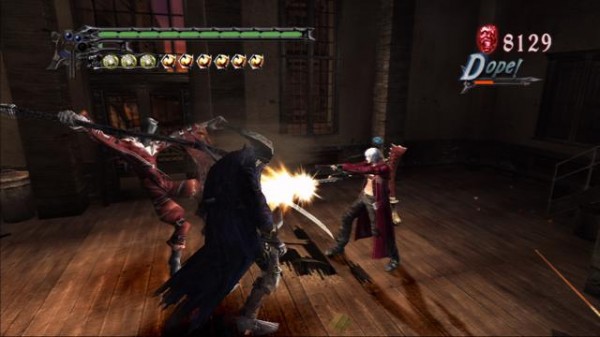 Evasive maneuvers also tie into the combat mechanics well, and make it easier to continue a chain without being stopped. Even though the story is what pushes the game along, the ultimate objective in each stage is to perform flawlessly and obtain the highest rank possible at the end. Weapons can be upgraded over time to make this easier, and each stage can be revisited later for those who crave perfection. It’s a solid scheme that allows for plenty of reason to keep going back in for more and luckily, extra characters can be unlocked to play through the entire game with all over again (for the 2nd and 3rd installment) that have a completely different feel from Dante. 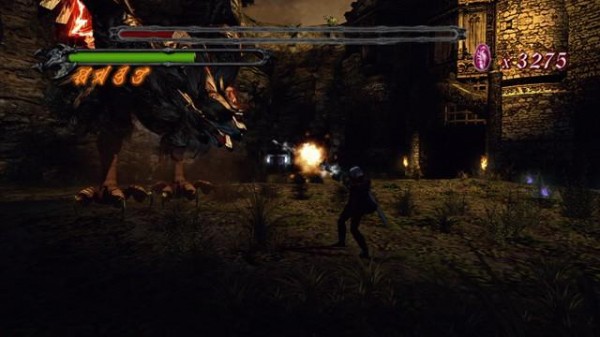 As far as differences go, the black sheep of the trilogy is Devil May Cry 2. Not only is this title the easiest of the three, but it’s also the shortest and the most mediocre. Yes, the narrative and general gameplay are still decent, but a lot of the challenge was taken out for this entry and boss battles require a lot less strategy compared to the much more in-depth fights seen in Devil May Cry 1 and 3. On a higher note, I did find the world to be a bit more open and easier to explore, as it’s easy to see that this sequel attempted to rid the linear aspects from Dante’s first outing. It’s still the weakest out of all of the Devil May Cry series, but playing through all of these years later has definitely made me appreciate it’s existence more. 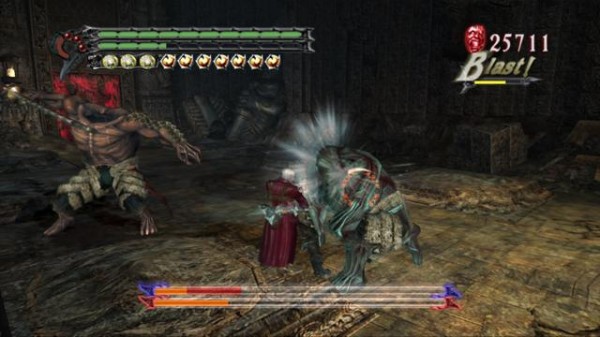 Devil May Cry 3: Dante’s Awakening is the standout release on the disc, and players have been treated to the Special Edition, which includes new bosses, the option for faster combat, and a lengthy yet enjoyable survival mode. This title also brought about varied fighting styles, which gives the player a choice of six different styles and switch between the lot at the beginning of each stage.

Visuals
Everything I have mentioned so far should be known about Devil May Cry as to be honest, these three titles are old and a good number of us beat them to death years ago. This is an HD Collection though, and while the combat and story is the same, the graphics have been revamped entirely…well, almost entirely that is. Each model has been given a new coat of paint, making them now appear much smoother and ridding the characters from any unwanted pixelation from the past. Dante, Trish, Vergil, and the rest look better than ever before, and animations have been stabilized to run fluidly on any high definition television. This is great news considering the high emphasis on stylized animations, but those who wanted the same treatment for cutscenes will be a bit disappointed as they have remained untouched, leading to a glaring change when going from combat to a pre-rendered movie. 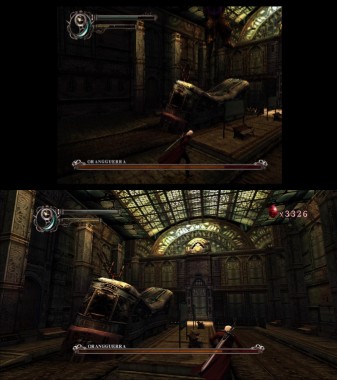 The textures within the environments appear to be a bit smoother, but it’s also a bit obvious that these areas were given much less attention than Dante’s (or any other characters) model. It wasn’t too long ago that I gave the original Devil May Cry another spin though, and I must say the gothic charm of the art design is still very appealing to myself, pixelated or not. As far as menus go, the main menu is rather generic and only acts as your hub to choose a title to play. Once you are in a game, you also must completely reboot the disc to choose another title. This is the norm for HD collections, but it would have been nice if Capcom could have combined content that was originally split on two discs (like the two campaigns from Devil May Cry 2) into one game.

As far as the sound goes, things have definitely improved, but nothing has really changed. That’s a good thing, if you were wondering. The rock soundtrack still blares up when enemies approach and what was great voicework then still stands strong today. Yeah, there are still some awkward pauses in dialogue and a few hiccups with the score, but it’s hard not to appreciate how much went into making this dark atmosphere come alive.

Overall
It’s easy to hate the existence of a HD Collection, as if done wrong they can harm one’s perspective of what might have been their favorite game of all time. Devil May Cry’s treatment however was pulled off to near perfection, stapling one of the most influential series together into one package for fans to enjoy for the first time, or all over again. While the artistic design will always remain as stunning in my eyes, the incredible combat system keeps Dante not only feeling timeless, but legendary as one of the heroes that truly kicked the action genre in the ass and showed the world how it was done…with style.