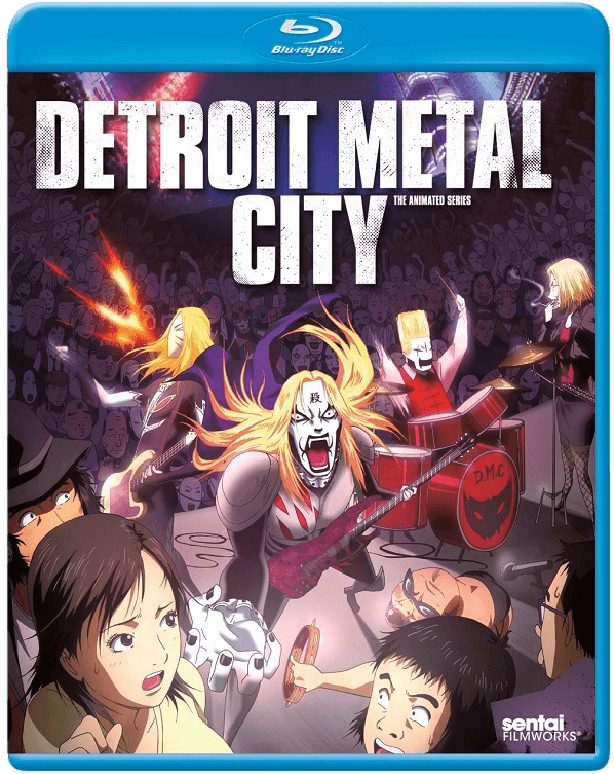 Overview
While some fans of heavy metal bands might believe that their favorite artists may always act like they do on stage, that usually isn’t the case. Such is the case with Detroit Metal City, an OVA series that debuted in Japan back in 2008 and was adapted from a ten volume manga of the same name. Featuring vulgar comedy and a crazy style, Sentai Filmworks recently released Detroit Metal City on Blu-ray is this strange and explicit anime worth purchasing?

Story
Soichi Negishi grew up on a farm in the countryside with loving parents and a brother who looked up to him. After moving to Tokyo to attend college and make friends, everything seemed to be going great for Negishi who had a knack for soft music and other types of fluff that even the simplest person would find mundane. So how does this admittedly dull as dishwater guy end up in a world full of mosh pits, drugs, and music filled with vulgar and cruel lyrics? 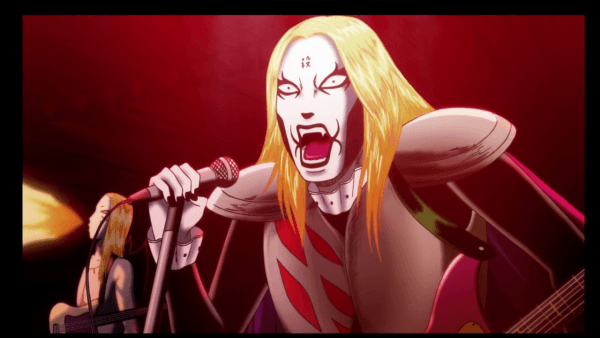 Well that isn’t explained much, other than the fact that Negishi, who only wanted to sing Swedish pop music, ended up falling in with a manager that turned his talents towards becoming, Johannes Krauser II, the lead guitarist and vocalist in DMC, a violent death metal band that is one of the most popular indie bands in Japan. Thanks to Negishi’s portrayal of Krauser and the band’s brutal lyrics about murder, rape, incest, death and everything in-between, Detroit Metal City is something of a one-note dark comedy that is admittedly hilarious.

Thanks to the way that Negishi is so dull in his natural state and insane while portraying Krauser we see a tale of two worlds and personalities. Everyone in his normal life thinks that Negishi is such the nicest boy who couldn’t hurt a fly while as Krauser he bites the heads off of bats and screams about murdering his family. In fact the best parts of Detroit Metal City are when his professional life invades his normal one, such as his oft-drunken manager invading his room with two metal heads in order to “Metal Up” his life only to begin abusing his elderly neighbor and reverting him back to his dangerous teenage days. 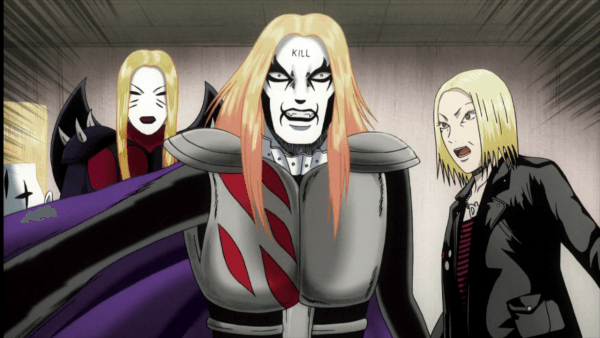 Considering there is no real storyline to Detroit Metal City other than Negishi struggling to avoid his secret life as Krauser and DMC from being exposed to his family back home and those around him, it is good that the entirety of this release is contained in thirteen minute episodes that are split into two separate halves. This contains the sadistic craziness that oozes out of every story that Detroit Metal City has to tell to a manageable level as every single episode will feature something crazy and twisted happening, whether it is Krauser violating Tokyo Tower, stepping on and abusing the “Pig” that is with the band, assaulting and violating a soft-rock artist on TV and worse.

There is a dark nature to the comedy in Detroit Metal City and if it wasn’t for the absolutely absurd nature of the show and the way that everything is presented, almost all of the jokes could be considered extremely offensive and cruel. That being said, one cannot help but laugh at the train wreck that every event ends up becoming because the series doesn’t tone anything down, it only ramps it up. It is also a decidedly vulgar series, if that wasn’t already quite apparent, as DMC’s female manager constantly talks about how “wet” she is getting from the band’s performances and the BDSM treatment of a certain character, and the general actions and lyrics of DMC. 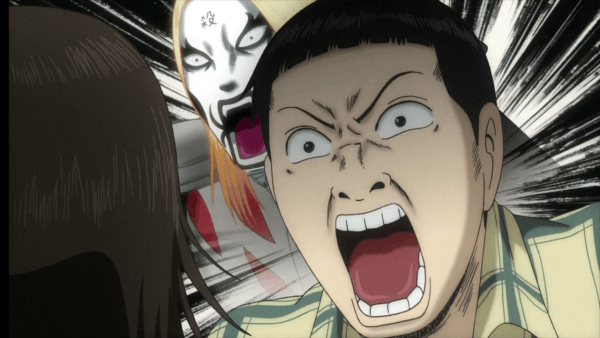 Another aspect that makes this mean-spirited series entertaining is the way that it lampoons the nature of the music industry. As DMC encounters other bands of different genres we see just how ridiculous most subcultures are, especially in the death metal circles. All the while we have Negishi dealing with the fact that his persona as Krauser bleeds into his life as Negichi, causing this mild-mannered boy to scream obscenities at those around him or perform outrageous acts and also struggling with how terribly received his attempts at pop music are while his DMC fans cause riots with how excited they get at his events.

Visuals
One can say that the way that everything is drawn in Detroit Metal City is fitting, simply because of how ugly most of the character designs are and how ridiculous looking some of the animations are. The designs of Krauser’s outfit and the few performances by DMC that actually are shown in full show that the studio has a quite a bit of talent on their hands, but instead most of the series is as rough looking as the jokes are. 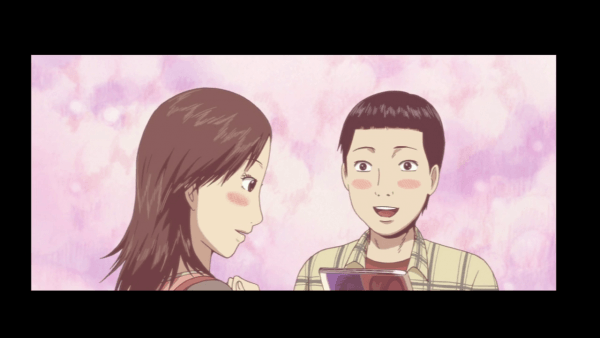 A range of art styles are used here, as most of the series features a different looking animation style than the aforementioned performances and this causes most of the characters to look absolutely ridiculous with bland backgrounds and simplistic looking scenes. Perhaps this was intentional thanks to the way that many of the visual gags are handled and the way that the aspect ratio of the series shifts into various aspect sizes similar to a manga panel.

Audio
Sentai Filmworks has released Detroit Metal City with only the original Japanese voice track, which is something of a shame as it would have been interesting to hear how ridiculous most of the dialogue sounds in English. That being said, the actual voice work is fitting but decidedly vulgar as swear words are laced in with standard dialogue and the band’s manager loves dropping F bombs. 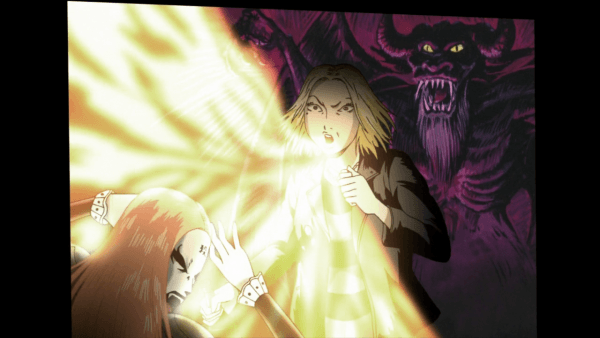 That doesn’t even touch upon the lyrics that make up most of DMCs songs throughout the series. The lyrics are as ugly and terrible as you can imagine in DMCs music while the similarly terrible soft pop that Negichi sings in his of time is just as cringe-worthy. This whole aspect is represented with the opening and ending themes of the series, with the opening being a brutal metal song “Satsugai” by DMC and Krauser while the ending theme is a fluffy pop song “Amai Koibito” sung by normal Negishi.

Extras
With this Blu-ray release of Detroit Metal City Sentai Filmworks has only provided a clean version of the opening animation and trailers for other releases from the company.

Overall
Detroit Metal City is a series that lives and dies on whether or not you will be able to laugh at the absurdly offensive material that plays out every episode. Thankfully, with how it is presented, it is hard not to laugh at how ridiculously crude and outrageous the entire series is. It also helps that there is some reason to the madness that is Detroit Metal City as the series takes swings at numerous music genres all while Negishi despises his current lifestyle but isn’t afraid to embrace it when he must. Those who can find Detroit Metal City’s cruel brand of dark humor will find a funny series that holds nothing back but those who don’t should run.