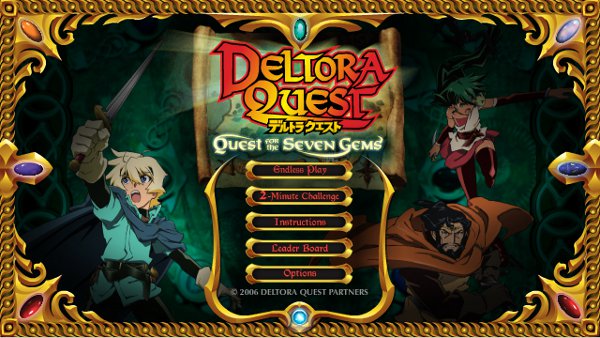 Overview:
Deltora Quest is an anime based off of a book series, that tells the story of Lief, Barda, and Jasmine, three individuals out to retrieve seven gems and return them to the Belt of Deltora to save it from evil.  A fairly exciting premise for a series, though apparently at the mere mention of gems it seems that the online flash game Quest for the Seven Gems could only go in the most obvious direction and make a match-three game.  Well, seeing as it was a show only shown on the Australian and New Zealand Cartoon Networks, it makes it a little easier to understand going in such a direction. 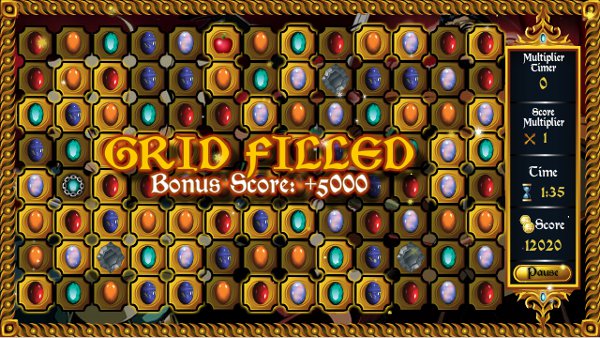 Story:
As mentioned before, Deltora Quest revolves around finding seven gems and returning them to the Belt of Deltora from whence they had previously been.  Ultimately, reassembling the belt will put an end to the terror that The Shadow Lord has wrought upon the land after having the belt destroyed.  Interestingly enough, the name Deltora is derived from the gems in the belt itself, i.e. Diamond, Emerald, Lapis Lazuli, Topaz, Opal, Ruby, and Amethyst.  Unfortunately, as cool as that sounds the game doesn’t actually talk about any of the story itself, being a simple match-three puzzle game, midst an internet filled with the things, so what Quest for the Seven Gems does different, isn’t story related.

Gameplay:
What this game does differently is that it provides a much wider field of play than a lot of the other match-three games, remain consistent in terms of colors, adding a wild token midst the gems, and have matching tiles slowly brighten the board.  What do these mean for gameplay itself?  Well first, it is really nice having a fairly wide play area, being able to look in a fairly removed location to look for more matches does ease the strain of re-looking over the sames areas over and over, so players can generally keep the matches going at a better rate. 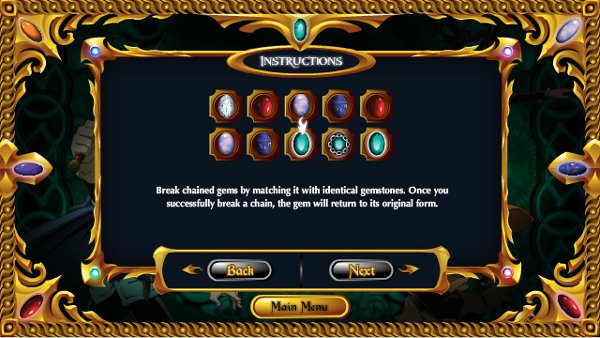 Throughout the entire game as well, there are only seven colors, plus the Shadowlord tiles that don’t move.  This will probably make it a little harder to get used to the game at first, as similar games start out at fewer colors to start with, but once a player has it down there isn’t any additional learning curve.  Also, when gems become “chained”, i.e. having a chain placed around them, it doesn’t mess up gameplay by requiring players to work around them, instead they must simply be matched twice.

The wild token is represented with an apple and it is one of the means to better combat the difficulty of starting out with seven different colors to match.  It is far different than the other gems, so it is much easier to distinguish quickly when trying to scan through the wide range of the play area.  This is a simple addition, but can generally help a lot in chaining matches together and keeping players from becoming completely stuck. 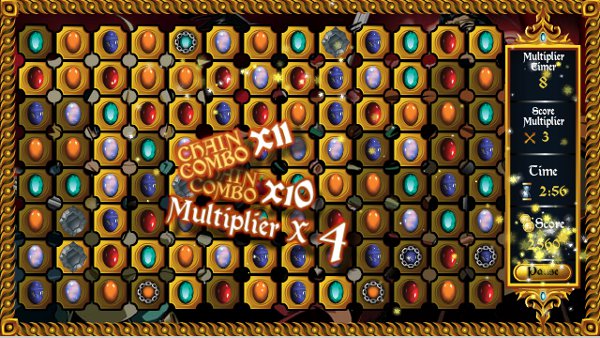 Lastly, when making matches it will slowly turn the board to gold at every point a match takes place.  This actually means different things for the two different game modes.  “Endless Play” continues as long as the player has time for the current round, and they pass each round by turning every tile gold.  So, it is required to get all the tiles golden in order to keep playing.  In “2-Minute Challenge”, players only have the single round with 2 minutes to play, but turning all the tiles gold will afford them bonus points.  This seems to be a better means of conveying an overall goal than just requiring an almost arbitrary number of points to progress and makes it easy for players to tell what they have left to do.

Audio and Visuals:
As this is a puzzle game, both of the audio and visuals are incredibly limited in scope.  Besides all the game pieces and borders, the only other art is the background.  But since the background actually features the main characters from the show, it is probably the closest thing to story in the entire game.  The gems themselves look good, well they don’t match exactly how one would expect to see them in real life, but they are designed to look different enough both in terms of color and pattern as to not be a problem for players. 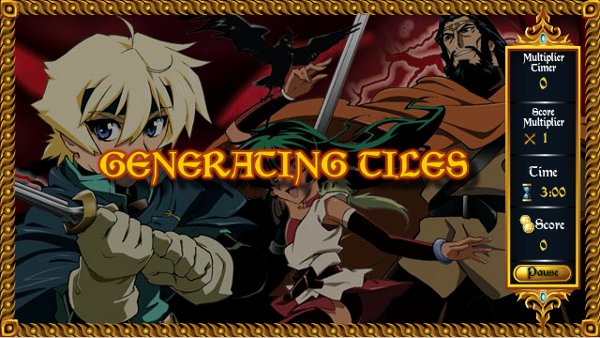 Audio is limited entirely to music, matching sounds, and multipliers.  Matching and multipliers are pretty straight forward, simply acting as dings to indicate them happening, but admittedly if there is a longer line of them chained together it does sound pretty satisfying to hear.  The music actually has a decent range from the menu, to starting a game, to the different modes.  The menu and “Endless Play” are set up with strings that actually flow pretty peacefully, while starting either mode preps the player by having a heavy drum based sound to it, but the “2-Minute Challenge” features a organ or piano melody to fill it time.  It’s actually kind of nice to see that much variety in the music.

Overall:
Ultimately, Quest for the Seven Gems is a match-three game, but it is good to see that a decent effort was put into the actual game.  It features a fair amount of reasonable additions to the bare minimum format of that game and actually has some semblance of musical range.  Players looking for an old favorite, might be interested in checking out this take, but fans of the series probably wouldn’t be getting that much out of it.  I give Quest for the Seven Gems