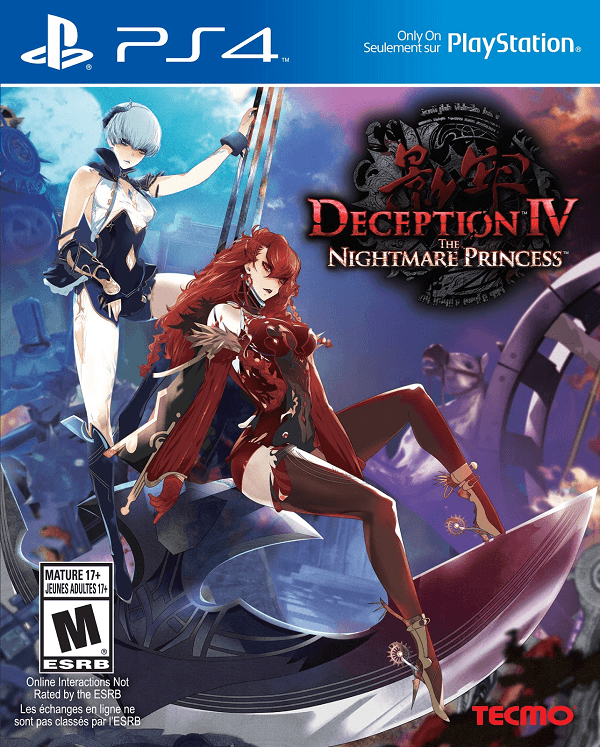 Overview
The Deception series saw quite a bit of success on the original PlayStation and PlayStation 2 consoles due in part to its trap-oriented gameplay that no other title had ever attempted before vanishing for nearly ten years. Then Koei Tecmo revived the franchise with the release of Deception IV: Blood Ties which brought back the type of trap oriented gameplay that fans remembered. Now with Deception IV: The Nightmare Princess offering new content on top of what was already included in Blood Ties, should fans step into the trap filled dungeons once again?

Story
Deception IV: The Nightmare Princess includes not only the original storyline following Laegrinna, the daughter of the devil, as she is assisted by three demons who work with her father in order to revive the devil by collecting Holy Verses that have been passed down for generations by the heroes that originally sealed him but also a hundred new quests that follow another princess named Velguirie. 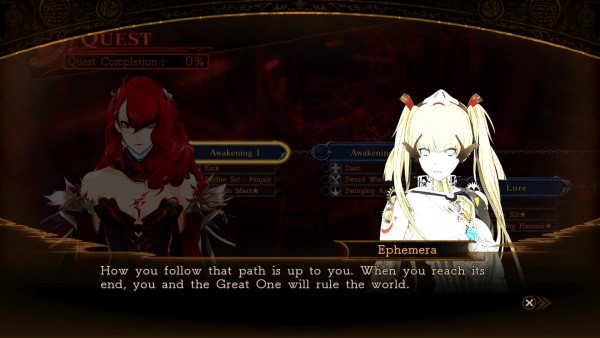 Unlike Laegrinna, Velguirie has a number of unique powers as she is capable of haunting the nightmares of humanity allowing her to torture them in their dreams. With a sadistic personality, Velguirie is capable of attacking opponents with kicks to set them up for the disastrous traps that lay in wait. She is assisted by an automaton named Ephemera who assists Velguirie in restoring her lost powers as well as reviving the devil, even if it means she must defeat Laegrinna and others from the past to do so. 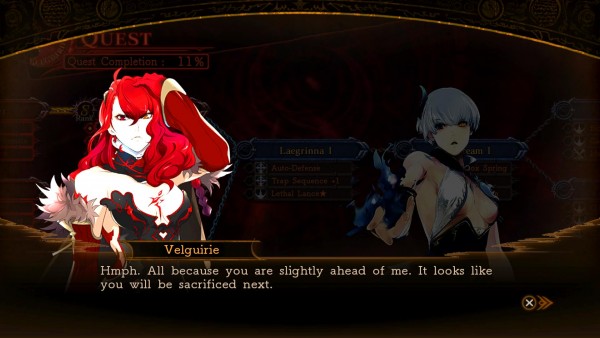 While this means that there is still an issue with there not being too much of a set-up for the actual storylines in Deception IV, both Blood Ties’ story and The Nightmare Princess’ quests hold up well enough on their own even if it happens to be your second time heading through Laegrinna’s storyline since there are many different ways it can play out while Velguirie feels like a fleshed out story that manages to hold together well despite the odd decision to relegate her storyline to the quest mode.

Gameplay
The real core experience for Deception IV: The Nightmare Princess remains the same as what was found in the original game and you can read all about that in our original review. As a brief summary however, players find themselves facing off against a number of opponents in stages where they must use traps that they have cleverly laid out in order to kill all enemies.

The new twist with The Nightmare Princess is that Velguirie can do something that no protagonist could ever do in a Deception game, she can physically attack enemies. Of course this doesn’t mean that she can simply kick an enemy to pieces but by utilizing a well-timed kick (which is limited by a recharge meter) Velguirie can temporarily stun an enemy and make them stagger backwards into an area that may have a trap waiting to be activated by the player. Of course if you’re feeling extra sadistic you can also stomp on downed foes for a bit of a coup de grâce if they are on the verge of defeat or just got put through the ringer of a ridiculously long trap chain. 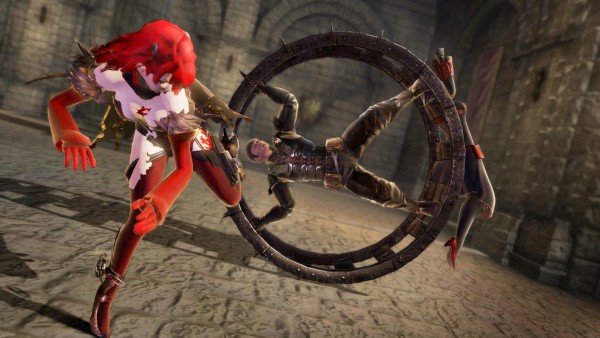 While Deception IV already had more traps than you could ever think to try out and combine with the various stage traps, The Nightmare Princess adds even more to that number though it is worth noting that most of these special traps require the player to unlock them via the 100 mission long quest mode. Of course once a number of these traps have been unlocked, the only limitation to what you want to actually do with them is your imagination (and the number of traps that you can use at any given time which must be increased by completing the aforementioned story modes) as your foes’ demise can be as gruesome or hilarious as you want it to be, especially with a new customization option.

As mentioned before, this serves as Velguirie’s storyline and while every quest requires the player to usually defeat every enemy, there are also additional challenges that range from finishing off an enemy with a certain trap, hitting a high trap combo, or at least utilizing a certain trap in said combo. By completing these side-objectives not only are enhanced versions of already unlocked traps unlocked but so are new traps as well as new customization pieces. 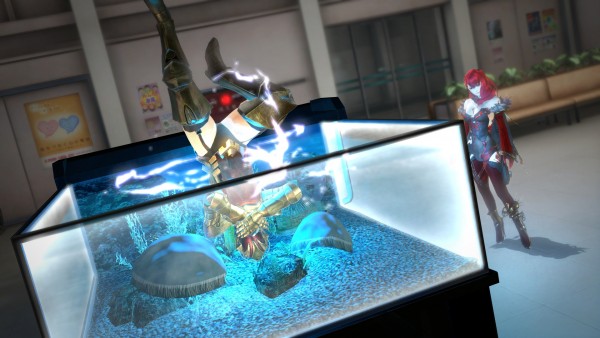 Alongside offering the new storyline quest mode, The Nightmare Princess also includes the addition of Studio mode. Studio mode allows players to not only craft their own victims by creating enemies that can be customized using various pieces that can be unlocked in the aforementioned quest mode but also given specific weaknesses and strengths. These opponents can then be placed in pre-existing stages for players to run through any different number of fun scenarios to see how things will play out. These scenarios can then be uploaded for the community to play and it is entirely possible to download other player created stages to see if you can manage to tackle the challenges they have placed before you. 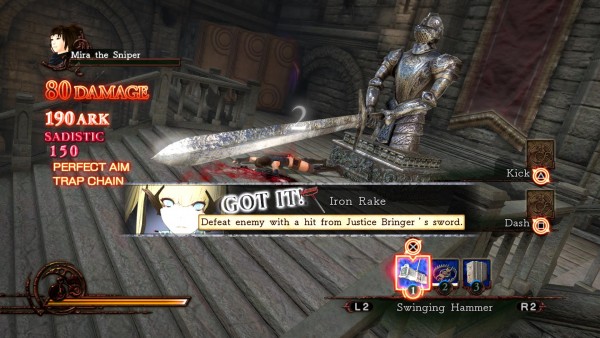 That being said, while the new story following Velguirie is enjoyable and the addition of even more traps to utilize is a great addition, those who have already picked up Blood Ties may find it hard to pick up an entirely new version of the game only for the aforementioned additions. Those who never picked up Deception IV obviously won’t find issue here but those looking for a simple upgrade may not be satisfied with everything on offer in The Nightmare Princess.

Visuals & Audio
By being released on the PlayStation 4 Deception IV: The Nightmare Princess actually hasn’t been given too much of a graphical overhaul. The character models do look a bit better than before (with fan-service breaking clothing still included) but unfortunately most of the already included stages look the same as before. Thankfully a number of modern stages and traps have been added into the game to spice things up a bit and move away from the medieval aesthetic that may have been dragging on players for a bit too long.

This means that characters wearing gym uniforms can be subjected to both medieval traps as well as modern day ones such as toilet geysers, flying soccer balls, out of control playground and exercise equipment, and more especially since their outfits can now be changed to fit whatever theme feels right in the Studio mode. 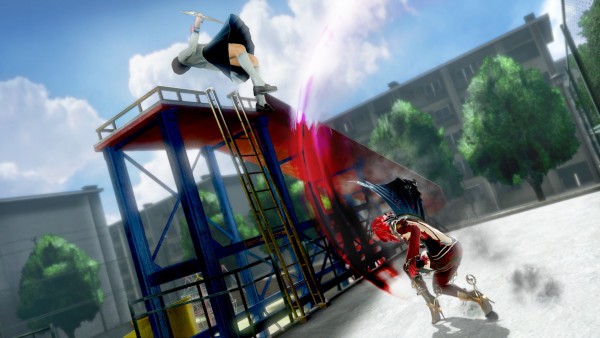 As with the original release, Deception IV: The Nightmare Princess does not feature an English voice track and has retained the original Japanese dub. This isn’t an issue however as Koei Tecmo has provided proper English subtitles for every bit of spoken text in the game, including the oft hilarious introduction and dying speeches given by your victims while the Japanese voice actresses and actors have done a great job fitting into their sadistic sounding roles.

Overall
Deception IV: The Nightmare Princess serves as a great addition to the franchise by not only upgrading the title to the PlayStation 4 but also offering a bunch of new content to attract newcomers. Unfortunately the move to the PlayStation 4 does very little to upgrade the original graphics found in Blood Ties and those looking to upgrade may find the new content a bit lacking. Nonetheless I found Velguirie a worthy addition to the game and with plenty of new traps to utilize, new modern stages to spice things up, and plenty of content to unlock for the Studio, Deception IV: The Nightmare Princess is definitely worth it for fans looking for more great content with a bit of extra polish.