Death Track is another endless running title from a small developer. While these types of games are super popular lately and kind of done to death, I must admit a small smile coms to my face each time, curious to see how the developer plans on making their title stand out from the rest. While many of these titles offer little-to-no originality, Death Track grabs the gamer’s attention with pretty visuals and a futuristic setting. Spoiler alert: Death Track will most likely fail to hold your attention for long. While Death Track may not be the blockbuster title of the century, Avko Labs displays immense promise with this title and it could very well be a stepping stone towards something great in the future. 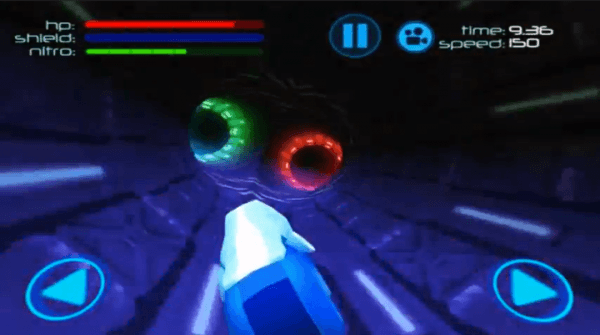 Death Track’s gameplay will be quite familiar to fans of endless runners: you control a vehicle which is constantly moving by itself while you dodge obstacles in your path, racking up as many points as possible so you can purchase upgrades to help you beat your high score and so forth. This rinse and repeat formula may be nothing new, but Avko Labs keeps it fresh with a nice futuristic “tube-ish” atmosphere and really succeeds at making the player feel like they’re moving fast. This adrenaline rush with the combination of pretty visuals makes gameplay worth while. However while the speed is done greatly, it can also be hard to handle at times and maintaining control can be a problem. Controls aren’t terrible for the most part however, and the added option of tilt or touch controls before each race is also a nice touch.The need for speed is also emphasised by putting a focus on a time trial style of play, where you must reach the goal of each level by a particular time. If you fail, the doors to the exit close. The level will continue however, but you probably won’t realise until you hit a dead end wall and explode at the end.

Another nice touch is the variety of upgrades and power ups in Death Track, as options such as Ghost (which allows you to pass through obstacles), Slow Motion (you get the idea) and Flashbacks (think of it as a rewind button) are unique as they are helpful. The major flaw of the game however is a brutal and fatal one, and that is level design. Unlike most games of the genre, Death Track has designed levels rather than randomly generated ones. You’d think this would be a good thing but the design makes for really tough gameplay, expecting players  to make really fast decisions from the get-go. So ultimately the key to winning isn’t awesome reflexes like it should be, but instead memorizing the layout of each coarse. For the most part, most levels feel impossible to get though without buying power ups or upgrades which requires either grinding or making in-game purchases and let’s face it – that’s not fun for anybody. On top of that, there are very little features outside the annoying single player campaign to convince gamers to stick around, so it’s very easy to lose interest in Death Track. 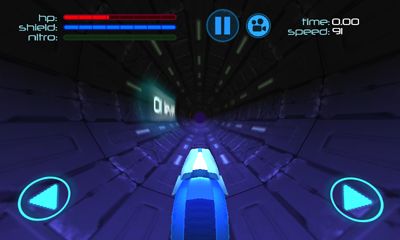 If Death Track has anything good going for it, it’s not the tracks you race on but the tracks you jam to. While not flawless, Death Track’s soundtrack contains catchy techno/dance inspired beats that’ll have your head nodding in no time. The graphics are on a similar note, with Tron-inspired visuals and a very F-Zero-ish atmosphere, there’s nothing to not love in visual terms. Death Track has it’s presentation looking and sounding swell, it’s just unfortunate that the gameplay isn’t as spot on as it’s presentation. 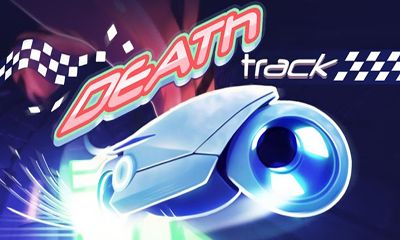 Death Track has the foundations of a good game but a few gameplay flaws hold it back. It has fantastic presentation, an exciting atmosphere and simple controls but it’s frustrating level design accompanied by the fact there’s little else to keep you around dramatically stop it from achieving much. With that being said however, it still could appeal to some gamers.