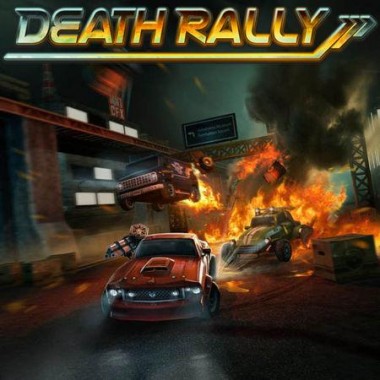 Save an additional 15% by purchasing the title before August 17th!

Overview
Revamped in March 2011, Death Rally has already made a tremendous impact on mobile device platforms. Remedy Entertainment even can boast Road Rally for being the #1 universal app for iPhone in 46 countries as well as for iPad in 90 countries. Now this explosive vehicle has been ported to the Steam environment and has expanded for success on the PC driven market.

Story
Apparently the main character has been speeding and involved in some reckless driving adding up to countless felonies. A brigade of police are hot on his tail as the player is thrown directly in the mix. Thinking that there is some way out, I drove away in my red Shrieker only to be shot down by the cavalry. Even shooting the your way out won’t get you out of this mess. Emerging from the pile of metal that was a nice Shrieker, the renegade is taken into custody. Now the police chief, Tex Harris, is talking about forcing him into Death Rally to bring out “The Adversary”. Jail time or Death Rally… 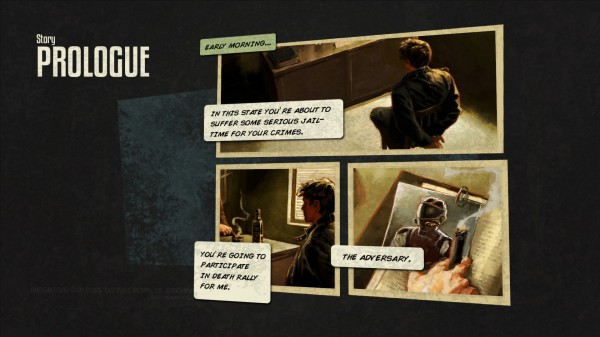 The story is fairly simple and continues with the officer getting upset that you haven’t brought in “The Adversary” yet. Only a few races are designed specifically for the story while regular matches will be completed to gain enough fame for the next story piece. Races will take over the forefront while the story resonates behind the scenes.

Gameplay
Unlike other games where you enjoy easy courses and build up your morale, Death Rally really socks it to you from the get go. You are forced to learn driving mechanics and understand that you might have to lose some races to get better. However, getting second or third place can be very enjoyable if you are able to destroy your opponents in the process.

Controls can be confusing at times depending on the view you want to be accustomed to. There are two perspectives – a following camera versus a top-down view. While using the following camera, the arrow directional keys make sense as left and right movements are sensibly correct. However, in the top-down mode you are not following behind your vehicle, so making quick turns might make you second guess what directional to press. On the other hand, the following camera shifts the view quite a bit as you are moving with the camera creating a potential dizziness effect. Testing both views out will garner which mode will fit your playing style the best as both views have advantages and disadvantages. I would personally choose to take the regular top-down view as you can see more of the map and anticipate crates to run into. 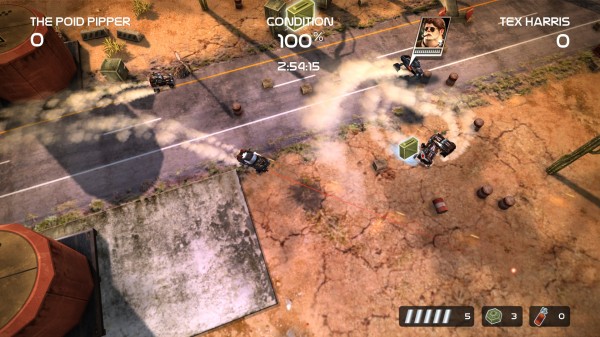 As the directional keys control movement, there are keys that cause some mischief for other players. Keys (Z) and (X) are default commands for mines and weapons. Mines cannot be used right away because you will need to collect item blueprints during racing matches in order to build the item – this is also true for new vehicles and weapons. One the blueprints for mines have been collect you will be able to drop three mines during any match as long as they are selected in your main inventory.

Weapons can be attached to any of your vehicles while in the selection menu. You first begin with only a shotgun attachment that allows minimal shots during a race but can be reloaded by ammo pick-ups from miscellaneous crates and dead enemies. In order to use the weapon during the race, simply aim by driving your vehicle near an opponent and hit (X) to fire. The shotgun had a bullet spray that can hit additional opponents while a weapon like the sniper rifle will hit only one for more damage. Weapons can additionally be upgrades by points gained during a match.

Each vehicle has its own stats known as badges and can be upgraded to a limited degree. The badges are separated into five contributing areas: vehicle condition, speed, handling, armor, and weapon upgrade. The most important area to always maintain on each race is vehicle condition. During a race or battle, your car may experience some wear and sometimes even explode. You will need to spend points on your vehicle’s condition badge in order to repair that damage dealt to you in previous matches. Thus, being killed during a match can become quite costly as well as deterring you from spending points on vehicle upgrades.

Speed, handling, and armor help define what matters more to you as the player. Speed will definitely help you win some races, but being fast isn’t always a saving grace. Armor comes in handy when you have close encounters that deliver crushing blows by flamethrower or even missiles. Not enough armor means “Bye, Bye, Chump!” Handling is the oddball out of the group and overlooked quite often. When discussing vehicle speed and NOS boosts during races, handling becomes important to make quick turns to edge off opponents. The customization of each vehicle stats ends when they are fully upgraded and considered a “GOLD” vehicle. Nothing too special other than just being upgraded to the max. 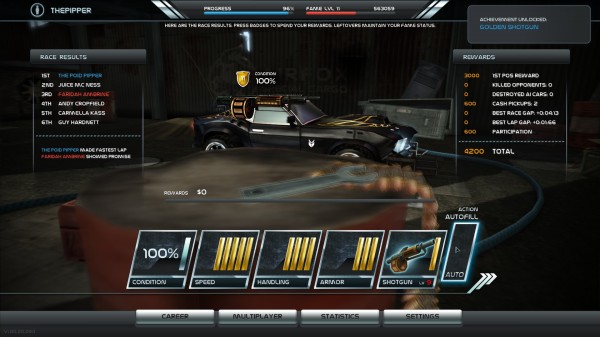 On to the races! On the bottom of the race selection screen, you can switch between story and match mode. The storyline will become updated once you hit milestones through your races. For instance if you attained enough fame, the adversary may become interested in your forthcoming as a death dealer of racing. As the story develops you will have to beat certain races in order to advance to the next step. Eventually, the adversary himself would like to challenge you.

The regular match selection screen will compromise of several stages that will randomly be customized by racing type. Most matches will be normal races where the first to cross the finish line wins. However, other races will be customized by the following: dollar race, single lap, specific weapon, and death matches. All of the customized races still require a single player to finish but adds limiting rules to enhance the fun. A match with “Gatling Guns” only attaches this weapon to each vehicle in the race while removing your previously attached weapon. This could be a good way to test out a new weapon you have not acquired blueprints for.

Beyond the type and location of the race is the difficulty. While playing offline, each match is labeled beginner, easy, medium, hard, or extreme. I find this difficulty setting quite useful when trying out new vehicles and weapons. For instance, you would not simply jump into an extreme difficulty race with a vehicle that you have just unlocked. Well, maybe you would but prepare to only acquire a point bonus of 600 for merely participating. Working your way up from beginner again will prove useful for any newly unlocked vehicle. If you can purely win on instincts and mines, try a new weapon on harder difficulties because the bonuses will be greater and level the weapon up faster.

A shadowman may speak with you before races begin to prompt you with an advantage for the upcoming race. This shadowman will offer a chance to try a “Gold” vehicle or weapon for half of your earnings during a race or even sabotage a random person in your race for a minimal fee. Additionally, the shadowman may offer to double your reward if you are able to kill a boss during a race. Therefore, killing and not necessarily winning can have its own advantages. 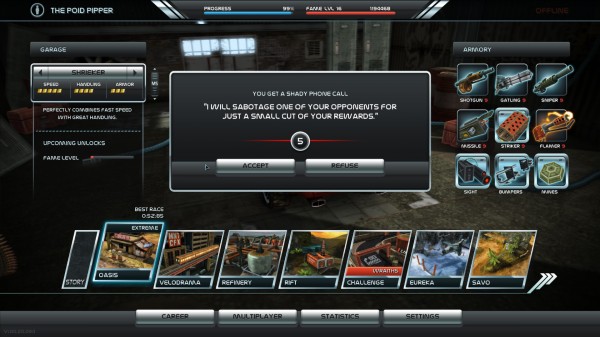 Every race has a boss that can prove to be a tough foe to beat. These bosses normally have a faster vehicle and have better luck maneuvering around mines. Beating bosses during the match will provide an additional point bonus and if destroyed unlock an achievement. In order to defeat these hardened foes, you will have to combine speed boosts with consistent attacks to slow them down.

Initially, all of the races begin offline. By going into the multiplayer menu, you can switch to battle online opponents and even create your own private channel for friends to join. Upon switching all of the difficulty settings will be erased and all matches will search for online opponents. The only problem here is that the community of players is lacking. When trying to play online at varying times of the day, often I would experience “no players found” or “please quit and try again”. I did manage to play the same opponent three times in a row during one session which was quite enjoyable. After players get skilled enough in the story mode and offline races, they will have no problems taking on online opponents. As more people become involved in the online races, the experience will become more enjoyable for those that have reached 99% completion – like me. How else will I be able to unlock the 100 online wins achievement?

Visual / Audio
Vehicle customization has been given a lot of thought as you can tell already by individual stats. Well, to make the game more visually appealing the developers instilled different vehicle skins like the Sentinel’s unicorn design for players to choose from right away. Sadly, this is where the customization ends with the paint job. More unlockables by achievements or for fame completions would make take customization to the next level and provide a deeper experience for players. Even decals earned by destroying specific opponents could interesting. 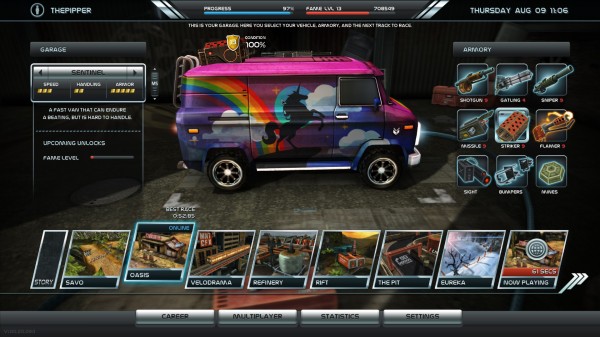 A combination of sound effects and graphics provides an enjoyable gameplay experience when decimating foes. Being able to see the destruction as it unleashes is the key importance. Whether you are launching rockets or locking on by aiming with your sniper rifle, you can sense the heat of the moment. 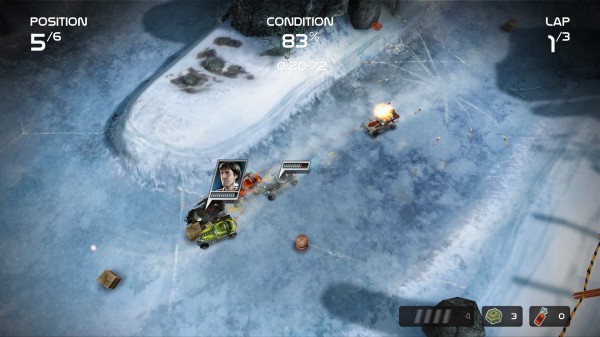 User interface has a clean design and is easy to maneuver around. As soon as you enter your profile, you are able to quickly change the design of your car or jump into a race. Additional menu options are visible at the bottom of the screen adding to the clean feel.

Overall
What you will experience in the end is a classy racing shoot ’em up game. Death Rally creates an addictive atmosphere that you will be choosing your best fit vehicle, weapons, and races to cremate your foes. Like me, you will be excited to see your fame meter climb after each race reaching closer to that “God” title – or perhaps further.

Death Rally is lacking in an extensive multiplayer experience concerning its community. At this time the community is simply not there for intense online interaction. However, partnering up with players on a private channel could prove interesting and quite deadly.

Even though the story mode is incorporated alongside racing matches, the game can be completed within a single sitting – energy drink and hot pockets on standby. Death Rally delivers a hardcore vehicle blasting experience that doesn’t take gamers likely from the beginning. If you cannot stand losing at the beginning, I guess you are not cut out for death dealing.