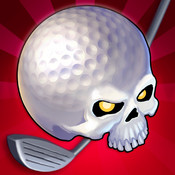 Let’s face it – golf sucks and it’s mainly for old people. So it’s no surprise that most golf games tend to emulate that same feeling. However in the world of video games, golf has had many bells and whistles added to it to spice things up, from iconic characters like Super Mario to outlaws making it seem more badass. With this in mind, finding a game titled Death Golf was simply inevitable. So imagine my surprise when I found out that Death Golf is far from being generic. Instead, it sports interesting and creative ideas blending the sport with genres like platformers and puzzlers to keep things fresh. But Death Golf is no saviour to the sport, as quite a few hiccups do drag it down. Still, this unique concept may win over a few gamers, as it certainly is original. 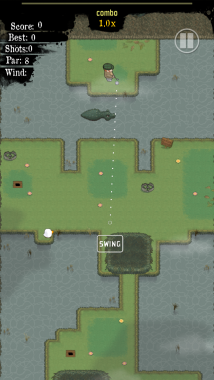 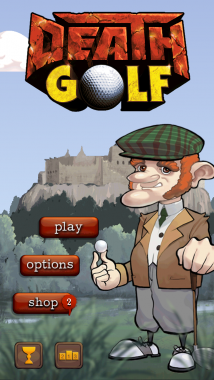 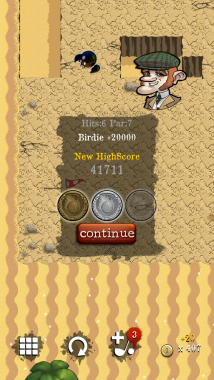 The concept of Death Golf is as simple as it is unique. Players take control of a charming Irish man as he plays golf on several different courses trying to grab a high score. The catch is that various creatures and obstacles wish to stop him from doing so and aren’t afraid to kill him in the process. So unlike most golf games when players spend most of the time striking a ball, the game focuses more on walking towards your next shot, jumping over obstacles and fighting off opponents. With enemies, themed levels, power ups, upgrades and more, describing Death Golffeels a lot like describing a platformer, which is what is really is at heart. It’s no simulation of the sport or a golf game, but rather a golf-themed platformer.

However when it comes to the charm of Death Golf’s gameplay it all ends at the concept for the most part as execution leaves a lot too be desired thanks to troublesome controls. Firstly to travel players just touch the screen with no on-screen joystick, which can be awkward on some occasions, blocking the view of certain objects. Jumping over obstacles is automatic (think Legend of Zelda styled jumping) but judging distance and how far the character will jump is always unreliable, killing the player more times than it should. Death Golf’s deal breaker though is having the same function for too many actions. To attack enemies with your club, move and swing at the ball is all by touching the screen, and at times the game won’t know what to do. Sometimes you’ll try to attack a killer duck or demon, and instead you end up running into the creature head-first. Sure the controls aren’t broken, but they are frustrating. Thankfully, the game is a little forgiving, allowing you to stop swinging at the ball when under attack and giving you infinite lives. But with infinite lives the value of your character’s life is non-existent and ultimately makes you care less for victory. Another frustrating aspect is to complete a level you need to reach a certain score, not just get the ball in the hole and many times you end up failing to get that score because the clunky controls have killed you to many times when they shouldn’t have. Sure there are some nice touches to Death Golf such as upgrades & combos, but that isn’t exactly going to matter if the gameplay is so annoying. 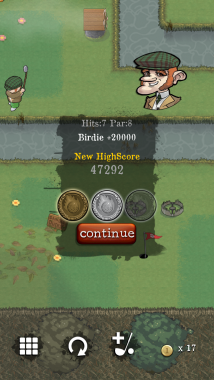 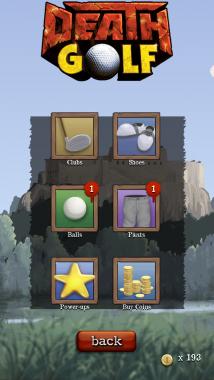 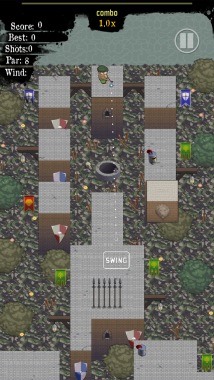 In terms of graphics, Death Golf is less disappointing. While character designs and course themes are generic, they do the job well and are presented nicely. Graphics are colorful and vibrant, as they should. Nothing here is revolutionary, but they don’t have to be. Much like the game’s concept, they’re simple and that’s good enough. Audio on the other hand is a mixed batch. While the music complements the graphics in terms of simplicity, sound effects feel rough and at times out of place. Sometimes the character will cheer in a poorly recorded manner that to put it nicely is ear-bursting. While some sound effects do sit in well, these occasional off-putting sound effects are tolerable and forgivable, but annoying. 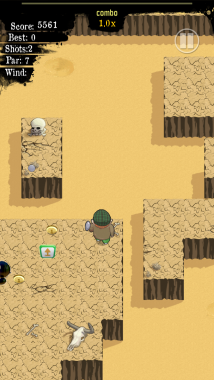 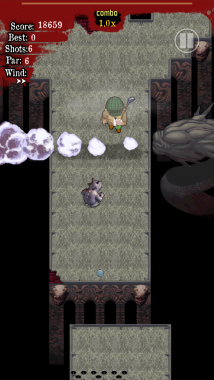 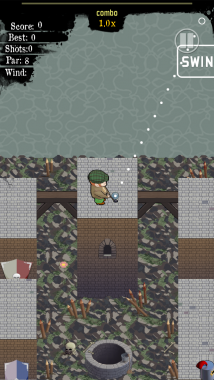 To put it bluntly, Death Golf sits in an awkward position. It’s a unique and fresh idea that could work if executed correctly, but doesn’t even come close to reaching it’s full potential. However, this could all change with a few minor updates and some added content. With tighter controls and some polish, Death Golf could be something special. Until then however, it stands as a chore to play. Keep an eye on this game though, as it could be something more in the future with a bit of work.