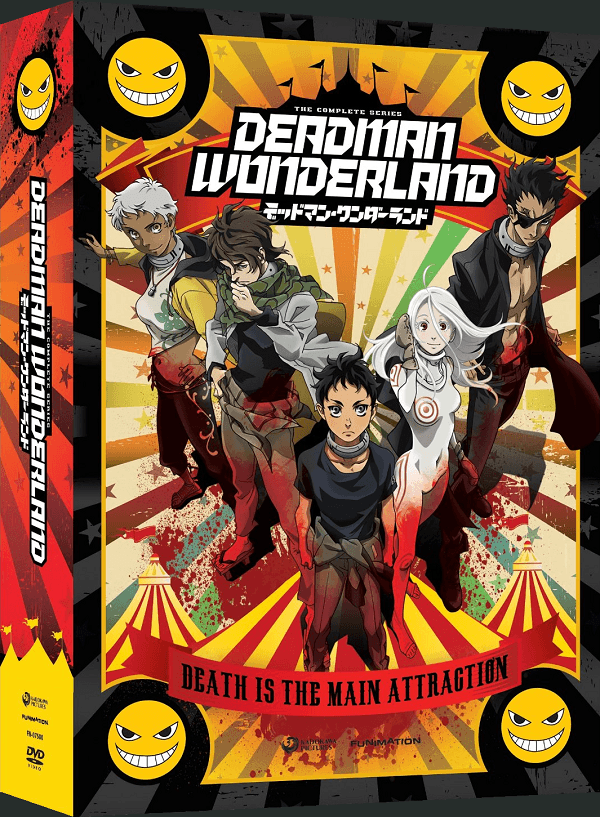 Overview:
For quite some time now, watching an anime on television without purchasing any special channel or the complete series has been something of a dream. In fact, many anime fans would be hard pressed to find any show created within the last seven years on television. However that all changed when Toonami came back on the air in North America and one show debuted as its hit program. That show happened to be Deadman Wonderland.

Originally created back in 2007 as a manga, the series was given its first anime adaptation in the middle of 2011. Now that this rather gruesome show has finished airing on television however, FUNimation has seen fit to release the complete series in all its uncensored glory with a slew of extras. However, is Deadman Wonderland worth visiting?

Story:
Ten years after a massive earthquake occurred in Tokyo, we follow a normal middle school boy called Ganta Igarashi as he goes to class with his friends like any other day. However his happy life is interrupted when a strange person in strange armor and a crimson cape appears outside of his classroom window. This “Red Man” as it is called suddenly bursts into the room and slaughters the entire class, brutally ripping apart every one of Ganta’s friends and classmates. 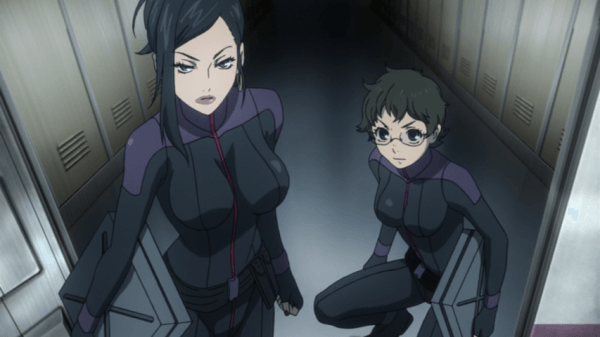 However rather than killing Ganta, the Red Man plants a red crystal in his chest, forcing the youth to pass out. In the days following the massacre, Ganta is blamed for the mass murder of his classmates and he is quickly sentenced to death row after a mysteriously unfair trial. Unfortunately for Ganta, a special prison has been created in Tokyo to hold every criminal possible. A prison called Deadman Wonderland. 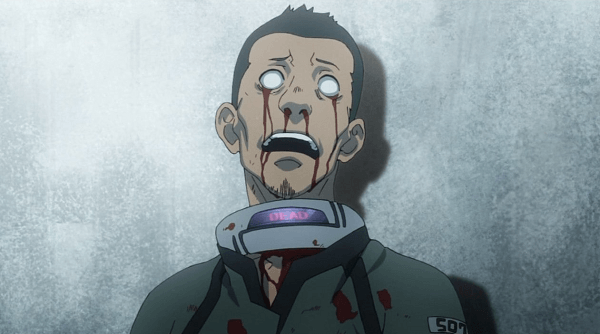 After being thrown into this hellish prison, Ganta must not only survive a place where the worst criminals in the nation have been placed, but also the horrible plans of the powers that run the prison which have quickly taken an interest in the young man. While Ganta quickly finds a strange and childish friend who is as mysterious as she is skilled, he is quickly thrown into a realm of avarice and murder. With a mysterious power dwelling rising within him, death around every corner and mysterious machinations in the works, can Ganta stay alive long enough to confront the Red Man? Or are more sinister things in store for this young man once he discovers the truth of Deadman Wonderland?

Deadman Wonderland forgoes long build-ups to events and quickly throws the viewer right into the thick of things by immediately presenting a brutal scenario and escalating it further as each episode progresses. Rather than focus on building up characters, Deadman Wonderland provides a story driven plot with Ganta and the side characters mostly reacting to the events occurring around them. 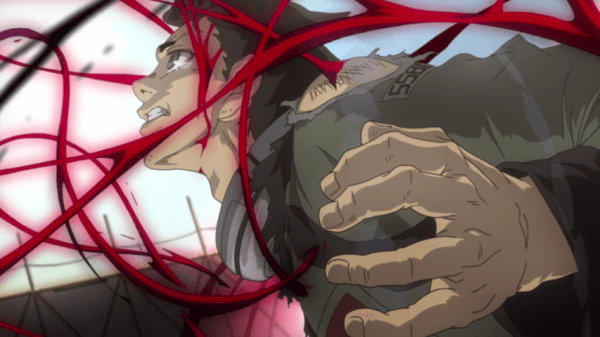 Unfortunately, this only works partially thanks to the fact that the main characters themselves are rather lackluster or given little explanation or backstory. Outside of Ganta and his slow growth from a whining boy to one that will stop at nothing to try and protect his friends, the rest of the cast is given barely any character development in the slightest. Instead, the few side-characters that do receive focus are given a few flashbacks here and there to their past lives and what landed them in Deadman Wonderland.

While some growth is hinted at, most side-characters play only a small part the story as a whole, often vanishing for a number episodes inexplicably. It is worth noting that Deadman Wonderland does redeem itself by providing plenty of mystery with its storyline and offering a slow build up to each truth that is revealed. 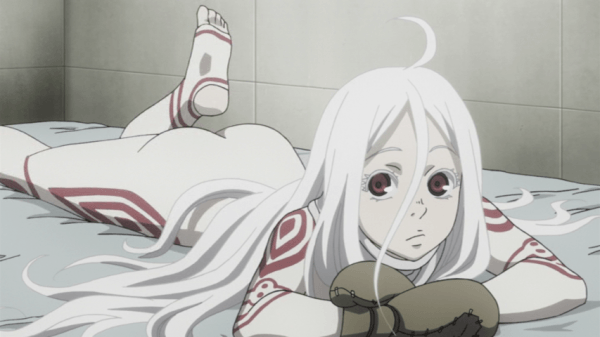 It is worth noting that Deadman Wonderland was adapted from an ongoing manga, so there are still plenty of unanswered questions left for the viewer by the time the last episode finishes. This does leave the ending open for another adaptation but also will leave the viewer feeling dissatisfied with the amount of mysteries still unanswered.

Visuals:
While this release of Deadman Wonderland is the fully uncensored version of the show, there are still a few segments of gore that are blacked out simply due to the grotesque nature of the wounds, limb tearing, decapitations and more that sometimes occur within Deadman Wonderland. The series itself is horrifically bloody and most of the death is uncensored, including people being sliced into pieces, electrified to death and more. 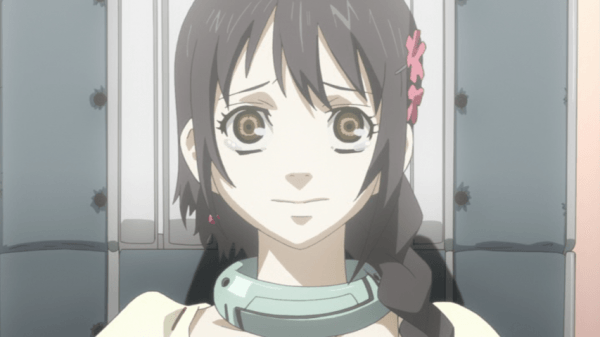 Outside of that, the series implements some nice visual effects throughout most of the combat sequences, especially when you consider the fact that nearly all battles in Deadman Wonderland are fought with the most unorthodox weapon imaginable. That being said, there are a few drops in animation quality here and there, though these instances are rare amidst the rather impressive character designs that Deadman Wonderland sports.

Audio:
Considering this is the DVD release of the show, viewers can expect the standard Japanese voice track and the English voice track available for Deadman Wonderland. The English cast handles their rolls amazingly well for a series as brutal and violent as this one is. In fact, the high level of swearing and terrible imagery works best with the English cast taking the lead. As such, Minatsuki’s voice actress Leah Clark deserves a special mention for making the character sound truly psychotic while Monica Rial’s Shiro captures her childish nature perfectly. 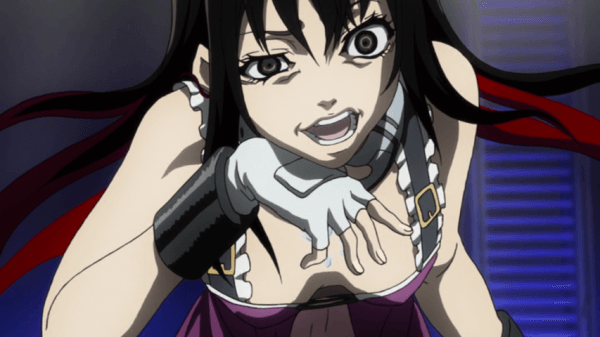 As far as background music goes, Deadman Wonderland does a great job by offering a wide range of tracks that range from simple to heavy metal depending on the scene. As far as the opening and ending songs are concerned, it is interesting to note that the opening “One Reason” by DWB is actually completely in English and set to a heavy metal beat. The fact that the song is in English is certainly a nice treat, while the ending song “Shiny Shiny” by Nirgilis is in Japanese and very soft in tone, which manages to match the ending sequence perfectly.

Extras:
With Deadman Wonderland’s release on DVD we have been given a disc full of extra features as well as a few bonus commentaries on the episodes themselves. On the bonus disc viewers will find a clean version of the ending song as well as two clean versions of the opening song, one shown on TV and another the “Director’s Version” which features some nudity compared to the original. Also on this disc are the original commercials and promo videos, as well as something I’ve never seen before in a FUNimation release. 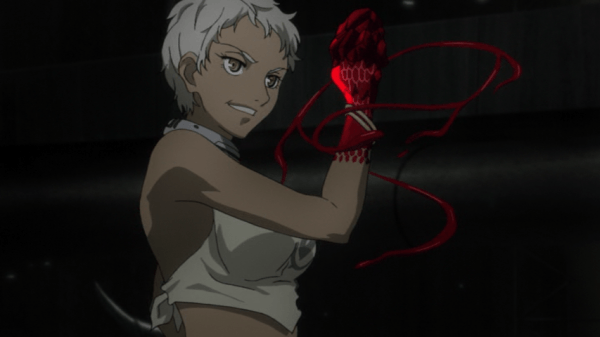 While there are two basic audio commentaries which I shall address momentarily, there is also an actual video commentary by the English cast where viewers are able to watch all of the voice actors as they record the commentary, with the episode itself shown in the bottom corner. This video commentary is for Episode 7 and is hosted by Joann Donald and he is joined by Greg Ayres the voice of Ganta, Monica Rial the voice of Shiro and Leah Clark the voice of Minatsuki.

This video commentary is something completely different from any standard extra and I would love to see something similar done in future releases as it is quite a treat. Especially when you consider most people probably have no idea what these voice actors look like. They discuss various things about the show such as their favorite worst lines in the show, their surprises with the show and they also discuss various spoilers about the show and the characters themselves. 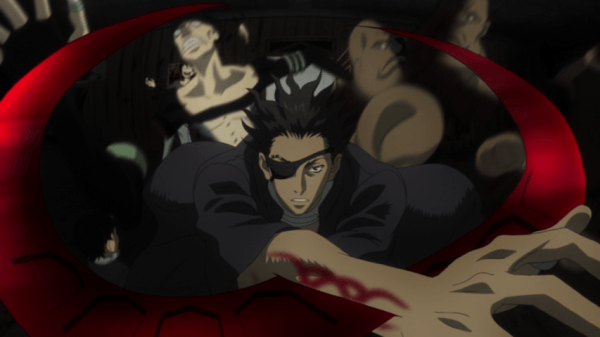 Outside of the video commentary there are also the two standard commentaries for Episode 6 and 8. Episode 6’s commentary sees the return of Leah Clark and this time around Aaron Dismuke, the voice of Yoh, joins her. They discuss how gruesome the show is, their roles in the show and provide some hilarious narration of the show as they discuss what is happening on screen. There also happens to be a commentary for Episode 12, the final episode, featuring Monica Rial and Greg Ayres providing commentary while discussing their characters and some of their past works.

Overall:
Deadman Wonderland is a series that is almost tailor made for a Western audience as it not only features high levels of violence and action, but also the English cast has done an excellent job voicing the characters and putting emotion into them and the special video commentary is an unexpected treat.  While the story does leave something to be desired, Deadman Wonderland is a gory action packed series with plenty of mystery that takes the viewer for quite a ride.