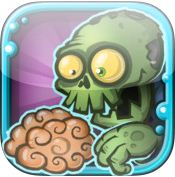 When it comes to zombies in any form I personally believe this world to already be infected. Not that there are any actual zombies limping and moaning through our cities, no, I’m talking about the influx of zombie-related media within the past year or so. Zombie movies, zombie TV shows, zombie games, the world is already overrun with the walking dead so what do we exactly have to fear anymore?

Zombies have now become a media “crutch” in my opinion and it takes a certain twist of this overly simple concept to allow certain video games or films of any kind to stand out, this brings me to my next point: “Deadlings” is a mobile title that mixes elements of puzzlers and platformers to create an odd but (hopefully) enjoyable gaming experience for fans of those genres and fans of zombies alike. Thanks to Nimbi Studios and Artifex Mundi, I’ve been given the chance to review “Deadlings”. Let’s see just how well it does. 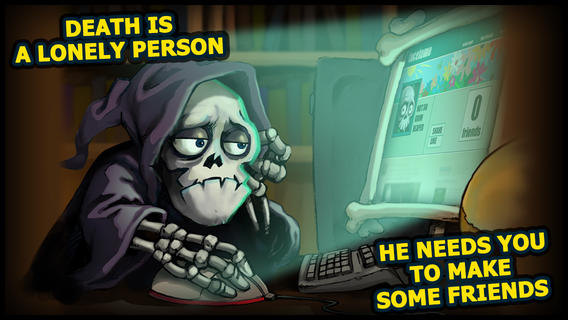 “Deadlings” is the type of game where you could entirely ignore the storyline and still gain just as much enjoyment out of it than if you HAD paid any attention but I, for one, actually found the story to be quite quirky and different so I can’t just sit back and skip over it. You play as Death. Yes, you play as the Grim Reaper and lately you’ve noticed that people no longer fear zombies, they’re no longer being killed by zombies and you’re feeling…well, lonely. You decide to pick up your game, to start killing again in a more efficient way…that’s where the “Deadlings” come in. You (as the Grim Reaper) open up a testing facility where you bring in expandable minions (the “Deadlings”), experiment on them and test out their new powers or abilities.

Your plans are to, one day soon, complete all your experiments and release this new scourge of brain-eaters upon the Earth. What I enjoyed about the story was that it wasn’t typical, it was something fresh and new. It doesn’t really come up that often throughout the game though so, as I said earlier, it can be overlooked easily without any real repercussions. Players who don’t exactly care for story can stay in blissful ignorance of it for pretty much the whole game if that’s what they choose. Me, on the other hand, I enjoy any game that is driven by story, even small ones and “Deadlings” gives players enough story to understand exactly what they’re doing within the game without overwhelming them. 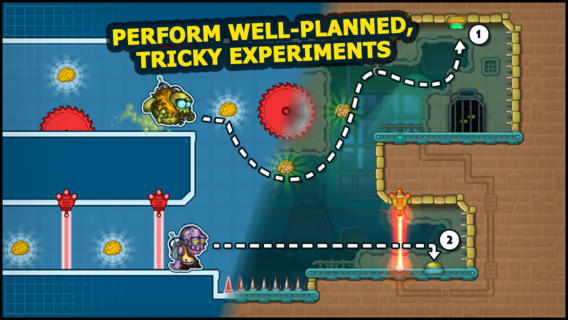 This game stands somewhere in between the puzzle and platforming genres, it is fairly hard to pin it entirely to either one of those two.  As Death you are tasked with manoeuvring these minions through different levels filled with obstacles to overcome and brains to collect along the way. As you play through the game you unlock different zombie minions to use within levels, each of these zombie minions have different specifications; one simply runs and jumps, one sticks to surfaces, one can fly using flatulence, etc. You must simply get ONE of these zombies to the exit portal to complete a level, although it seems like a pretty easy task it can sometimes prove to be quite difficult.

The puzzle aspect of the game is seen when first previewing a level, something you do before deploying a “Deadling”. You scope out the level, its obstacles and the location of the brains that must be collected. Once you’ve determined your strategy you deploy the individual zombies (one at a time) and make your way through the level all the way to the exit. The platforming element is shown once you’ve deployed a “Deadling”: Now you’re tasked with actually controlling the minions. Most move on their own but need you to tell them when to jump, fly, and so on.

There’s other helpful elements to the game like an option to revive a dead zombie or to destroy certain obstacles but they cost in-game currency (not real money) and the ratio of money earned to money asked is not quite good. I played almost ten levels before I decided to use these “helpful” elements and, within a couple uses, I was completely out of money BUT you can buy in-game currency with real-life currency if you so wish to.

For the most part, the way “Deadlings” plays is great; it gives players a chance to think about what they are to do next but also enjoy that slight frustration that comes with playing a platformer. The unfortunate part of the way “Deadlings” plays is that it isn’t too accessible to every kind of player. It’s not as easy to pick up and play as other puzzlers only because it requires a great deal of concentration and a fair bit of thought. This game is definitely for people who have a little bit of time on their hands because some levels will force you to think long and hard before deciding to deploy a “Deadling”. If you’re in need for a quick puzzle game you can play anytime/anywhere this may not be the one for you. 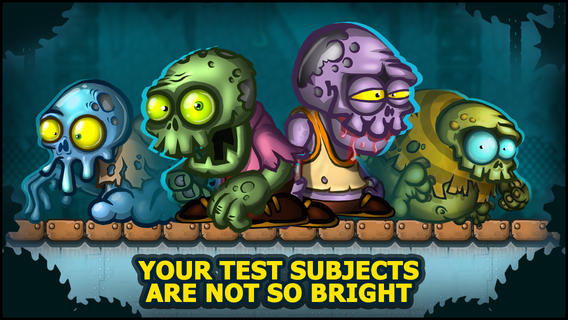 If you’re a fan of old-school cartoons, I can imagine you’d be quite into the visual style of “Deadlings”. Much like its mix of gameplay genres, this game also mixes aesthetic styles. It goes from being crisp and clear to being grotesque and dirty-looking, both have been designed that way on purpose and it gives a nice comparison between looking at something as nice as well-constructed blueprint and looking at something as disgusting as the rotting flesh of a cartoon zombie.

Overall this game looks great but you’ll definitely notice that certain key visual sequences will look to have a lower resolution than the rest of the game and, while that’s not TOO big of a deal, it is noticeable to a high degree and something I simply couldn’t look past. Though I’m not too much of a fan of the animation style, I do have to say it was done extremely well. Everything was fluid in motion and the whole game just kind of flowed well so no complains there. As I mentioned: If you’re a fan of old-school cartoons, you’ll absolutely like the visual style of “Deadlings”. 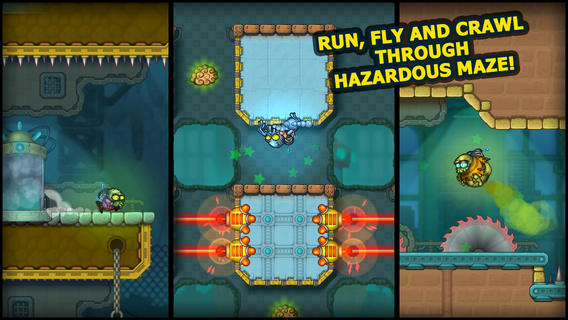 Much like the games visual style, auditorily it is very reminiscent of some older cartoons. The thing it DOESN’T do is try to be creepy, it only attempts to be as quirky as possible and it does that extremely well. The soundtrack is actually quite funky at times but it’s mostly very “tip-toey”, most of the tracks are made up by high-pitched tones and then a booming baseline, it fits the overall vibe of the game so well but unfortunetely its so damn hard to explain perfectly.

Those of you who have played the game “Plants Vs Zombies” will notice that the soundtrack for “Deadlings” is quite similar musically, it uses instruments like electric guitars, electric drums and sometimes you’ll even catch a theremin here and there. For those of you who don’t know what a theremin is, please go and look it up, you will NOT be disappointed. The game tries to be creepy ina  very fun-loving way and you can absolutely get a feel for it. Every element of the game has its own sound effect, from the giant buzzsaws to the farting zombie and they’re all done fairly well. No complaints here. 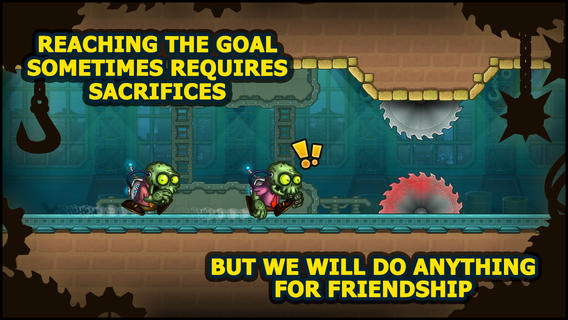 Well it seems as though “Deadlings” is a pretty great game though, like every game, it is missing certain things or has certain elements that could be fleshed out more and expanded on but, all in all, it is simply a great little game. The real fantastic thing about this game is that it doesn’t constantly badger you into making in-app purchases despite the fact that they’re available, the unfortunate thing is that this is a game you pay for so there shouldn’t be any in-app purchases at all but you take every little win you can.

It looks great and it plays great, even though there are small things wrong with it most people will be able to overlook them to fully enjoy the game, me being a reviewer…I couldn’t simply do that. Fans of zombies, fans of puzzlers, fans of platformers, you’ll mostly enjoy this game as long as you come into it with an open mind. If that’s you, then I hope you enjoy “Deadlings”.