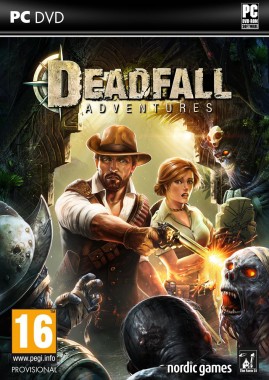 Overview
Deadfall Adventures follows an unique re-interpreted storyline that has spawned from the great works of H. R. Haggard “Lost World” genre (King Solomon’s Mines & Allen Quartermain). Inspirations from these novels led to the creation of famous figures like Indiana Jones that have fueled many fantasy desires of becoming treasure hunters or archaeologists. So how does Deadfall Adventures bring the focus of these desires to the gamer? Does the storyline content provide original work, or rely on previously used content? Let’s dig up some good ‘ol truth!

Story
How does a studio try to emulate a treasure hunter adventure without having similarities with well-known novels and films? Well, the developers for Deadfall Adventures managed to mix up a few cultural identities like “The Mummy”, “Indiana Jones”, and “Tomb Raider” and mold them into a single story. The protagonist is James Lee Quartermain who happens to be the great-grandson of the Allen Quartermain. Though his last name provides an exceptional reputation, he has poor money retention capabilities. Living off of providing tours and autographs in Africa, James is looking for the next big “thing” – if the price is right. And so Jennifer Goodwin, an American agent and former colleague, enters the picture to offer such a desirable task.

Presentation of the story is done very well through cut-scenes and character dialogue. However, the material presented can be construed as plots taken from the previously mentioned cultural identities. (1) In “The Mummy” there is an artifact that can re-animate the dead. This is clearly being done in Deadfall Adventures through the use of Atlantean tools. (2) While Indiana Jones spawned from the original Quartermain novels, we see immediate correlations with time periods and secret organizations – primarily Nazis. (3) And “Tomb Raider” along with the others, the protagonist usually finds a single piece of the artifact at a time and must combine the missing pieces scattered across the world. Such is also the case for James and Jennifer.

Gameplay
Deadfall Adventures can offer a healthy mix between FPS and puzzle gameplay, but players can ignore or completely miss opportunities to collect treasure from the grasp of deadly traps. For the latter adventurer the game offers the player Allen Quartermain’s compass, an ancient compass that directs one in the direction of treasure. When walking around a map with no treasure nearby, the compass will spin uncontrollably. But upon getting closer to the treasure, the compass’s needle will begin to focus in a single direction and eventually turn yellow signifying an immediate presence. Exploring the unknown is extremely encouraged in this title – you are an adventurer after all! 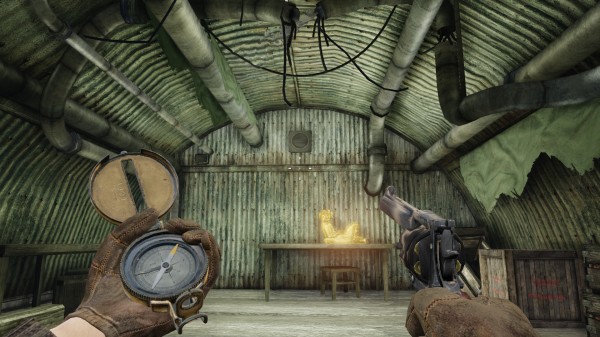 Puzzles can be simple or quite intricate. You may notice a golden statue is well within your reach, but some low hanging electrical wires may block your path. You can walk into them, or choose to live and simply shut down the wire’s power source. Die or get the treasure, decisions… decisions…

Offering variety in gameplay, there are many weapons that James Lee Quartermain can wield during his travels across the world. Sometimes a high powered rifle is necessary for the occasion in taking down ranged foes, or in other instances a heavy machine gun might make enemies reconsider running out of cover. Any gun that is able to be picked up will have limited amounts of ammo. This means that James can always count on his trusted dual pistols (unlimited ammo). Each weapon has been modified to have certain specifications such as reload speed, draw speed, and damage to allow for unique gameplay. 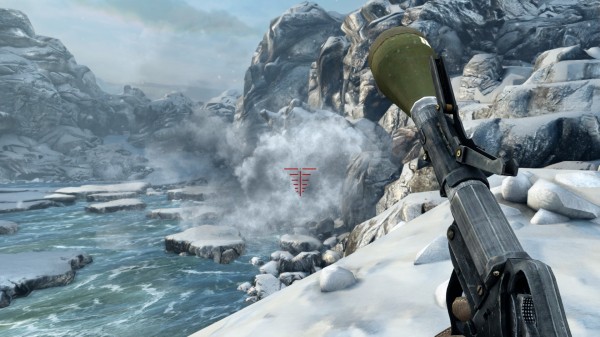 Beyond the normal weapons players can equip wonderful items like explosives! A good way to make non-mummy foes run to their mommy – see what I did there – is to chuck a stick of TNT or grenade at their feet. But even more impressive that just some explosive sticks is a grenade launcher. One such weapon becomes available to you in the Arctic and is essential to progress in the story. It’s not everyday that you get to blow up a side of a mountain…

Other than the Adventure/Story mode there are Survival and Multiplayer modes. Survival is interesting because it plays off much similar to a firefight scenario (Halo) or zombie zone (CoD). The positives to consider in this mode is that it can be an escape from the storyline or give additional play time after the story’s completion. You gain points for killing each enemy, and can progressively buy better weapons each new round. An important note to consider is that you will run out of ammo in this mode, so conserving ammo and using the scene’s traps would be beneficial. 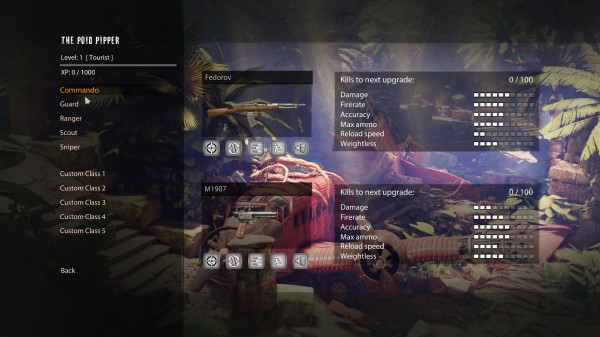 Multiplayer is practically non-existent. So far only a hand few of players are logged in the ranked system (12 total). There are plenty of interesting items to unlock in this mode. You may unlock weapons that you have found throughout the story mode and even increase your rank to unveil new articles of clothing to wear. However, such things are only accessible if a community is available to make it attainable. Though multiplayer is a nice option to have, there isn’t a calling for it in this type of game. I find it very hard for people to play this title and complete all achievements when the multiplayer has such a short coming.

Audio
While making the title authentic by relaying actual phrases used in the book series, Deadfall Adventures becomes repetitive in the non-story sectors of the game. This is particularly noticeable when dealing with your companion Jennifer Goodwin. Too often do you hear, “still think I’m a rookie Quartermain?”. At the very least there could have been a random selection of snarky phrases set in place for whenever Jennifer gets a kill.

Audio scores for levels and the main overlay do well to match tone and theme for a treasure hunter. The soundtrack certainly helped to place me in the mood of finding treasure or just having an all out shootout. I just wish I had a bullwhip to snap into a mummy’s face…

Visual
Environments are stunning! Deadfall Adventures does well to emphasize the importance of the environment considering the whole ‘treasure hunting’ aspect. Looking beyond traps that cause immediate death, landscapes and terrain make this game more enjoyable. Pause for a moment when riding down mine carts above a dormant volcano to capture the beauty and detail placed into this world. 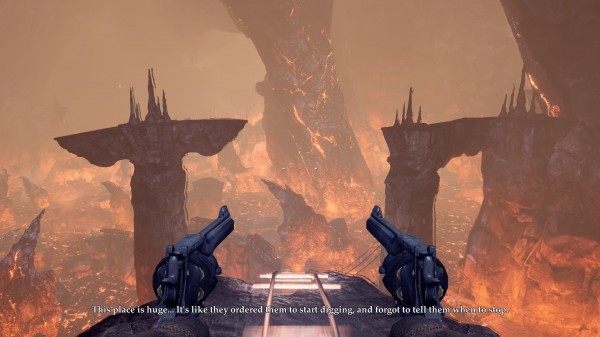 Another aspect that I thought the developers did well was the implementation of special effects. Early on you encounter the existence of the undead, and you need some way of dispatching these monsters. So how better to make mummies vulnerable than to use your very own flashlight! Powered with Atlantean crystals your flashlight turns into this burning flame that slowly turns a contacted mummy’s body into smoldering embers. The burning is done in stages and looks fairly neat as the skin/wrappings become brighter with flame. After pumping a couple bullets in the body limps to the ground and quickly disintegrates. 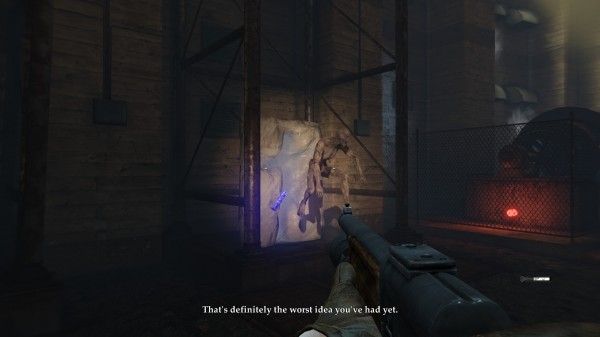 Not quite as amusing are some visual glitches noticed during gameplay. I wasn’t overly concerned when I quickly switched between weapons and items to notice that my compass became stuck on screen. I was testing this out on purpose to see how quickly I could bring up my double draw of pistols. Could be useful for those that like looking for treasure with both hands ready to shoot… However, the more concerning glitch is immediately noticeable in the storyline when shining a light on an encased mummy in the Arctic zone. As the mummy emerges, it “magically” shifts to be above the ground and no longer holding the treasure. Since this is one of the most noticeable glitches in the game, it makes you wonder what else could be wrong.

Overall
I did find the excitement that the developers were aiming towards in reviving the treasure hunting theme, but Deadfall Adventures just falls short in several areas that makes it unappealing at a $39.99/$49.99 price value. Playing the game for the story may be understandable; but offering a multiplayer with little to no community following just shows how much attention this game is receiving. Pretending to be an “Indiana Jones” is fun, but I would likely consider other titles in the current price range.