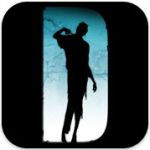 Ever wanted to face a zombie-apocalypse on the move? The Xbox 360 games of Dead Rising were all well and good, but for all intensive purposes, they were a little unrealistic. You would be very fortunate for an army on the undead to come knocking at your home, allowing you to fend them off from the comfort of your living room. But in real-life, it wouldn’t be like this. A horde of zombies is more liklely to attack when you’re at your most vunerable, such as waiting for a bus or relaxing in a café, which is why Capcom have brought Dead Rising to the portable platform of the iPhone: for a more “real” experience. 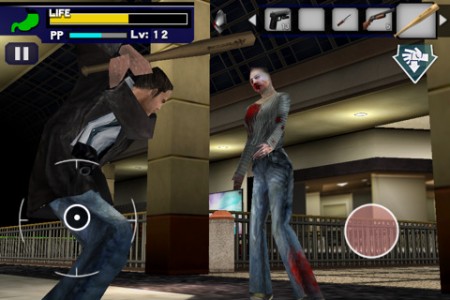 Dead Rising Mobile shares likenesses with the original Dead Rising that started it all off in that the game takes place in a shopping mall. In fact, the opening cutscene is so good, it wouldn’t look out of place in an Xbox 360 game. The sound and visuals are great, and for those brief few moments the storyline is enthralling, evoking feelings of curiosity as you try to decipher exactly what is happening before you are cast into the game-world. As those of you who have played the Xbox 360 versions will be aware, this initial cutscene is usually the last hint of any kind of plot because from here on out, it’s just a whole load of arcade-style zombie killing.

Essentially, it is just a toned down version of the original. Both the setting and the objectives are similar, albeit adapted to suit the iPhone’s capabilities. Some of these adaptations are for the better, whereas others detract from the overall experience, although it has to be said, most of these negative changes are as a result of the limitations of the iPhone as opposed to sloppy development work. 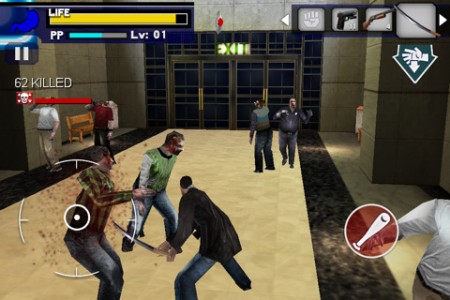 An example of a positive change is the adaptation of the menus, missions and save points. You save the game by going into ‘S-points’ which are located at regular intervals around the map. These are much more frequent in this version, which matches the fact that it is running on a portable machine meaning you can quickly jump in and out for short play sessions. From these ‘S-points’ you access the latest missions and select one to focus on. This can also be done from the pause menu which can be used to select which of the current missions the directional arrow will guide you to. Sadly, this directional arrow is very misleading and more of a hindrance than a help. It is so confusing that it is actually better  to use it as an aid to your intuition, rather than relying on it as a full-on guide to take you directly there.

However, as I said, some of the changes do detract from your enjoyment of the game, but to be honest, they are hardly the fault of the development team, but rather the iPhone’s processing limitations. The standout difference is the number of enemies that can be on the screen at any given time is a lot lower on this game. Consequently, it never quite feels like an army of the undead- more like a small swarm followed by another small swarm and so on. Another factor that relates to this point is the poor draw distance. As a sacrifice for graphically sound visuals (at least for the iPhone’s standards anyway), enemies only appear once you are close enough by a specific distance. 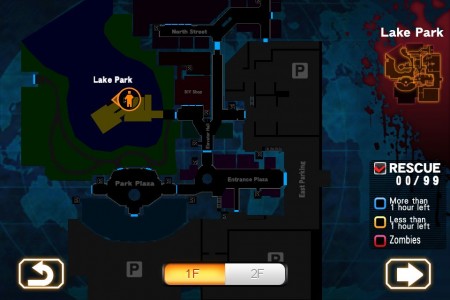 Overall, Dead Rising Mobile on the iPhone is a good realisation of the console games. At times it suffers as a result of the iPhone’s limitations but on the whole, the developers have done well to bring the series to the handheld device. There are the same cheap thrills of the console version, allowing you to destroy the zombies with a variety of weaponry, including guns, knives and your bare hands, as well as other items you find along the way. There are even some interesting social networking features, giving you the option of issuing a Rescue Call as your statuses, although you really do need a friend with the game to make the most out of these. I can’t help but recommend the console versions of Dead Rising over this. However, if you are a very mobile gamer who is always on the move, or if you don’t have an Xbox 360, then this is ideal.