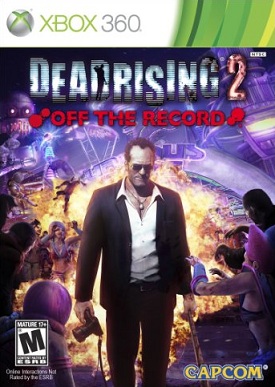 Overview:
One of the most common enemies you can find in the world of gaming today is the zombie. Sure you can find countless reasons as to why that is, but the fact of the matter is that one company has taken zombies and turned them into their bread and butter. Capcom has made quite a name for themselves with their zombie titles, such as Resident Evil and most recently Dead Rising.

Dead Rising 2 Original was released last year and seen by many as a huge improvement to the series as a whole, but it was missing one thing… a certain photo journalist who has covered wars. Now Dead Rising 2: Off the Record has been released by Capcom and it brings back everyone’s favorite man with a camera, Frank West. With a few new modes and adjustments, does this fresh coat of West paint justify a purchase of a title we’ve seen a year ago?

Story:
One would believe that managing to break such a huge story like what occurred at the Willamette Mall would be enough to set one up for life with enough popularity and money to make anyone, even a journalist content. But living in the limelight can only last so long and life has become hard for the now bankrupt Frank West. 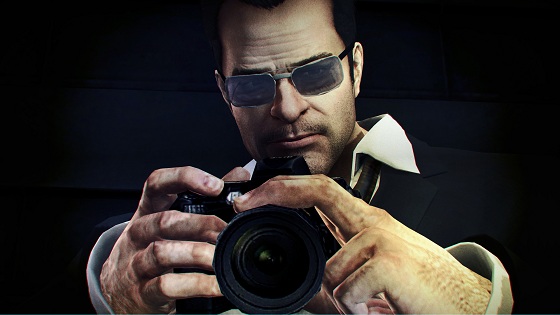 Players are given a brief explanation of what occurred in Frank’s life after the events of Dead Rising 1, and pick up in the only place Frank can manage to find some money. That is the reality TV show Terror is Reality where Frank must fight zombies in a twisted version of wrestling including grinders and fire while risking it all to win big. Shortly after his time on stage, Frank’s journalistic senses begin to tingle as he discovers something isn’t quite right about TK and that there is trouble brewing in Fortune City.

Immediately, those who have played the Dead Rising 2 Original will see that the story begins to deviate slightly in detail from the original here, though at its core most of the game is quite the same. The storyline is still more or less the same thing, wherein Frank West must survive for three days before the military arrives. This of course entails rescuing stranded survivors and fighting off psychopaths of every shape and size, quite literally in one case.

One of the biggest differences here is rather than having a daughter to return and give Zombrex to; Frank himself will need it every 24 hours as he is still infected from the events of the first game. This is a nice little addition which helps streamline the game a bit more as you can give yourself Zombrex with a simple tap of a button when you need it, as long as you have some on hand.

The biggest question about the storyline though is whether or not it is worth playing through if you have played Dead Rising 2 Original. Now if you haven’t, then by all means this is perhaps the best way to jump into the series, especially if you managed to just finish the original Dead Rising as the story flows perfectly between the two. But back to originality. 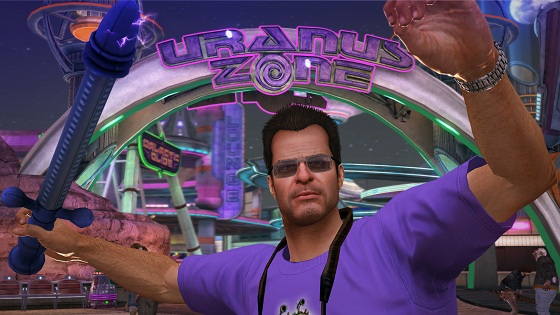 Dead Rising 2: Off the Record will feature many superficial differences to the storyline which some may recognize. Whether it be how a psychopath responds to Frank, or even the new psychopaths added in these are nice changes. But the biggest change is how the main storyline will unfold. At its very core the story is still the same, but the twists taken along the way have been changed significantly and near the end players will be given an entirely new experience that quite honestly sums things up better than Dead Rising 2 Original.

Graphics:
Dead Rising 2: Off the Record unfortunately hasn’t seen much of an upgrade from Dead Rising 2 Original, which means that a lot of the mall looks exactly the same as you remember it. A few areas have been expanded upon however and a number of small additions have been added to existing places, including the neon lit Uranus Zone which is an entirely new and fun area with plenty of environmental interactions that have been designed well and provide plenty of extra enjoyment.

On the other hand, while there still can be many hundreds of zombies on screen at a time they will still look quite the same minus a few new zombie models that have been thrown in. There is also a small amount of texture pop that I experienced when driving through areas which I did not recall from the original.

Audio:
Being as there is a completely new main character as well as a handful of new survivors and psychos of course there are a few new voice actors who join the scene. Frank’s voice work is handled nice and he sounds the same as he did in Dead Rising 1, and a number of other new characters are given decent voices. Everyone else will sound similar to what they did in Dead Rising 2 Original, but some of their dialogue is re-recorded as new lines are used often in the original story. 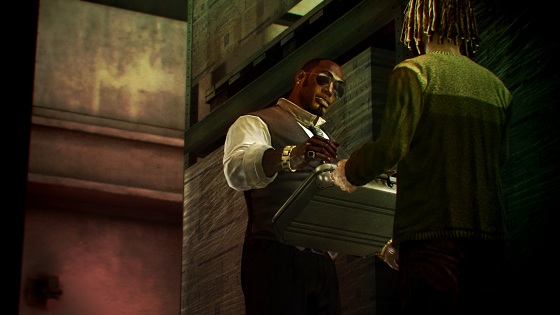 As usual the background music as you roam through the mall matches a mall’s music perfectly, something non-obtrusive and calming. That all changes whenever a psycho is met and usually rock music helps get the blood pumping quickly and the new music for the new psychos is enjoyable, though still mildly forgetful.

Something else quite noticeable is the fact that all radio transmissions are completely voiced now. This means that your conversations over the radio, which is now thankfully completely hands free for all your zombie killing needs, are voiced so you will constantly hear Stacey tell you wear survivors are or what she has seen. Also be prepared for a few scares here and there when your peaceful walk through the zombie infested Fortune City is abruptly disturbed by a classic horror movie sound and an unseen or previously thought dead zombie lunges and grabs you from nowhere. This sound effect plus zombie attack never failed to cause me to jump and make me stay alert.

Gameplay:
Dead Rising 2: Off the Record doesn’t break from the rest of the series significantly with its gameplay, as everything from Dead Rising 2 Original returns. There are plenty of zombies to kill with a large variety of combo weapons, all of which return from the past game including a handful of new weapons usually focused around the new Uranus Zone and players level up Frank by obtaining PP by saving survivors, performing certain tasks and of course killing zombies and psychopaths. 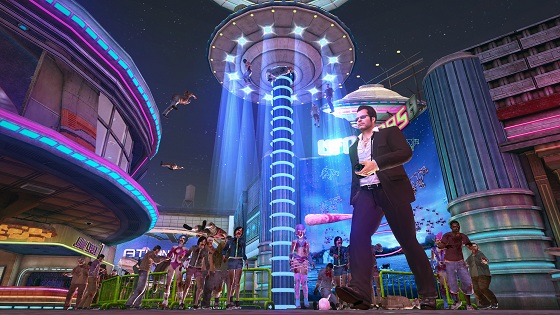 There is a completely new way to earn PP however, though perhaps new isn’t the best way to put it. Frank West returns complete with his trusty camera and this means that there are many pictures to be taken. Psychos and survivors will flash PP symbols over their heads during special moments, PP stickers are littered around the environment and players can take the same classic genre pictures as before including Horror, Drama, Erotica, Outtake and Brutality. The camera feature makes a welcome return in Off the Record and while some may not use it very often, others will enjoy finding and taking the craziest or most valuable pictures possible.

Something that many gamers may find quite useful is a new adjustment to the way the save system works in Dead Rising 2: Off the Record. Namely players will now be given checkpoints whenever they enter a new area, complete a mission and begin or end a fight with a psychopath. These checkpoints serve like something similar to an autosave which allows you to load them whenever you feel like or in case you happen to die. Saving in restrooms is obviously still necessary as that is the only way to permanently record your progress but this is a huge plus that allows for players not to have to run to the bathroom every five seconds to make sure they won’t lose their progress upon death. 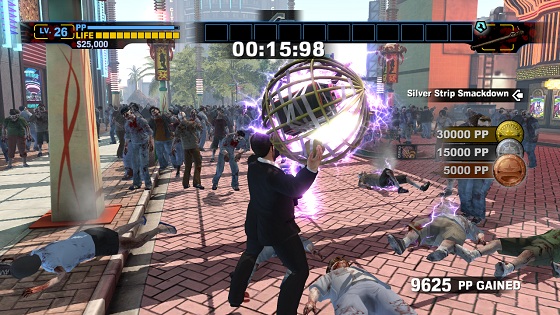 If story mode isn’t quite your thing however, rather than including Terror is Reality from Dead Rising Original, players now have a completely wide open mode named “Sandbox Mode.” This gameplay mode places the player in Fortune City with absolutely no time limit. Frank no longer needs Zombrex, there are no missions to do, just pure zombie killing and exploring fun. Players can also take on certain Challenges which are littered around Sandbox Mode which range from racing to an area in time, killing a certain amount of zombies, obtaining PP, and much more. Players can then rank themselves on leaderboards as well as take any money or levels they earn into story mode to help themselves out.

Of course the co-op mode has returned as well. There are specific co-op only challenges littered throughout Sandbox Mode which means you are more than welcome to bring a buddy along to kill zombies and complete these Challenges. Or for those who don’t want to run around aimlessly with a friend they can also join in story mode and assist in any way possible here.

Overall:
Dead Rising 2: Off the Record takes the protagonist and photo mechanic that people loved from Dead Rising 1, the gameplay mechanics of Dead Rising 2 Original and combined them together in a mixing bowl, threw in a few spices of enhancements, story adjustments and new content to create what we have here.

Now the biggest problem is the fact that some may see this as a simple expansion to Dead Rising 2, and in some rights it is, as the storyline is still quite predictable for the most part and there are a few adjustments to Fortune City but not enough to make you feel like you’ve never been there before. But the inclusion of the Sandbox Mode and the new better flowing storyline are certainly enough to make Dead Rising 2: Off the Record a title that surpasses its original.

I give Dead Rising 2: Off the Record