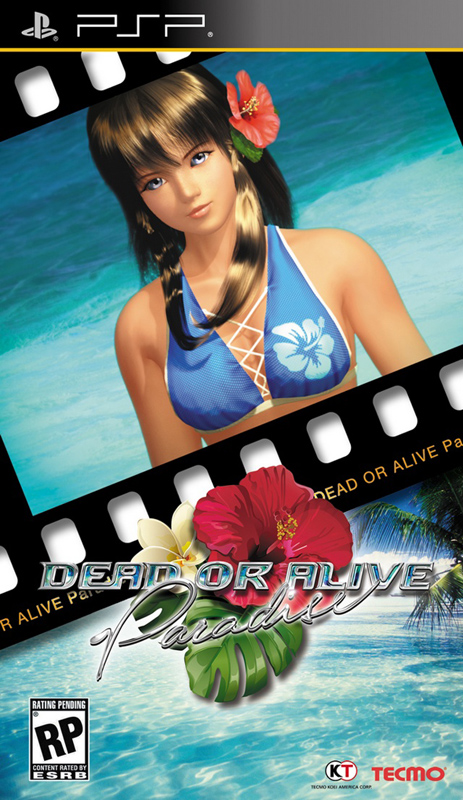 Overview:
Now Dead or Alive is mostly known for being about fighting but in recent years the girls of DoA have made appearances in two different spin off games known as Dead Or Alive Xtreme. These games place the female characters of the DoA franchise in bikinis or swimsuits, your pick, and allow them to play volleyball with one another without any actual violence. Now the series has gone portable with the Dead or Alive Paradise, but does the shrinking of the screen also shrink the ability to stare at girls in bikinis?

Story:
There is a semblance of a story here, but for the most part it just gives a reason as to why all of the different girls from the Dead or Alive series have shown up. The story is introduced with a very bad looking CGI cutscene showing Zack and Niki bringing back New Zack Island back to the surface with the help of some aliens. 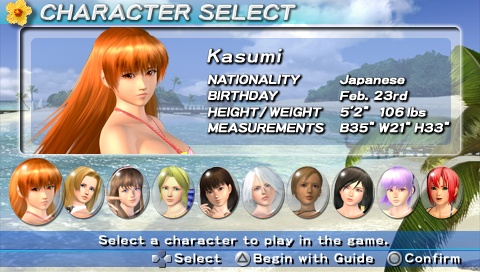 Then the game begins anew with the player able to select one of ten different girls(seen above) to begin your vacation with. The girls are invited to the island, some with false pretenses, and others to simply relax on the island. That is all there is really as the rest of the story falls away to simply letting the player take advantage of the DoAP’s mini-games and camera function.

Graphics:
Unfortunately for a game that would usually be all about the visuals and the fact that the players purchased it to primarily focus on the girls it is depressing to say that the girls themselves are very jagged looking and literally rough around the edges. Now it would have been one thing if the rest of the game had been bad looking but the girls themselves would be fine, but that is not the case in this one. The girls may not have be some of the worst things you can find on the PSP but for a game centering around the sights to see this is a major down point.

Plus as weird as this may sound the physics that the previous Dead or Alive Xtreme’s have sported have gone completely out of the window in the case of Paradise. The breast physics are unfortunately really messed up this time around as they no longer appear even vaguely realistic. When each one is bouncing around completely independently from the woman’s actions it is entirely disenchanting. 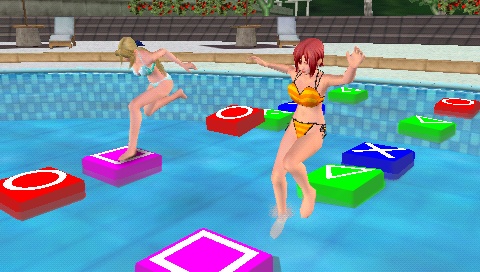 Audio:
It is worth taking note that players can not only use the background music that the game comes with, which is a mix of light dance songs and up-beat music, but you can also use music stored on the PSP. This is handled by placing Music onto your PSP on its own but not in a folder. For some odd reason if your music is in different folders then you will not be able to select it for use during your volleyball game or staring session.

Gameplay:
As you begin your vacation on New Zack Island you find out that you will be having two weeks to enjoy your time there. The main parts of the game you can experience vary between two different mini games that you can play and earn Zack dollars, give and receive gifts from the other girls on the island to build your relationship with them, and buy plenty of swimsuits to have your girls wear during their time on the island.

Now these mini-games are the Volleyball and Pool Hopping. Oh and there is the gambling section too which gives players the opportunity to gamble away their hard earned money on blackjack, poker, and slot machines. These gambling sections also introduce Rio who makes her first appearance in a game outside of Japan. Now back to the other two mini-games. Pool Hopping gives your girl the chance to race with another girl on floating pads that have different buttons on each one. You can press the buttons on each pad to make your girl jump to that pad. Further jumps require a longer press of the button while one immediately in front of you only requires a tap. The mis-press of a button will cause your girl to fall into the water and lose the race. 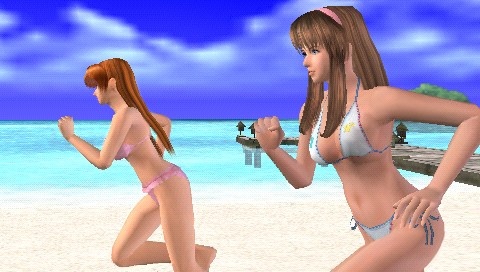 Now the other mini-game, volleyball, is more centered on what players have experienced before and is also where players will spend most of their time gathering money. The volleyball mode is serviceable at best and works as great as players could expect with the volleyball mechanic. The mode is put together well and as long as you work well with your partner you will be able to rack up the wins and increase your friendship with your partner.

Now your money can be put to a number of different uses. You will be able to purchase a very large collection of swimsuits that vary from cosplay, to relatively conservative one piece swimsuits, to extremely skimpy bikinis that barely cover any part of the body. These swimsuits can be worn by your girl as well as given as gifts to other girls on the island. You will also be able to purchase different miscellaneous items that each girl has a favorite for and can be gifted as well.

Now when you become good friends with the different girls on the island you will receive something called Venus Clips. Venus clips are more or less videos of the girl who gave them to you performing various acts around the island. These range from crawling along a few tree trunks in the jungle, swimming in the ocean, or lounging at the poolside. These Venus Clips are also a way for players to experience the camera system which allows players to take different pictures of the girls at various angles to put into a photo album for themselves. 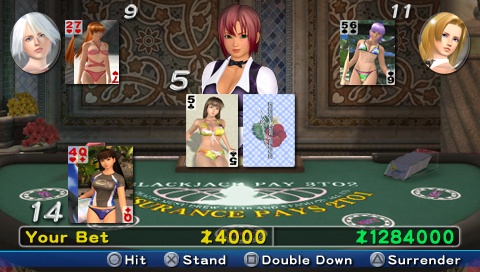 Sure there is a lot of bad here, but there is one shining light that I have mentioned again and again in this review. There is a very large collection system as far as the bikini systems go, and the friendship rating with the girls is actually well done so there is a redeeming factor if you enjoy collecting different things and unlocking new swimsuits while also building friendships with the other Dead or Alive girls.

Overall:
Now Dead or Alive Paradise may be exactly what you are looking for if you want to pick up a game that can easily provide countless hours of entertainment while unlocking countless amounts of swimsuits and place them on the different girls. There just isn’t a whole lot of depth to DoAP considering there are only two mini-games and gambling to be had, and unfortunately for a game that is all about looking at female characters and enjoying the different views you can experience within the game, that the graphics are sub-par at best.

I give Dead or Alive Paradise