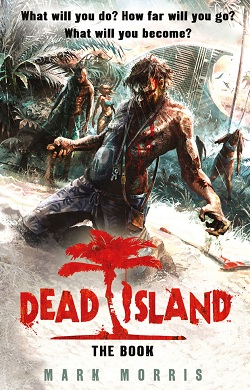 In our review of the game, Dead Island was criticized for a bland and poorly explained story. With the novelisation telling the same story as the game, can this book put more weight behind the plot? It depicts that same fictional tragedy on the island of Banoi, a notably different setting for a zombie apocalypse, where the spread of the virus quickly reaches pandemic proportions and a group of individuals are thrown together for their abilities and an immunity to the virus that they have in common. They must escape from the island to safety, encountering other survivors along the way, all the while getting to the bottom of how and why the holiday resort was subject to this abomination.

Aside from a few minor alterations, it follows the plot of the game wherein Purna, Sam, Logan and Xian Mei cross paths in brief encounters, before being cast together as a rag-tag quartet of zombie killers soon after. The author wastes no time in getting down to the gory stuff, because it’s not long before detailed descriptions of spurting blood, severed limbs and decapitated heads surface, with the same levels of violence appearing in each chapter thereafter in order to completely capture the scenario. While the stomach-turning result of all this grisly combat shows it does its job, it can get a little heavy-going when Morris runs out gruesome ways for the undead to be killed or in instances where the action becomes particularly repulsive.

Some respite comes in the form of wry humour and the occasional comment bouncing off the other-worldly circumstance the characters find themselves in. A regular use of expletives is also used to convey the seriousness and the raw emotion of such a situation. Disappointingly, while clearly leaving room for a sequel, the abrupt and inconclusive ending comes as a shade unsatisfying, and means that finding out what happens to Purna and co. relies heavily on the commercial performance of the game.

With bloody dispatching of the undead and swearing throughout, Dead Island is most definitely an adult book, and even then, it could prove too strong for some adults, as the subject matter of a zombie apocalypse means it’s certainly not for the squeamish or those faint of heart. It’s a good read for those wishing to flesh out the story of the game, and the unusual setting ensures this isn’t your typical outbreak of an infectious zombie disease. However, this setting also doesn’t make Dead Island: The Book fantastic holiday reading material unless you want to be known by the other holidaymakers as that paranoid guy on the fourth floor who double-locks himself in his room all day.