Overview
Perhaps we can blame George A. Romero. He started this whole trend for any media containing zombies to have the word “Dead” in its title. Com2Us’ iOS game Dead City continues this tradition, along with many other zombie-game tropes. In a genre as stale and numerous as its central enemy, how can Dead City differentiate itself from the rest of the horde of zombie games? 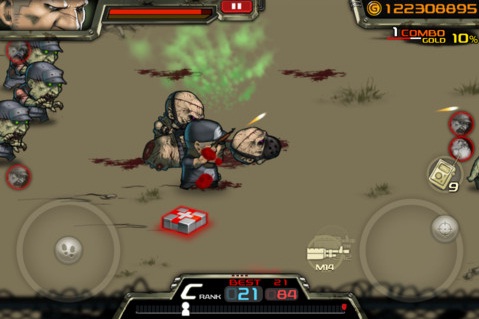 Gameplay
Dead City is pretty self-explanatory: slaughter the dead as you make your way through an overrun city. You do so via the mechanics of a side-scrolling twin stick shooter: left stick controls movement, the right aims your weapon. It plays like Metal Slug, fitting neatly into the conventions of a run-and-gun shooter. The screen moves left to right automatically, with the player moving around within that, as zombies approach from the either side of the screen.

You won’t find anything particularly new in Dead City, but that doesn’t mean it isn’t enjoyable for what it is. The conventions it uses are implemented well, making it undeniably fun to play. Zombies are the go-to enemy for games that need a heap of targets on-screen at once, and thankfully Dead City throws a bit of variety into the enemy types, to stave off the fatigue of looking at 40 thousand of the exact same zombie.

There’s a pretty commendable number of zombie types with different attributes. Some move faster, some take more damage, some leave puddles of hazardous slime, some explode on death. Even among the stock-standard zombie – with average speed, attack and health – there’s plenty of variety in their design.

But you know what’s even more fun than shooting zombies? Running them over in a car. Collect enough fuel in a level, and you can jump behind the wheel, bouncing defenceless ex-humans off your front bumper. Offering a car as an entertaining reward is a clever method of encouraging players to strive for the pickups, rather than just for the sake of a better score. 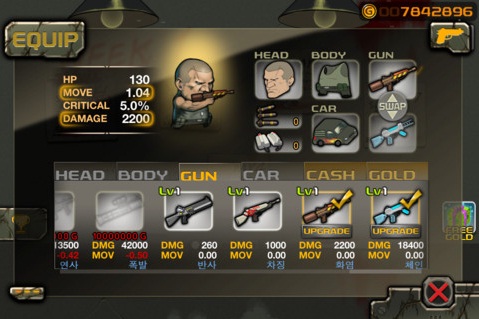 Advancing through the game is made more fun with the addition of a few RPG elements. Spending gold can improve your weapons and clothing, for perks, movement speed, higher damage and better critical percentages. You start with a bit of gold, and completing levels nets you more, dependent on your zombie kills. But the most effective source of income is the bonus for levelling up.

Each new rank is reached by meeting a few set goals: you might need to rack up a certain number of kills in total, or of a specific type of zombie. Maybe you have to destroy x amount of barrels, or run over enough zombies with a car. The tasks are varied enough to keep things interesting, and the system keeps progression feeling organic. There are no direct barriers to keep you from advancing, but you might struggle on later levels without upgrading your equipment. Replaying earlier levels to fulfil your zombie kill quota or other goals is the quickest way to advance, and it never feels like a grind. Success always feels like it’s only just out of reach – and that’s a good thing, keeping you engaged enough to continue playing.

Unfortunately, as with many iPhone games, the controls are a little awkward. The virtual thumb sticks work in theory, but without physical ones there’s no tactile feedback. The character is less responsive to your thumb sliding around the touch screen than is necessary for a game like this, leading to some frustrating deaths.

In-game micro-transactions let you use real money to buy continues, better weapons, or gold to spend on upgrades. I don’t have a problem with them as a business model, but they’re a little too blatant in Dead City. They’re still optional of course, but ads for better equipment pop up far too often, and the prices are rather ludicrous – a weapon like a flamethrower can set you back $9.99. It brings up all sorts of complicated questions about the iOS pricing structure – a game like this is worth paying for, but I don’t think an in-game weapon is. 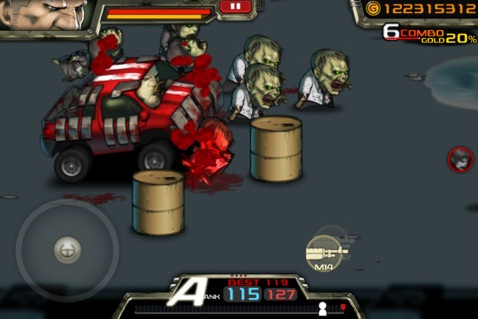 Visuals & Audio
As mentioned, Dead City plays like Metal Slug or similar side-scrolling shooters, and the visual style matches those classics. Its gritty urban setting meshes well with an almost-comic book style. It’s all together much cleaner than the retro-pixel look it could have borrowed from the games it draws inspiration from.

There’s a generic rockin’ soundtrack to the game, which accompanies the action well enough, but isn’t exactly memorable after you stop playing. The rest of the sound is fairly limited, with the player character only contributing a few basic comments during play, and most zombies essentially making the same sounds. It feels like a missed opportunity to use specific sound effects as indications of which zombies are about to appear, and as a whole, the audio seems to have been largely overlooked.

Overall
Dead City is hardly groundbreaking, but it nails what it’s trying to be: a decent side-scrolling shoot-em-up, and an entertaining way to spend a train trip or two. The only major downfall is the invasive micro-transactions, which chip away at some of the enjoyment to be had. I’d rather pay a couple bucks for the game than for in-game items of little consequence. On the plus side of that, the core game is free, which makes it very easy to recommend.