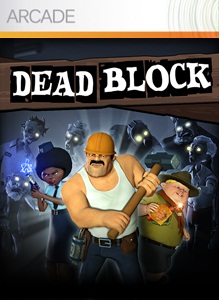 Overview:
Zombies have throughout the years been a common tenet of much horror and comedy based mediums, such as television, cinema and video games. There have been so many iterations of zombies it has become difficult to define what count as a zombie and what doesn’t. We have the bizaare zombie/vampire hybrids from ‘I Am Legend’, the infected from the ‘Left for Dead’ series and the parasite infested zombies of ‘Resident Evil 4’, which are all cases which blur the definition of what a zombie really is. 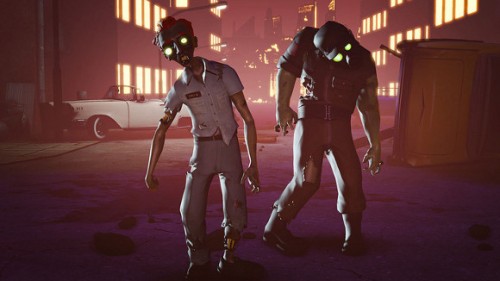 Story:
Dead Block doesn’t have much in the way of story besides that 3 people, a man, a woman and a kid must attempt to survive a zombie invasion of their town by blocking off the dead and completing various missions to be able to move on to the next area of town.

This is perfectly acceptable for a game of this nature, any more of an in depth story would detract from the fun of the game and its overall feel. Although we know little about the characters they each have their own individual personality which brings them to life, rather than them simply being a different looking character to play as.

The idea of a zombie apocalypse is an old concept but one that is conveyed well in the game, which plays it off for mostly comedy, with humourous little moments such as getting zombies to dance by playing a song on the jukebox. This fits perfectly with the style of Dead Block which in many ways echoes the Team Fortress series in design and humour. They definitely got the right balance of conveying a setting and characters with humour placed in carefully whilst not falling into deep plot which this title clearly doesn’t suit. 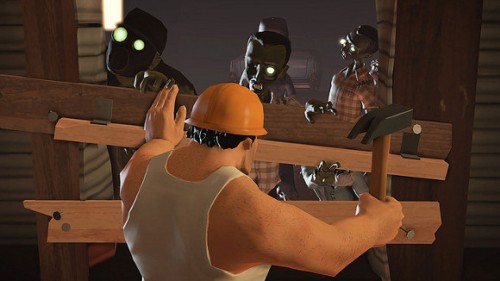 Gameplay:
There is little to fault in the gameplay of Dead Block. Everything works as well as you would expect it too whilst raising the bar for the Tower-Defense genre. I had never imagined the genre to be utilised in this sort of way and I have to say after playing this, zombies and tower-defense go hand in hand. The entire concept of zombies, perfectly suits the genre.

The blocking mechanic is superbly done, providing much in the way of strategy. During co-op play, my partner and I found it definitely effective to control the flow of zombies towards you in certain situations, whilst also serving as a means of protection if you are low on health. With maps so big there is near limitless potential for strategic plans, whether it be attack plans or defense plans.

The different mission types where particularly well implemented even throwing me off at first, when the item search mission came up. I literally ended up tearing the entire house apart whilst cleverly placing blockades to trap and slow down the oncoming hoard of dead.

Cleverness is often rewarded in Dead Block, with certain upgrades becoming available to create different types of blockades, such as a freeze block. Which as you’d imagine freezes zombie intruders. It’s always a good thing when a game rewards you for thinking outside of the box and Dead Block does so tenfold.

I found myself plotting game plans with my partner during co-op, which I believe was a far more fun experience in comparison to the single player mode. The game feels as though it were made for split-screen and during single player can feel a little slow and limp (zombie pun intended). If you have a friend, it’s a good idea to play through along-side them for the full experience of strategising and working as a team against some living dead. 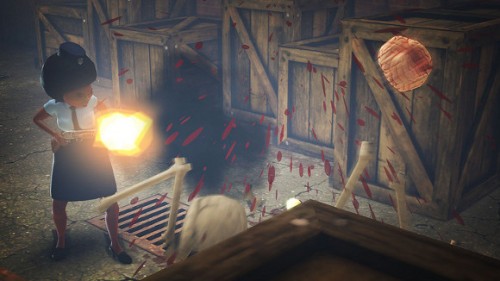 Visuals:
The first thought that comes to mind when looking at the visuals of Dead Block is, Team Fortress and George Romero had a baby. Their is definitely graphical influences from both Team Fortress and Romero which is nothing but a good thing.

The character designs would fit right in with the characters of Team Fortress that is for certain. The overall graphics are quite nice for and XBLA game and look very crisp and shiny through-out.

My only gripe with the visuals is that at times it can become a little crowded when a hoard of zombies are attacking you or have you cornered. It can get very messy but isn’t nearly enough to derail the rest of the excellent visuals the game has going for it.

Audio:
Dead Block has exactly the sort of music you’d expect – Rock N’ Roll! The entire soundtrack is perfect for the game and the main theme is simply brilliant in it’s ability to give the game a sense of grandeur that it most likely would not have without it. The classic rock tunes pump along at a laid back pace, but picks up splendidly when danger is about.

I think it’s worth noting a point in the game when you initiate a Guitar Hero like mini-game which allows you to rock out the main theme of the game, thus causing all the zombies present to begin moshing or as I joked at the time, the monster mash.

Besides the awesome soundtrack the game boasts a great range of sound effects and quirky groans for the different types of zombies. The zombies that make frog noises were my personal favourites. Overall the audio and soundtrack of the game is brilliant and fits Dead Block perfectly. 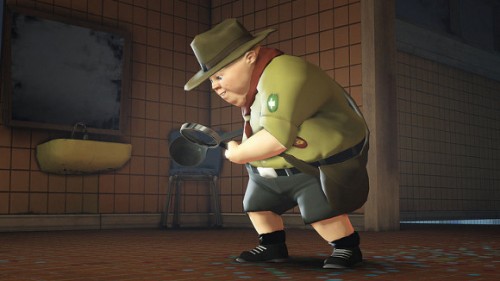 Conclusion:
This is a title that you will either love or hate. Dead Block features some rather intelligent tower-defense gameplay which requires more though than simply run in and kill, placement of blockades can be pivotal to your success or failure of the mission. Which is exactly why it may be loved or hated, if you are looking for a simple zombie hunting game, this is most certainly the wrong game for you. If you are looking for a simple yet intelligent game, I whole-heartedly reccommend Dead Block to you.

I give Dead Block: