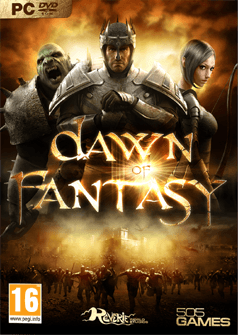 Imagine a game that’s a lot like Stronghold, only, it had an online component where you could build your own Strongholds and wage war on other players. You would now be imagining Dawn of Fantasy. The online component of this title is the one that is so prominently advertised, but it is the worst part of the game. In all honesty, the best part of this game is it’s offline features; which there are more of than the emphasised online components.

Dawn of Fanstasy has an intricate, yet brief, story that is found predominently on their website. The story is also told, in part, through the games tooltips and menu descriptions. Other than that, it really isn’t involved too much within the game. 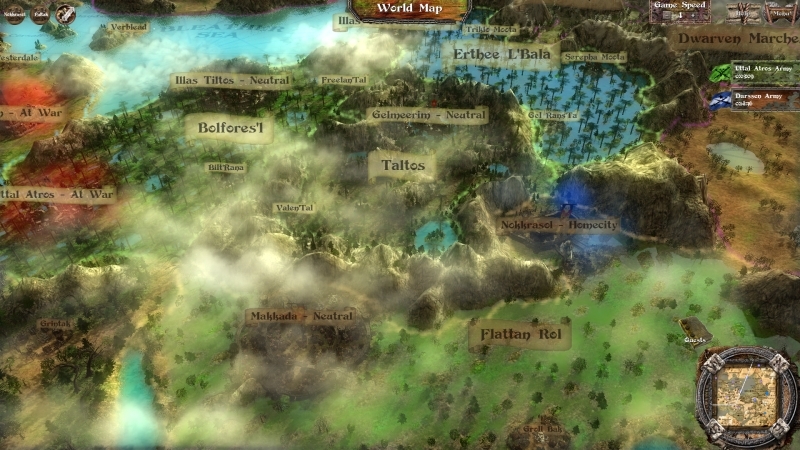 I would have loved to have seen the story progress in a single player campaign, but instead, we get a single player component that exists soley to train the player for multiplayer battles. I can’t really fault the game for this though, as it is the kind of game built with multiplayer in mind, so having players run through some kind of story wouldn’t have fit the game too well.

Overall, the story fits nicely into the background and does not serve to hinder gameplay by becoming an annoyance over the multiplayer component.

Remember how I said that this game was similar to Stronghold in the opening paragraph? Well, it’s because it is. Throughout the game, players will be conducting sieges on other players cities and towns. When this happens, one player is the attacking party, who gets a limited amount of units and what have you (whichever units they’ve put into their attacking army is what they’ll be limited to); while the other player is the defending army and they have to defend with all their availble units that they have in their stronghold at the time.

Using your units tactically in this game will give you much success during a siege, playing with a plan will guarantee success. This is where the single player skirmish modes come in handy. By playing in these skirmishes, players are able to practice various strategies to employ online without risking their actual units. 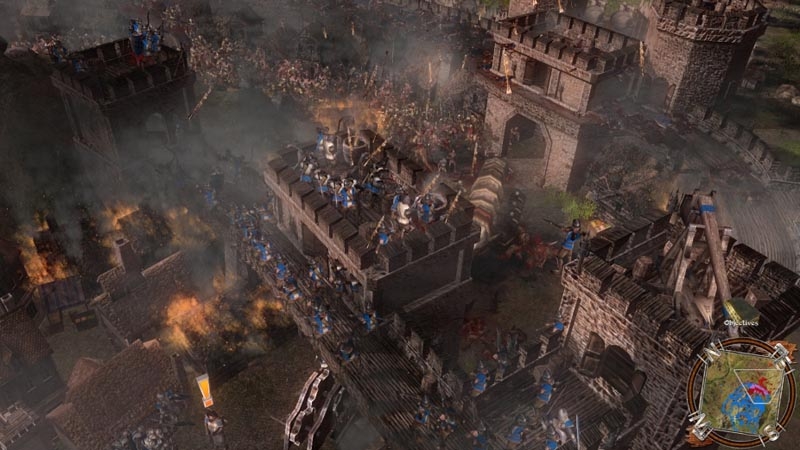 Of course, as I have stated previously, the online component of this game is probably the weakest component of this game. In contrast, the single player modes are amazing; it’s just too bad that they’re not the emphasised components. In the online mode, players are required to build their own towns/cities. Now, this would normally be a really cool aspect to a game, but, in this game, it falls flat on its own face. Towns require a ludicrously large amount of time to build, and any player will be required to invest a very, very, large amount of time to net any kind of visible reward. By reward, I mean, a decent town.

Ideally, in this game, you would build things then be able to alt-tab out and do something else while waiting. But, when alt-tabbing out of the game, you will often hear looping reminders as to the welfare of your town. Now this probably sounds like a good thing, but when you don’t really care, and are just waiting for your towns components to build, it becomes irritating, especially because its a continuous loop of the warning, as opposed to a once off thing. This means that you will often have to keep the game running in the foregroud, often for incredibly large amounts of time (a simple farm takes 15minutes to build), if you dont want to be irritated while playing. I should mention that any orders you’ve set while logged in continue to progress while you are logged out, but it seems like a hinderance to be constantly logging in and out to use your own PC. 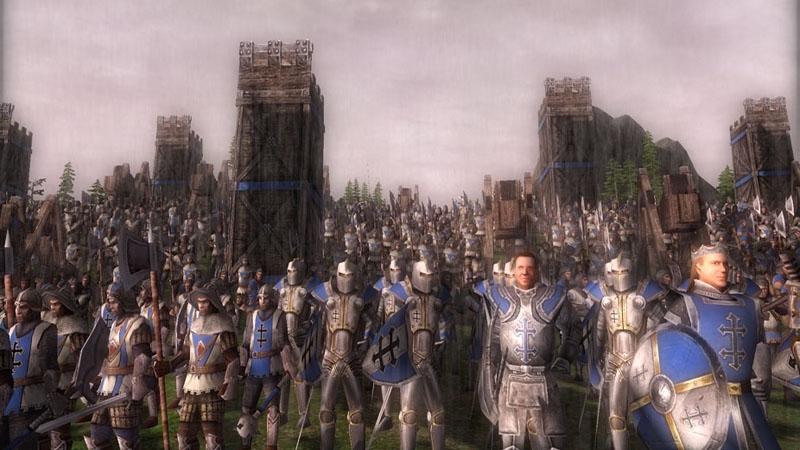 One thing that this game does right though, are the single player components. I’ve already talked about the skirmish mode, so I would like to point out the Kingdom Wars mode. In this mode, players go on a campaign of sieges against the computer opponent. This is incredibly fun and I wish that it was developed a bit, as maybe a full-blown single player campaign with an awesome story.

The last point I want to touch is a minor one in terms of gameplay, but is still a gameplay element so therefore it needs to be tocuhed upon. And that is that there are three playable races within the game, and each have their own strengths to put into the battlefield.

Overall I felt that this games online component was fairly weak, even though it was the most marketed part of the game. For a better experience, play the single player mode.

This game looks pretty bad, it probably wasn’t meant to, but it does. Seriously, the realistic style, coupled with the awfully un-optimised graphics engine, severly cripples even the most strongest of PC builds. You can see that the developers have used a simpler graphical engine to keep specifications as low as possible, but ultimately, it is countered by the lack of optimisation on the engines part. On my machine, I had to seriously switch a lot of settings lower than what I would normally expect my PC to run based on the visuals of the game. 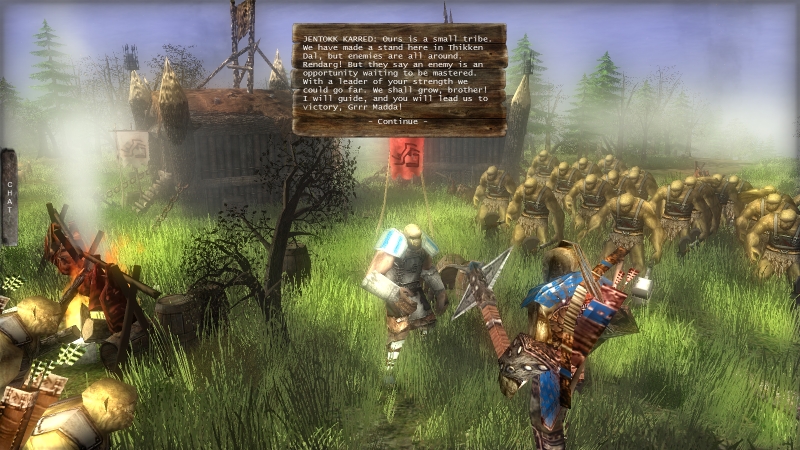 Maybe over time, the game will be patched and the engine will be optimised more and more, but in the state that I played it, it did not run at all that well. Unless you have the strongest of rigs, do not expect to have this game running at maximum.

Overall, I feel that the visuals of this game are its weakest point, even over the blatantly poor online mode.

In Dawn of Fantasy, the audio is probably one of the best things. The sounds accuratly portray what it is like to be in a medieval kind of world. The music, I felt, was probably the weakest point in the audio, but in no way is it as much a hinderance to the game as the poor graphics engine is to the visuals. 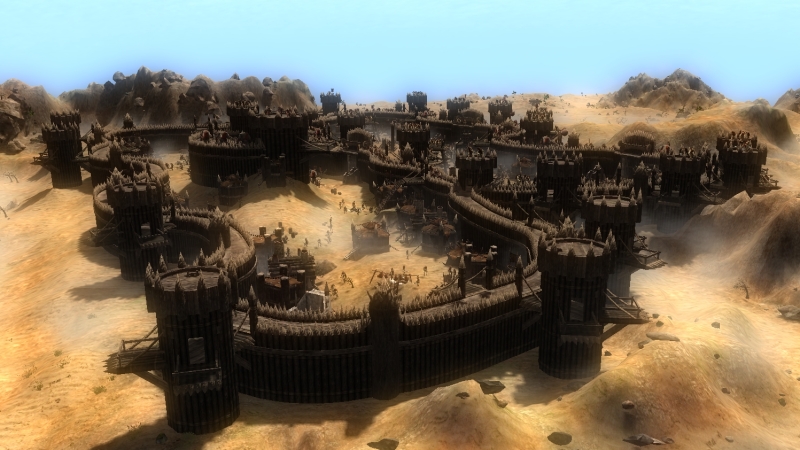 Ultimately, there isn’t really much to saa about the audio; it’s a tool that does the job of setting the mood and is the best part about the game (apart from the single player components). Take whatever you will from this fact.

Dawn of Fantasy is a lot like that spyware filled game Evony, only it’s 3D and mixed with Stronghold. Unfortunately, outside of the pretty good single player component, the game is long and unrewarding. The menus are also pretty bad and I had to register twice before the game would register my account. With a patcher that likes to stop working as much as the visuals fail to deliver, I’d recommend avoiding this title, unless you would love to play a game that is incredibly long and worn out. Perhaps if you work in an office and carry around a laptop and play it between tasks, you might like this game, but most of do not have the time commitments to really give this a proper go.