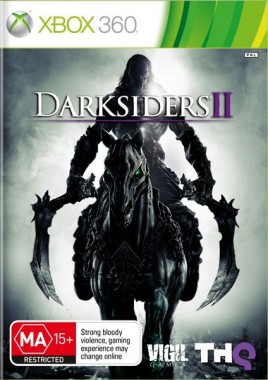 Overview
Quick! Name me one of the Four Horsemen of the Apocalypse.

You said Death, didn’t you? Knew it. Death is the Paul McCartney of the Four Horsemen, the one who’s broken free of the group and continued a successful solo career in mainstream culture. Being the most familiar face, it’s surprising that he wasn’t the star of the original Darksiders, but that oversight (or creative decision) has been rectified with the second game.

Yes, you finally get to play as Death, the physical incarnation of the ultimate fate of every living being. That’s a pretty lofty promise of power for players, but does it pan out?

Story
If you haven’t played the original, jumping into this one is easy enough. The short version of the story so far: the Four Horsemen of the Apocalypse await their signal to ride to Earth, to essentially act as mediators in the inevitable final battle between Heaven and Hell. The Horseman War is tricked into charging in early, and faces trial for prematurely triggering the Apocalypse. 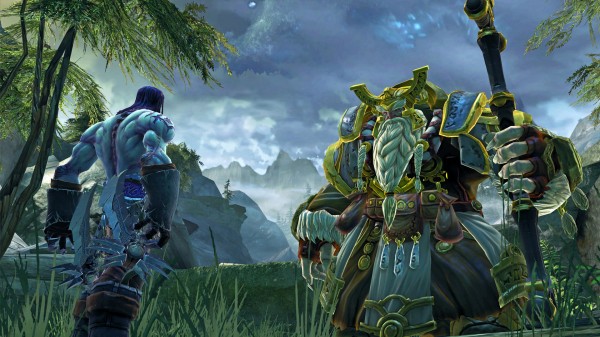 It sounds like an interesting story, a unique take on the well-trodden Apocalypse scenario. Unfortunately it plays out like the gothic-fantasy equivalent of contacting your phone provider, and being shunted around to different departments before someone helps with your query.

Apparently being the literal Death incarnate isn’t enough to command respect from the bureaucracy of the undead, meaning much of the story is comprised of thin excuses for fetch quests. Thankfully, the action taking place around the quests is damn fun. 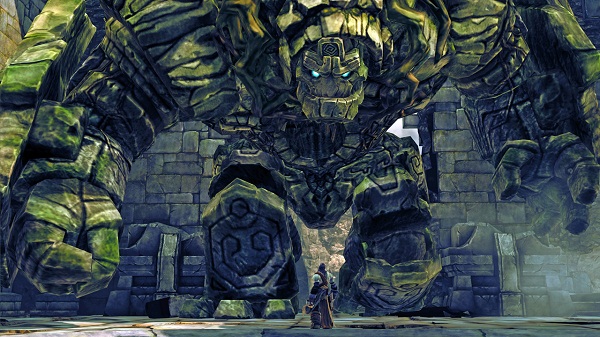 Gameplay
The mechanics of Darksiders II are generally polished and satisfying. It’s made up of very fluid climbing and platforming, mildly-challenging environmental puzzles, fast-paced combo-focused combat, and deeply detailed systems of equipment and skillset management. The whole thing is cobbled together into a cohesive – if not very original – package.

The parkour platforming is pretty Prince of Persia, with Assassin’s Creed influences. The combat is extremely reminiscent of God of War or Devil May Cry. The 3D Legend of Zelda games are an unsubtle inspiration for the environmental puzzles, as is Soul Reaver, which also feels responsible for the general atmosphere and character designs. Some of the bigger bosses even conjure memories of Shadow of the Colossus.

In fact, there’s very little of Darksiders II that we haven’t seen before. Does it matter? That depends how sick of this kind of game you are. Most of what the game does, it does well.

The character controls are slick and satisfying, which is an ideal place for platformers to start. If the most basic of movements are enjoyable, the character’s abilities can be expanded upon with confidence. As a result, the platforming and climbing mechanics are incredibly smooth, as Death effortlessly scales surfaces, leaps ledge to ledge, wall-runs, scampers up poles and skips merrily along wooden beams. It might not be what a lot of players come to the game for, but I soon found myself looking forward to these sections more so than the combat. 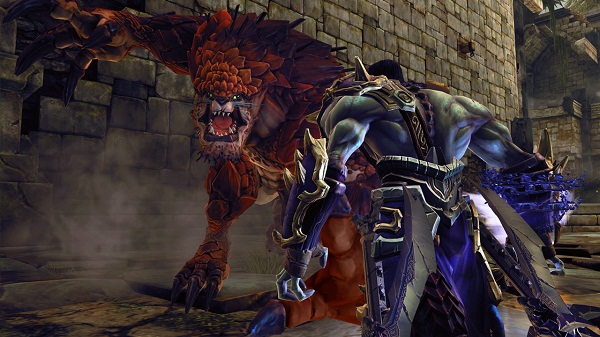 That’s not to undersell the combat. Traditionally, Death need only touch his victims to instantly kill them, but knowing that wouldn’t make for very entertaining fights, Vigil have taken some liberties with the character, making him proficient with scythes, axes, hammers and wrist blades. The result is a complex combat system, with a focus on stringing attacks into combos. X is your basic scythe attack, relatively fast with decent damage; Y attacks with your secondary weapon, usually either a slow heavy-hitter like an axe, or lighter, faster weapons like wrist blades. The left trigger locks onto a target, and the right bumper button dodges.

Stringing various combinations of X and Y attacks together forms the crux of combat, and there’s no shortage of combos to vanquish your foes. It sounds fine, but it quickly borders on ridiculous: according to the menu’s move list, there are no less than eighteen basic combos using only the X button. Press it once or twice for standard attacks. Three times performs a Double Slash (however that adds up), three times with a pause after the first will execute the Razor Wheel… yada yada yada.

Throw in at least that amount for the Y button, plus the multi-button combos, the evade attacks, and all the magical abilities, and you could study it all until the actual Apocalypse. Hardcore fans might insist that button-mashing isn’t a viable option, but in my experience, it’s not only an effective tactic, but the game almost actively encourages it. There’s no way you’re going to remember half of those moves in the heat of battle, so spamming X and Y usually gets you through. 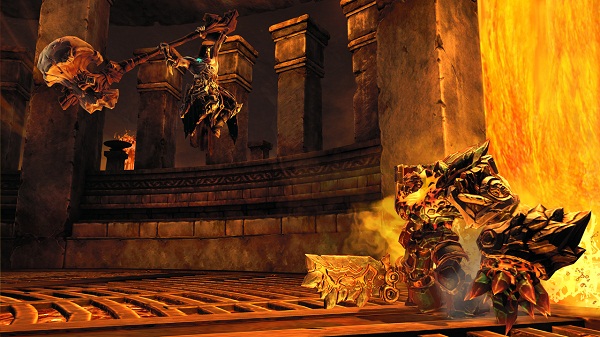 I found I enjoyed it a lot more once I let go of trying to remember everything and focused on memorizing a few particularly effective attacks. I soon developed a preference for the heavy weapons, which have a nice damage-to-speed ratio, and mixing that with some swift scythe action, Death lived up to his name. Once you get used to the flow of battle, darting between targets and laying waste to hordes of enemies at once becomes extremely satisfying – especially once Reaper mode is unlocked, on reaching level six.

The inventory system is similarly convoluted. I was initially put off by the number-crunching involved, but the interface makes it easy to compare weapons and decide which to equip. You’ll pick up a lot of stuff you’ll never use, but they won’t go to waste; a handy recycling system allows you to sacrifice unwanted items to increase the power of special “Possessed” weapons. Or you can always sell them to vendors. 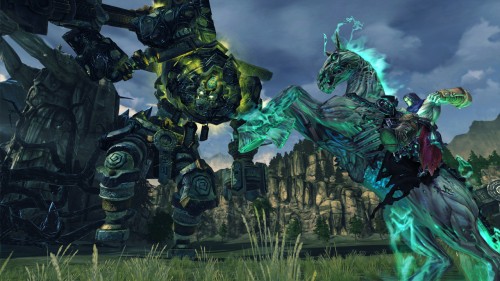 Visuals & Audio
New games this gen often manage to squeeze more power than expected from the aging hardware, and Darksiders II continues the trend. Beautiful, detailed landscapes are paraded past as Death journeys between icy worlds, lush green kingdoms, medieval-industrial castles, grim boneyards and dungeons galore. Although the dungeons become quite samey, the outdoor locations of each new world feel fresh, and are a pleasure to explore. It might not have as strong a sense of scale, or as much a focus on vistas, as something like God of War, but there are times when you’ll reach a high peak, and lose minutes letting your eye wander over the scenery.

We are taught early on that Death can interact with wooden beams, ledges, posts, etc. These are designed to stand out clearly from the rest of the environment, while still looking like they belong. Thankfully, you shouldn’t really hit that frustrating “where do I go now?” wall; with interact-able objects so conspicuous, the challenge is in the how, not the where. 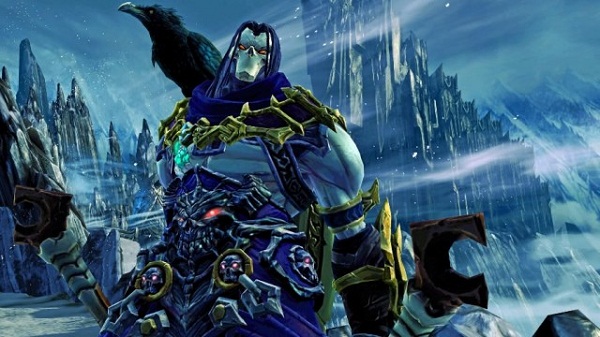 Character designs follow a comic book style – appropriate, considering there’s talk of translating the Darksiders universe to the medium. Death, his allies and enemies are highly-detailed but stylized, exaggerated but not mere caricatures. Animations, particularly on the bosses, are smooth and believable.

To be honest, I found myself barely noticing the accompanying soundtrack. Battle loops serve their purpose, but either aren’t too plentiful or sound very similar – it feels like you hear the same tracks repeatedly. Mercifully, they aren’t imposing, so the action on-screen usually drowns out any conscious acknowledgement of the music. When I did notice them, I found them to be not what I’d expect: they were exciting, often upbeat tunes, fitting but not typical of battle music in gothic-fantasy games.

Overall
For better and worse, Darksiders II cherry-picks its elements from a lot of sources. A game that combines the crazy combo-centric combat of God of War, the exploration and environmental puzzles of Zelda, and the fluid platforming of Prince of Persia, could be an exciting proposition.

The problem is, if you’ve already donated much time to its obvious influences, you might just conclude that everything it does has been done to… well, Death.