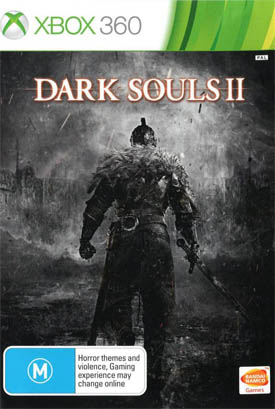 It is time to go beyond death. The latest instalment in the hugely popular, punishing and unique experience that is the Dark Souls franchise has finally made its way to consoles. Dark Souls II brings with it the sense of dread that the series is known for while trying to slightly improve on the formula. Some of these changes make for a better, more refined gameplay experience while others sadly don’t hit their mark quite as much. However, for anyone who is concerned; Dark Souls II is still very much a Souls game, and one that veterans and newcomers to the franchise need to have on their radar. 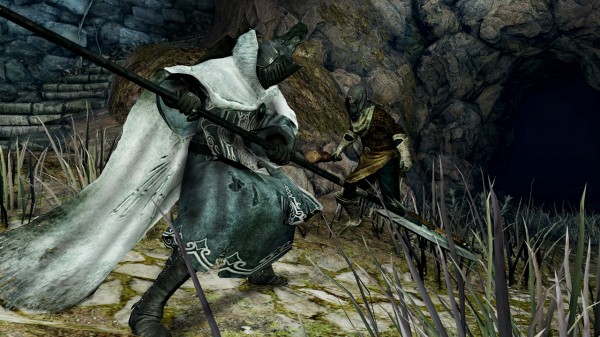 Dark Souls II is a game that is wrapped in mystery and intrigue. You start off as a cursed human who has died and made his way to this desolate place called Drangleic. From there you set out to hopefully cure yourself of the curse, but after it becomes apparent that it isn’t an option, your goal changes to becoming the next monarch of this wasteland and hopefully do some good.

The thing about Dark Souls II, and Souls games in general is that you are by no means spoon-fed story. You get a brief introductory cut scene and the rest is up to you to piece together. NPCs will offer very little insight into the goings on, only telling you bits and pieces that they know, which considering they are all slowly going mad is not that much. Most of the back-story comes from reading item descriptions. The items and weapons all talk about the gods that have risen and fallen in times past. It is almost like a giant puzzle just to figure out the story of Dark Souls II, and that makes for an amazing game.

Dark Souls II shares some strong connections with its predecessor, but for newer players this wont be a problem. The fact that story is contained almost entirely in riddles and snippets of information means that newer players wont feel like they are out of the loop when it comes to the series’ past. 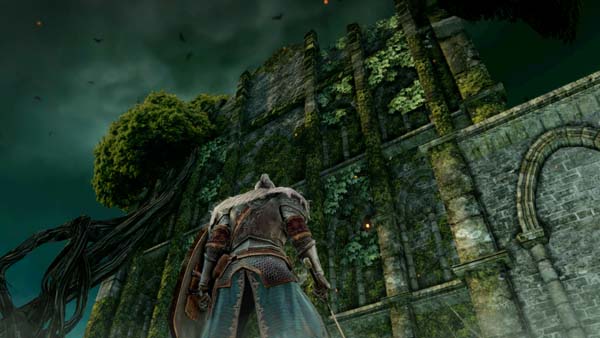 Dark Souls II comes from a rich line of action RPGs with deep mechanics that are designed to test players in every situation. It is difficult and rewarding experience that is unmatched by almost anything in gaming today. The frustration you will feel after dying to the same enemy in the same fashion time and time again can be almost demoralising, but that euphoric high you get when finally overcoming the obstacle is almost enough to make you want to throw a party over.

The difficulty curve this time around seems a lot more consistent, with no real areas that have a massive difficulty spike (ok well there is one, and it is a pain in the ass.). Everything else progresses pretty well alongside you to the point where you sometimes wont know the game is getting all that more difficult until you go back to those original areas and see how far you really have come. The only time difficulty becomes an issue is when you step foot into an area that you probably shouldn’t have hit just yet. The best part about Dark Souls II is that this can happen almost immediately, as the path that is directly in front of you is a little more difficult than the one hiding behind.

The choice is what gives Dark Souls II its life. You can choose which order to tackle enemies in. You can choose how to gear up your character, and you can choose if they are a nice guy or a colossal dick. Each of these choices is up to the player and while many don’t impact the game on any meaningful way other than the gameplay itself, the freedom to tackle obstacles any way I choose is something that keeps the series alive. 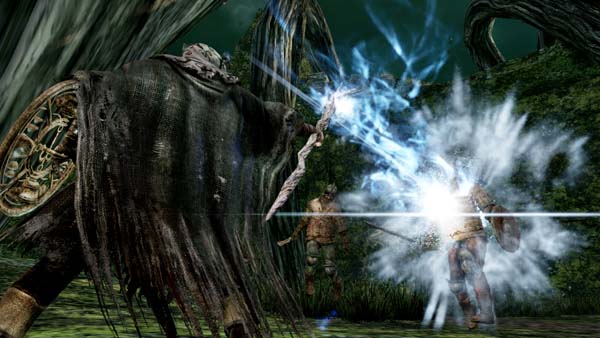 Controls have remained by and large the same this time around, if not a little more refined. Fluid and easy to grasp while still utilising literally every button of the controller means that Dark Souls II is definitely a game that is easy to learn but difficult to master. Players of previous instalments in the series will feel right at home, while the game’s little (optional) tutorial area will give newcomers a crash course in “How To Dark Souls.”

Character development is quite a robust experience this time around, allowing you to deck out your character with a variety of weapons, armor and shields; none being inherently more powerful than the other. By the end of my first playthrough, I had three shields in my inventory for different circumstances as I couldn’t find one that did everything I needed it to do. Players also get two extra weapon slots and two extra ring slots this time around so they can better prepare for more situations. While this is definitely helpful, as I got more and more into my character, I found myself only needing the two that were available in previous games. However, the strategic advantage of having three open slots for each hand is especially handy in PvP situations. 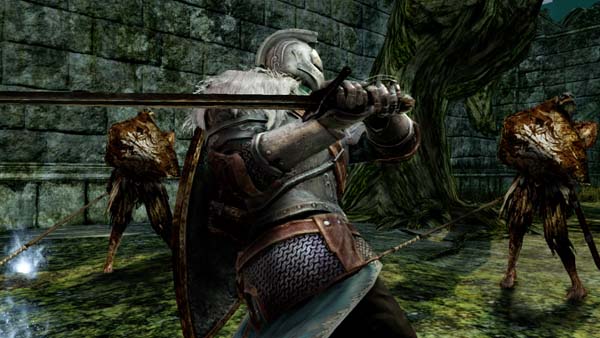 New Game + has always been a key component of the series, with each subsequent play through getting more and more difficult (up until about New Game ++++++++). Now this is still very much true, but New Game + is a vital part of the game. Every time you start a NG+ you will find yourself facing new enemies, discovering new content and unravelling more of Dark Souls II’s deep story. The fact that some bosses only drop their signature stuff after NG++ means that for the perfect build you just have to keep playing. This adds even more longevity to a game that is absolutely brimming with content, even during the first play through. Interestingly enough, some of the bosses act differently during later play throughs, like the infamous Looking Glass Knight who can summon online players instead of generic phantoms. Playing against a boss, and a human controlled character is an absolute nightmare and one that constantly has you on your toes.

The Dark Souls franchise has always created an amazing and unique online experience for its players, be it the way players can leave signs and warnings for other players (either helpful or harmful, depending on what kind of person you are) or invading other players, Dark Souls II keeps the online tradition alive.

Covenants make a return in Dark Souls II, but this time with a bit of scope and a lot more explanation as to what they are and how they work. Many covenants return from the first game, so if you are looking to “Praise the Sun,” then you can still do so. Some other covenants have you setting up traps for other unlucky players, or returning to the top of a Belfry to battle those who would threaten your bell tower. They really enhance the online play component to much more than just “Oh well, I’m being invaded now. Crap.” 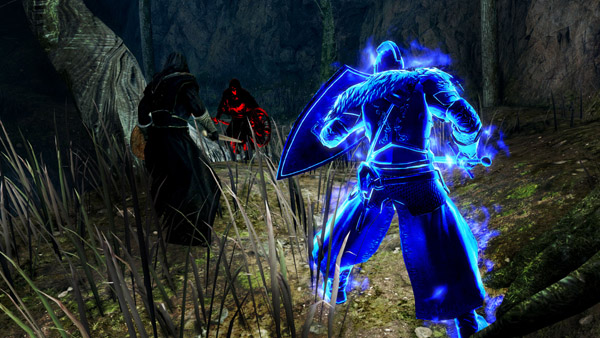 What is more impressive than the actual in-game components though is how the series manages to create an ever-evolving meta game. Due to its nature as a difficult, large game filled with secrets and no easy answers, game forums become flooded with players helping one another, and wiki’s pop up over night. This experience is something that while relatively common in gaming now, is almost an integral part of the Dark Souls II experience.

While Dark Souls II ticks many of the right boxes for its players, that isn’t to say that it gets everything right. Some of the changes made to the formula are sure to irritate and annoy many fans of the series. One of these is the fact that enemies now have a respawn limit. In previous Souls titles, enemies would respawn every time you entered an area or rested at a bonfire. Now after a certain amount of kills, enemies don’t return. This has two massive impacts on the game; firstly you cannot farm souls for quick EXP as easily, and secondly it makes the game a considerable amount easier. One of the tricks of Dark Souls and Demons before it was to find out how to navigate your way through an area to the boss door as quickly and efficiently as possible. Now you can just kill the enemies a few times and turn your path into a straight shot.

FromSoftware have also made some changes to the levelling up system. Namely they have gone back to the original method from Demon Souls, where you would have to travel back to the main hub in order to level up by talking to a specific character. This shows itself to be far more inconvenient than anything else, and even though you immediately have fast travel to and from any bonfire that you have unlocked, having to travel back to Majula every time you want to level up breaks up the gameplay considerably. 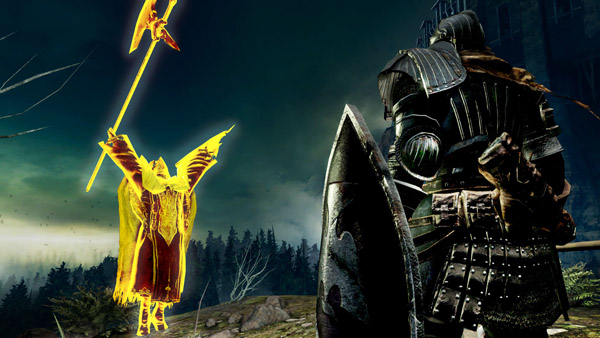 Dark Souls II is a visually impressive game. It doesn’t necessarily contain next-gen visuals or anything absolutely mind blowing up close, but where it really makes its mark is how many things there are on screen at a time, and how far away draw distances are. Standing on one end of the map and looking out to a castle in the distance and thinking “That is where I’m headed.” Is a great feeling, and it is even better when you do that and see the glowing green orb that shows the last point you died sitting miles away.

I was a little disappointed with the enemy variety this time around, especially from the bosses. It might just be because I am so used to the franchise, but I didn’t have nearly as many “what the hell is that!?” moments as I did during either Demons or Dark Souls. Many of the bosses were large knights or humanoids that followed largely predictable and readable attack patterns. While there are a few unique challenges, and one surprise from the past that players are sure to go nuts over, most of the bosses just felt like they lacked that Souls vibe. 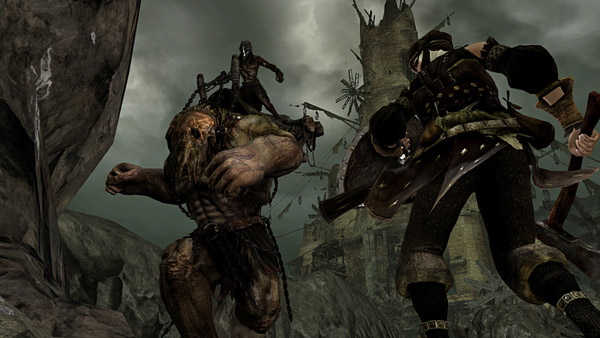 The original Dark Souls had a particular area; Blighttown that was an absolute nightmare for players due to its consistent and almost violent frame rate drops. The guys over at FromSoftware have learned from their mistakes, and during my 80+ hours with the game, I only noticed something like one single minor lag. The rest of the time, the game played smoothly without any hiccups.

Music has always been a key component of the Souls games, and that is no exception here. The soundtrack is absolutely beautiful, and contains some incredibly harrowing pieces of music. Each boss has their own theme that perfectly sets up who they are and what they are all about. The interesting thing about it though is that you likely wont immediately focus on the music during your first encounters with the bosses. Entering a room seems to switch on a certain “focus-mode,” for players where they are locked into the action in front of them and it blocks everything else out. Regardless, the amazingly composed pieces really do pull these encounters together. 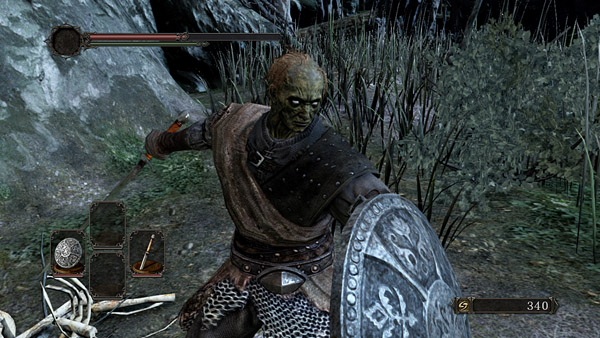 After a lot of players were concerned about the release of Dark Souls II, I think it is safe to say that many of those worries have been quelled. Sure, there are a few changes to the formula that don’t quite hit the mark as well as it should, and a few repetitive boss fights don’t quite contain the scope of the original game. Regardless, Dark Souls II offers a rich, difficult experience filled with secrets, riddles, puzzles and a wealth of content for players to enjoy, and honestly the game’s few nagging issues don’t detract all that much from the overall experience that the game presents. 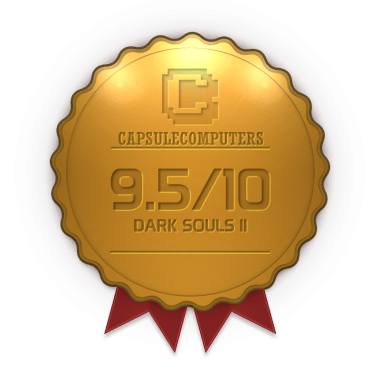