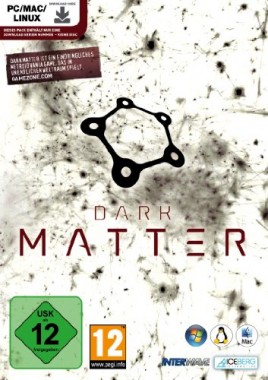 Dark Matter is a 2.5D platformer. Our hero, only known as The Ensign, wakes up to discover the crew of her massive ship is dead and a parasitic species of aliens now call it home. A mysterious AI has awoken her from seventy years of sleep and together they hope to escape from the ghost ship. 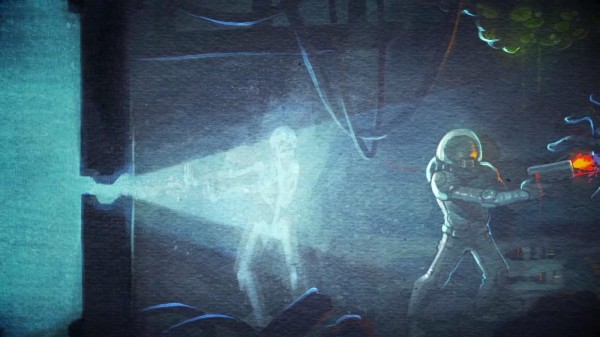 One A.I. survived the massive self-deletion after the ship was hit with not one, but two separate alien attacks. First, The Angels consumed the ship and left it in ruins. The survivors found themselves under attack soon after by the mysterious parasitic aliens. After a long and horrifying battle, the ship was overcome by the aliens. The last remaining AI searched through the med bays and discovered our hero The Ensign and wakes her from her slumber. The Ensign must work her way to the A.I. so they can escape the hell ship.

The story is told through by the A.I.’s recollection of the events and the diaries left by the crew in their dying days. The mood is grim and the desperation of the crew is apparent. Unfortunately, the plot gets a little lost near the end of the game. A final boss suddenly gets thrown in the way of the player and the game ends abruptly. Originally, the game ended with a confusing text epilogue. In a recent patch, the ending has been replaced with a full-fledged cut scene that quickly wraps up the plot in Dark Matter. It is a great deal better than the text epilogue. It does try to tie off a lot of loose ends in a short period of time but does little to make the ending any less abrupt. The crew diaries are probably the best part of the storytelling in Dark Matter and it is an utter shame there are not more diaries. 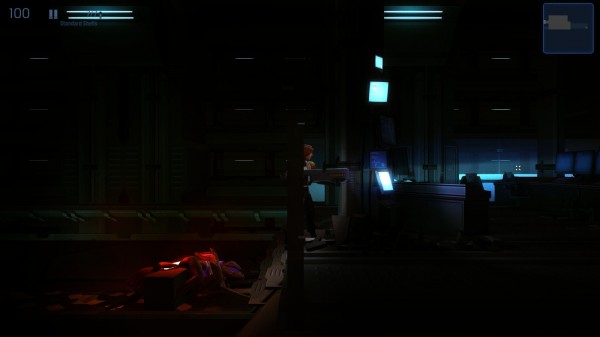 Dark Matter is a platformer with a horror theme and an emphasis on exploration. The exploration mechanics will have players wandering around the claustrophobic hallways. There are lots of side paths to explore, but unfortunately everything is spread around so far apart, players will spend a lot of the game wandering around the ship with very little to do. The Ensign does not move very fast and has an extremely limited stamina bar for sprinting. I found the map to only be helpful half the time. It will show the rough direction where The Ensign needs to head to, but will give leave the players to wander around the halls until they find the connecting path.

Combat breaks up the monotony of wandering the halls once in a while. It is a shame that the combat is few and far between, especially once the player learns how to avoid triggering spawns. There were a few tense moments during the beginning of the game, but once players figure out that turning off the lights near enemy spawners prevents enemy from spawning, the game becomes a lot less tense.  Ammunition and med packs are created from resources enemies drop and were never really in short supply. The weapon mods weren’t particularly game changing and in the worst case scenario, the pistol has unlimited ammunition. It is a weak weapon, but it is still enough to slowly kite enemies while the player nibbles away at their health with the pistol from a distance. The combat did very little to ratchet up the tension and the fear expected in a horror game. 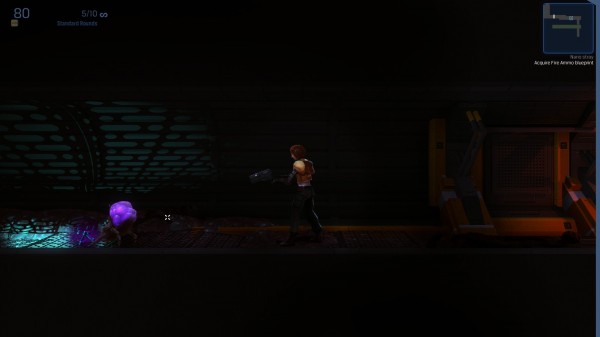 The puzzle mechanics are very interesting and are easily the best part of Dark Matter’s gameplay. Unfortunately, once they are mastered, they make the rest of the game very easy. Most of the puzzles respond to light sources. Players will need to shoot out light sources so they can sneak past alien spawners safely, open doors, and avoid exploding traps. Other traps will actually require the player to shine their flashlight on the trap to disable them. Woe was the day I discovered three traps requiring darkness right beside three requiring light! The remaining puzzles are classic fetch and flip switches types that will require the player to wander around and explore.

Dark Matter is plagued with bugs. Hit detection can be a little spotty at times and the enemy A.I. seems a little lost at times. It is advertised that the enemy A.I. will adopt to players tactics, but frankly I found the A.I. wandering around as if no one was around while it was clearly taking damage about 10% of the time. The ladders also suffer from some bugs that will not allow the player to climb them. Reloading the game usually solves those problems, so they are not of the game breaking variety. 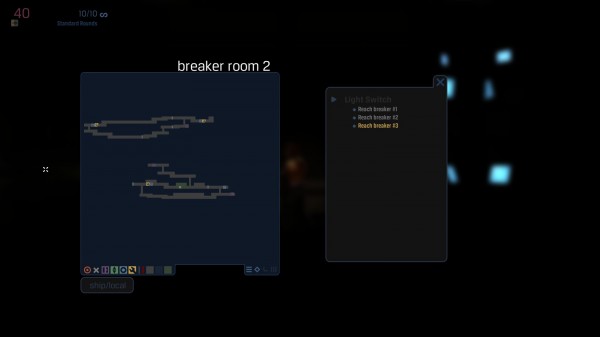 The controls are good when they work. The player moves around with WASD and aims with the mouse. Right mouse button is used for interaction. However, I found the ledge climb mechanic could get a little fussy and would randomly decide to stop working. Holding down right mouse button will bring up the aim mode, but I found it to be only marginally useful as the mouse point’s crosshair worked perfectly.

Dark Matter is presented in 2.5d. The game is played as a side scrolling platformer, but the graphics are all 3d. The environment is very well done. Even though one would imagine a spaceship to be a rather boring and monotonous environment, InterWave does an excellent job using the alien invasion to liven up the otherwise boring ship. The enemy design look great. The aliens are varied and actually look like they evolved for their purpose. I found the animations were probably the weakest part of the visuals. The reloading animations leave much to desire and The Ensign’s gait looks unnatural. There is a heavy emphasis on light in Dark Matter and InterWave pulls off the visual effects perfectly. Eerie shadows are cast as The Ensign’s flashlight shines into an area. 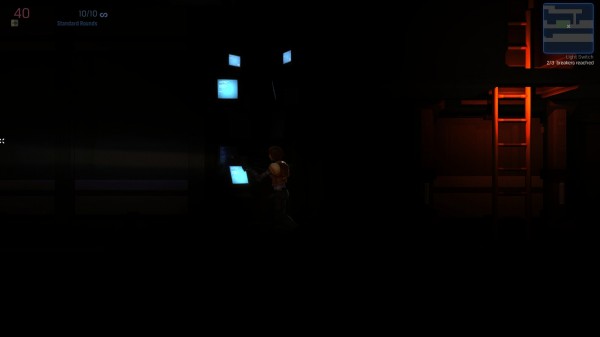 On the hardware side, the game ran smoothly. I did not encounter any problems while running Dark Matter on my PC. There are options to lower the graphics quality for slower computers, but the game lacks detailed control on tweaking the visuals. Instead, players will have to settle for general graphics settings ranging from low to ultra.

Audio makes and breaks the horror genre. Anyone who has watched a horror movie or played a horror game on mute will tell you it is a lot less scary without the music. Dark Matter manages to pull off a really eerie atmosphere. The music and background noise is kept to a bare minimum while exploring, which makes hearing the clattering sound of alien claws against the steel hull all the more creepy. The voice actor does an excellent job of giving life to the A.I. that guides The Ensign through her journey. He strikes the perfect balance to create a lonely and tortured soul with a slight hint of monotone. 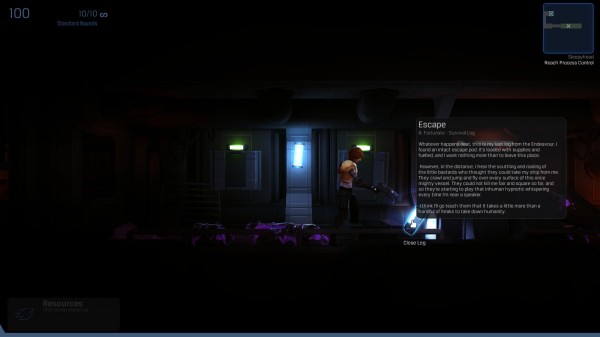 Dark Matter has some solid ideas behind the game. Unfortunately it fails in execution. The exploration aspect of the game ultimately is extremely boring and the combat does little to solve it. The backstory is excellent, but the actual story itself feels disorganized and the game ends abruptly. The graphics and audio are done well, but the game is buggy and is in need of a good patching. At $14.99, I have a hard time recommending the game.