Usually I’d say that I’m against a rogue, angry being taking over the world and becoming king, but damn these dark dots are cute. Even the vengeful ones. So here I am, saddling up for another iOS-sponsored adventure of cute, cartoon-ness and all for free!

So the game starts with a dark dot (now ‘Darkest of Terrors’) who is desperate to be king. This wannabe king dot has a team of darklings at his disposal that he wants you to help him use in this plan for world domination. Your team of darklings fire ahead of them at a consistent rate and you basically control their formations by drawing a shape and they quickly move into that. You can also pinch, rotate and drag them around the screen, which becomes necessary for dodging enemy blasts and manouevering around the screen. 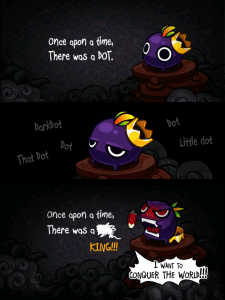 The gameplay is one of the more interesting that I’ve seen. To be fairly honest, I wasn’t expecting something with such an inventive and intriguing gameplay from a free game. Of course, while you can do crazy things, I found that I tended to grab a tactic and stick with it. I usually just made the tightest circle possible because that had the most punch artillery-wise, and it made it easier to dodge. Then I’d move into a broader formation for the ‘aether charging circles’. You basically need to have your formation cover all of the circles in the pattern (usually three or so) and if you stay on it for long enough you get a little mega-shot saved away for when you want to use it. 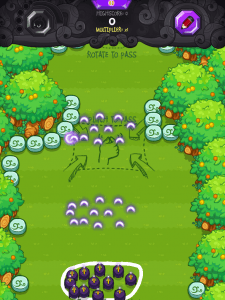 Dots in your formation can be killed pretty easily, if they come in contact with the smallest cloud they die, or if they get shot by one of the bigger clouds. However, you don’t need to have them alive for you to do things such as activate charge circles, or if you let a mega-shot off even the dead ones can help you out. Reviving dots is simple, there are hearts scattered throughout levels which automatically bring back dots, and (depending on the level) there can be several in one clump.

The game works on a rolling screen, so once you bypass a charging circle or clump of lives and they’ve disappeared off the screen you won’t be able to get them back. 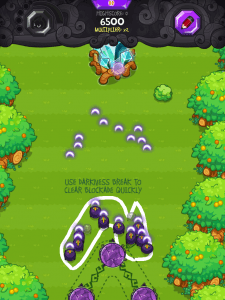 If you think this game sounds simple, well… Alright, it is. To begin with. There are only four levels in which you face up against clouds – or ‘elementals’ –the first stages is nice and easy, just a tutorial to get you into it, and from then on the difficulty gets markedly harder. The final level drops back in hardness, but that’s because the whole thing is designed for you to get some mega-shots under your belt so you can face the boss at the end. 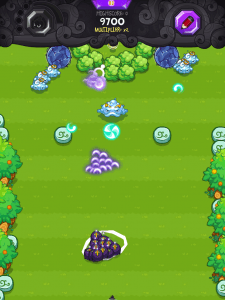 Now, most people won’t be able to complete it first time around (if you’re that person who can then good on you but move aside so the rest of us don’t feel as bad), this game is challenging and interesting enough to keep you playing it for a while. However, the main drawback is that there is only those four levels and once you’re done you’re just done. Barring those people who want to get perfect, awesome scores.

But, putting this up against the fact that the app is free? Well, it’s definitely worth it!

Visually the world is stylised, cartoony, and cute. It’s got the structure and look of just another iOS game, and if it wasn’t for the gameplay I would say there isn’t much setting it apart from other games. The graphics are good though, especially for the iPad, and I have no issue with the normal iOS cuteness, so I think it’s a good show.

Each level ends with loud evil laughter, letting you know that you’re not exactly fighting for the good guys. The background soundtrack is very minimalistic, so a lot of the time I forgot I was playing a game. I think this is good, but I’m the kind of person who loves playing with the game on silent. You will get the sound effects of lightning, dots dying, and you achieving things such as the charging circles. Oh, and there’s a nice little sound byte for when you die. 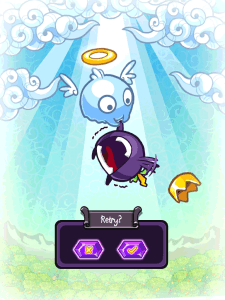 Dark Dot really is an awesome value for money (or no money! Mwahaha!). It’s a really interesting little app, and to be honest I’d be more than happy to pay for it if there were a couple more levels. But I’m happy with the length of the game, and it’s quite good for people who want a quick little game where you feel accomplished for finishing it because it’s just enough of a challenge but not too much of one to make it impossible.

I give Dark Dot