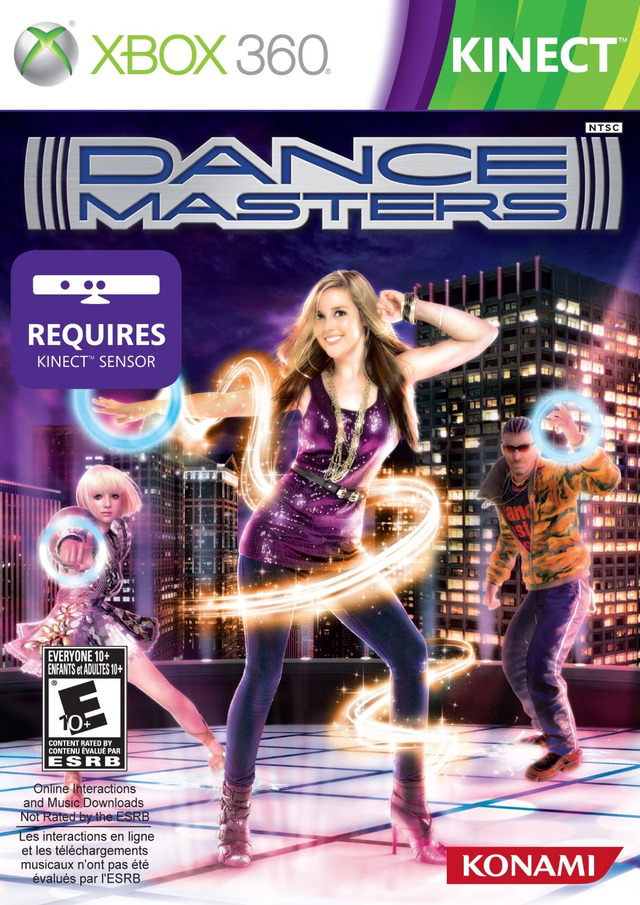 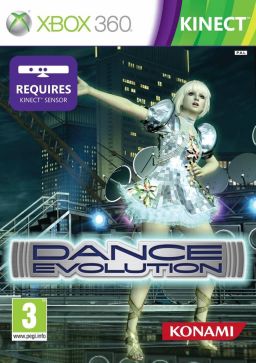 Overview:
With the release of the Kinect for the Xbox 360 it changed the face of gaming forever. There isn’t a need to have any controller, nor even a peripheral to interact with the game that you are playing anymore. Now considering your whole body can be used as a controller, many companies have taken it upon themselves to create a dancing game which requires the player to follow the motions on the screen with their own body.

Some of these companies may have a bit of knowledge as far as music games go, but none of them have the pedigree that Konami has. The creator of the widely successful Dance Dance Revolution series has jumped into the unexplored waters of the Kinect to release their first dancing game that doesn’t require the use of a dance pad/mat; Dance Masters.

Graphics:
It is evident immediately when you start to dance that Konami is well versed in a variety of different games outside of DDR. Character models are quite impressive to look at as you dance along (literally) to the music. Now every song that you will dance to has a set character that will dance to it, which means that players are not able to pick and choose who they want to watch dance. Despite the fact that backup dancers are not meant to be the main focus, even the backup dancers look good. They are not as well designed as the main dancer, but this is understandable.

The sets that you dance on are also pre-set per song, which means that there is little to no customization unfortunately, look impressive. There is a large variety of venues, all of which are very well detailed but it is still very unfortunate that you cannot select where to dance at. It is worth noting that all of the original dances from the Para Para song list feature the actual dance routines used by Para Para dancers in Japan. 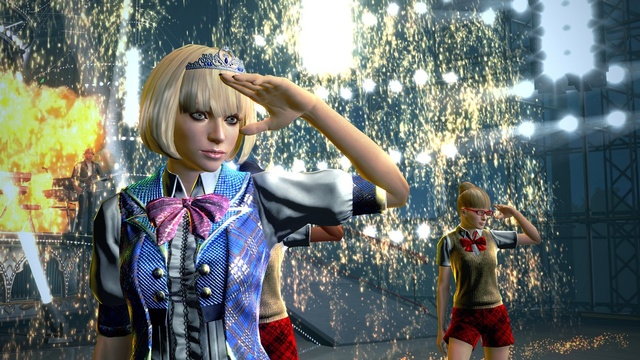 A feature that deserves mention under this category is the fact that Dance Masters will actually show you, the player, dancing next to the main dancer. This is not an outline of your body but rather a full color picture of yourself on the screen. This is quite impressive to see, though the picture itself can be very choppy and rough around the edges due to the nature of the Kinect. Players have the ability to even add different masks or hats to themselves, of which Dance Masters will do its best, though in my experience it varied greatly depending on item chosen, to keep above or in front of your face. Also this mode allows the player to record up to two separate live videos of their dance routine to add into their next time dancing to that song. This means that the next time you can try that song you could have three different videos of yourself dancing along with the main dancer. Then again if you are struggling to follow the routines themselves then your characters will of course look quite out of place.

Sound:
Now any game that focuses around dancing to music has to, of course, have good music to dance to. Konami has had quite a large amount of experience in this category as they have been developing music based video games long before Rock Band or Guitar Hero were even on the map. On the other hand, as Konami is a Japanese developer, quite a lot of the music that is featured in Dance Masters is music that you may never have heard of before.

Dance Masters lists a few different genres of music to choose from as you are selecting your songs such as: Para Para, Old School, R&B/Hip Hop, Club and Pop music. Now these songs themselves feature quite a lot of fast paced J-Pop style music and do not really feature artists that many people will actually recognize in the mainstream. However those who do follow Japanese music will be able to identify some popular dancing songs such as Night of Fire by Niko, Yesterday by Cherry and a number of different songs that have been featured in previous DDR games such as Burnin’ The Floor and Brilliant 2U by Naoki to name a few. 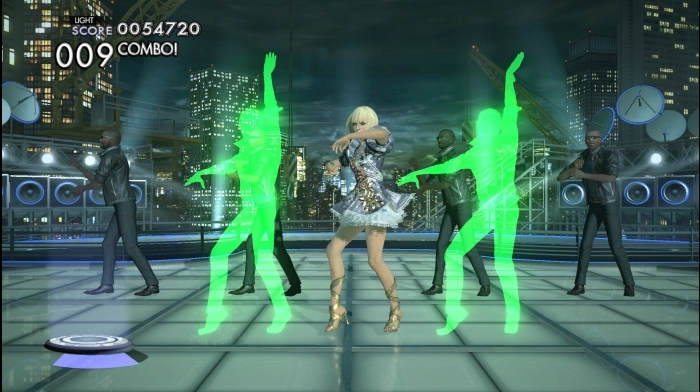 Featuring 30 songs total Dance Masters does have quite a variety of songs to choose from, although each of the songs are very fast paced and feature a BPM rating to show how fast each song will actually be. Even though many of the songs are from Japanese artists, all of them are in English so there is no reason to be concerned about not understanding what is being sung. So even though there are not a whole lot of songs that would be known by your standard dancer, anyone who has picked up a game from Konami’s Benami series will be getting exactly what they are looking for.

Gameplay:
As you start up Dance Masters, you will initially be asked to sign in via the facial recognition system. This is actually quite useful in this case considering the fact that if you are signed in properly, you will immediately see a video of yourself moving on the screen. Then you will have to navigate the menu screens using your hand motions.

Unfortunately the menu system is difficult to manage at first and the sensor seems to have trouble determining when your hand is placed up to go forwards or backwards depending on which arm you raise. Also there is zero support for the controller so the option of quickly navigating the menu through the controller isn’t an option.

Now once you make it into your song selection you will notice immediately that there are no notifications of what moves you should be performing during the song. Nominally it would be best to completely mimic the motions of the dancer on the screen, but the routines performed are very elaborate and can be difficult for those who have limited dancing experience. Dance Masters takes a page out of DDR when it comes to grading your performance and getting through a song. 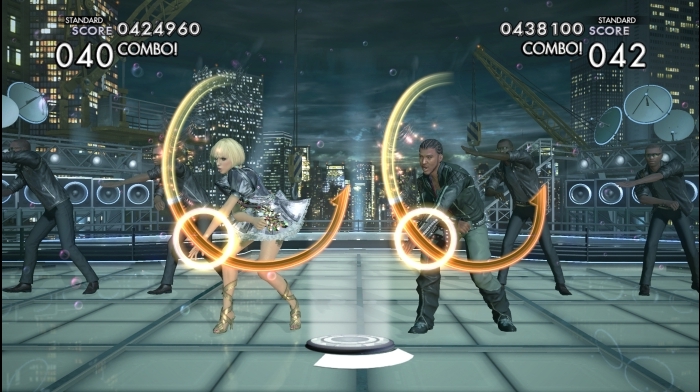 Rather than track your whole body during the dance, Dance Masters uses a variety of ways to grade your actual performance. Green outlines will show up to the sides of the main dancer and show a pose that must be met quickly and the better your body matches the pose, the better your score is. Perfect scores are worth the most, while Great and Good also add to your score. Completely missing a pose will result in a Boo that drops your score and breaks any combo you had.

Besides the pose matching, there are ripples that show up either in the air or on the ground. When a ripple appears it means that the player must put their arm or leg in the area of that ripple to receive points. Unfortunately the game only picks up the fact that some part of your body is in the ripple, meaning if you wanted to, you could use your right hand to hit a ripple to the left and so on. Finally there is a move that is similar to a tracking effect. A line with an arrow will appear that shows where the dancer must place their arm and then slide it along with the main character at a certain speed. This motion is probably one of the most interesting and difficult to fool compared to the ripples.

Now earlier I mentioned the fact that there are no previews to show what the player will actually be performing per dance, and every song will have unique moves. The routine doesn’t change however and once you play a song once, it is very easy to re-perform the same song and remember exactly what you will have to be doing. This means that practice makes perfect but it also can be off putting when your first try at a song has you failing badly.

Something unique to Dance Masters is the fact that you can dance side by side with your friends in the same room in a “dance battle.” As long as there is enough room in your house you can have two players dancing at the same time to either compete, or combine their scores at the end. Also there is an online multiplayer feature which will allow players to dance with others across the world, unfortunately when I took my dancing skills online; the dance halls were empty. 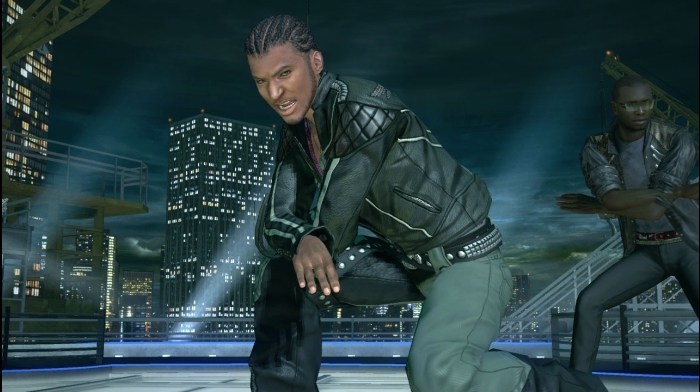 Overall:
Now Dance Masters has quite a lot to offer. Konami has clearly taken steps to make Dance Masters a new installment into their already well known dancing game archive. The routines that you can perform and will be able to watch are very intriguing and spectacular. Considering the fact that players will also be able to see themselves dancing on screen is interesting as well. Unfortunately for those who haven’t played a DDR game before or aren’t fans of J-Pop then you may find yourself disappointed as far as song selection goes and the lack of a preview mode can be daunting when you start moving your body to the music.

I give Dance Masters: