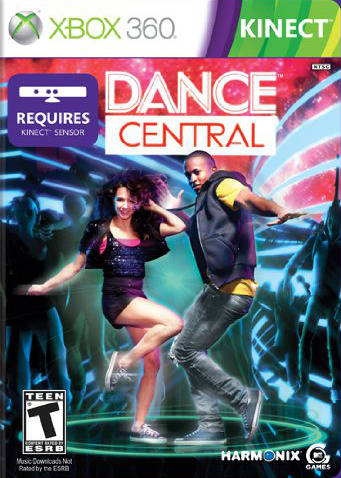 Overview:
Dancing has always been a large part of the human experience. Every culture has their own type of dances and some dances have been passed down from generation to generation. Then again there are also those who have literally no ability to dance and have two left feet.
But don’t worry about that at all because we have a brand new bit of technology that allows you to dance your heart out to some of the latest music. Using the Kinect’s motion sensing ability Dance Central looks to set the new standard for dancing games in today’s market by recognizing full body movements and providing a brand new experience to gamers of all kinds.

Graphics & Interface:
As far as graphics go there aren’t many bells and whistles to the experience as the core of the game revolves around mimicking the dancers on the screen. This means that the camera angle is fixed in position during gameplay to avoid any confusion as to what the player should be doing. The dancers themselves look good and their motions are very easy to follow and fluid, but that doesn’t mean that you won’t need skill to dance as they do. 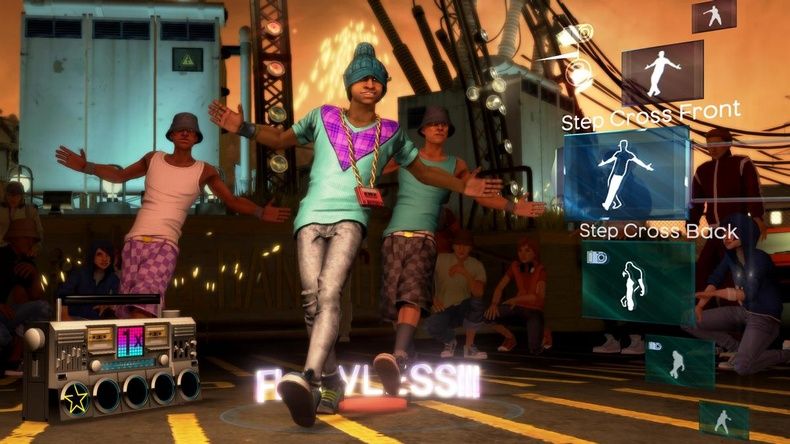 The user interface is designed to be very easily navigated with swishes of the hand to the left and right to select each time you want to select, and then moving your arm up or down to scroll through the menus themselves. This part is a bit frustrating due to the fact it is easy to scroll past something initially and select the wrong song, but this is just a minor issue that usually comes with inexperience and is later handled without trouble.

Sound:
Of course the best dancing game in the world won’t mean anything unless it has some great songs to dance to. But no need to worry as far as Dance Central is concerned. There is a large variety of songs that are provided to the player right off the bat. All 32 songs are available at launch which means that players will not have to worry about unlocking their favorite songs and can instead jump immediately in.

The songs range from older songs like “Brick House” and “Bust a Move” to newer songs like “Poker Face” and “Evacuate the Dancefloor” that provide a wide range of eras to choose from. There are hip-hop songs, electronic, R&B, and even just plain pop songs that one can dance to so whatever your preference they will have it in the game. Keep in mind however that some of the longer songs have been cut down slightly due to their length. 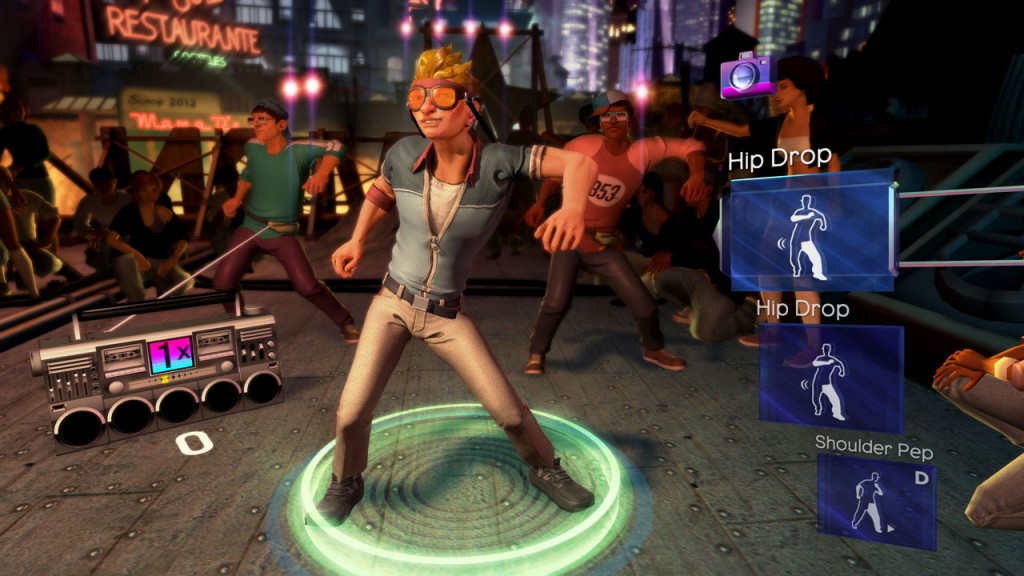 Another interesting feature that was launched alongside the game is a plethora of different songs available for download. These songs when downloaded go straight in with the rest of the 32 songs. It may feel a little cheap that songs were available for DLC at launch, but it at least provides the option to download new songs instantly.

Gameplay:
Of course the best part of Dance Central is the dancing itself. You will begin with selecting a song through the menu and proceeding to choose the easy difficulty. This reason for this is because you have to finish a song on easy before unlocking medium and so on. The difficulty is then stacked with the original difficulty of the song list. But that is just the way you manage to get into each song, what about the dancing itself?

As you begin dancing you will first notice that the majority of where your eyes will be focusing is on the right side of the screen. The reason for this is because there are cards along that side of the screen which show you the name of the move you will be performing as well as highlighting the parts of your body you will be using and showing you where they should be as you dance. Also you should pay attention to your dancer as you can also mimic the movements that they are performing. 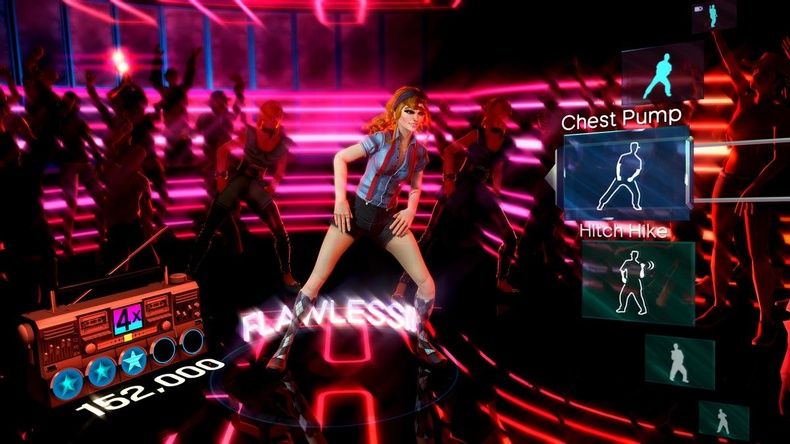 Another thing that you will notice, unless you have a really great dancing background originally, that you will do quite bad to begin with. I myself had a ton of trouble even trying the first song on the easiest difficulty. The best way to avoid multiple failures and frustration is to take advantage of Dance Central’s Break It Down mode. This mode will introduce each move in the dance routine for the song and allow you to practice them at your own pace. Each dance move has its own special name for easy identification too. The Break It Down mode is extremely helpful and allows you to easily transition yourself into the actual song once you are feeling brave enough. Then again there is also the option to skip this mode entirely if you are brave.

Inside of the performance you will be shown how well or bad you will be doing by looking at your dancer. This is handled by displaying a red outline along the part of the body that is incorrect on the dancer’s body. So this means if you’re legs are out of place for a certain step that it will show you exactly what you did wrong. This helps immensely as it allows the player to immediately correct their mistake opposed to just saying that they made a mistake but not saying where.

Your score is multiplied by the number of perfect techniques that you perform up until a multiple of x4 and you are rated via a five star system. But that isn’t where the fun is in Dance Central. Instead the fun is right there in the dancing itself. Dance Central features a multiplayer dance off mode where each player takes an individual turn dancing a routine, and then the person with the best score wins. Unfortunately there isn’t an option for two player dance routines or anything similar to that which is a downside as you will have to take turns dancing to beat one another. Another small mode of gameplay to take note of is the workout mode. This mode simply adds a calorie counter and a workout timer to normal play to show roughly how many calories all of your dancing has burned off. The mode itself doesn’t do much to expand the game itself but is a nice touch. 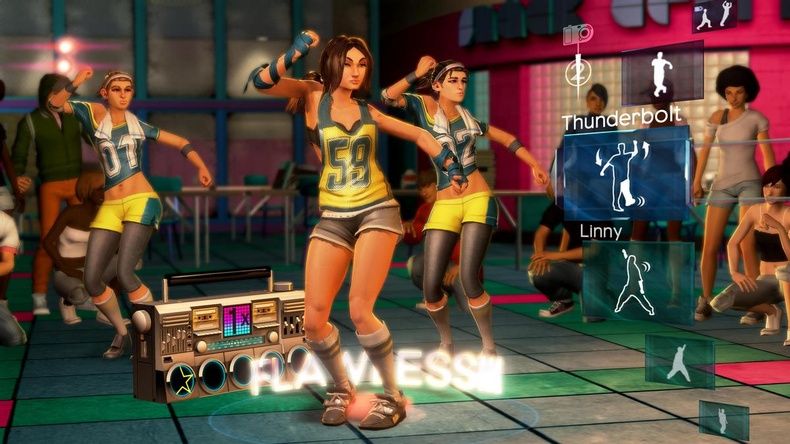 The Kinect itself reads the players movements extremely well and there are many instances that you will play through without a single mistake on the technologies part. That isn’t to say that the Kinect is flawless with Dance Central as it does make a mistake every now and again. There are certain times that the Kinect will not recognize a certain dance movement and this will cause a missed step even if it isn’t your fault. This isn’t a very common problem but it does happen nonetheless so prepare for an occasional hiccup.

Overall:
Dance Central is perhaps the best dancing game to grace the Kinect so far. There isn’t much to the actual gameplay besides dancing your heart out. There isn’t a story mode nor many multiplayer modes but it does bring with it a pure dancing experience. Dance Central will be a must have for party gamers and will definitely be a hit for friends to play against one another in the dance off mode. The song library is very large considering the amount of effort that players will expend in their dancing, but it would have been nice to not see launch day DLC as well.

I give Dance Central for the Xbox 360: